This article was originally published in the 1912 booklet published by the Illinois Central Railroad, Chicago and the Tourist. 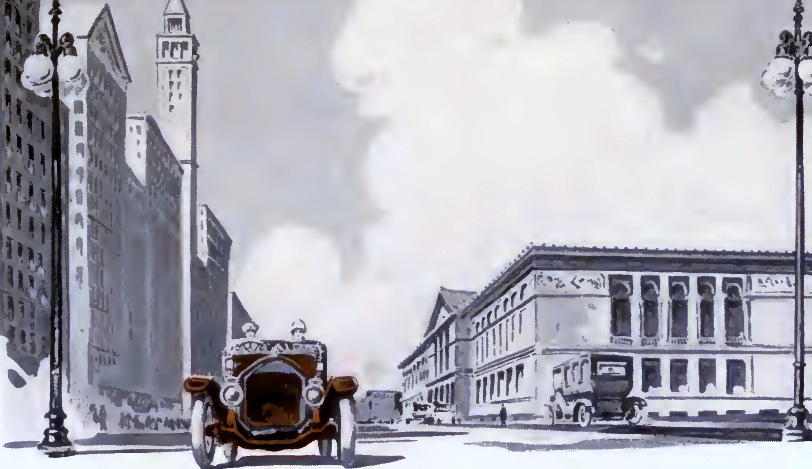 Chicago as a Tourist Point and Summer Resort.

That Chicago, the second largest city in population in the western hemisphere, and the fifth largest in the world, the city having a population in 1910, by the U. S. Census, of 2,185,283 that this western metropolis and “Great Central Market” should be visited by all tourists desiring to broaden their knowledge of the world and experience the pleasures that a city of such size affords, is a matter easily understood. There are exceptionally good local reasons why the summer time may be appropriately selected for such a visit; but, if there were not, it certainly can be no worse to tour Chicago than “to do” the various European cities in midsummer, as so many Americans are in the habit of doing. Nevertheless, it may not be quite so apparent why Chicago should be considered in the category of summer resorts. Delightfully comfortable days, with cool breezes and sunny skies, and a restful environment, combined with enjoyable entertainment and interesting sights and experiences, are not generally understood to be an adjunct of a large city in summer time. But such thought is erroneous in the case of Chicago. It possesses all, and more, of the qualities mentioned, as can be attested by the great number of its well-to-do families who from preference remain in their city homes during the heated term as the most comfortable place to be in at such time of all their travel experience, and also by the very considerable colony from the South that have for a number of years made Chicago their place of summer sojourn for weeks, and, in some cases, months at a time. The reasons for its possessing all and more of the qualities mentioned are manifold, but in a broad way they will be briefly epitomized in the following pages. First its location at the foot of Lake Michigan makes it a seashore city in every sense except that the waters that lave its shore are fresh instead of salt and there is no perceptible going and coming of the tide. 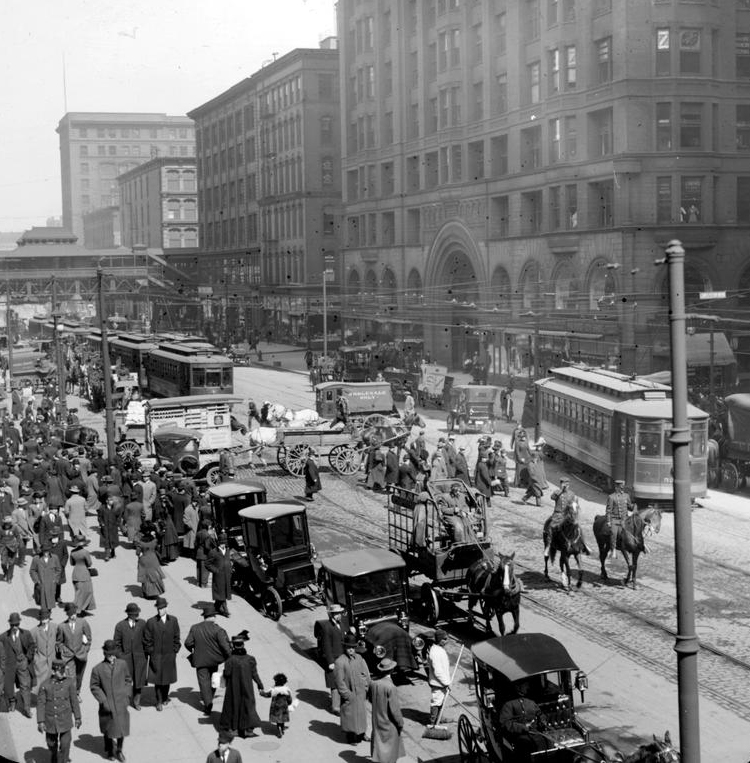 From its beaches and water front one looks out upon the same broad expanse and water-line horizon as does one at the Atlantic Coast resorts, and a pleasure trip on a lake steamer takes one out of sight of land as quickly, or even more so, owing to a low coast line, as is the case from any ocean port. For those who have never seen any of our mighty inland seas, it may help to a realization of their magnitude to remember that the greatest width of Lake Michigan is but eleven miles short of being the same as the rail distance between Philadelphia and Baltimore, and that its length is within four miles of the rail distance between Philadelphia and Pittsburgh; in other words, the lake is 84 miles in width and 345 miles long. 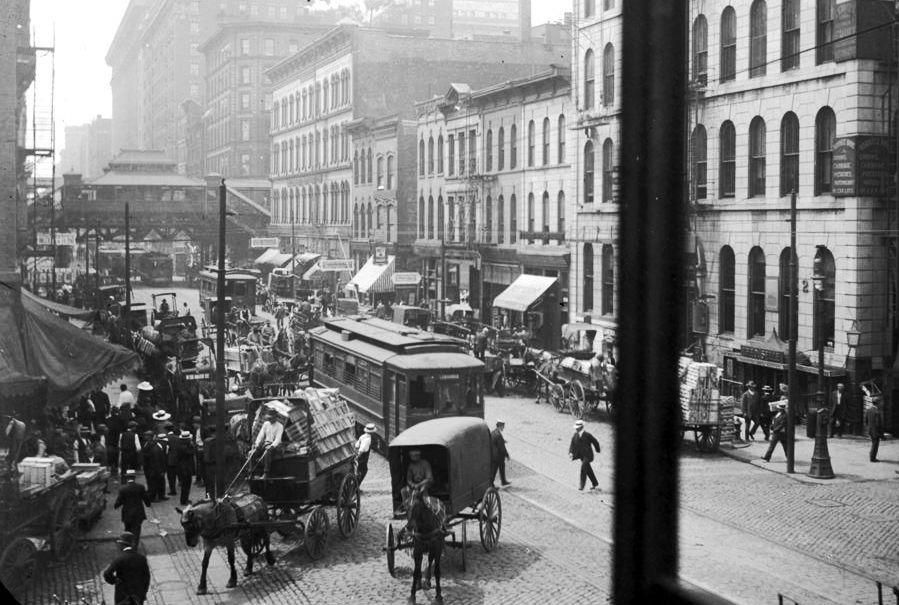 Supplementing the climatic influence of the lake is the vast outlying prairie country forming the land boundaries of Chicago, and also the territorial greatness of the city itself, for it is 191.6 square miles in area. Furthermore, in general characteristics, Chicago’s physical upbuilding has been on the open order principle, particularly in the residence district; that is, its streets are wide, a semblance, at least, of yard room prevails in the home districts, and scattered about in all sections are breathing spaces of varying size and nature. This last in addition to a wonderful park and connecting boulevard system, scattered through the three principal divisions of the city and aggregating 4,428.50 acres. Hence, it will be seen that all physical conditions combine to give refreshing breezes from all quarters a chance for free circulation and to make Chicago a comfortable city in which to sojourn during any portion of the summer. There is nothing pent up or enclosed about Chicago. 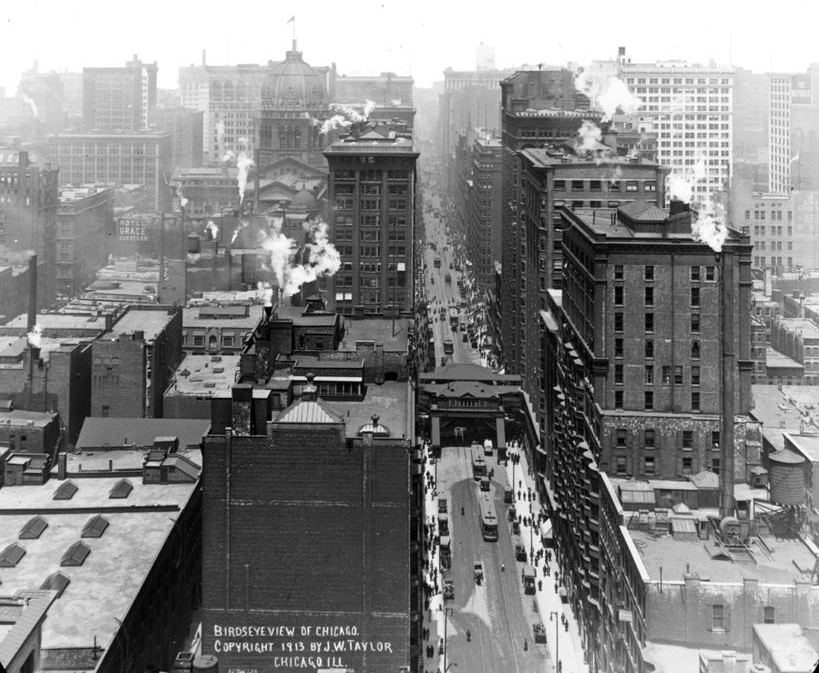 Dearborn looking north from Harrison in 1913.

A hint has been given in the preceding paragraphs of some of the causes that contribute to or influence Chicago’s summer climate. It may be truthfully stated in a general way that the bracing character of Chicago’s weather the year round is a potent factor in the well-known reputation of its people for vigorous energy and initiative; and that its summer season, as a whole, is characterized by a moderation of temperature, an utter absence of a dry heat, and a prevalence of a vitalizing quality in the atmosphere that serves as a tonic to make living in this great metropolis, even during midsummer, a comfortable proposition all of the time, and for most of the time a delight. Some “hot spells” do, of course, occur, but they almost invariably are of but two or three days’ duration, as shown by the records of the local weather bureau. Even at their worst, the heat waves have a modicum of vitality, and they seldom, if ever, succeed in causing a Chicagoan to lose sleep on account of unbearably hot nights. On the contrary, the nights as a rule are particularly cool and comfortable. 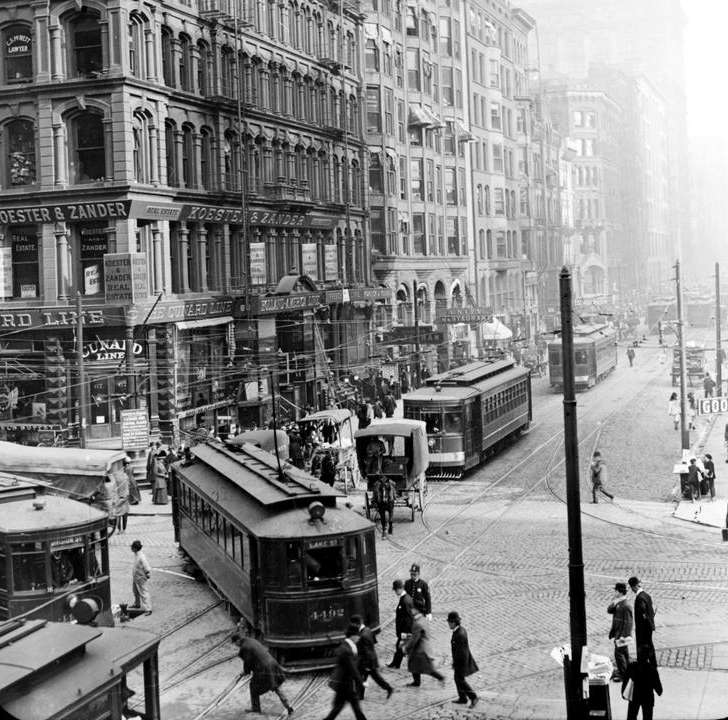 Randolph and Dearborn looking south in 1909.

In explanation of this general summary is the fact that mighty Lake Michigan serves as a regulator to Chicago’s weather. Does a hot spell begin to get near the annoying point, the wind shifts to the northeast and brings in a refreshingly cool breeze that dispels the torrid wave; for, as the temperature of the water of the vast lake varies much slower than does that of the land of the prairies, the air over the former is the colder and most dense, and rushes into the hotter and therefore more rarefied air over the land, causing a so-called lake breeze and an evening-up of the temperature. Probably the greatest gift and blessing that nature has bestowed on Chicago is its summer lake breezes. 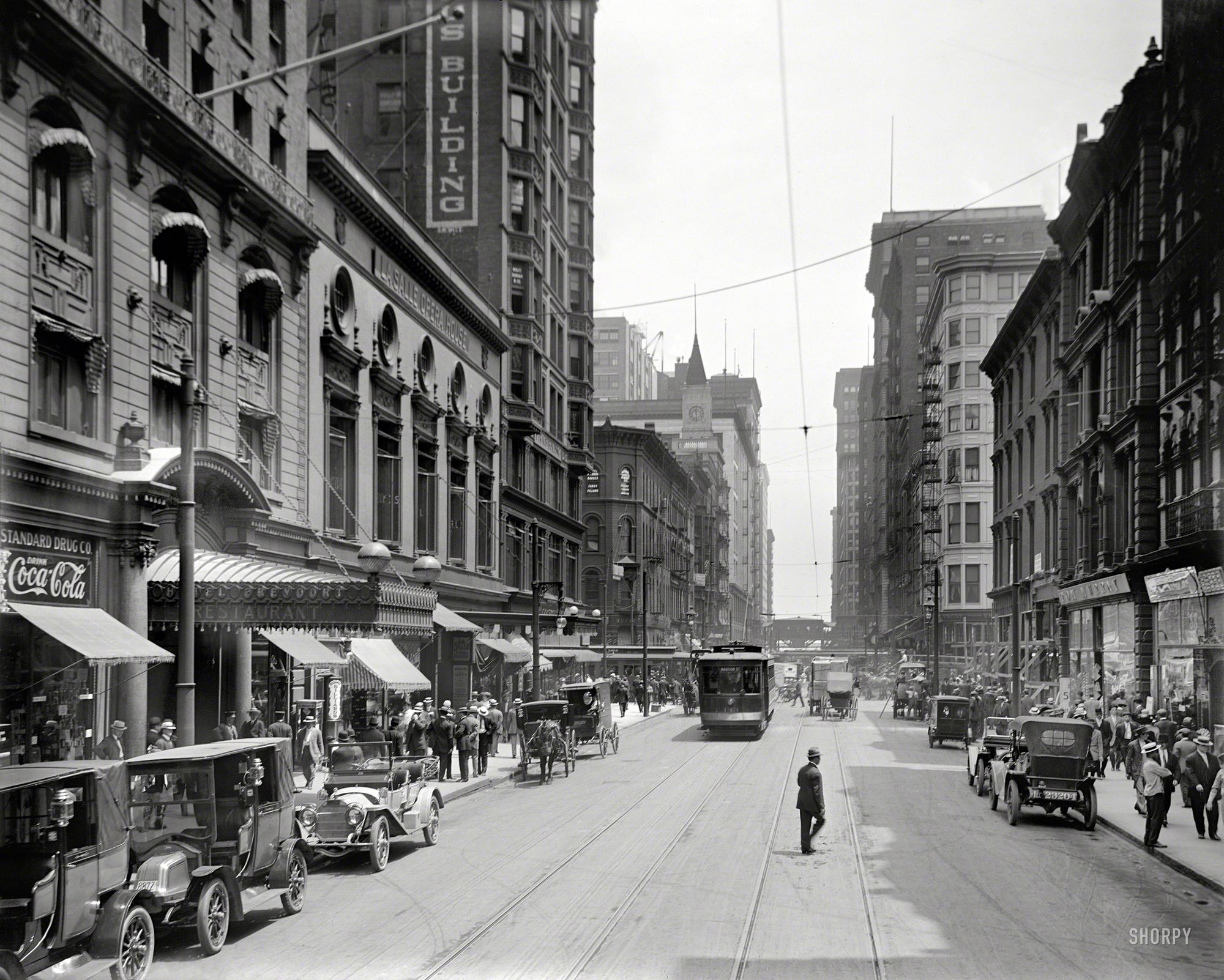 As a matter of fact and interest in this connection, the sudden and radical changes of summer temperature that are liable to occur in Chicago must be mentioned. A drop of the thermometer from fifteen to twenty degrees in less than an hour, although by no means a common occurrence, is what has taken place in the past and is liable to occur at most any time. Hence, for such and less marked, but more common changes, the tourist is cautioned to always bring a top coat or a light wrap with him or her to Chicago, even in midsummer.

Thunder storms, when they occur, are apt to prevail with characteristic Chicago energy, but they are not of excessive frequency or of long duration. The Weather Bureau statistics on this subject, for a recent average year, show that during the spring, summer and fall months there were five thunder storms each in May and September; seven each in June, July and August, and two in October. These thunder storms are one of nature’s most invigorating tonics, and are a factor in the prevailing delightfully cool days with which Chicago is blessed during the warm season. 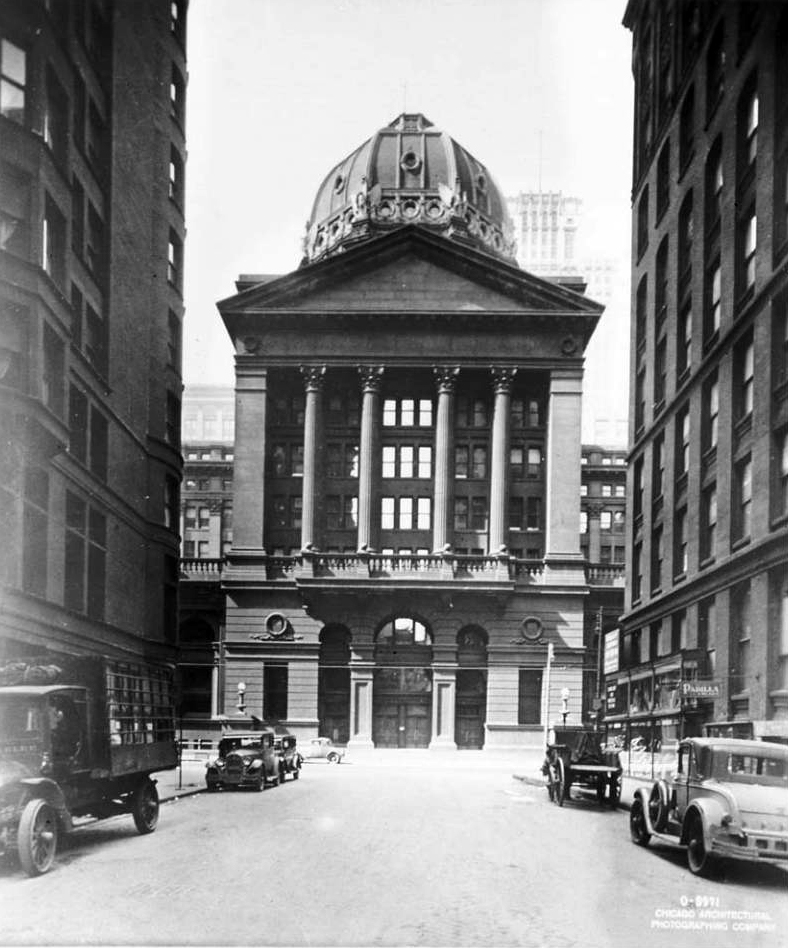 For the six months, May to October, inclusive October is generally a “beautiful” month in Chicago, although, of course, certain recreative out-of-door features are then out of season for the six months mentioned there was but one day each in June, July, August and September when the official registration of the thermometer reached ninety degrees or over, and the highest it registered in that time was ninety-two degrees, on August 11th and September 1st, respectively. During the same period the thermometer went as low as thirty-four degrees in May, the mean for the month being fifty-two degrees; in June the lowest registered was forty-seven degrees, with a mean for the month of sixty-six degrees; in July the record was fifty-five degrees lowest and seventy-three degrees mean; fifty-four and seventy-one degrees were the respective lowest and mean for August; September’s record was thirty-nine degrees minimum and sixty-five degrees mean, while those for October were thirty-five and fifty-three respectively. The mean temperature for the combined months of June, July and August was seventy degrees. That the year thus quoted for Chicago was not exceptional in the delightful average of its temperature is shown by the fact that in the published records of the Weather Bureau for that year, the mean temperature of the months June to October, inclusive, “differed from their respective normals by not more than one degree.” May was an exceptionally cool month.

As shown by the accompanying maps on pages 18 and 23 (below), the city of Chicago, with a lake frontage of about twenty-three miles, is divided by the Chicago River and its so-called north and south branches into divisions locally designated as the North, South and West Sides. In its length the city extends due north and south, and that one may form an approximate idea of its territorial greatness the following will be of interest. From the city’s northern boundary, due south to a point opposite its southern boundary, the distance is nearly twenty-six miles; north and south streets, such as Western Avenue, twenty-three and a half miles long. Halsted Street, over twenty miles long, and State Street, seventeen miles long, are in the city limits; the greatest width of the city is a little over ten miles, through which 87th Street extends due east and west for the entire distance. From what has been said, and a further perusal of the map, it will be noted that Chicago’s streets are laid out on the block system, eight full blocks to the mile, and that they run east and west and north and south, with a few exceptional avenues running diagonally. Hence, with the right angle block system prevailing in conformity with the cardinal points of the compass, it is easy to find one’s way about in Chicago. As a rule it is simply a matter such as “two blocks south and one east. 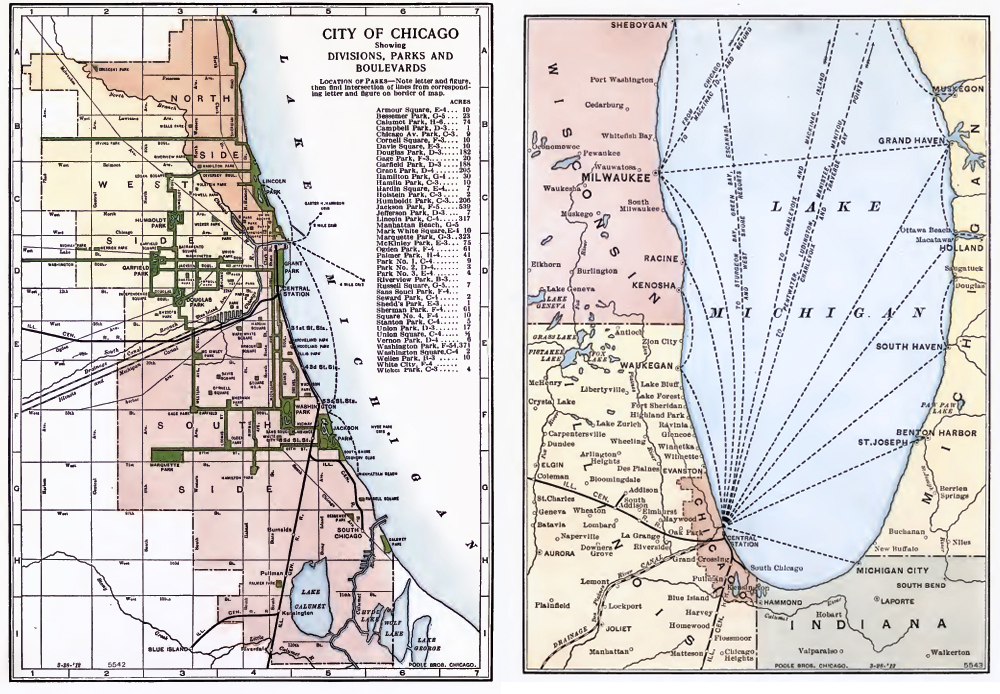 Broadly speaking, the following may be said of the three divisions of the city. The North Side is a residence section, in addition to having a blending, particularly toward the river and the west, of warehouse business and manufacturing. The West Side, in addition to its large residence sections and its considerable retail marts, is a great manufacturing district, and is also the section in which the great lumber interests are located; manufacturing, however, being also extensively carried on at various localities on the South Side, notably at West Pullman, Pullman, and in South Chicago, the great steel rolling mills being located at the latter point. The South Side, in addition to its manufacturing just mentioned, is the section in which the world-wide famous Union Stock Yards are located. It is also a large residence section and is the portion of the city in which is located the “down-town” or “business” section the section in which are the great banks, the Board of Trade, the Central Postoffice, Courthouse, City Hall, those veritable hives of commercial industry, the tall office buildings, the principal theatres, hotels and restaurants, the great wholesale and retail houses and the famous department stores. This, in short, is what may be called the heart of the city, and is the portion probably the most widely known and understood by the country at large. It is bounded on the east by the lake, on the north and west by the river, and its present congested part ends, just at present, on the south at an indefinable “somewhere” between Van Buren and Twelfth Streets; although the entering wedge of the overflow further southward is clearly defined by “automobile row,” extending beyond Twenty-Second Street on Michigan Avenue. 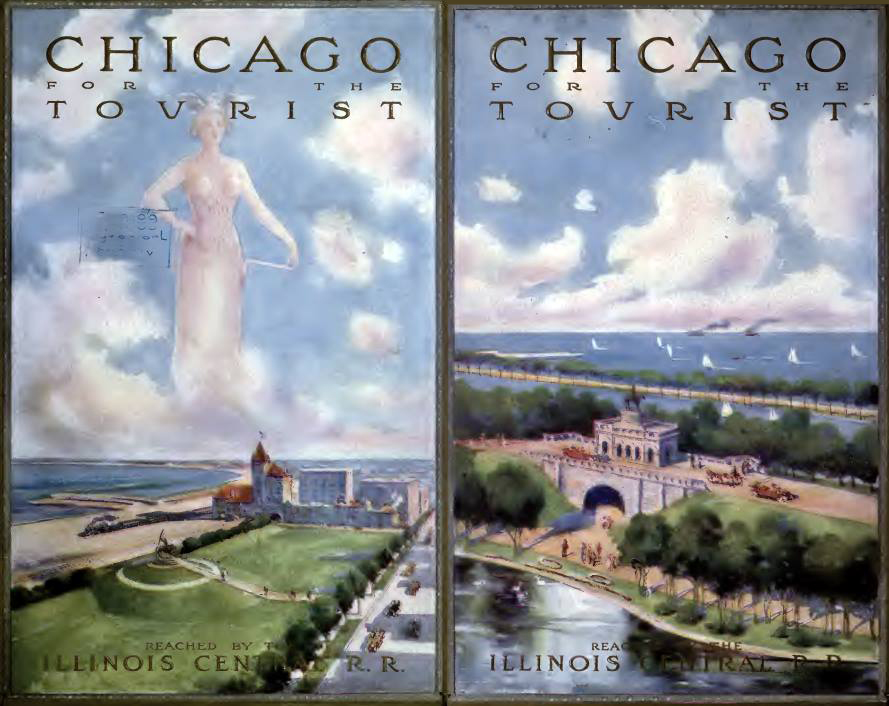