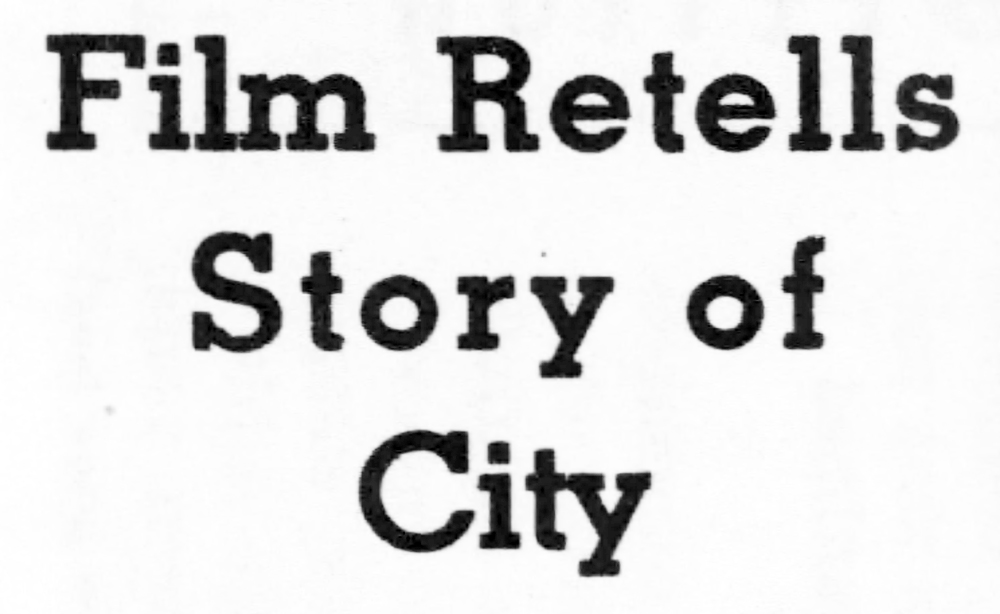 FIVE HUNDRED THOUSAND dollars’ worth of ashes is what Twentieth Century-Fox studio has to show for eighteen months of research, three months of construction work, and eight weeks of camera production on its as yet uncompleted picture spectacle, “In Old Chicago.” 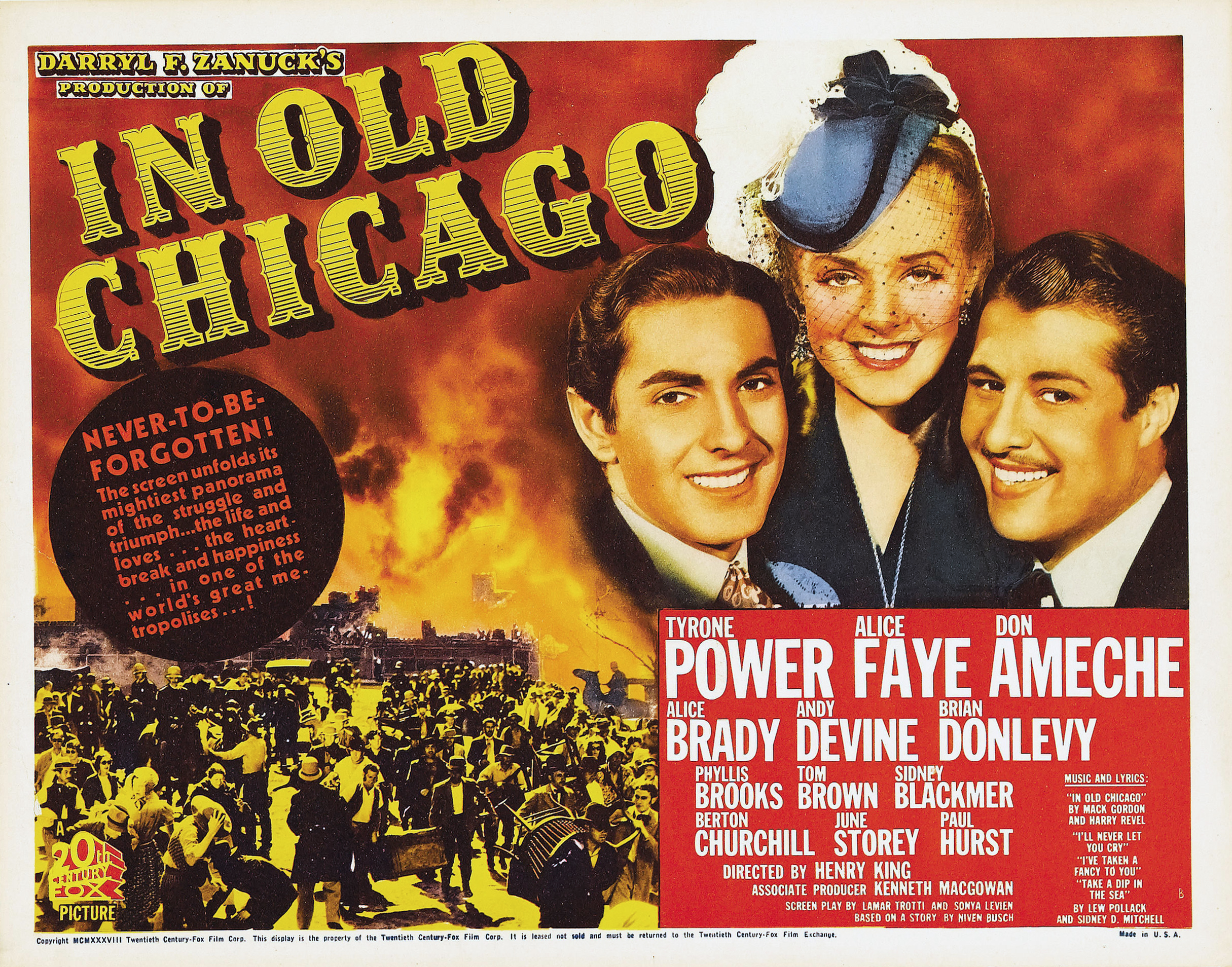 That much money is what the studio expended to build Chicago of 1871, and then to arrange, with special effects, to burn it down.

The $500,000 fire broke out in eight or nine different parts of the studio’s 200 acres over recent weeks. Each time the blaze broke out it was carefully supervised by Los Angeles county firemen and “fought” it by fire engines of ancient vintage, with the studio’s own mechanized super-fire apparatus of 1937 standing by to quench any blaze that might really get tough. 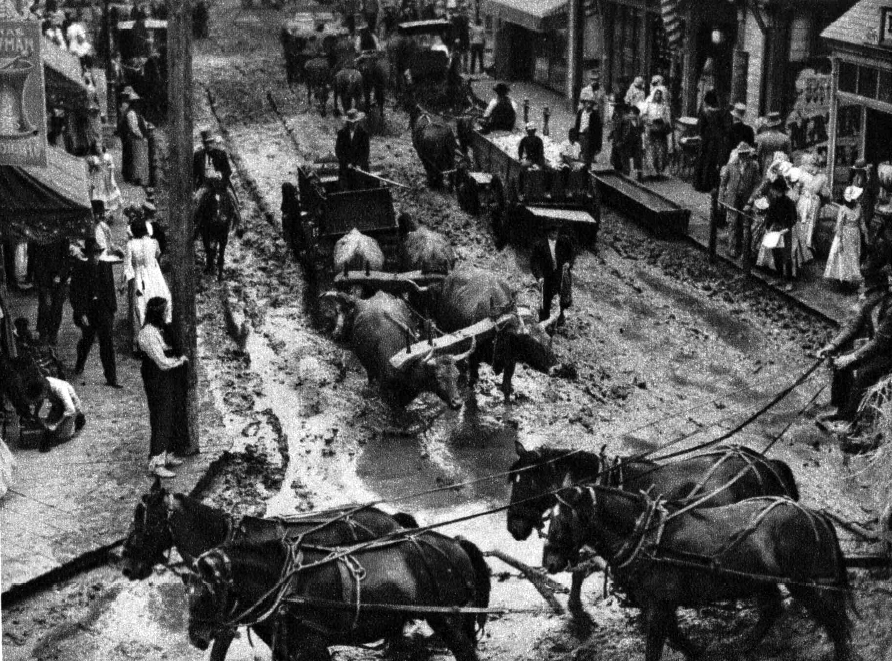 For the prolog of “In Old Chicago,” the city of 1854 was reproduced. This is Dearborn street of that period as the movie scene builders have reconstructed it.

Few pictures ever attempted by Hollywood represent so painstaking an effort by reasearch to patch together so much and such authentic detail. The studio had its head researcher, Rudolph Sternad, working for weeks under the suggestion and with the cooperation of the Chicago Historical society. But Sternad’s trip to Chicago merely represented one high spot in about eighteen months’ work. A staf at the studio had been collecting, discarding, and indexing material for that long in advance of the first camera work under Dlrector Henry King.

Dead newspaper type and faded prints were culled to reo create buildings, streets, and wharf scenes that had not been seen for sixty-six years. Long before the scenarists, Lamar Trotti and Sonya Levien, went to work preparing their script from the Niven Busch story, “We, the O’Learys,” the studio library had collected stacks of documents and pictures covering the period.

Two old-time Chicagos had to be built. Both arose on the 110 acres of ground adjoining the Movietone City plant of the Twentieth Century-Fox studio, which bought the new acreage last year from a golf club in order to have sufficient room for the mushroom growth of such a dynamic place as Chicago in its early days. 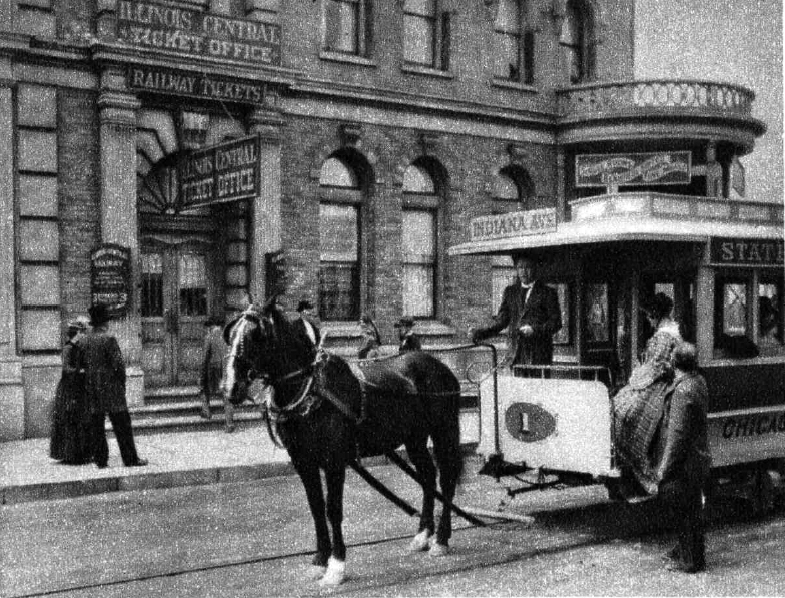 The Illinois Central ticket office of 1871 a. it appear. in the film. In the foreground is the horse car employed in the picture.

At first streets were laid out to conform with the Chicago of 1854. Gradually there rose a sprawling web of dirt streets, with board walks, horse troughs, frame front buildings, stables and sheds, inhabited by gentlemen in tight pants, sharp traders, wagoners, ruffians, women with funny-cut jackets, and dignified men with tall, fuzzy hats. In this 1854 version of the mushrooming city the prolog of the picture was filmed. Through its muddy byways rumbled the wagon bearing Alice Brady, portraying the newly widowed Molly O’Leary and Molly’s three stalwart young sons.

When the prolog sequence had been filmed the sets were rebuilt to match the changes wrought by seventeen years of Chicago’s astounding progress. Dirt streets were covered with a pebbly asphalt composition or relaid in cobbles. Tracks for horse cars were laid. One complete horse car line, with service consisting of one car, No.1 of the “State and Randolph line,” made a complete circuit of four blocks. In its four-block length this car line passes some thirty- four different buildings. 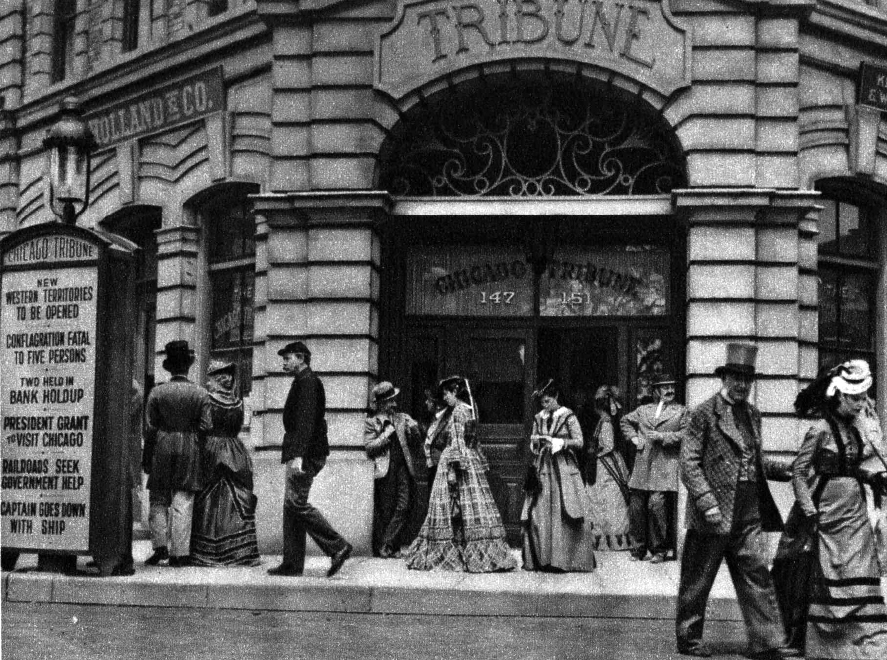 The movie reproduced the Chicago Tribune building of 1871, which stood at the southeast comer of Madison and Dearborn street. This is a scene from the film “In Old Chicago.”

The headquarters of the Palmer house, the Field, Leiter & Co. store, The Chicago Tribune, the old Rice theater, the Manor house, the city hall, the Adams Express company, the Illinois Central, the Goodrich Shipping company, the Nineteenth Regiment armory, Benziger’s bookshop – all these, and hundreds more of the edifices which landmarked the Chicago of 1871, were transformed or erected. The city hall was in stone.

A triumph of the scene builder’s art was the construction of a lake containing 1,865,000 gallons of water. This artificial lake, intended for the closing scenes of terror, will in the finished picture receive the refugees from the great fire when they fiee into Lake Michigan. A bascule bridge was built over the Chicago river, which flows for a couple of hundred yards, with quays, warehouses, and grain elevators on its banks. The bridge will go up when the big scene comes, to drop luckless fugitives into the water.

Altogether seven sets of heroic proportions have been put up for the picture. The one which had some eight or nine blocks of an actual city represented in its two and three story frame and brick construction is the largest scale effort of the kind seen by this observer in thirteen years of covering Hollywood.

Another of the seven sets provides a reproduction of “the Patch”—tough section of old Chicago—on the studio’s north lot, more than half a mile distant from the “city of 1871.” It covered five city blocks, including the house and shed at 137 De Koven street where the cow kicked over the lamp (if you take your history the way they are going to give it to you in this film).

But there are still more sets of old Chicago scattered in the ravines or up the sides of the knolls that dot Movietone City’s expanse of “back lot.” Some of them it was not necessary to burn, because the fire had already raged so long and extensively that their ashes were not needed. 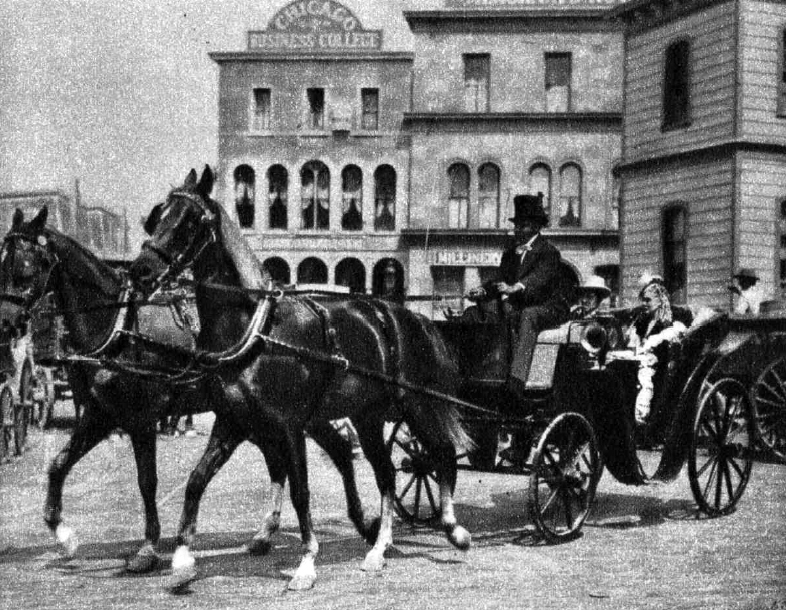 Thirty years before automobile. A Randolph street comer of “In Old Chicago.” In the carriage are Tyrone Power and Alice Faye.

A vast painted panorama of shops, roofs, and chimneys was erected outdoors on what had been the fourteenth green of the Westwood Hills golf course before the studio bought the links to build Chicago. The burning of this 100 yards of outdoor murals undoubtedly was the most costly billboard bonfire in the country. But it made a great and realistic shot. To film the scenes of the fire crossing the river, the fugitives fleeing for the lake, and the roaring inferno t hat was Randolph, Washington, and State streets in October, 1871, the highest “parallels” ever used in picture production-four towers 165 feet tall- were erected. along the shores of the “river” and “lake.” It then was discovered that a barge would provide too unsteady a support for the battery of ‘three cameras and tiers of sun arcs used in scanning the disaster from the water front, so a “dolly” (camera on wheels), operating on tracks laid in the lake bed, was built.

The interior settings were scattered through five of the studio’s sound stages. One, illustrating the interior of the Nineteenth Regiment armory, was used as the scene of a great brawl in advance of a Chicago mayoral election between two fictitious candidates, Gil Warren (Brian Donlevy) and Jack O’Leary (Don Ameche), O’Leary wins the election, according to the film, largely through the shrewd conniving of his brother, Dion O’Leary (Tyrone Power), who s e political manipulating Jack had mistakenly supposed to be on the up and up.

Fifteen fire engines of an age and appearance fitted to 1871 were mustered for the great fire. 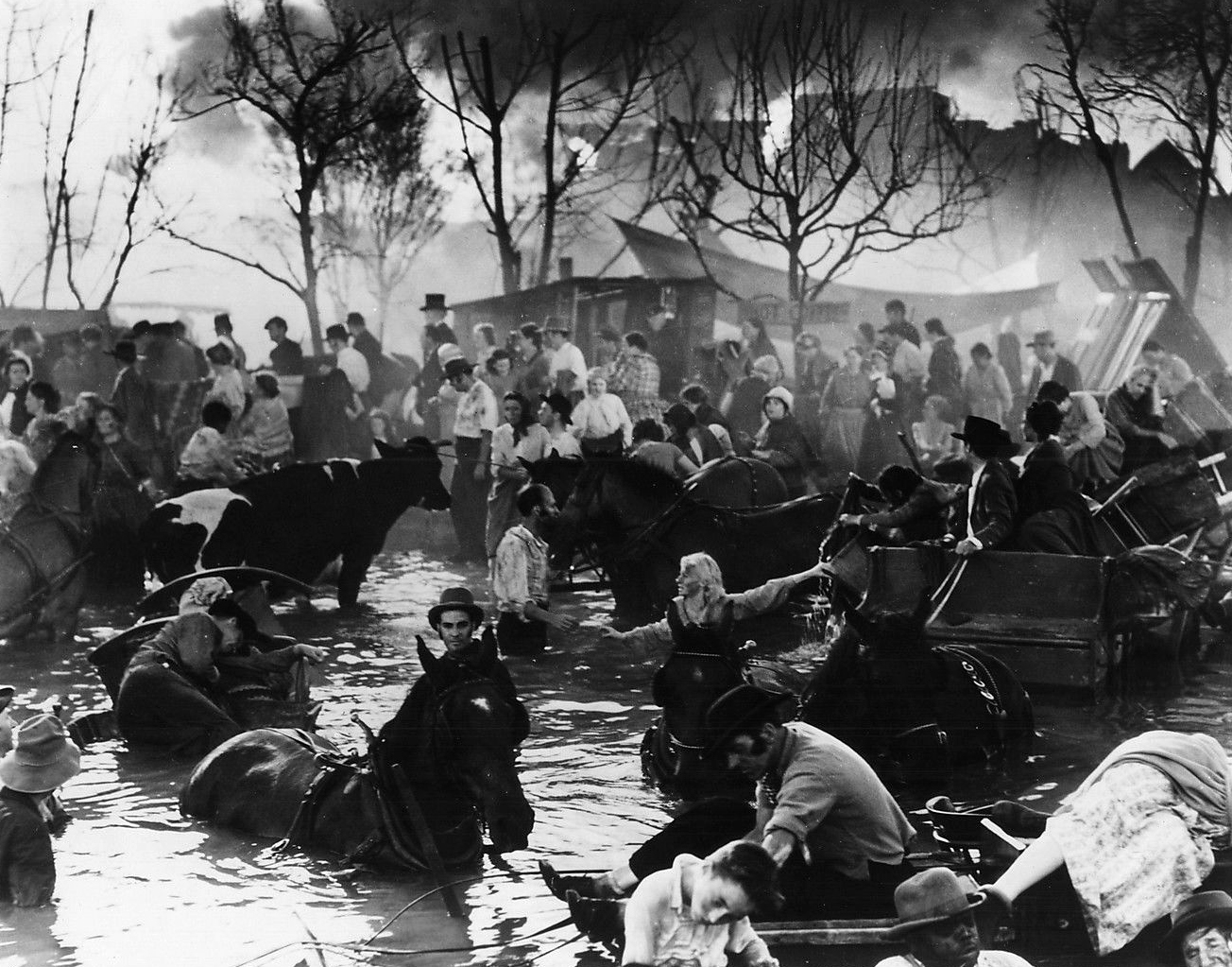 In the first eight weeks of shooting 1,100 extras were used. The most used in any one scene were the 500 in the Nineteenth Regiment armory election brawl. Twenty of these were picked. stunt women, two of whom, Helen Holmes and Fritzi Brunette, had been movie stars in their own right in the days of silent pictures. To outfit the extras quickly and properly four-pole circus tent was set adjacent to the studio’s permanent wardrobe building, and housed only the costumes for “In Old Chicago.” Two other circus tents were put up near the Chicago street set to serve as dressing rooms.

Under the direction of Royen (Lewis R. Hastings), the studio stylist, costumes for the principals in the picture were all don in the studio wardrobe department from tintypes, fashion books, and illustrations of the day. Buckles, buttons, ruffles ribbons, weaves, bustles, corsets fur pieces, hats, shoe styles, lapels, suspenders, cravats, watches, gloves, horse harness whips, dishes, silverware, eve the correct names of advertise brands in advertising, all had to be reproduced in the studio’s shops. Art Director William Darling accounted for this when he and the wardrobe staff were finished, Alice Brady, Alice Faye, Phyllis Brooks, June Storey, Tyrone Power, Don Ameche, Andy Devine, Brian Donlevy, Tom Brown, and Berton Churchill could have fitted into any tintype.

Miss Faye plays the part that had been assigned to Jean Hallow just before that star’s death. The story of “In Old Chicago” has her as Belle Fawcett, a character not found in anybody’s Chicago history except as a type. She and Tyrone Power are the moving spirits “Dion and Belle’s place.”

When news got around that the studio intended filming this story with as much historical veracity as possible, thlrty-two persons wrote the studio asserting that they had lived through the Chicago fire. Director Kin invited such of his correspondents as reside in this part of the country to come to the studio and view the reconstructed city before he burned it down. Cyrus M. Davis, 87, who was a Chicago merchant in 1871, said that the sets had recreated particular buildings and street corners with a fidelity that startled him. The budget of the picture was originally set by Darryl Zanuck, head of the studio, at $1,500,000, but this sum already has been exceeded The special effects for the fire alone, he said, cost $500,000.