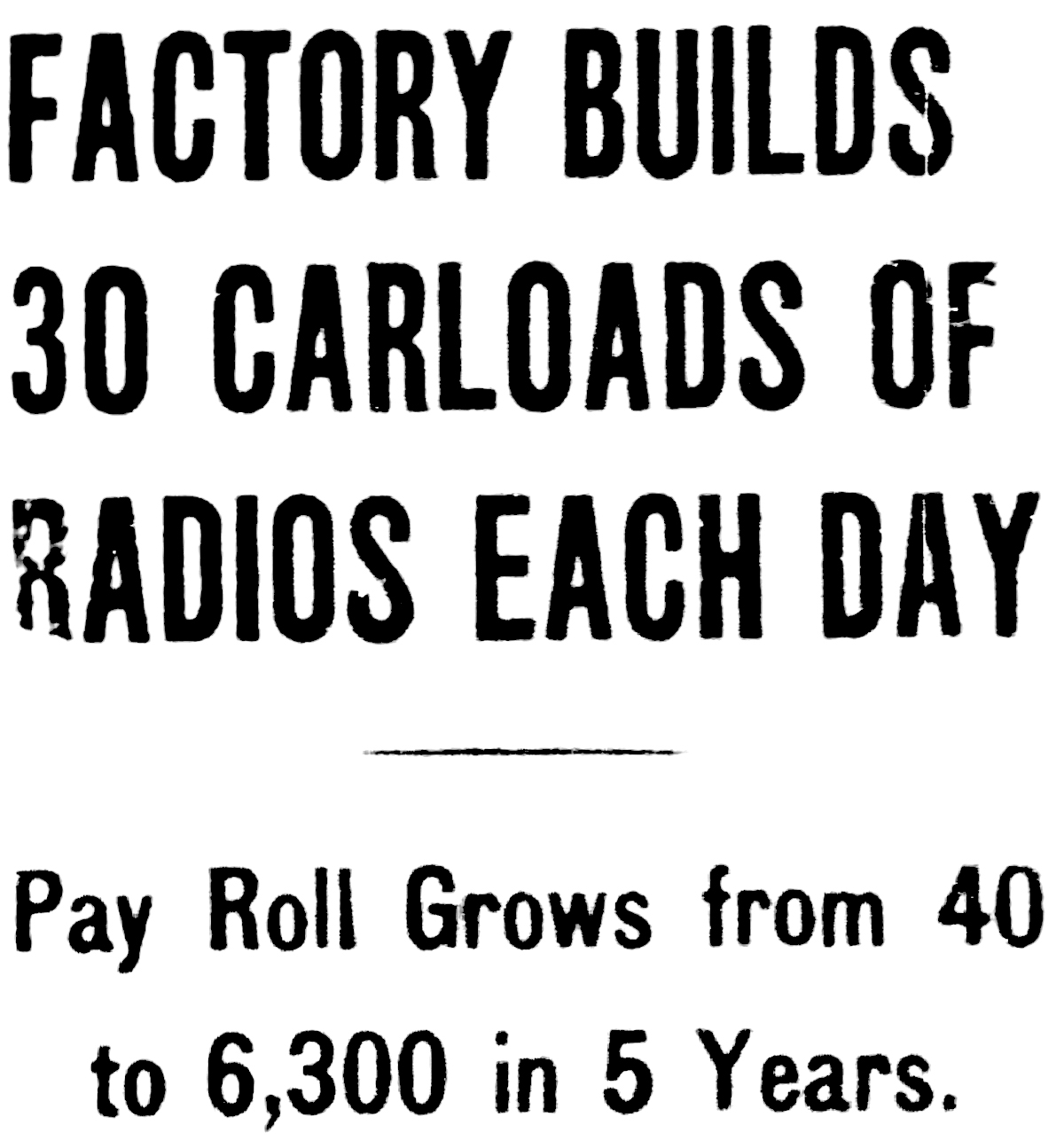 The magic of radio is not limited to the programs which cause us to marvel as we sit listening in front of our sets. Chicago has a “stranger than fiction” story dealing with the manufacturing phase of the invention. In a changing world, some 6,200 persons find employment today with the Grigsby-Grunow company who, were it not for the demand made by this marvel of the new age, would be finding it necessary to seek niches in some other field.

Taking for its extended activities the building left vacant by the Yellow Cab company plus two plants on Armitage avenue, the Grigsby-Grunow industry means much ti the northwest side. A visitor to the plant comes upon a business conducted on a scale that that amazes and in a fashion that makes one realize the modern world is moving too swiftly for following methods of the past. The factory on Dickens avenue is new in its spirit and in its workings as radio itself.

For instance, the Grigsby-Grunow company has no warehouse. Thirty carloads of aw materials come into the plant every morning and thirty carloads of completed radios go out every night. That means 3,200 complete radio sets turned out at the plant every day, and even this output is insufficient to supply the worldwide demand.
‘
‘In order that adequate supplies be available, the company has five mills whose sole efforts are devoted to providing lumber for its needs.

Approximately eighty-four tons of steel are used each day.

The company uses enough wire for its super dynamic speaker to circle the globe daily.

Sixteen thousand pounds of tinfoil are used every day.

Approximately 12,000 pounds of paper are used daily for condensers.

More than twenty tons of wax are used each day for the impregnating of condensers, chokes, etc.

More than 5,000 pounds of aluminum are used daily.

Big Growth in Five Years.
These figures become the more impressive due to the fact that only five years ago the Grigsby-Grunow company was operating in one floor of a little building on Lake street. A year ago it got along with 100,000 square feet of floor space. Five years ago the number of employés totaled only forty.

Radio is new, and the company found itself without any machines in vogue to handle heavy production. Its own engineering staff made the required machines and made them so simple that they could be operated without mistakes. There are fifty experimenting engineers in the employ of the company today and their slogan is “It can be done.”

This attitude is a reflection of the spirit of the two men, still comparatively young, who are at the head of the institution and who, by training and temperament, were in a position to graspo opportunity when the electrification of radio was at its dawn.

Recognition Given to Ability.
At the plant on Armitage avenue Mr. Grigsby and Mr. Grunow, with a few hundred employés, had the nucleus for the present expanded institution. The “straw boss,” with loyalty and an aptitude for his job, has become an assistant superintendent. There has been a genius for handling men as well as a genius for mechanics. The new plant is a place where ability is recognmized and the pay envelope reckoned accordingly. 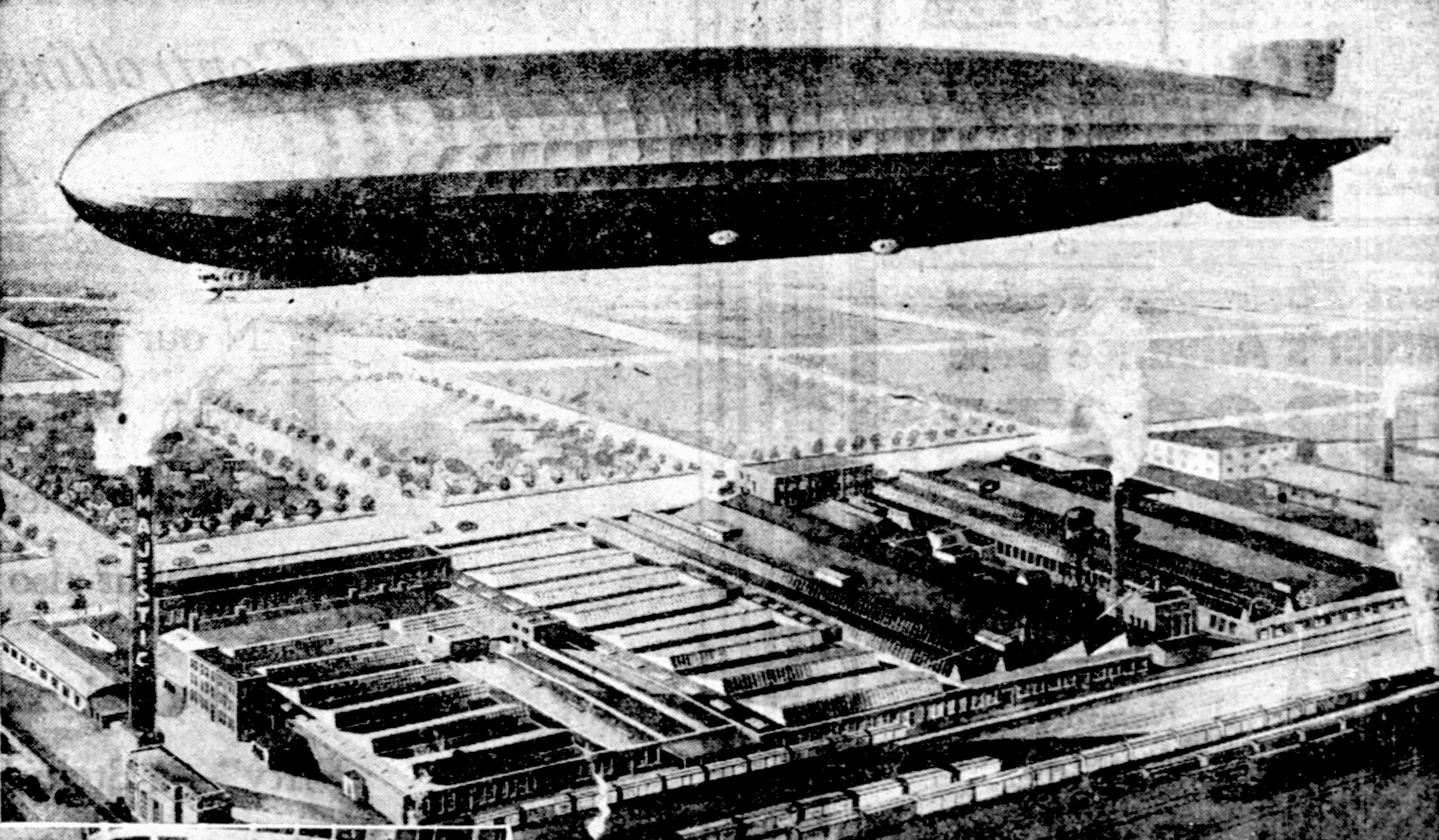 As recently as lat July only a fifth of the floor space at what was the Yellow Cab company quarters was used by the firm. Now, all of the space, 500,000 square feet. is utilized.

In August of this last summer a picnic of the plant employés and their families was held at Cary. Seven thousand attended. The cost of the outing, taken care by the firm, amounted to $10,000. There were a good many “extras” at the event, but a large proportion of the workers are girls and, incidentally, numerous admirers of them were included in the informal invitations. Ten North Western trains of twenty cars each were required to transport the picnickers.

Mr. Grigsby and Mr. Grunow both attended the picnic and gave proof of the fact that they had not forgotten how to play and that the romantic success of their business had not altered their spirit of camaraderie.

Three Beauty Queens Win.
When the judges had simmered the bathing beauty contestants down to three and were still in a dilemma, Mr. Grunow decided all three were winners and three radio sets were awarded instead of the one that had been intended.

“A good place to work,” is the way the army of employés speak of the plant whose history reads like a page from the Arabian Nights.

“Good workmanship” is the slogan of the firm, for to every seven or eight employés there is an inspector. And each set, from the time it leaves as raw matertial and comes forth a finished article, goes through 1,000 tests.

Well, there is no city, village, or hamlet in America where the sets turned out in the big plant on the northwest side are not in use. Also they find their way rto many foreign countries, among them England, Australia, Japan, and China. 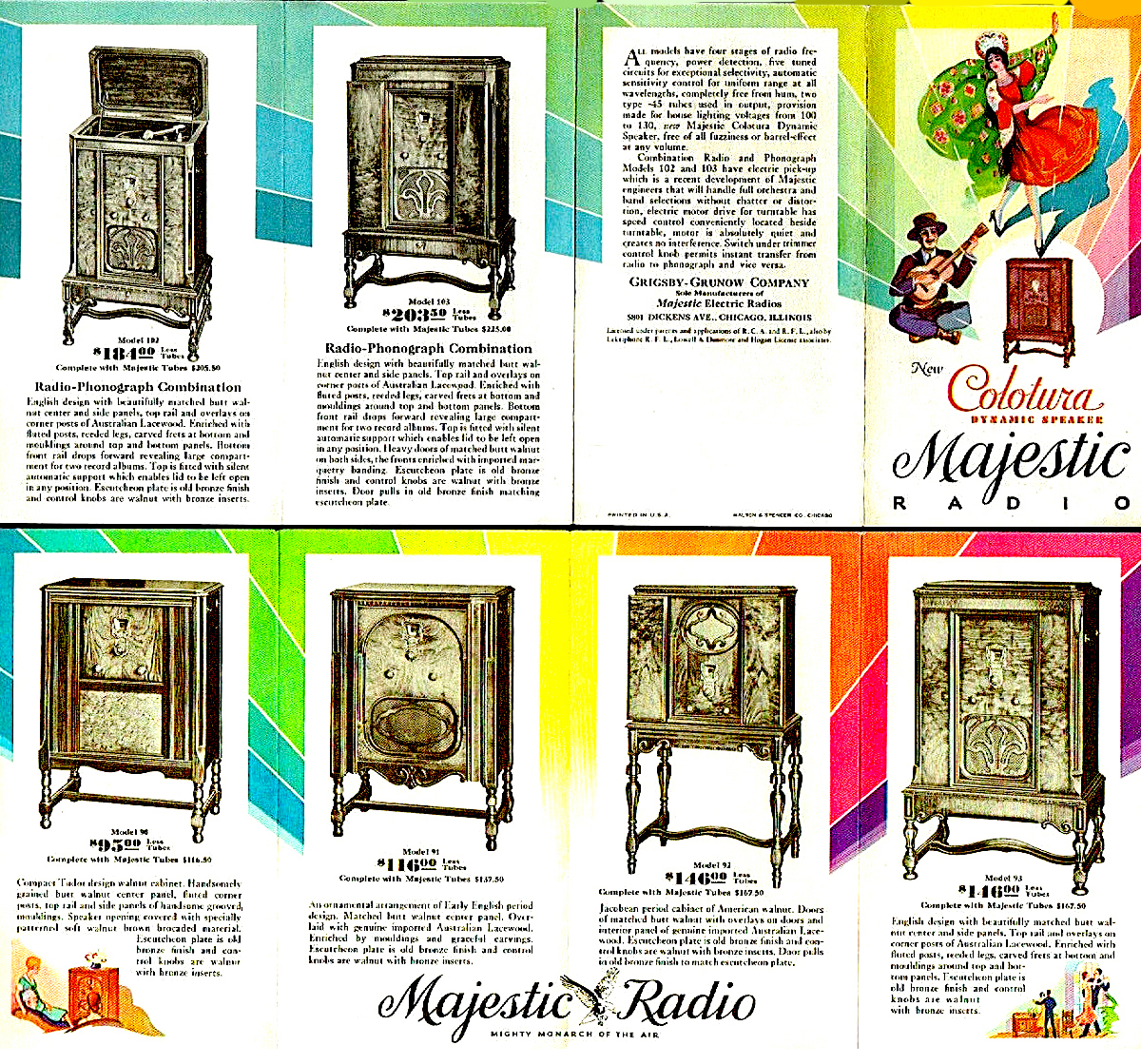 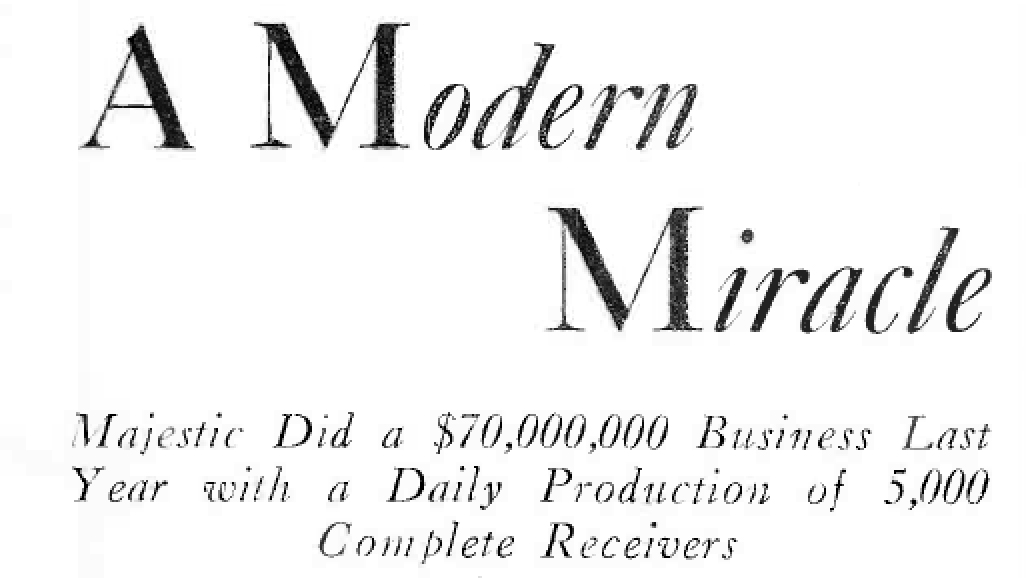 The remarkable things this concern has done, and is doing, can be epitomized in a sentence. Each day materials for one day’s production are received at the front door, and each night the day’s production is on its way to thousands of dealers. Not a square foot of storage for finished sets. Every month’s production is increasing and it is now assured that the Grigsby-Grunow Company, by September 1, 1930, will be producing 7,000 sets daily.

Specific policies and methods have been followed in stepping the production up to 5,000 radio sets—over three-quarter million dollars’ worth—per day in the plants of a seven-year-old radio parts manufacturing company that a year and a half ago had never made a complete radio set in its corporate life. This story is not about radio manufacturing. Instead. its subject is: Speedy Industrial Expansion. 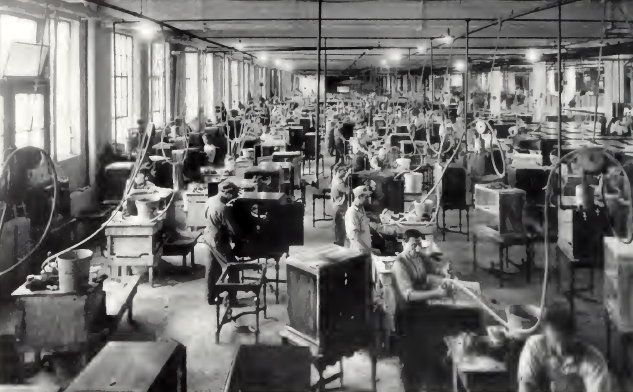 Final assembly in the cabinet factory said to be the largest furniture plant in the world.

Steady mass production, evidently planned in advance with extreme care, checked hourly in each department, with inspectors and testers at hundreds of different stages in the making of each radio set, is the Grigsby-Grunow method. There are 13,000 employés, 1,300 inspectors and each Majestic represents 992 inspections.

Material flows through the eight plants in a steady stream, speedily—but not hurriedly. In the first two the radio set itself is made; in the next five, the cabinet, the speaker. while in the eighth 6,000 tubes are turned out daily.

There are no warehouses, and only a few relatively small stock rooms. In some cases material comes into the shops and within two hours is loaded on cars again in the form of completed radios, boxed for shipment. Practically no item is kept in an unfinished state more than two days.

About thirty-seven carloads of raw materials arrive daily. There is a standing order for forty empty box cars a day, to be switched in, ten at a time, into which radios are loaded the moment they are completed.

To build 5,000 complete radio receivers in an eight-hour working day is in itself a tremendous accomplishment. To build these same receivers at this great speed and with no sacrifice of quality is even a greater accomplishment. 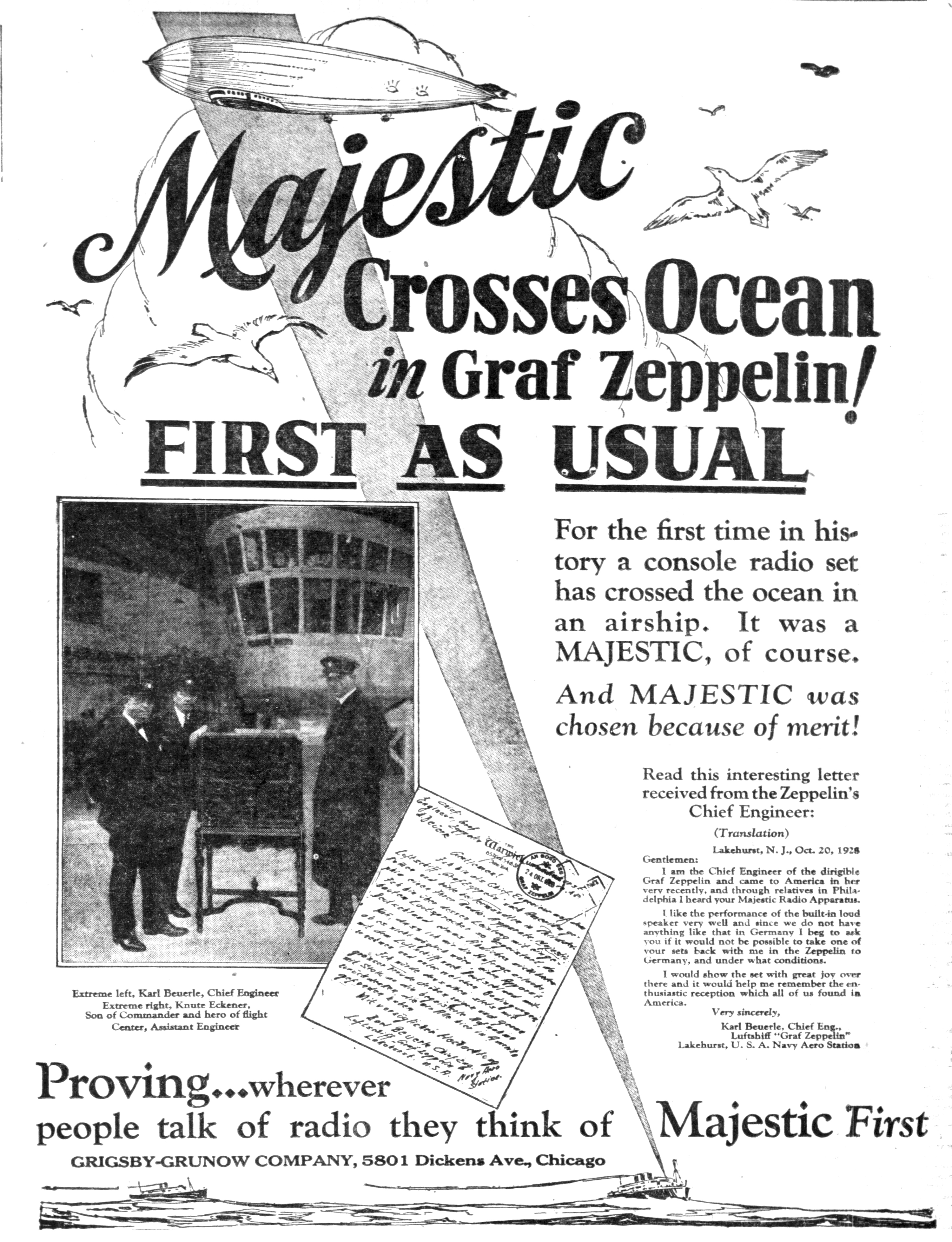 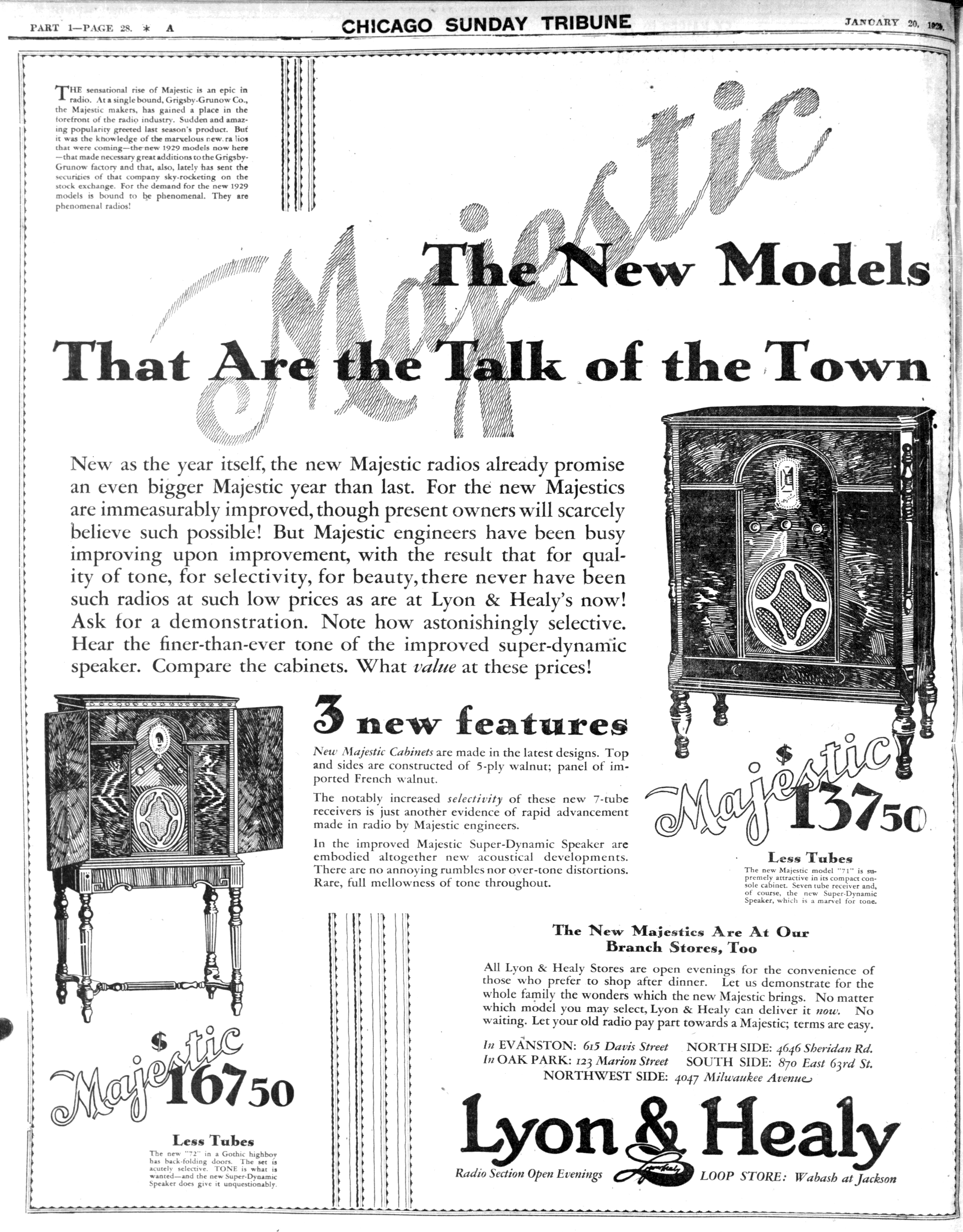 Grigsby-Grunow
Grigsby-Grunow company was incorporated in 1921 to manufacture automobile accessories and radio equipment. In 1928 it started the manufacture of radios on a volume basis. It was just about then that radio sales assumed large proportions and the company enjoyed unusual prosperity for two years.

When business activity began to slacken in 1930, it became evident that the radio industry had overexpanded and overproduced. Reaction was natural. Price cutting was severe. Sales showed sharp decline.

In April, 1930, Majestic Household Utilities was organized by Grigsby-Grunow to manufacture electric refrigerator. The refrigerator corporation was designed to take up the seasonal slack of the radio industry. Lack of working capital necessitated a reorganization and Majestic and Grigsby-Grunow were merged.1

The radio industry is just emerging from the condition of chaos that was prevalent in 1930 and 1931. Keen competition exists in the electric refrigerator field. 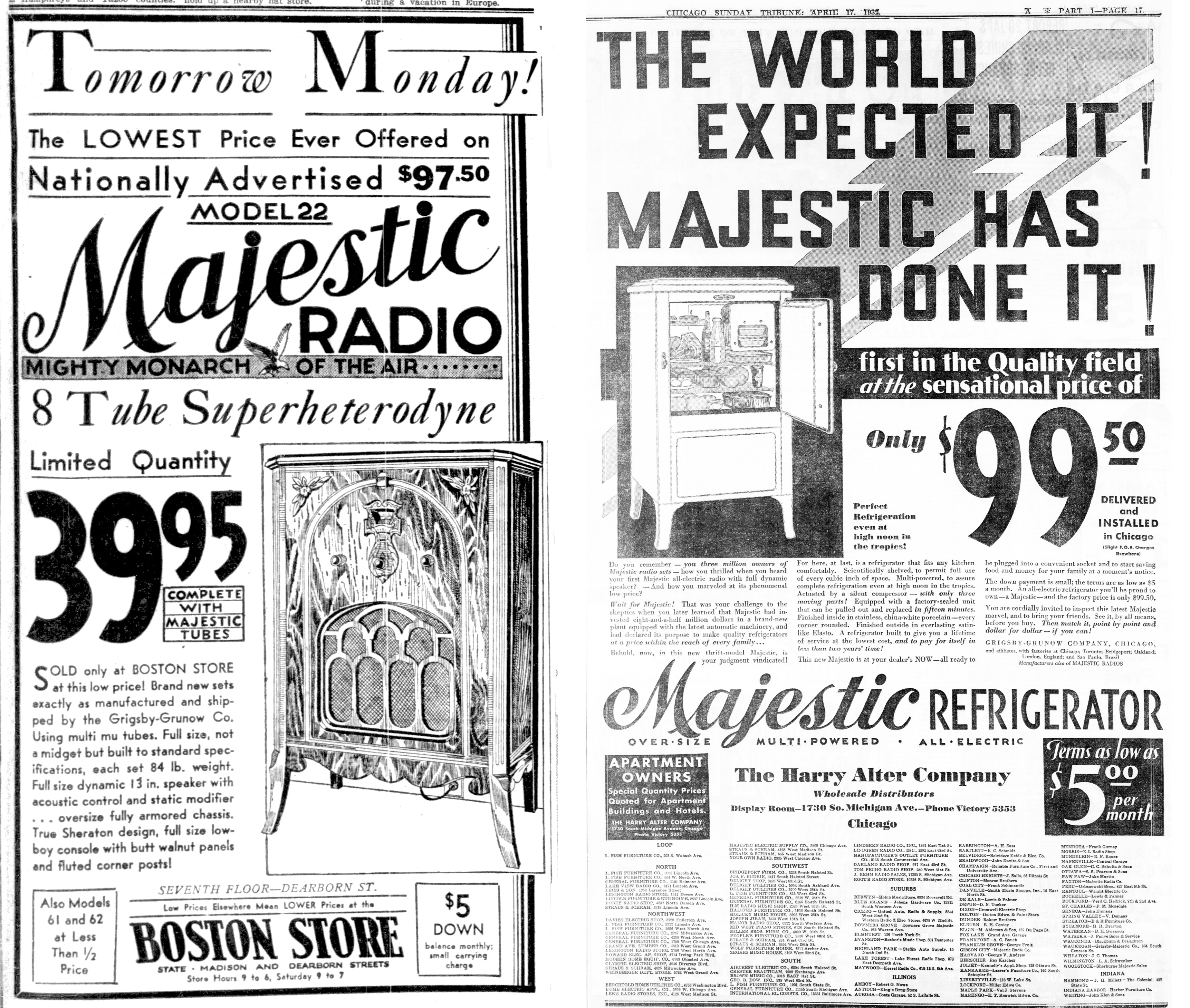 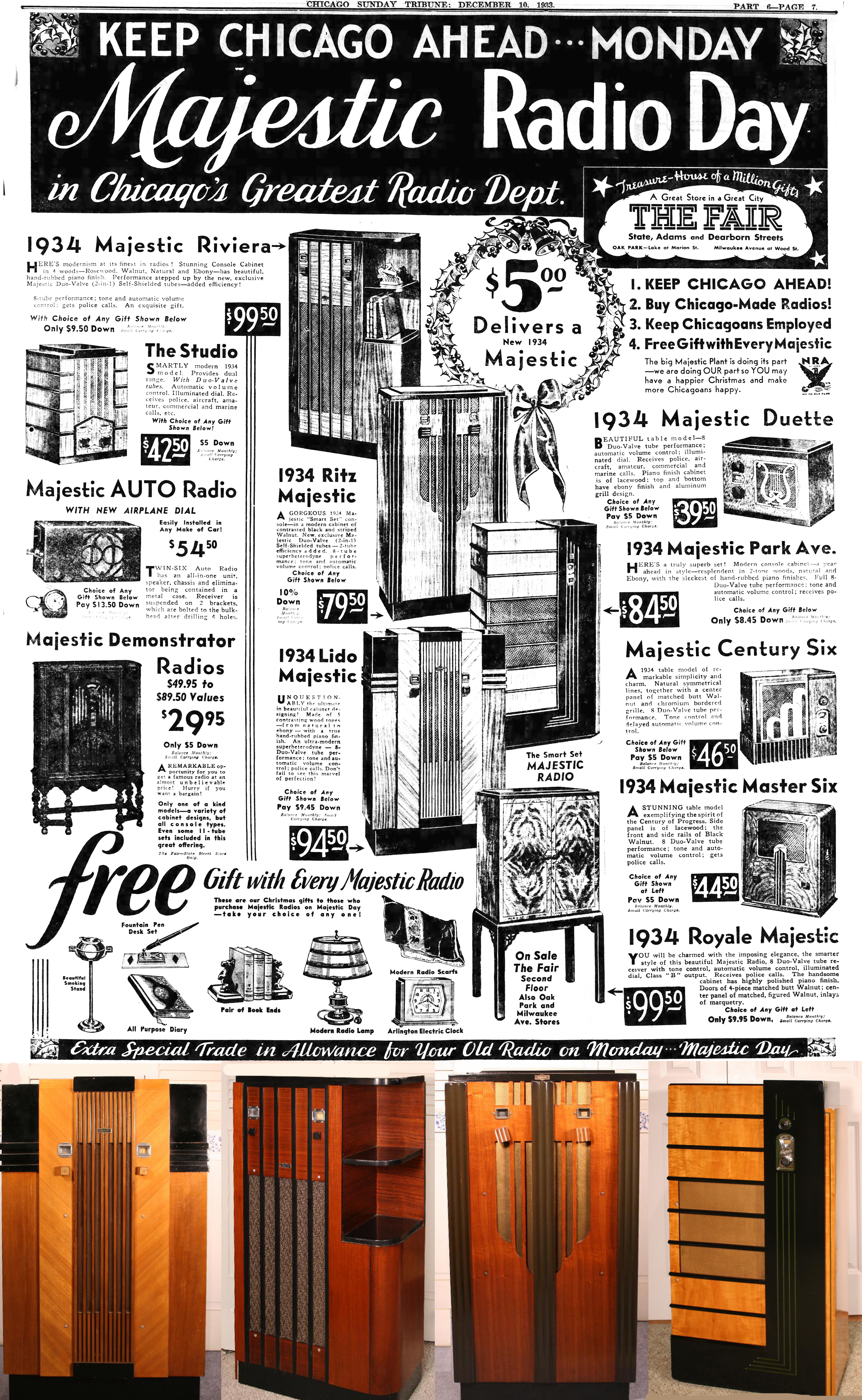 In September, 1933, Grigsby-Grunow introduced a quartet of console radios called “smart sets,” inspired by the “A Century of Progress” World’s Fair. This is one of many advertisements dealers used. These radios today are very popular with radio collectors as the photos on the bottom reflect fully restored models.

THE RISE AND FALL OF GRIGSBY-GRUNOW STOCK 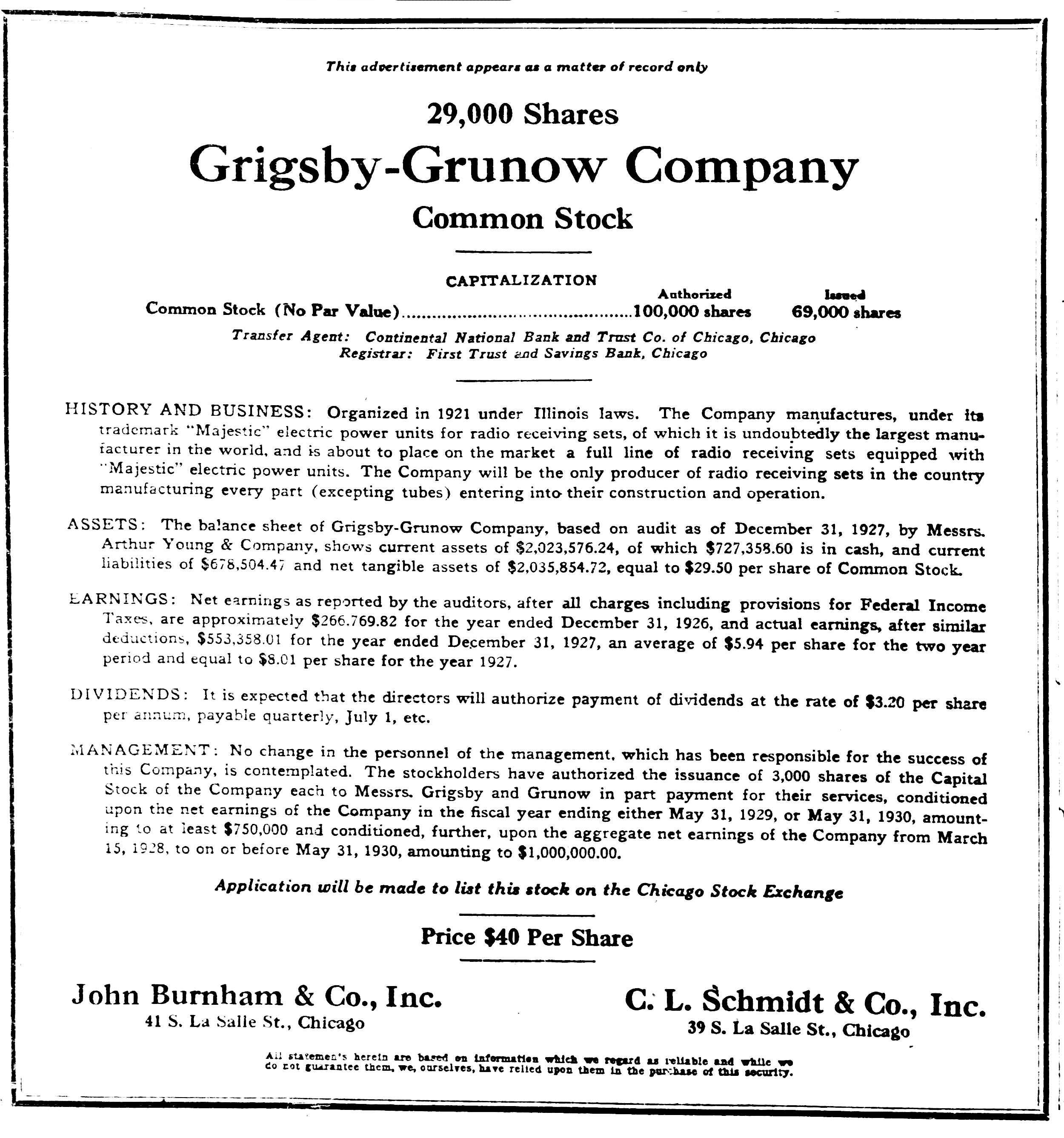 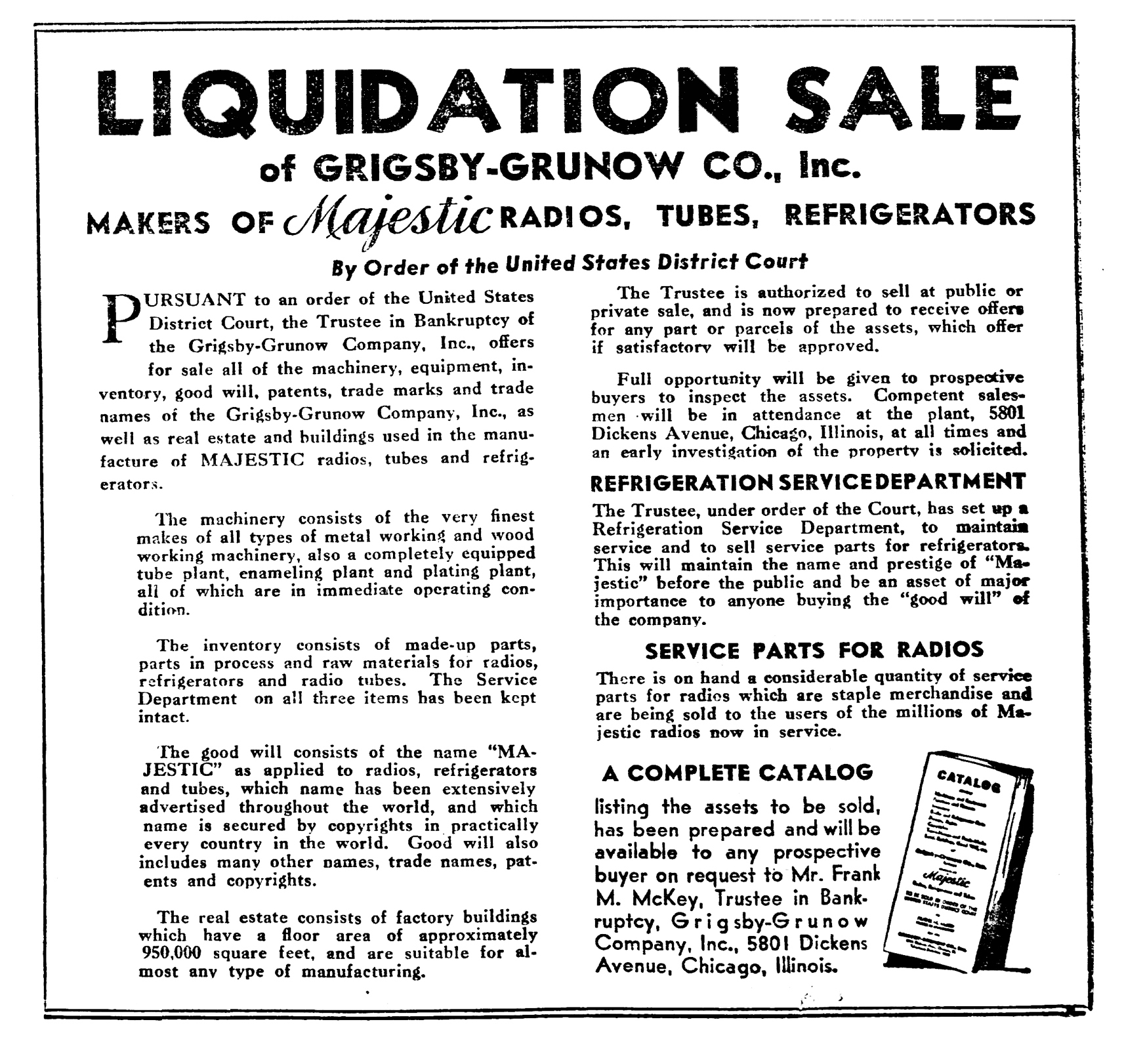 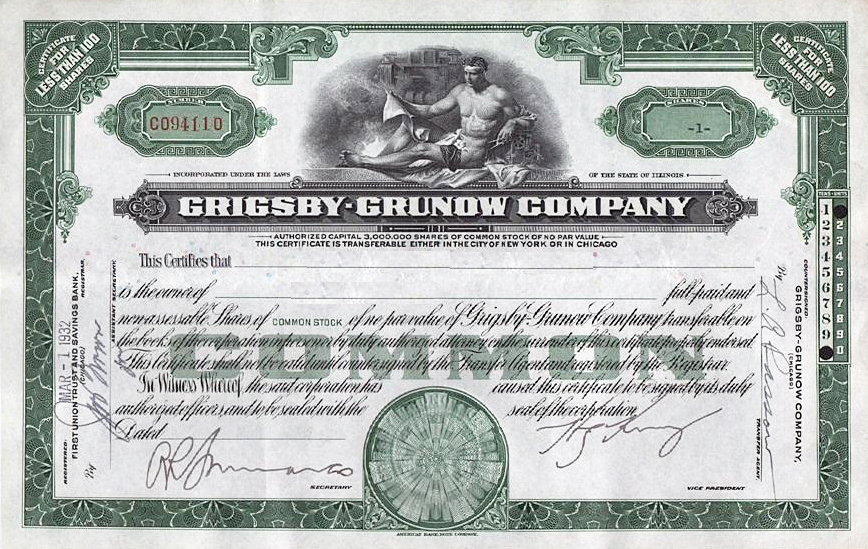 1 In September, 1932, a Federal Judge upheld the validity of two patents owned by Frigidaire Corporation for an automatic temperature control against Grigsby-Grunow. The Judge said the Grigsby-Grunow devices “are the same, or the mechanical equivalent of the plaintiff’s devices.”