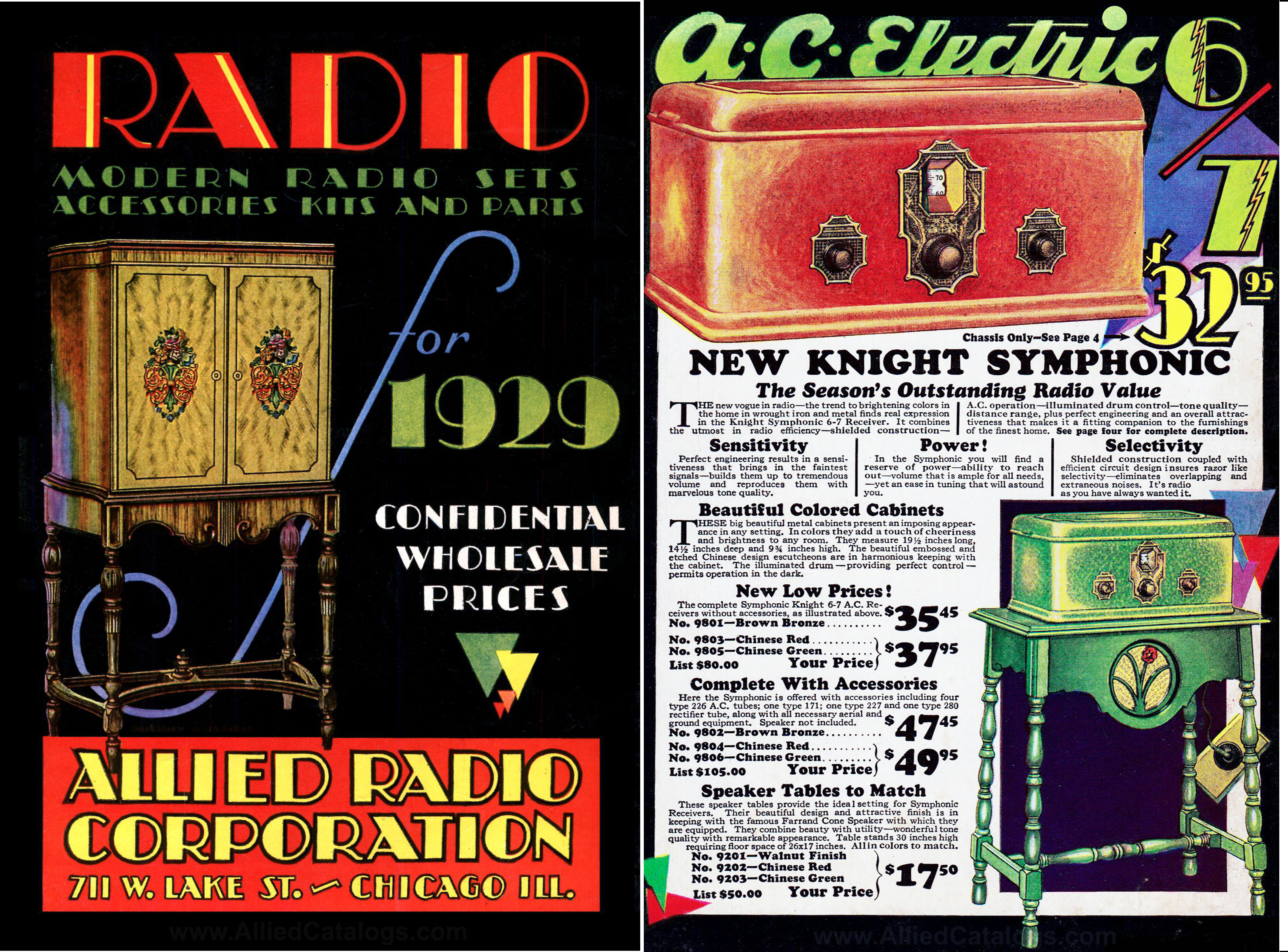 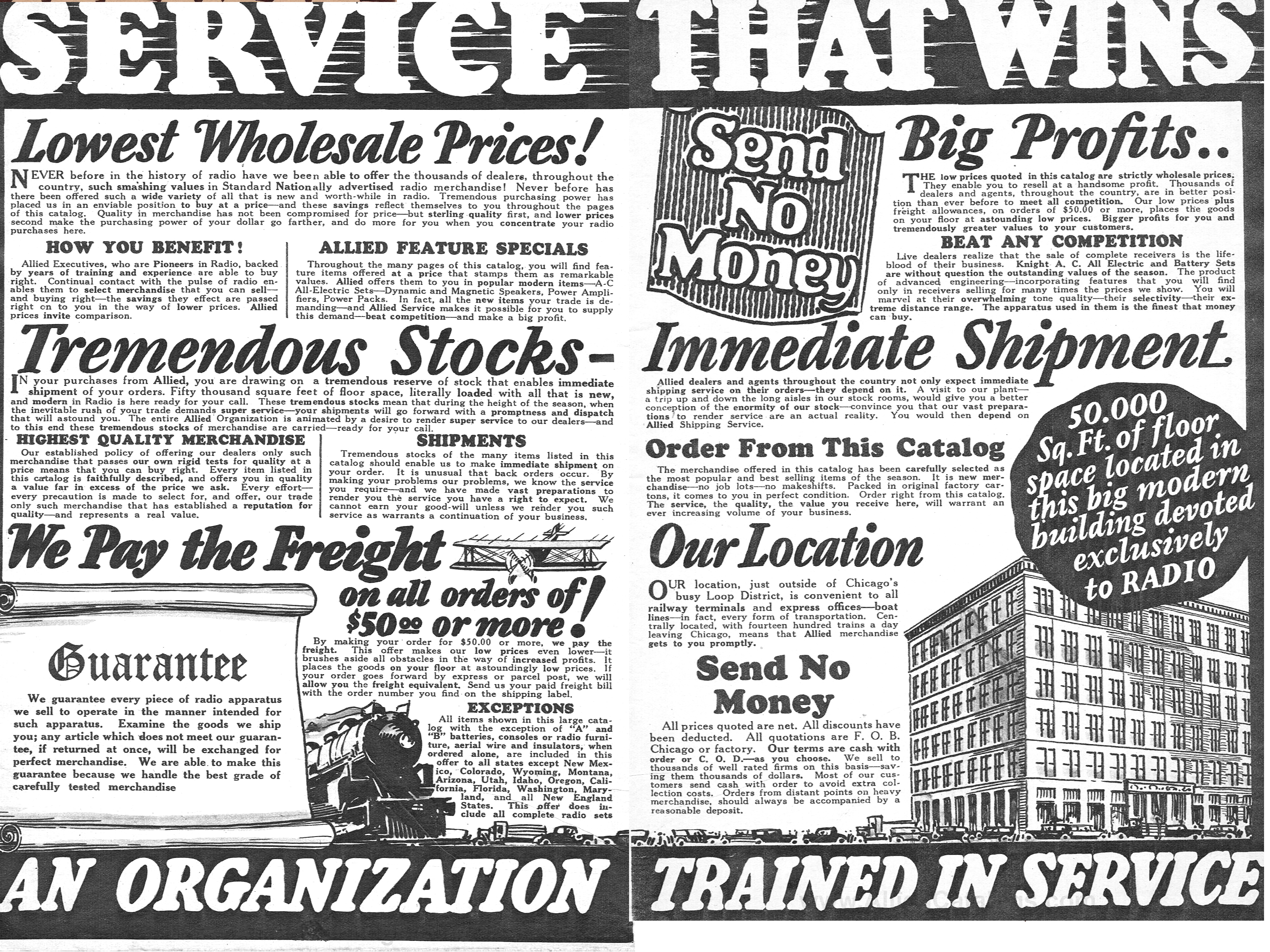 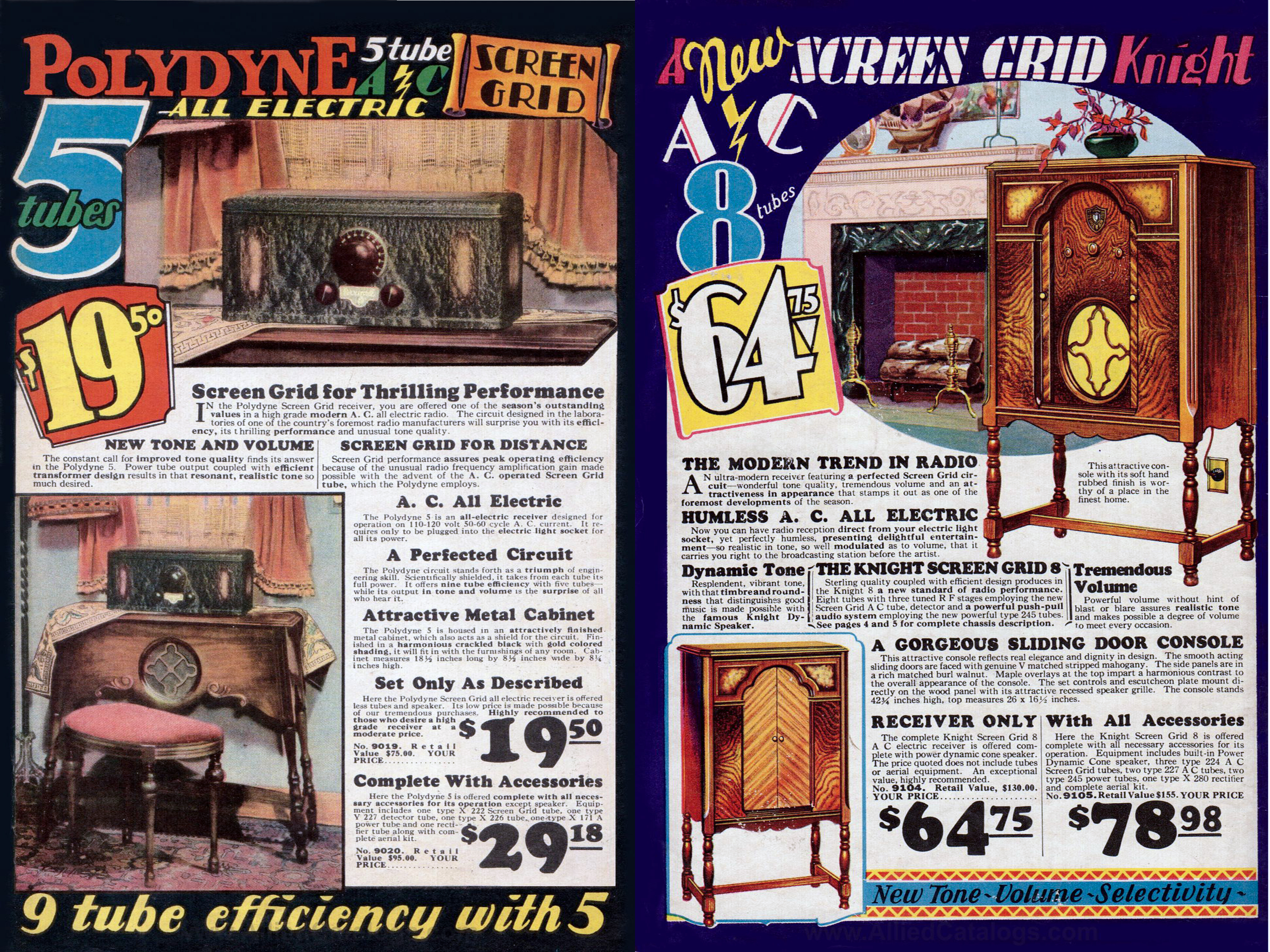 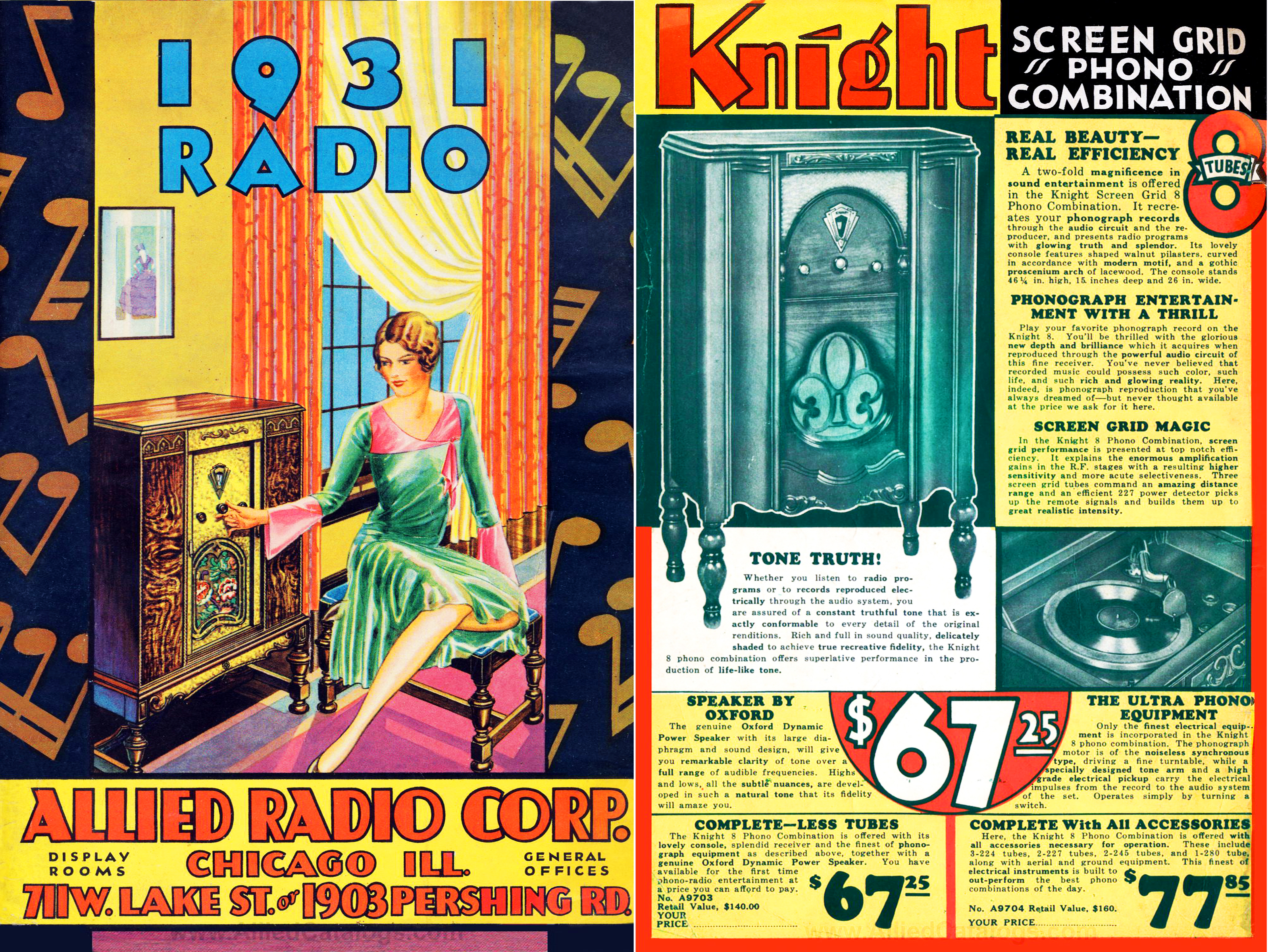 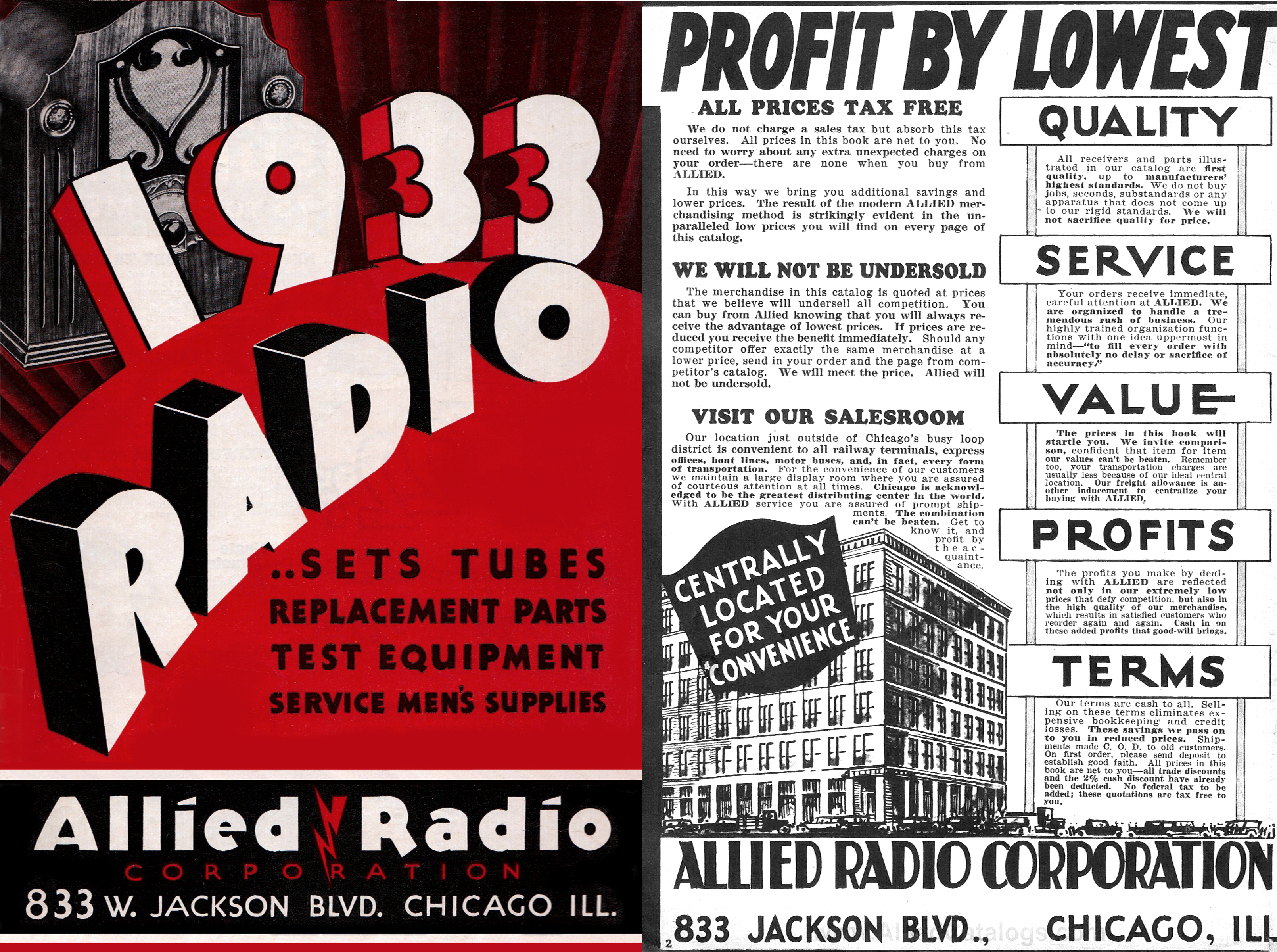 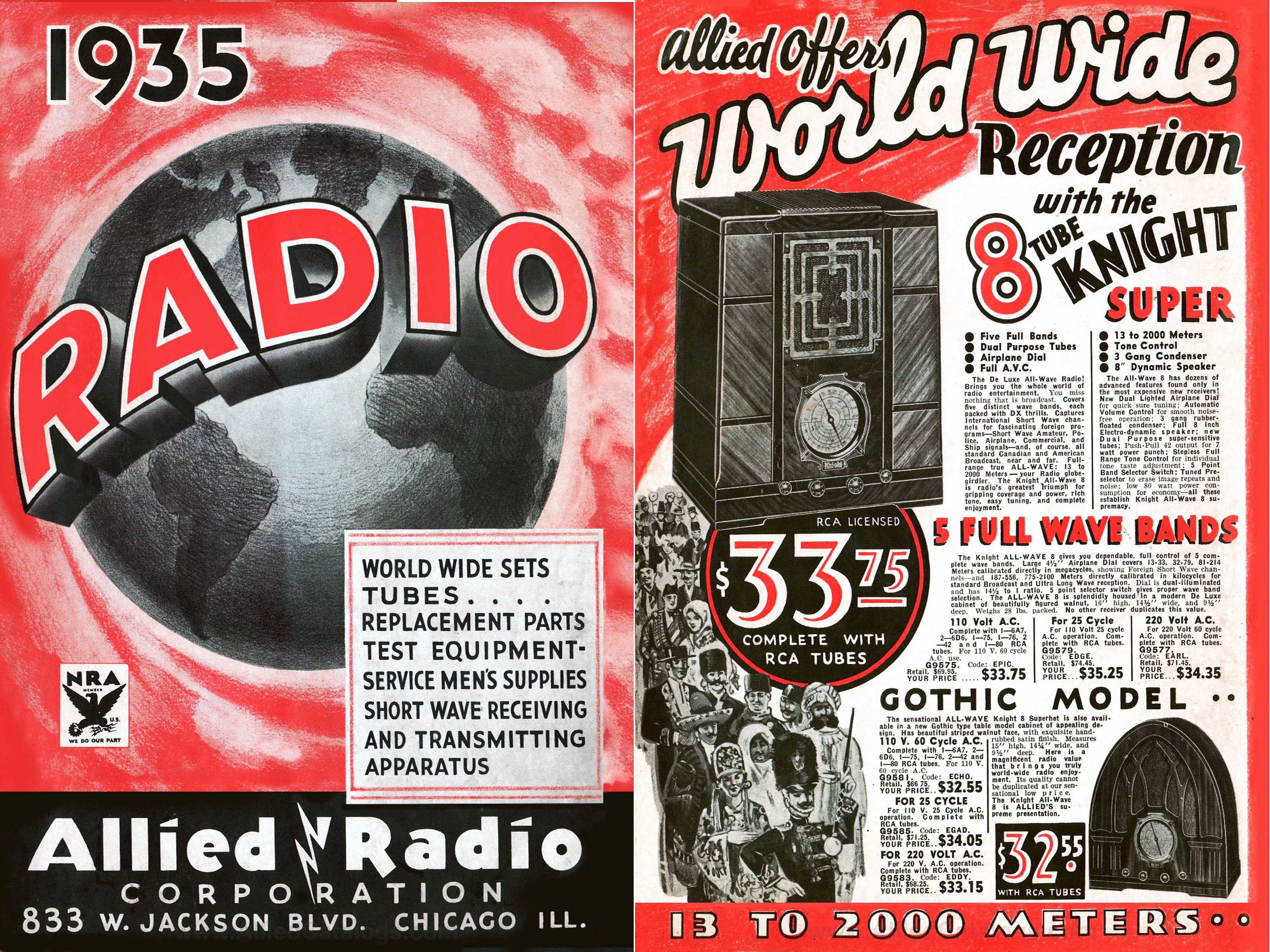 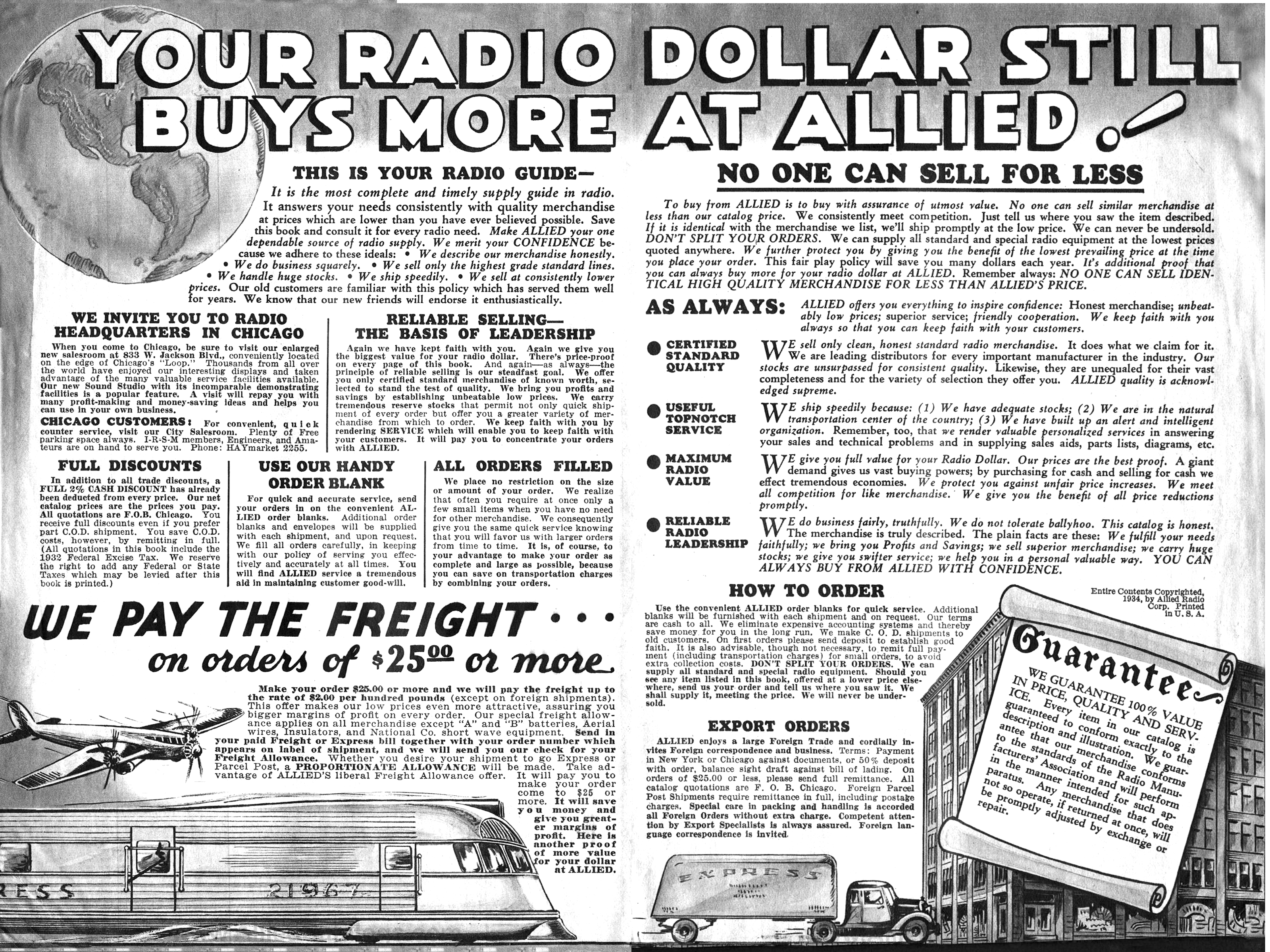 Having survived the depression, Allied focused on the war effort, primarily servicing government contracts and high-priority industrial orders. During WW II, Allied devoted itself to the war effort by handling government contracts and high-priority industrial needs. This was Allied’s first real experience in industrial electronics. Allied did not produce a catalog in 1944 and 1945. 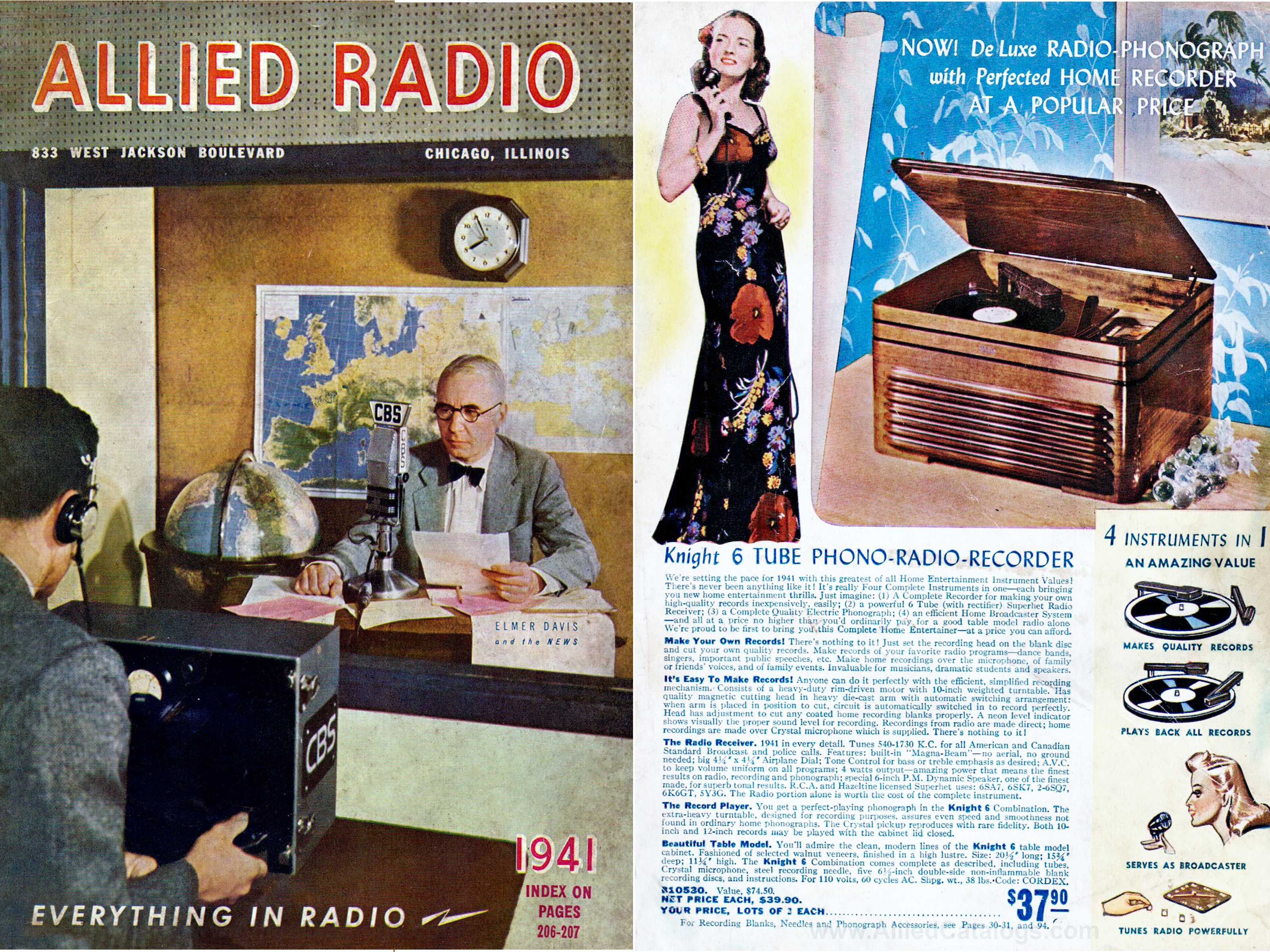 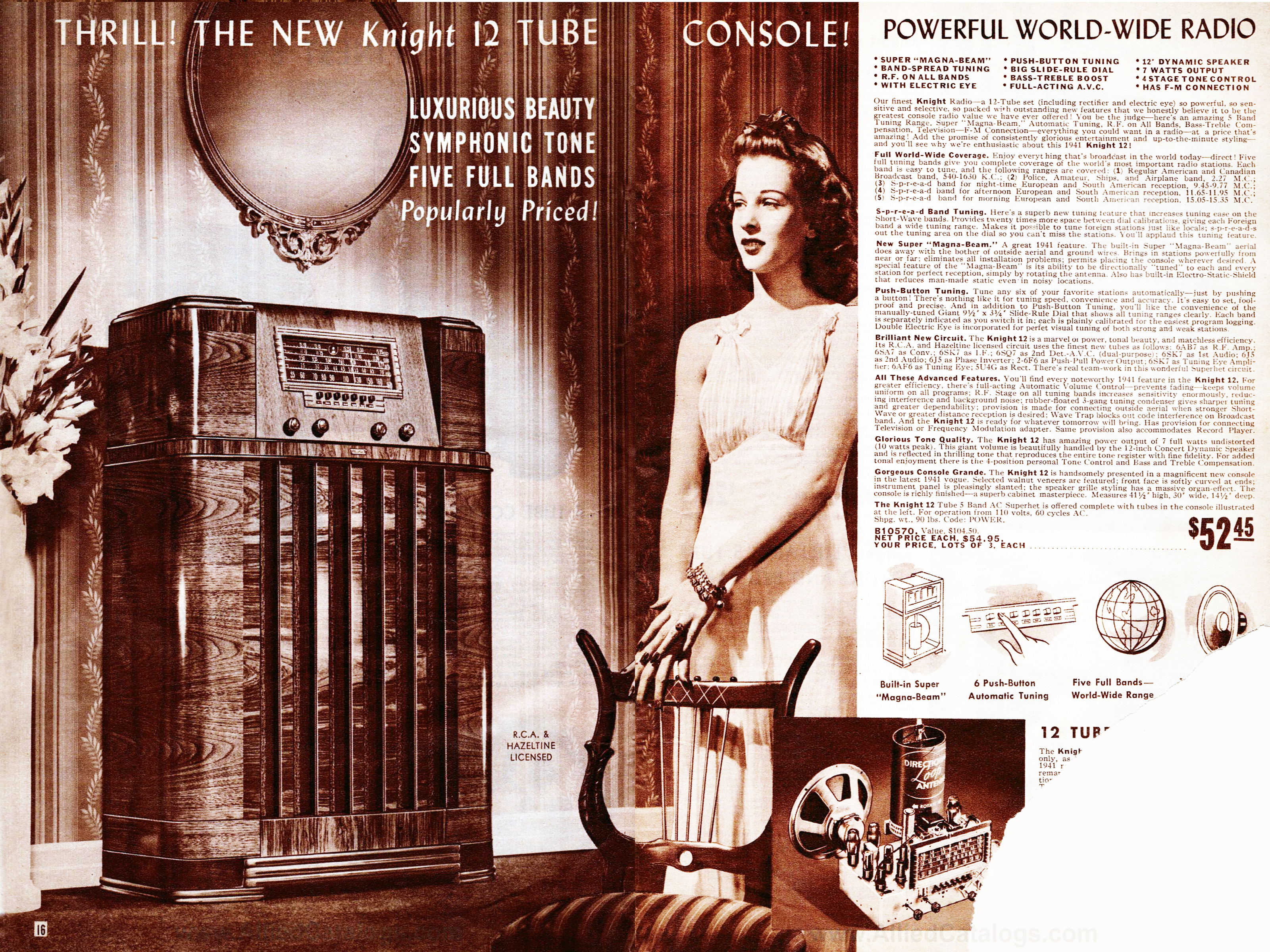 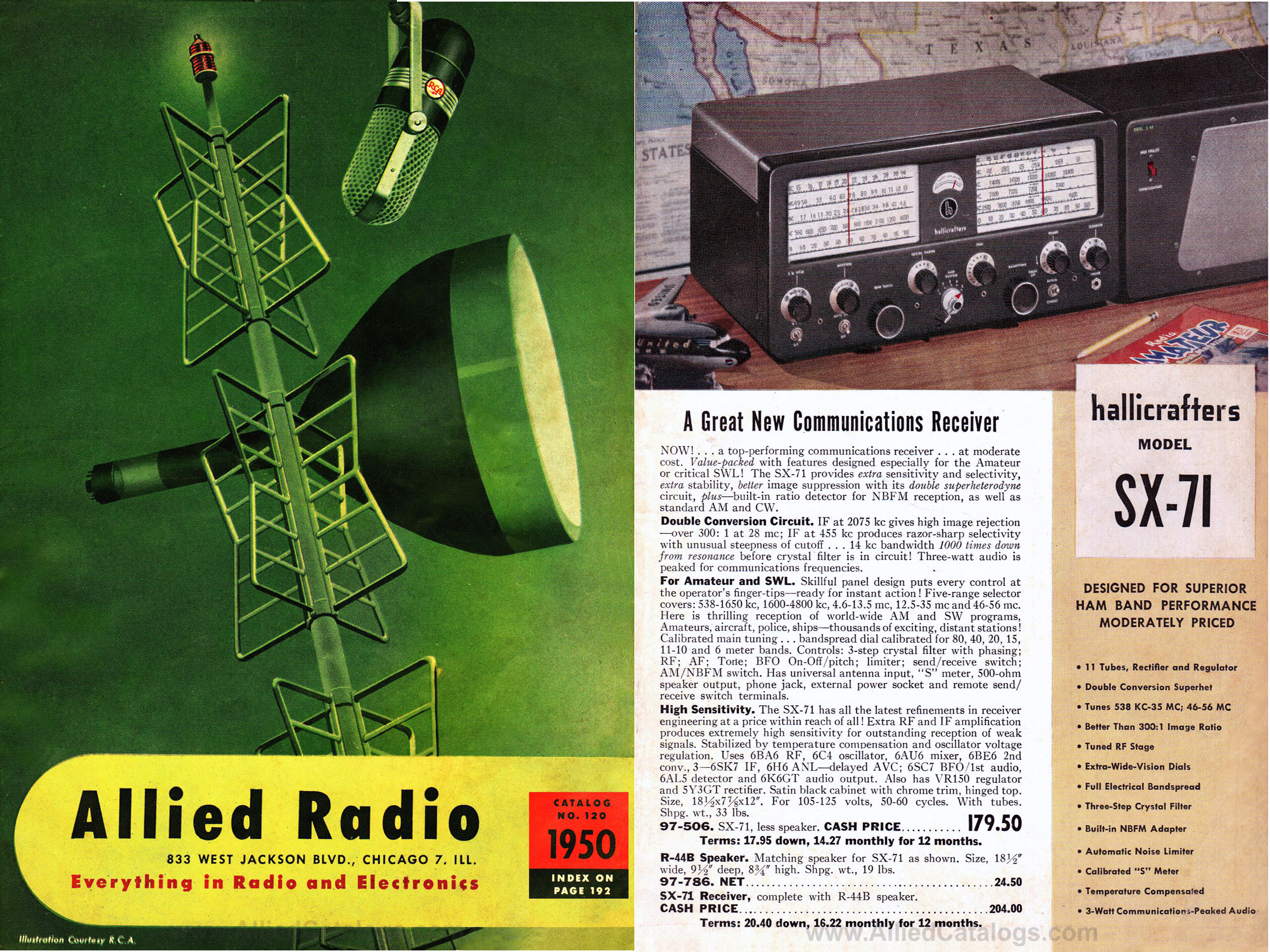 The electronics industry exploded as new developments in electronics were adopted on a widespread basis in commerce and industry. Innovations such as television, industrial automation, space technology and defense accelerated the need for electronics. Consumer demand also grew as radio sets and components not available during the war proliferated. During this exciting era, Allied gained both the experience and specialized staff necessary to handle both consumer and industrial sales. Allied’s main competitors were Radio Shack, Lafayette Radio, Olson Electronics, Newark Electronics, Burstein-Applebee Co., and local independent dealers (such as WinterRadio). Allied’s primary house brands included “Allied”, “Knight”, and “Knight-Kit”.

In 1953 Allied Radio Corporation moved into its new, 2 million dollar building at 100 N. Western Ave, Chicago, IL. This “ultra-modern” facility was designed by experts to give their customers the best service in the industry. The new building covered a full city block and provided 147,000 sq. ft. of efficient floor space for better, faster service. It included pneumatic tubes and conveyors to carry transactions and merchandise on a speedy order-filled schedule that cut hours off normal handling time. 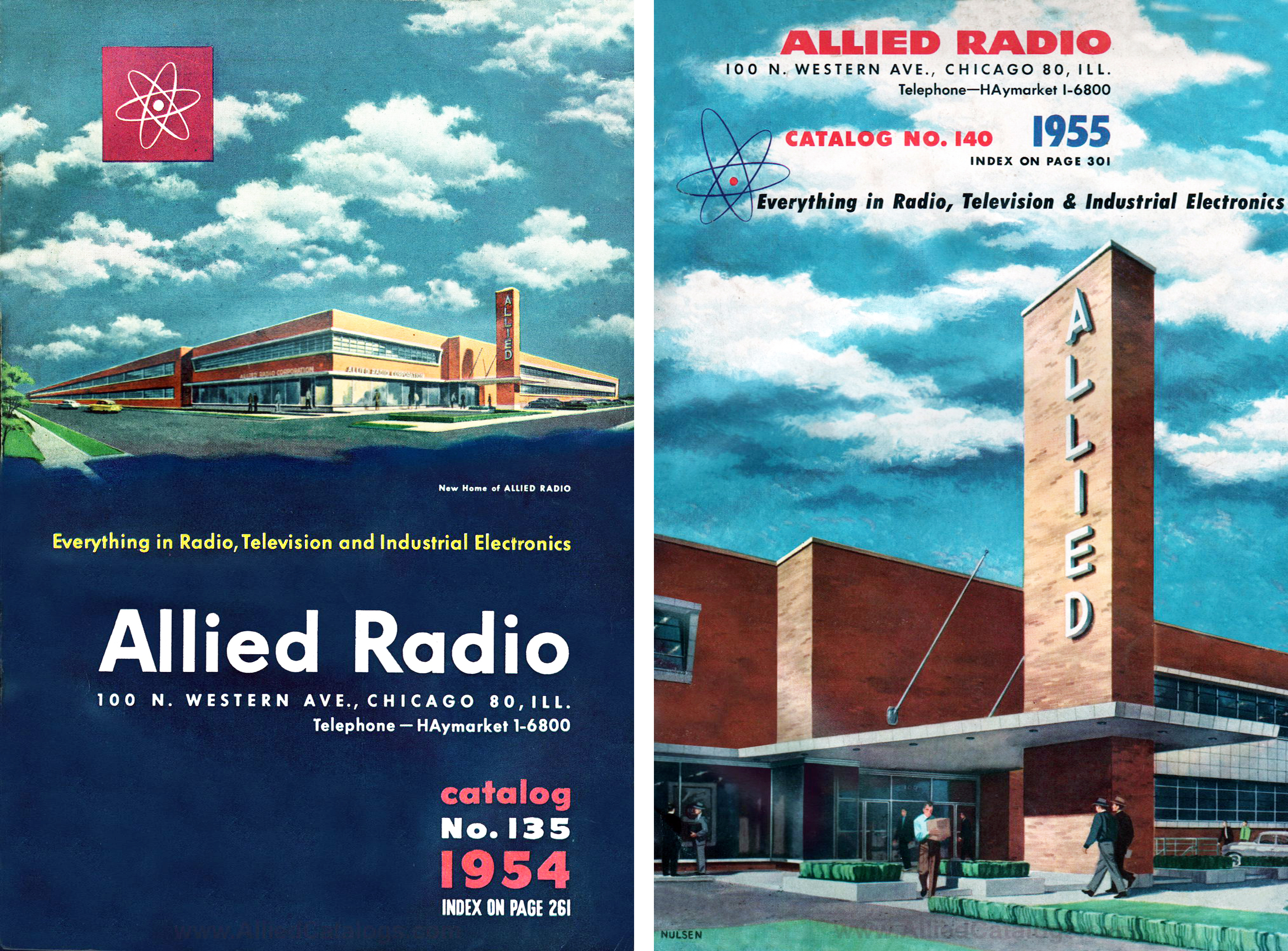 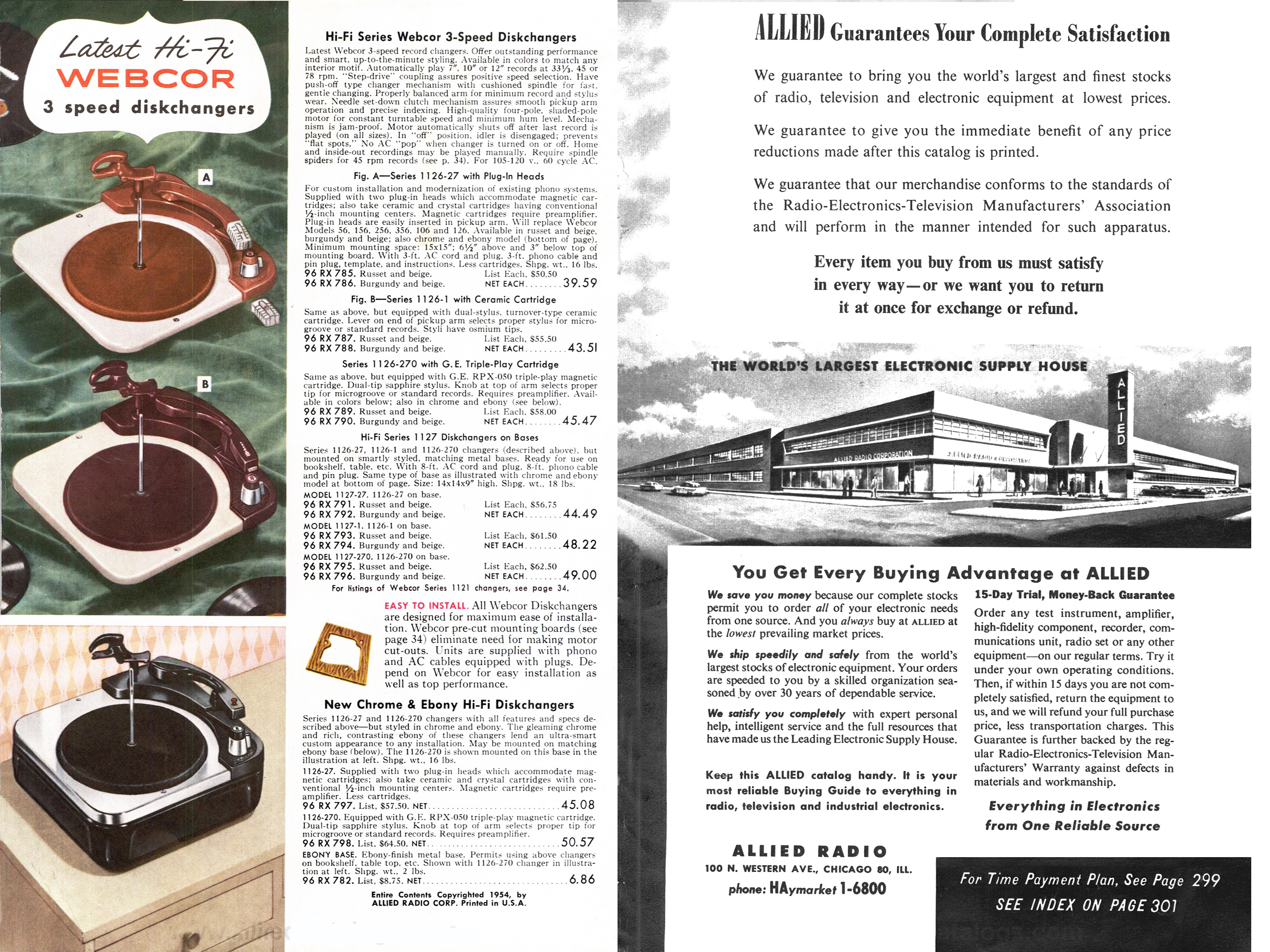 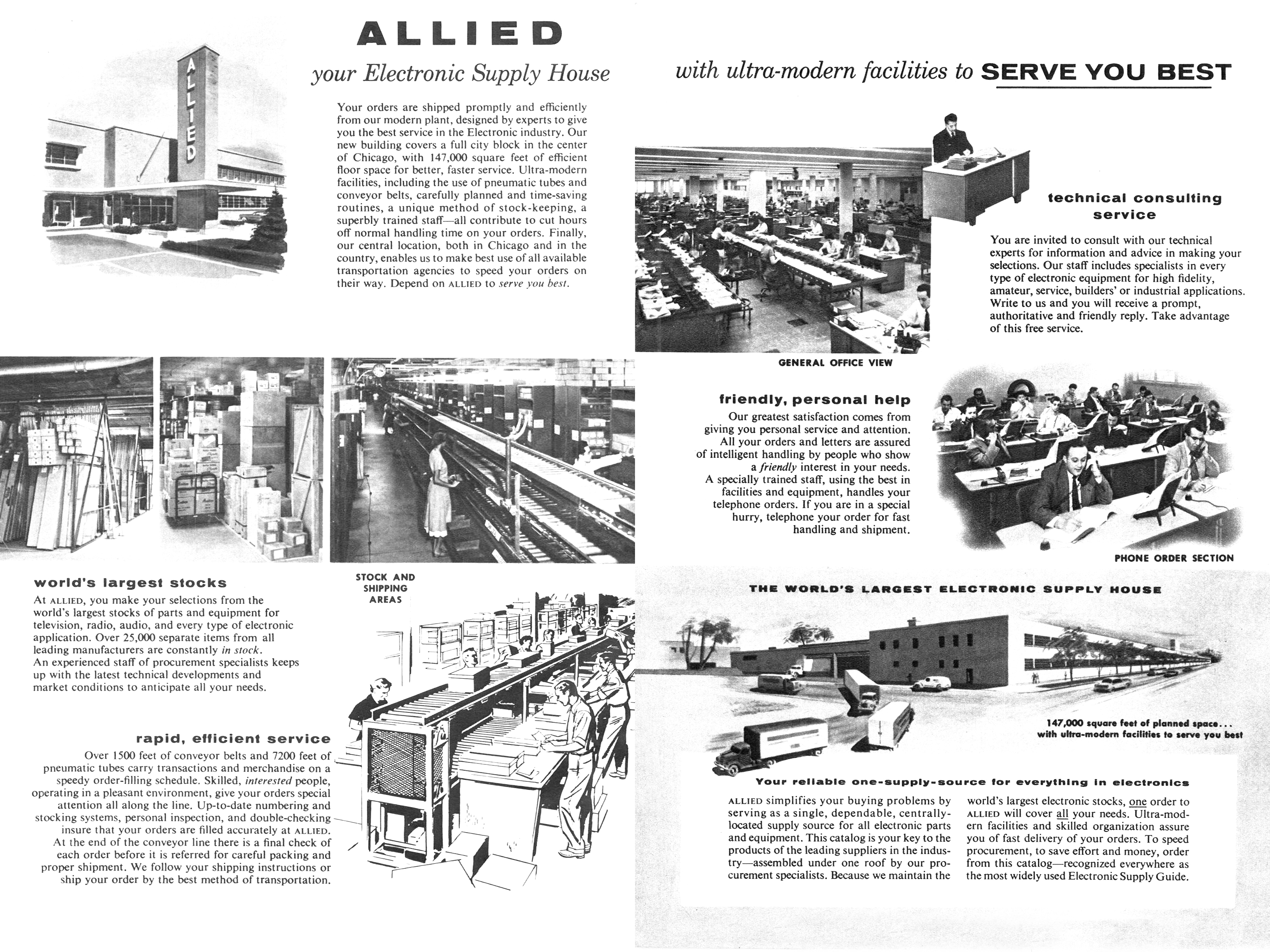 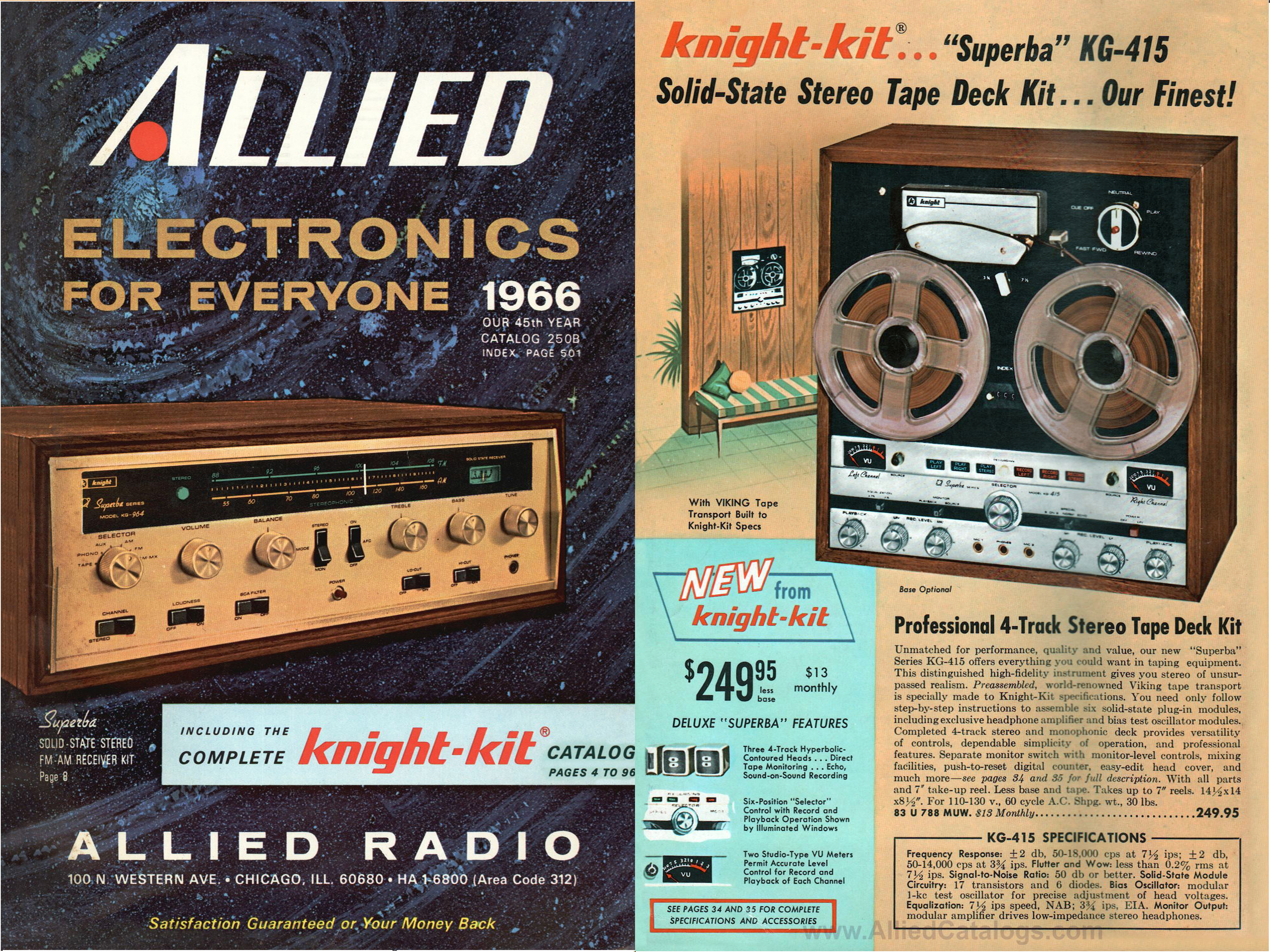 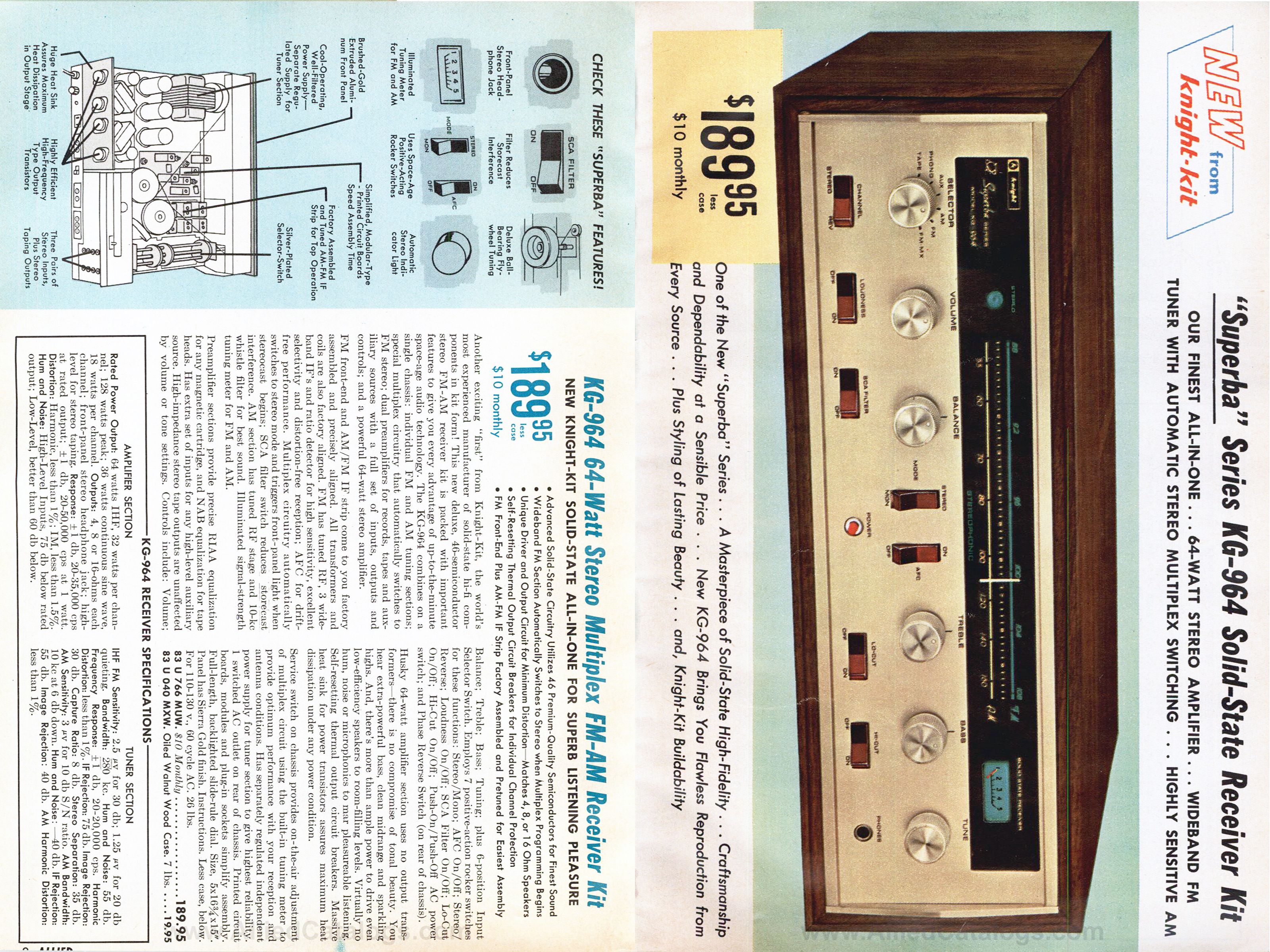 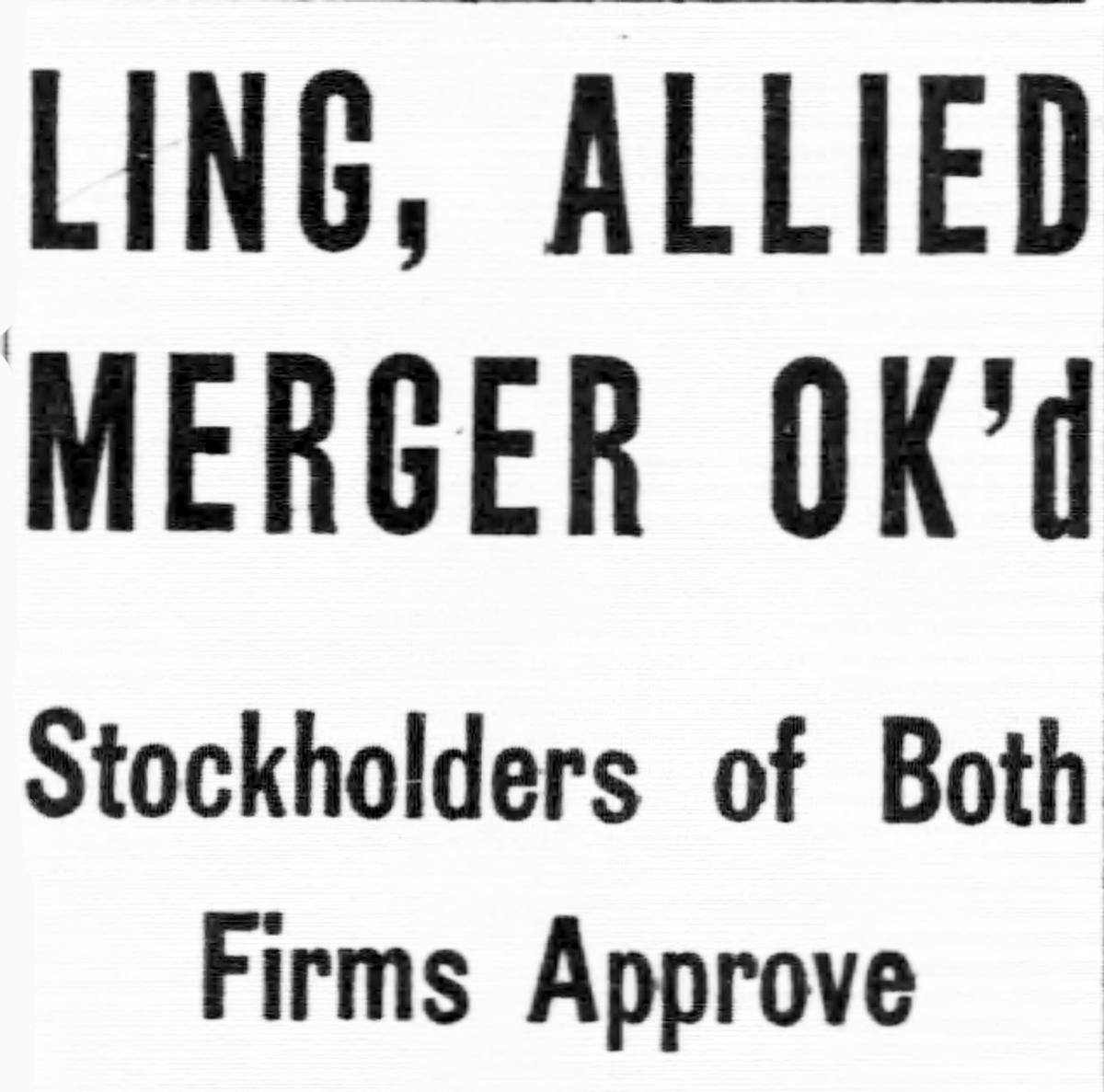 The acquisition of Allied Radio corporation by LTV Ling Altec, Inc., was approved by shareholders of the two firms yesterday.

Under the agreement, LTV Ling Altec will acquire Allied for 992,000 LTV Ling shares and will assume all of Allied’s liabilities. Allied will distribute 0.891 share of LTV Ling Altec common for each Allied share.

The agreement provides that after the transaction is completed, Allied stockholders, under certain conditions, would realize $22.22 a share for up to 80 per cent of the LTV Ling Altec shares they are entitled to receive. 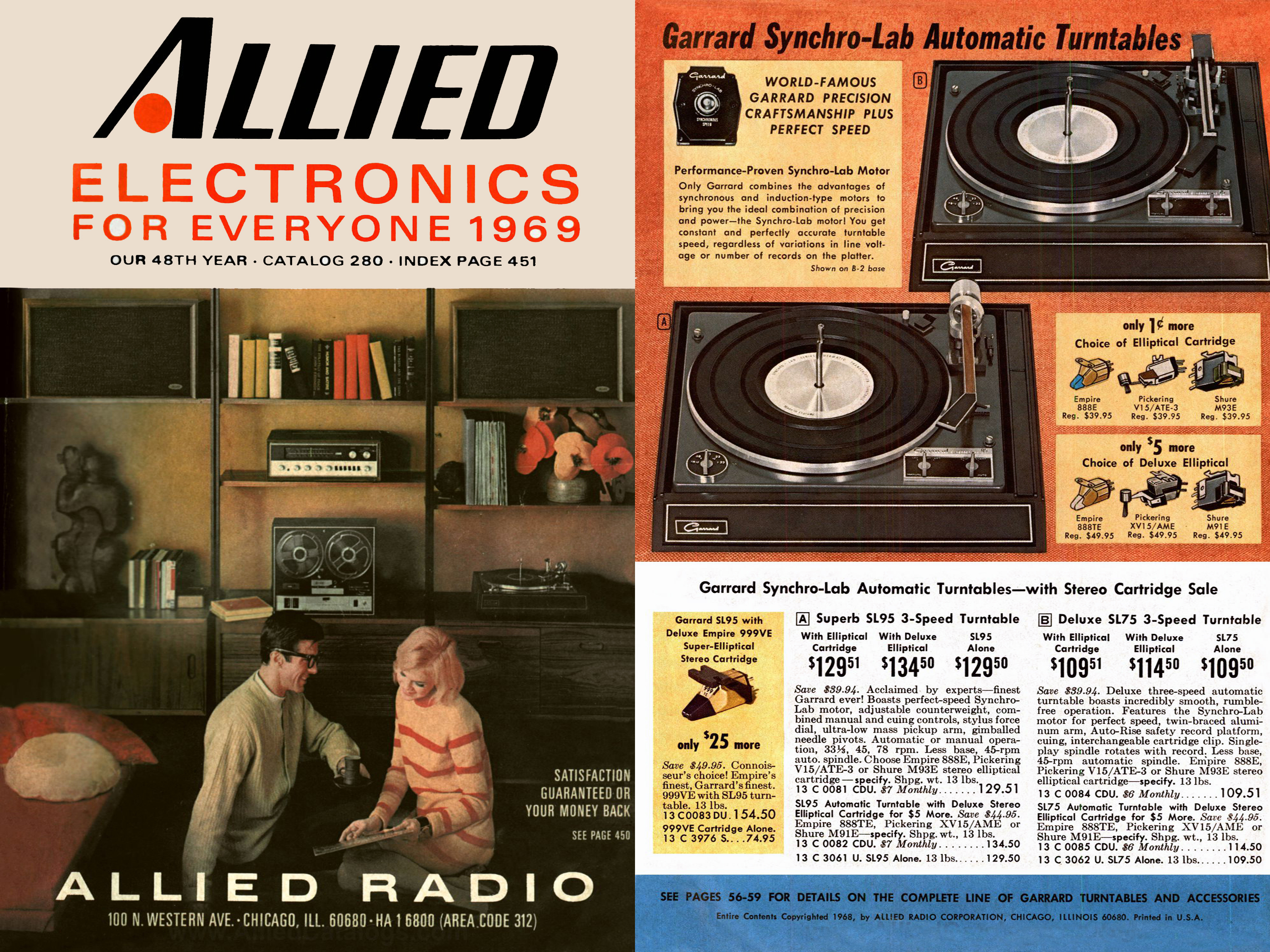 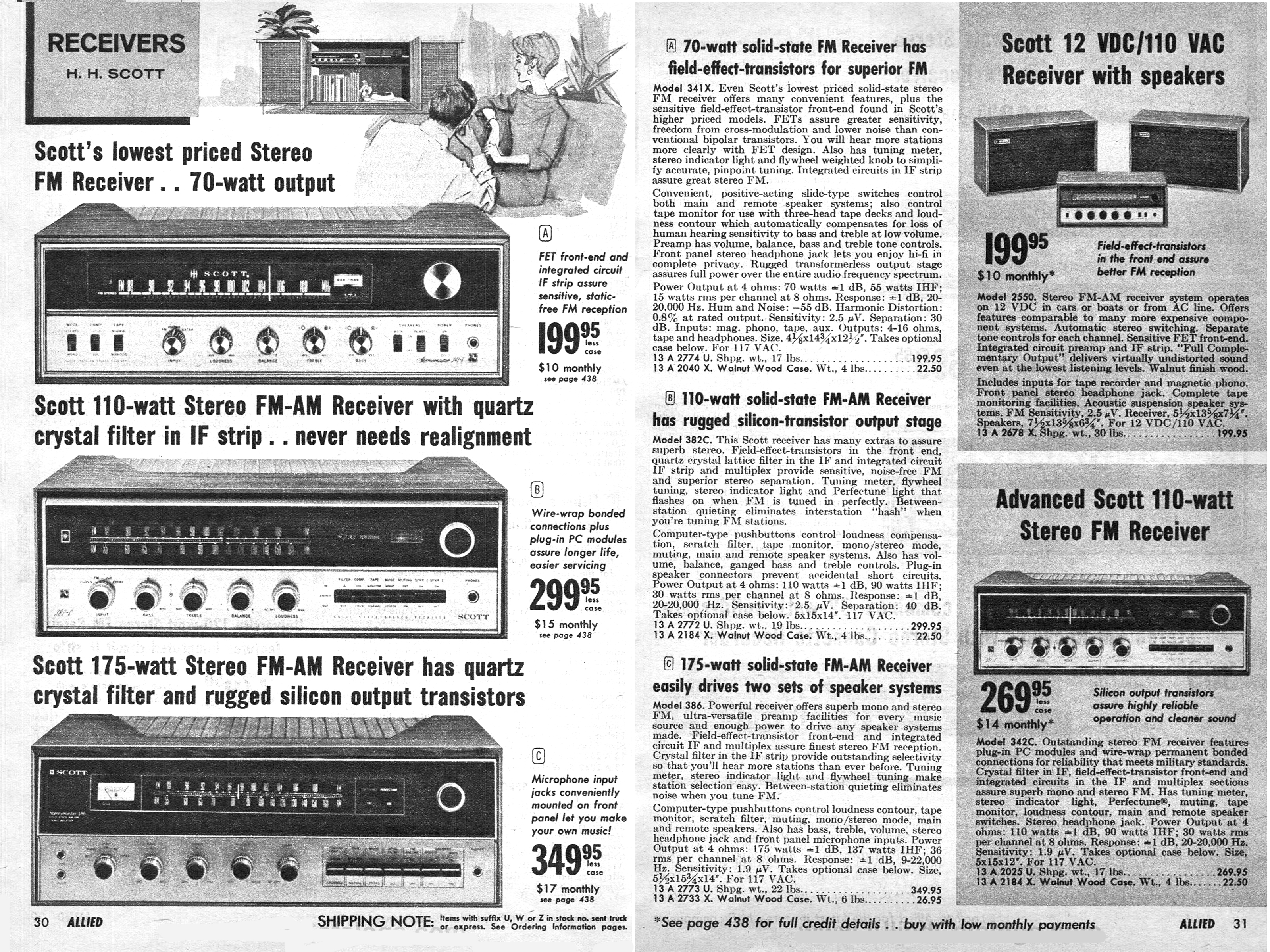 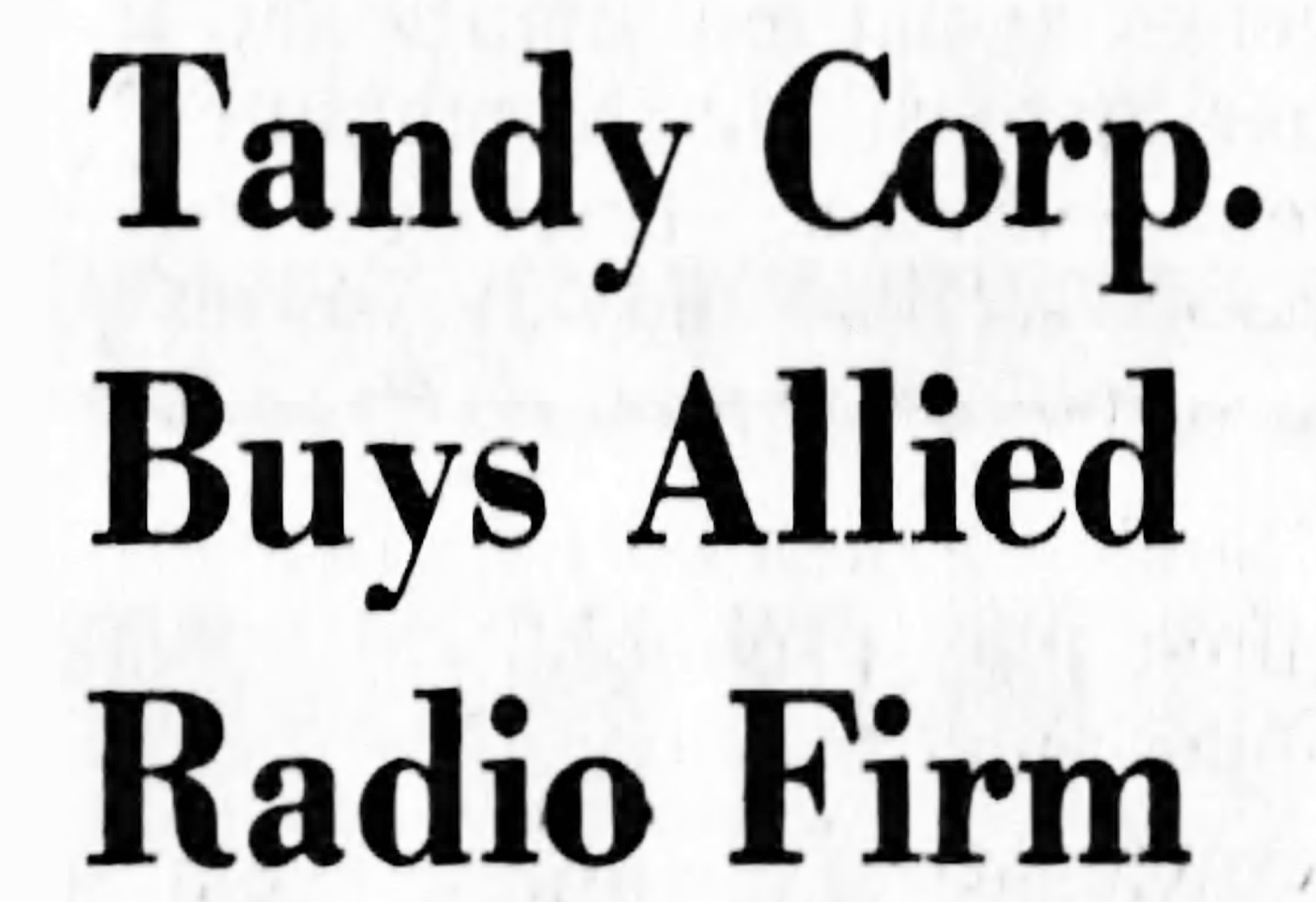 The exact price is subject to audit adjustments. The change of ownership was made effective March 29, the spokesman said.

Allied Radio Corp., maker of Electronics products, has been operating as a wholly subsidiary of LTV Ling Altec.

Allied accounted for more than half of Ling Altec’s sales of $156,000,000 last year, the spokesman said. Ling Altec is a subsidiary of Ling-Temco-Vought Inc.

Tandy Corp. is a manufacturer and marketer of recreational and leisure products and operated a chain of electronic products stores under the name Radio Shack. Tandy sales for the year ending June 30, 1969, were $180,000,000.

John L. Cockrill, president of LTV Ling Altec, said “while Allied Radio was considered to have a good long-term potential, the offer was sufficiently attractive that the board of directors considered acceptance of the offer in the best interest of the stockholders.” 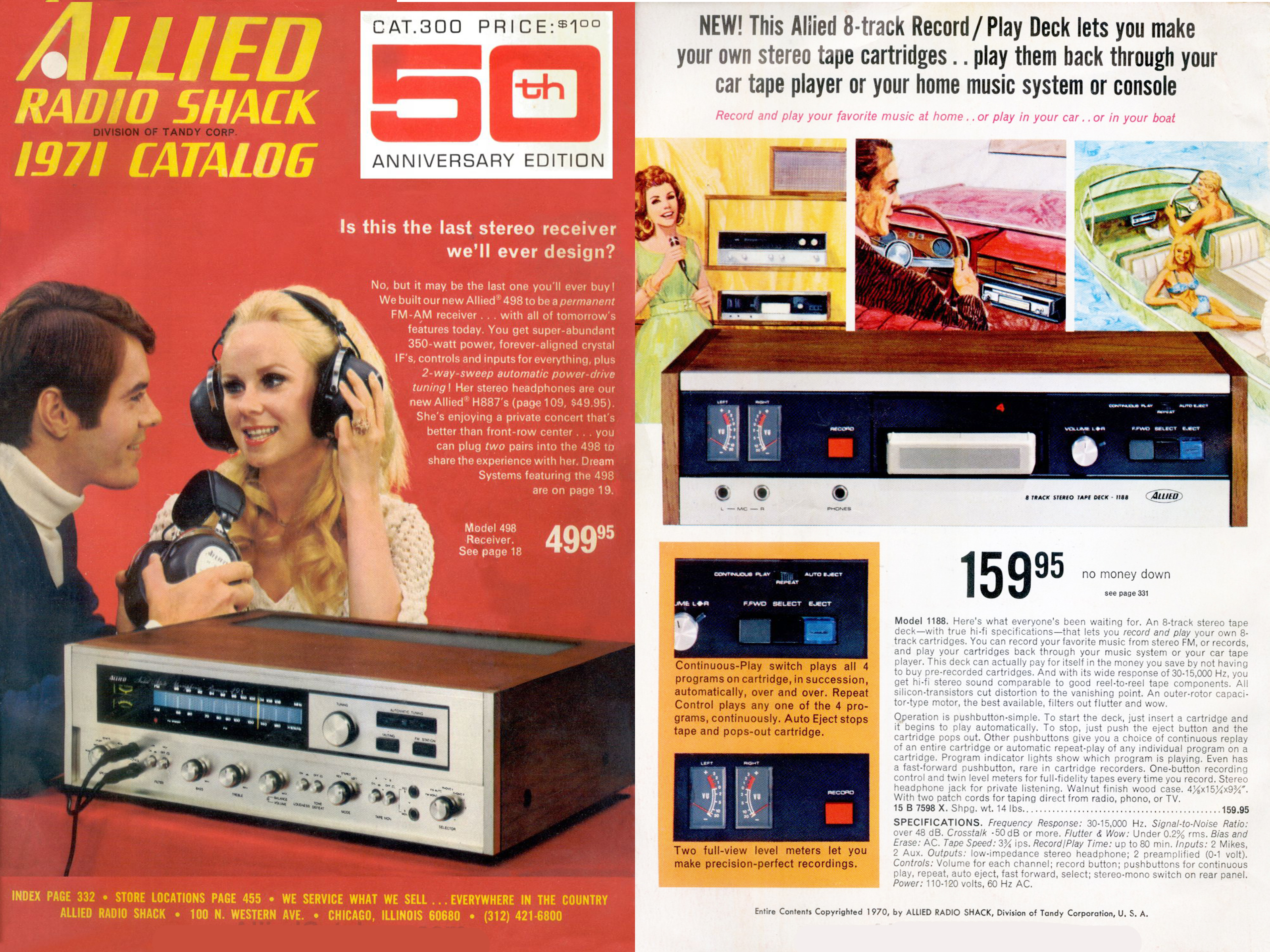 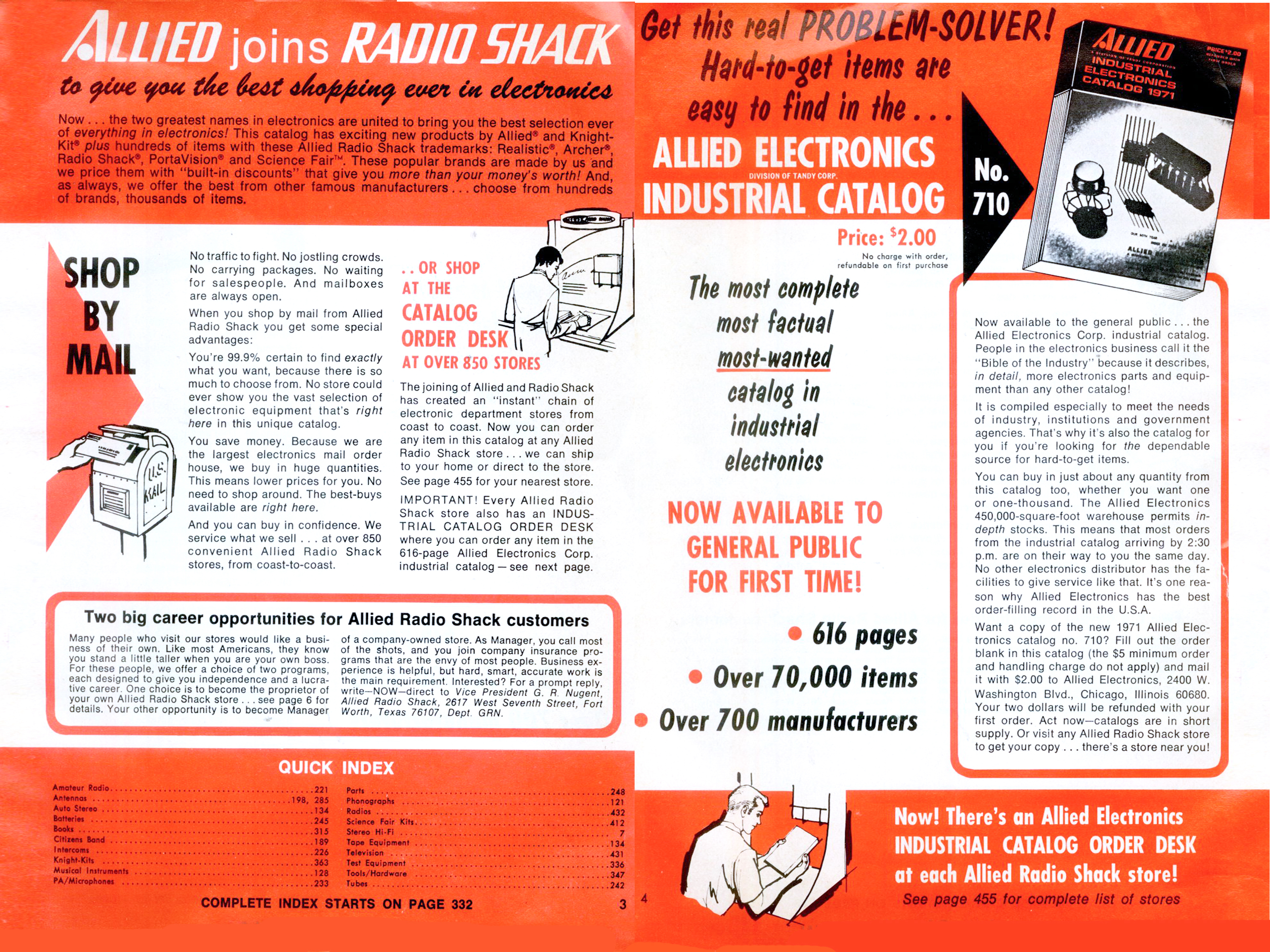 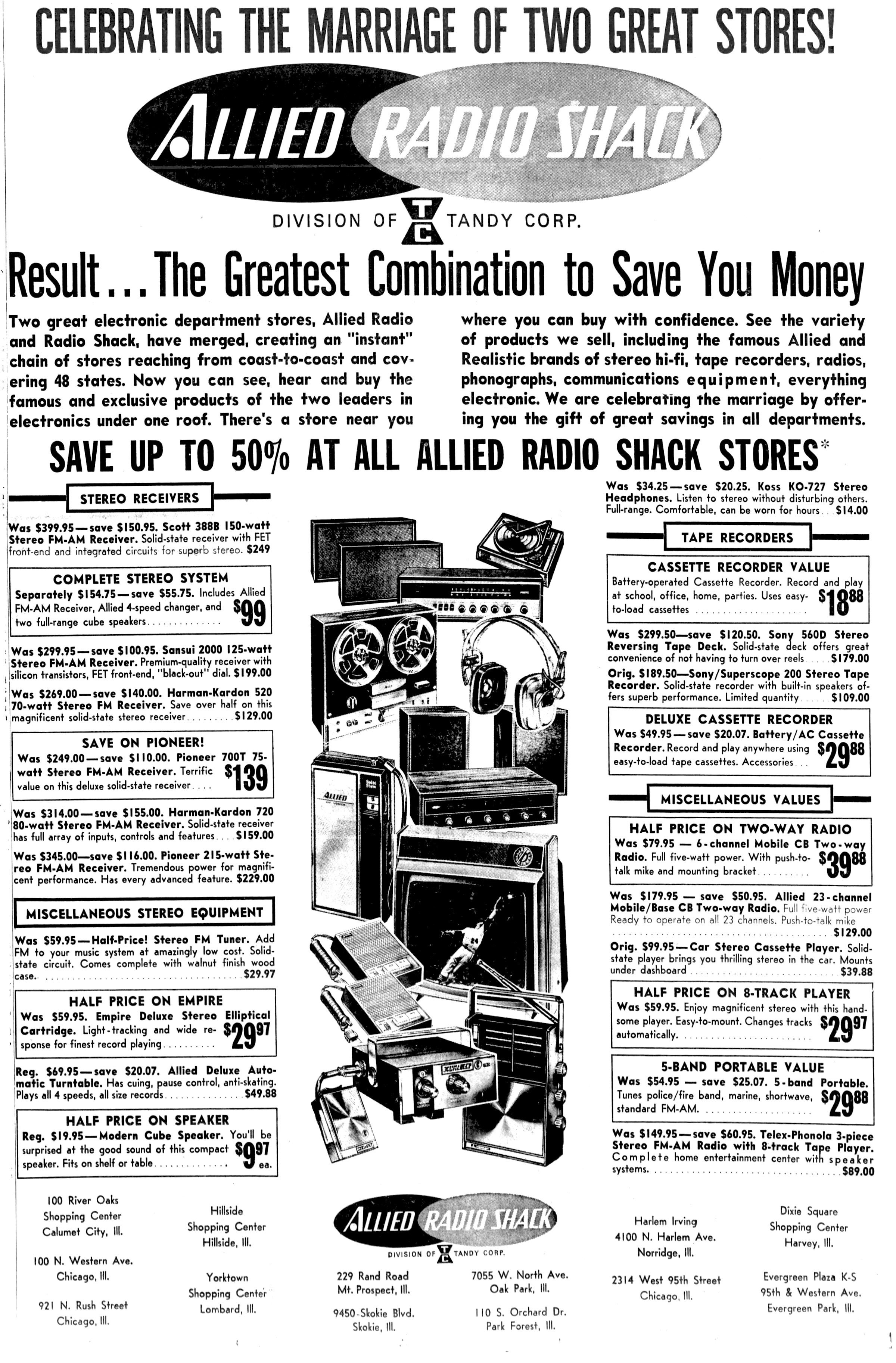 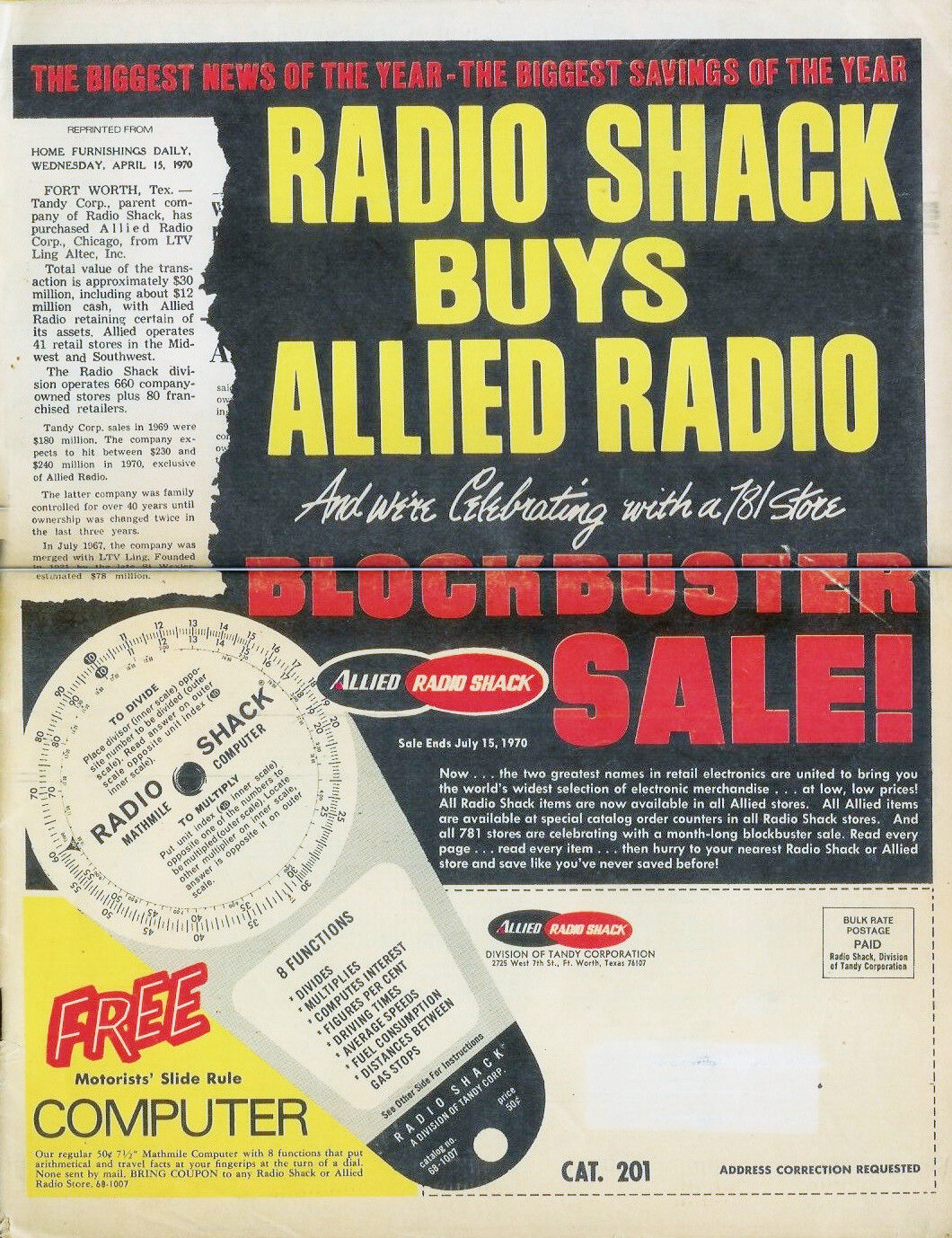 In 1993, Allied is acquired by Avnet. Two years later, they become the first company to release a catalog in CD-ROM.

On the brink of the new millennium, UK-based Electrocomponents buys Allied in 1999, now operating 69 sales offices and posting sales of $178 million for the year. Allied moves to a new facility in Fort Worth in 2007, complete with a 300,000 square foot warehouse and 57,000 square feet of office space.