The Craftsman trademark was registered by Sears on May 20, 1927. Arthur Barrows, head of the company’s hardware department, liked the name Craftsman and reportedly bought the rights to use it from the Marion-Craftsman Tool Company for $500. 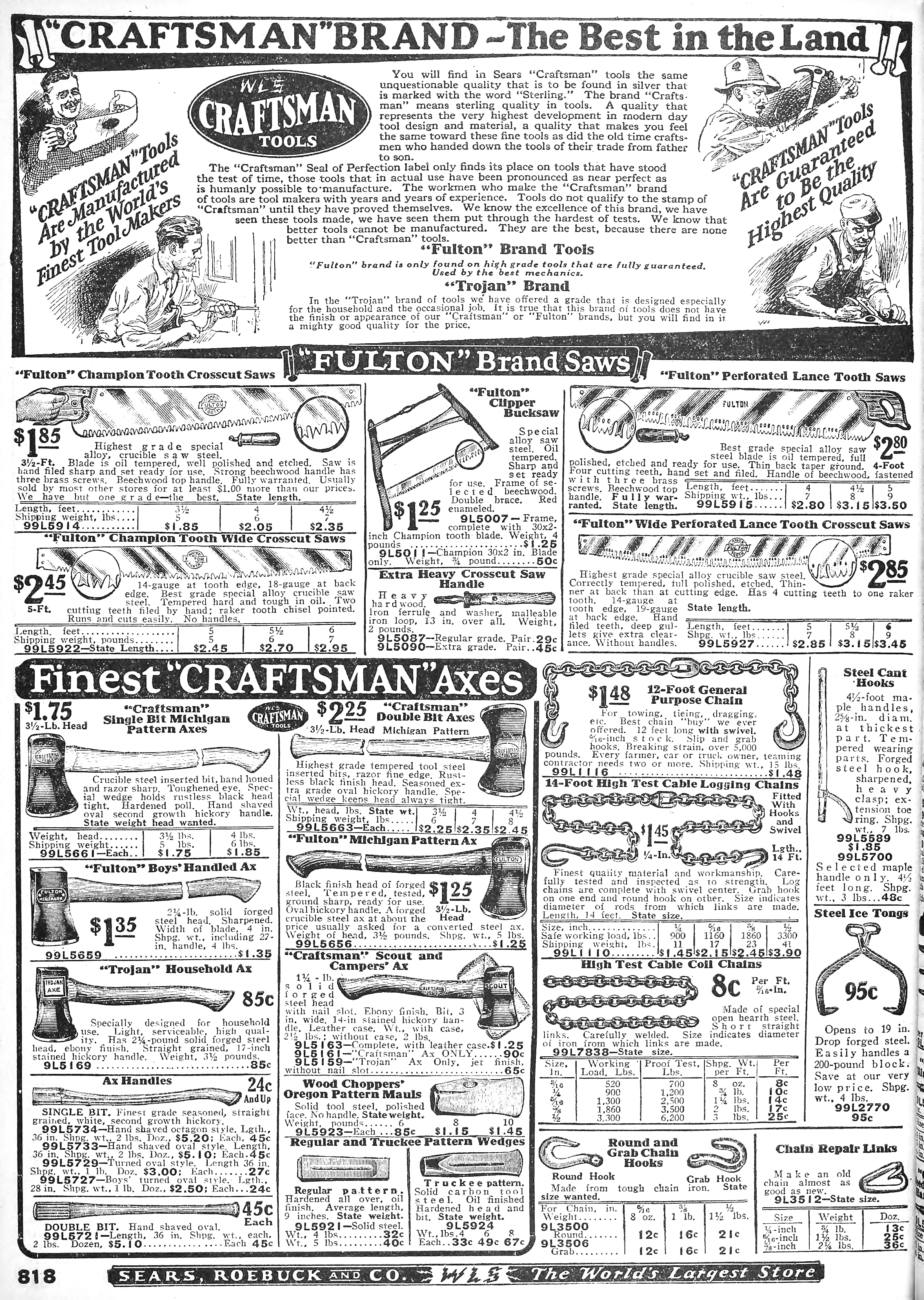 When Sears promoted Arthur Barrows to West Coast Manager, he hired Tom Dunlap to take over the hardware department. Dunlap immediately upgraded the quality of the tools. America had moved into the automobile age and Dunlap recognized that Sears needed a line of high quality tools to meet the new demand. He threw out the big, clumsy, cast-iron hammers and wrenches, and the soft screwdrivers leftover from the days when farmers were the company’s biggest customers. 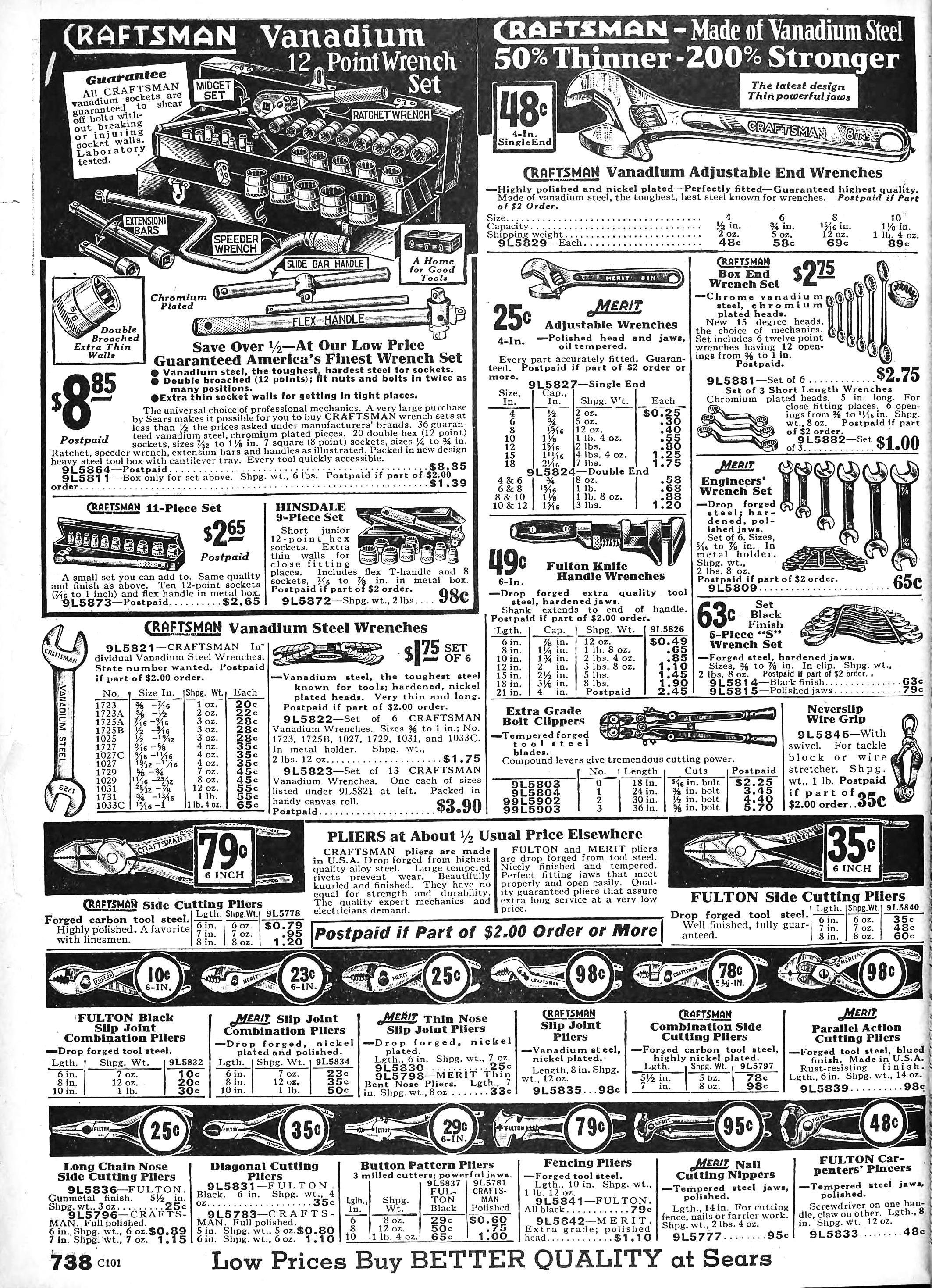 Tom Dunlap understood the pride mechanics took in their tools and how they meticulously cleaned them each day. To improve the look of Craftsman tools, he added chrome plating to improve the finish, color, and trim on wrenches and sockets. He also added high impact plastic handles on screwdrivers. Dunlap’s former boss, Arthur Barrows did not think it made sense to chrome plate a tool that someone would “slug the hell out of”, but Dunlap’s persistence paid off when sales of the full-polish, reliable, good-looking, and easy-to-clean tools increased six times the next year.

From the late 1930’s till about 1950, Sears produced a mid-quality line of tools called “Dunlap.”

The first Craftsman power tools were featured in the 1929 Sears catalog. These power tools were recognized in 1938 for helping to build the largest adobe building which was the Rocky Mountain offices of the U.S. Forestry Service. After this, the Chief Forestry Engineer declared Craftsman tools as a permanent part of the Service’s shop equipment.

In 1947, Craftsman razor blades were debut and mark a rare failure in the Craftsman line. The razor’s publicity campaign fails when razor blades sent to store managers arrive rusty due to faulty preservatives.

A trademark associated with Sears Craftsman hand tools is that they come with a Lifetime Guarantee. The warranty states

If this Craftsman hand tool ever fails to give complete satisfaction, return it to any Sears store or other Craftsman outlet in the United States for free repair or replacement. This warranty gives you specific legal rights and you may have other rights, which vary, from state to state.

This warranty program does not require a receipt or a dated proof of purchase. In other words, Craftsman tools are guaranteed forever.

Beginning in 2010, hand tools manufactured for Craftsman by Apex Tool Group such as ratchets, sockets, and wrenches began being produced overseas (mainly in China although some are produced in Taiwan), while tools produced for Craftsman by Western Forge such as adjustable wrenches, screwdrivers, pliers and larger mechanic tool sets remain made in the United States.

On January 5, 2017, Stanley Black and Decker announced it had agreed to purchase the brand in a deal valued at approximately $900 million. Under the terms of the deal, Stanley, Black & Decker will pay $525 million when the deal closes and $250 million at the end of the third year after closing. Sears will also collect a percentage of new Craftsman sales for 15 years after the deal closes. Sears will be able to continue selling Craftsman tools under a licensing agreement, royalty free, for the first 15 years. Afterwards, Sears will pay Stanley, Black & Decker a 3% licensing fee