A Magnificent Ornament for a State and Randolph Corner—The Commercial Building.
The largest office building in the burnt district will soon be commenced at the southwest corner of State and Randolph streets. It will be known as the Commercial Building and will occupy nearly one quarter of the block reaching south from Randolph street to the alley, and west from State street to the alley coming out on Randolph street, with the exception, possibly, of two small lots the owners of which have not yet decided what course to pursue. It may be that they will decide to adopt the same architecture as the rest of the block. The building will have a frontage of 195 feet on State street and 54 feet on Randolph. With the exception of the 107 feet on the corner, the buildings will be 41 feet front by 107 feet in depth, and if the two owners spooken of adopt similar plans the two stores on Randolph street will be included in this block, and will be 41 feet front by 107 feet in depth. The first 107 feet by 54 belong to George A. Springer, the next 20 feet south, and adjoining to W.R. Robeson, of Boston, the next 37½ feet to Joseph Matteson, and the southerly lot on the alley, 18½ feet by 95, yo T.S. Clarkson. The building will be four stories in height and faced with Cleveland sandstone and terra cotta cornice. It will be arranged for banks, offices and stores, and will cost $150,000. Plate glass will be used in all the front windows, from the basement to the fourth story. It will be ready for occupancy by the first of November. Part of the structure is already built up to the third story, and the portals already put up make a very massive and eleant appearance. Carter, Drake & Wright are the architects. 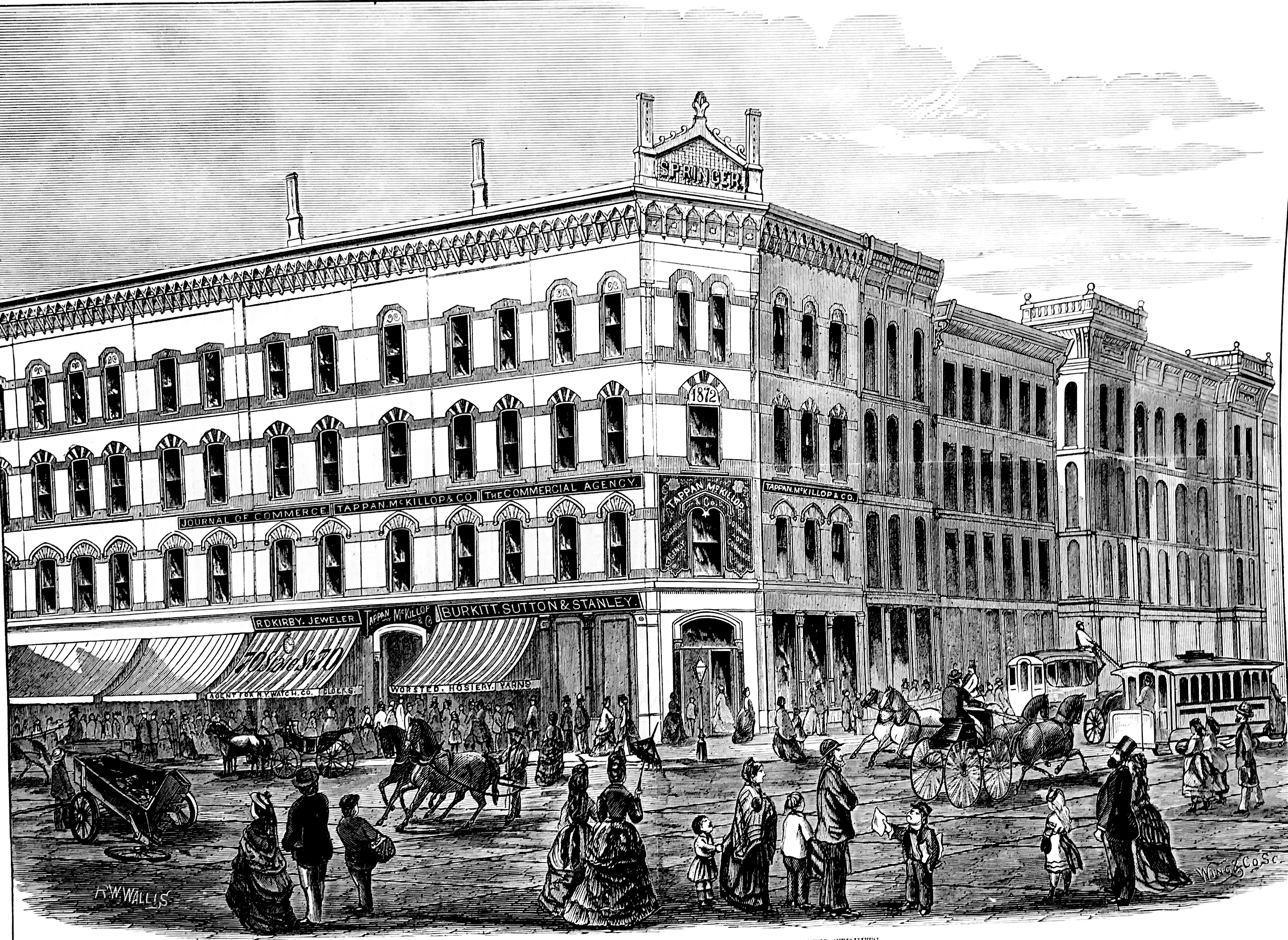 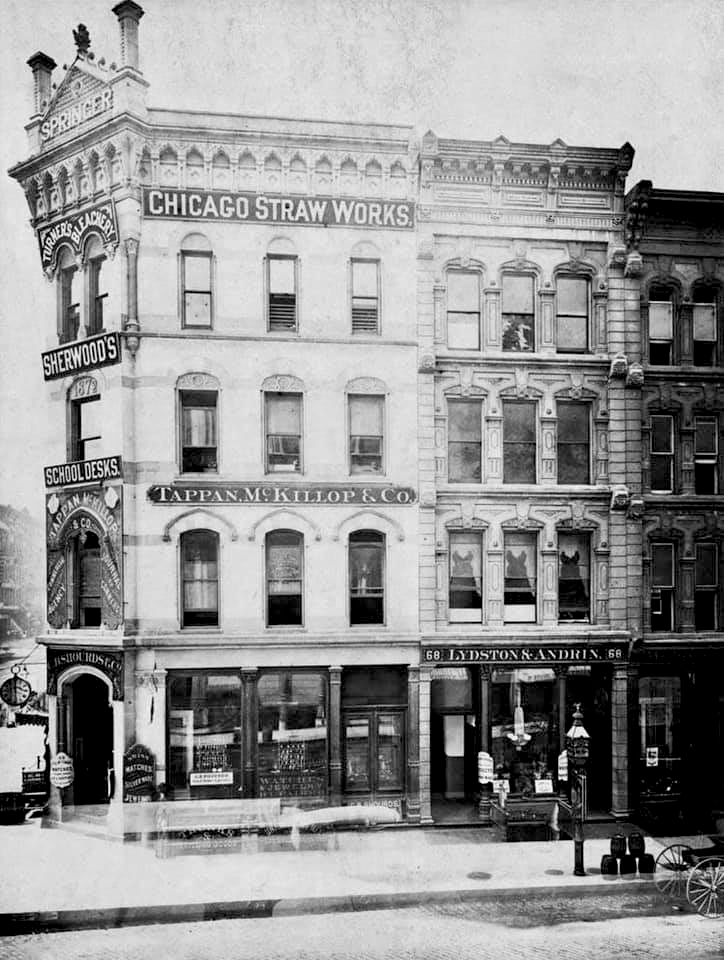 The block on the southwest corner of State and Randolph streets, formerly known as the Springer Block, purchased a year ago last January by Sidney Bartlett, is undergoing important changes. It is to be made six stories high. The inside has been almost entirely torn out and the rooms are to be rearranged to suit the convenience of the class of tenants who will occupy it—doctors, dentists, musicians, etc. This is a sort of occupants who have proved very profitable to the owners of the Central Music-Hall, near by. The expenditures on Mr. Bartlett’s building will be about $75,000. 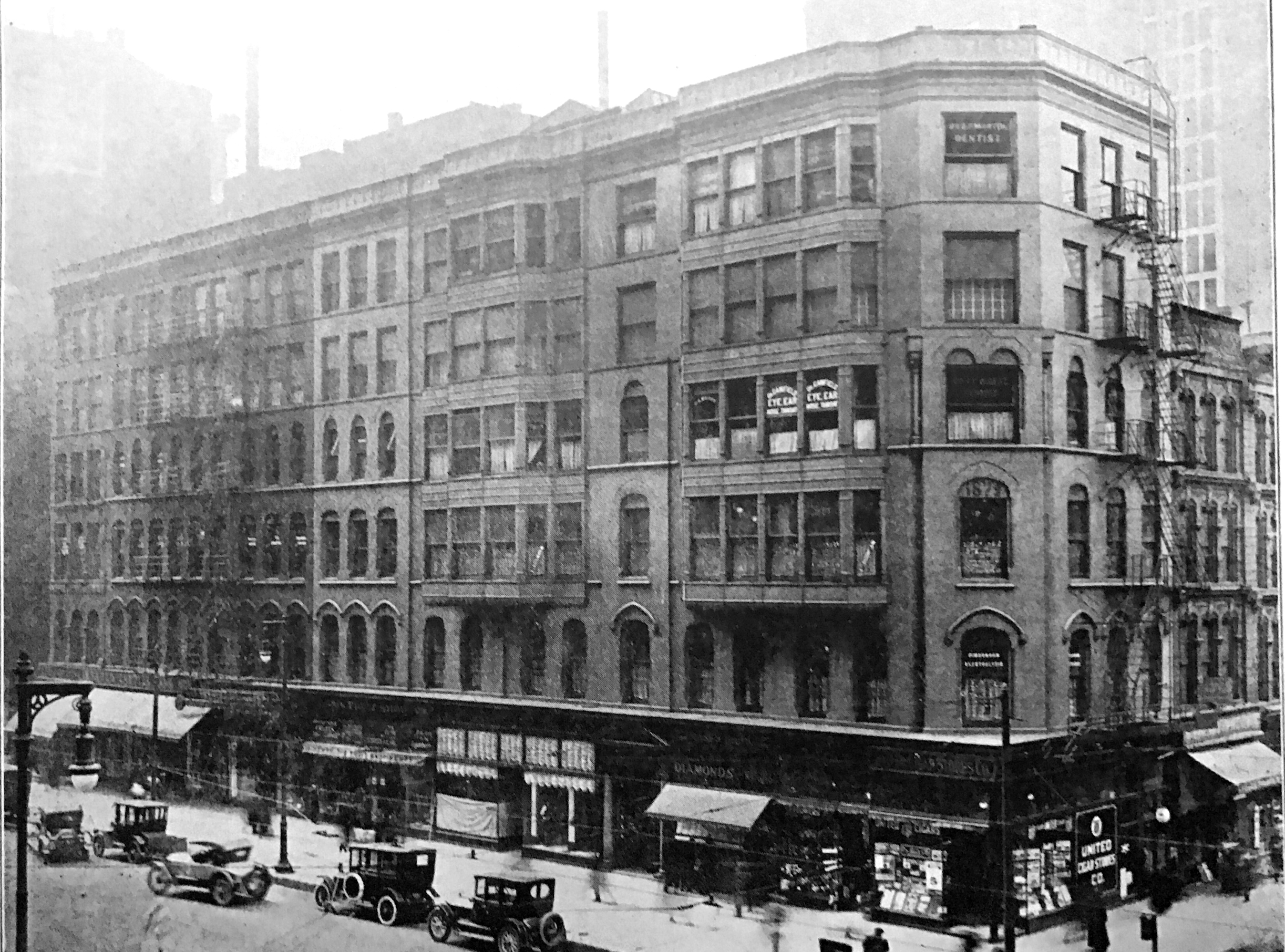 In 1888 the building was remodeled, adding two stories. Renamed Bay State and Kranz buildings. Photograph about 1910. 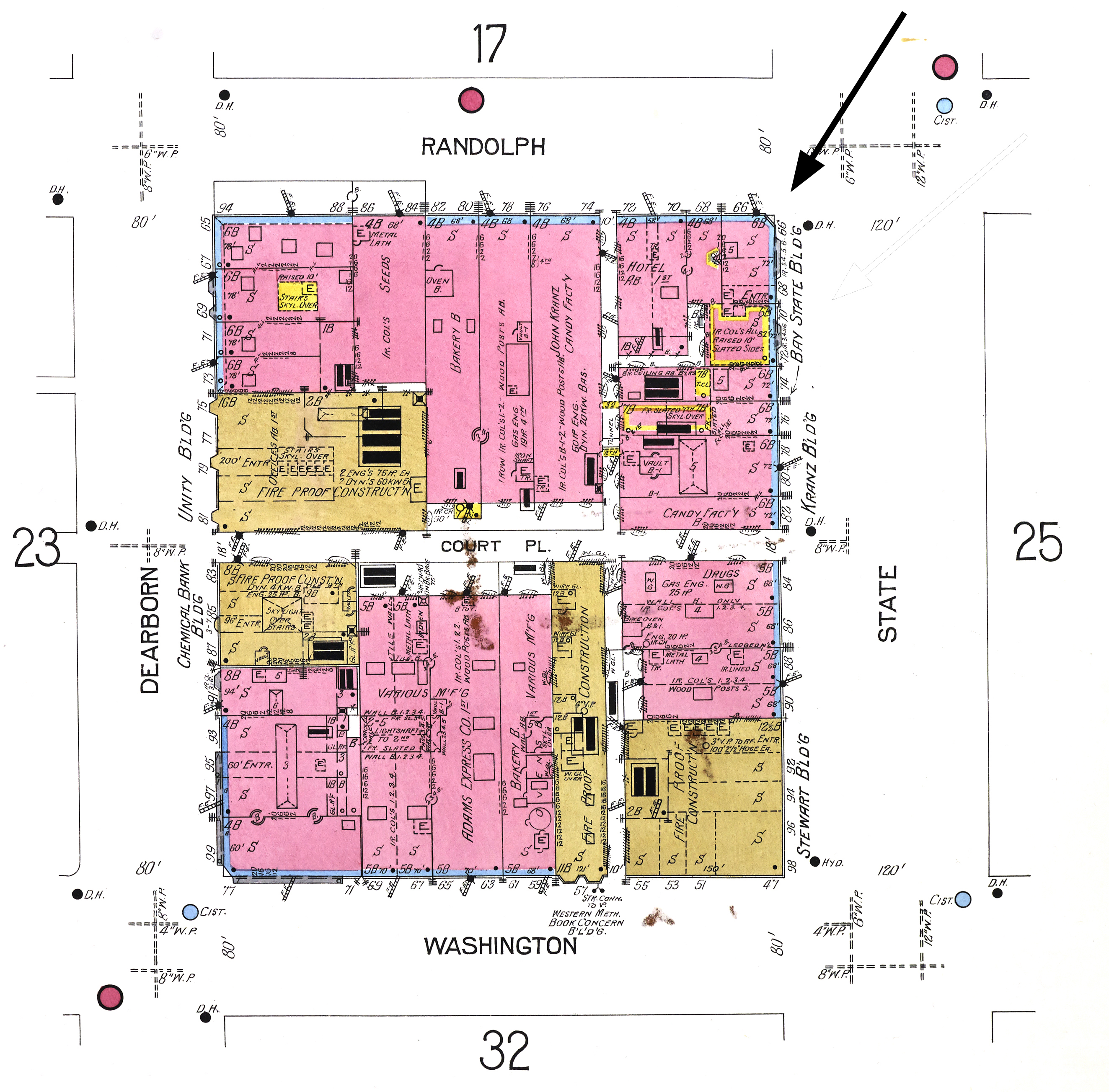 The building has one basement, and rests on spread foundations

Wall construction, finish and color: The walls are made of smooth-surfaced limestone, with small molded string courses between floors at the window sill levels. The northeast corner of the building is cut off diagonally, and was originally the main face. The 1872 date stone at this diagonal face has been covered with a large sign. The original ivory-colored stone and brown trim is visible on the Kranz portion of the building, but the Bay State portion has been painted gray. An assortment of store fronts and signs has obscured the lower two stories.

Over-all dimensions: 78 feet high (the four original stories plus the two added later). The north side is about 34 feet long, divided into three bays. The east side, about 100 feet long, is divided into twelve bays. The upper two-story addition of 1888 extends south, adding two stories to the building at 124 North State Street, which was not part of the original Springer Block, This building to the south at 124 North State Street and the Krana Building section of the Springer Block also share a continuous simple concrete cornice, apparently a recent alteration,

Openings: The windows of the second floor have segmental arched heads with Gothic labels. Third floor windows have segmental arches. The fourth floor windows have semi-circular blind arches with incised carving in the tympana. The windows are made of wood and are double-hung, with single light sash. Two large bay windows on the east side, made of iron, extend from the third through the sixth floor, and cannot date from before the 1888 addition.

Roof: The Bay State part of the building has a molded iron cornice with parapet, probably added later. 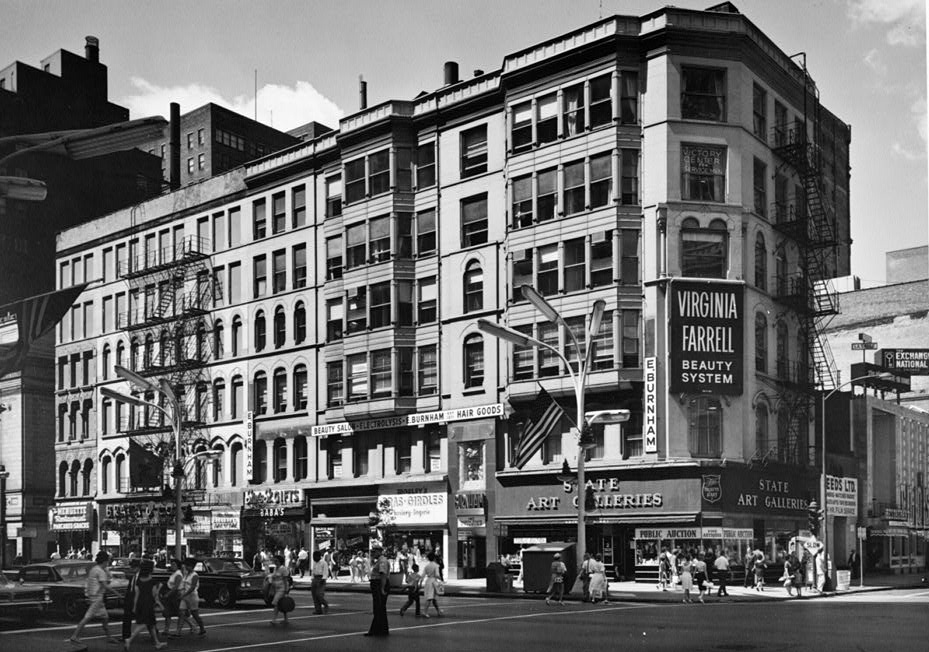 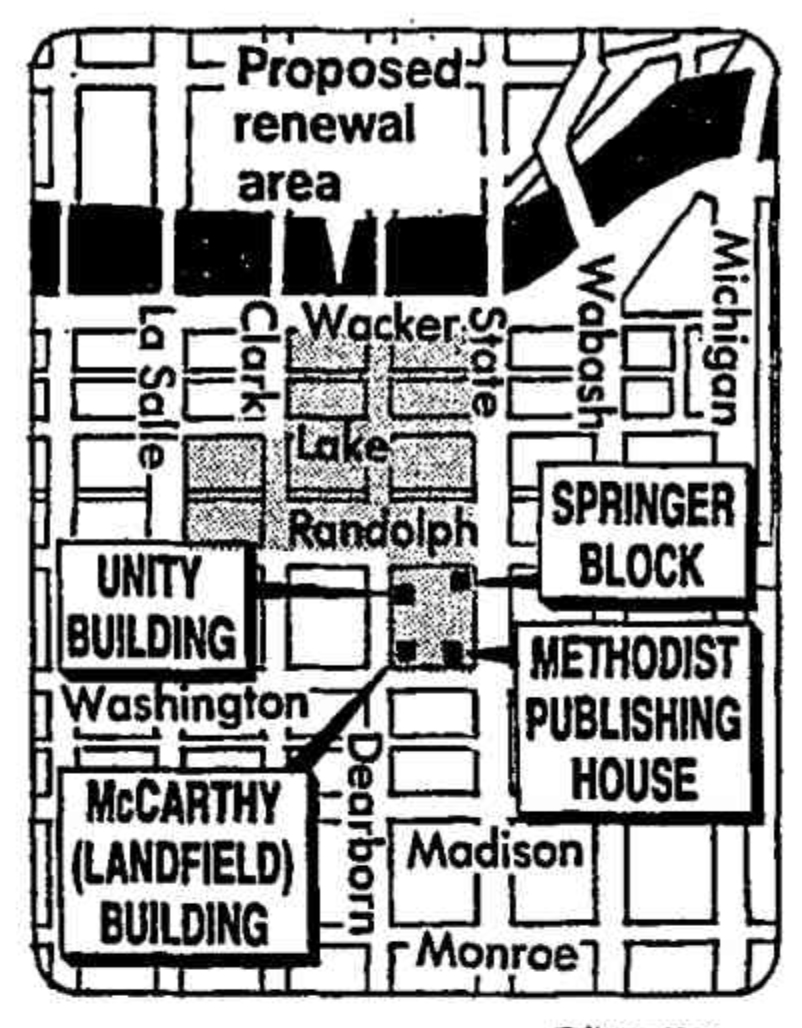 The Springer Block – a stretch of small buildings on the west side of State Street, reaching southward from the corner of Randolph Street. The council said the buildings are “of exceptional quality” for the period, apparently due to remodeling work by Louis Sullivan and Dankmar Adler in the late 1800s. They give continuity to State Street retail history, and if revitalized could be of great value to State and Randolph as a regular retail and entertainment center.”

McCarthy Building [also known as the Landfield Building]-the northeast corner of Dearborn and Washington Streets. “Designed by John M. Van Osdel, it is one of the few surviving buildings downtown dating from 1872, the year after the great fire. A fine example of the style of the period Very interesting in its juxtaposition to Civic Center plaza and nearby buildings,” the council said. 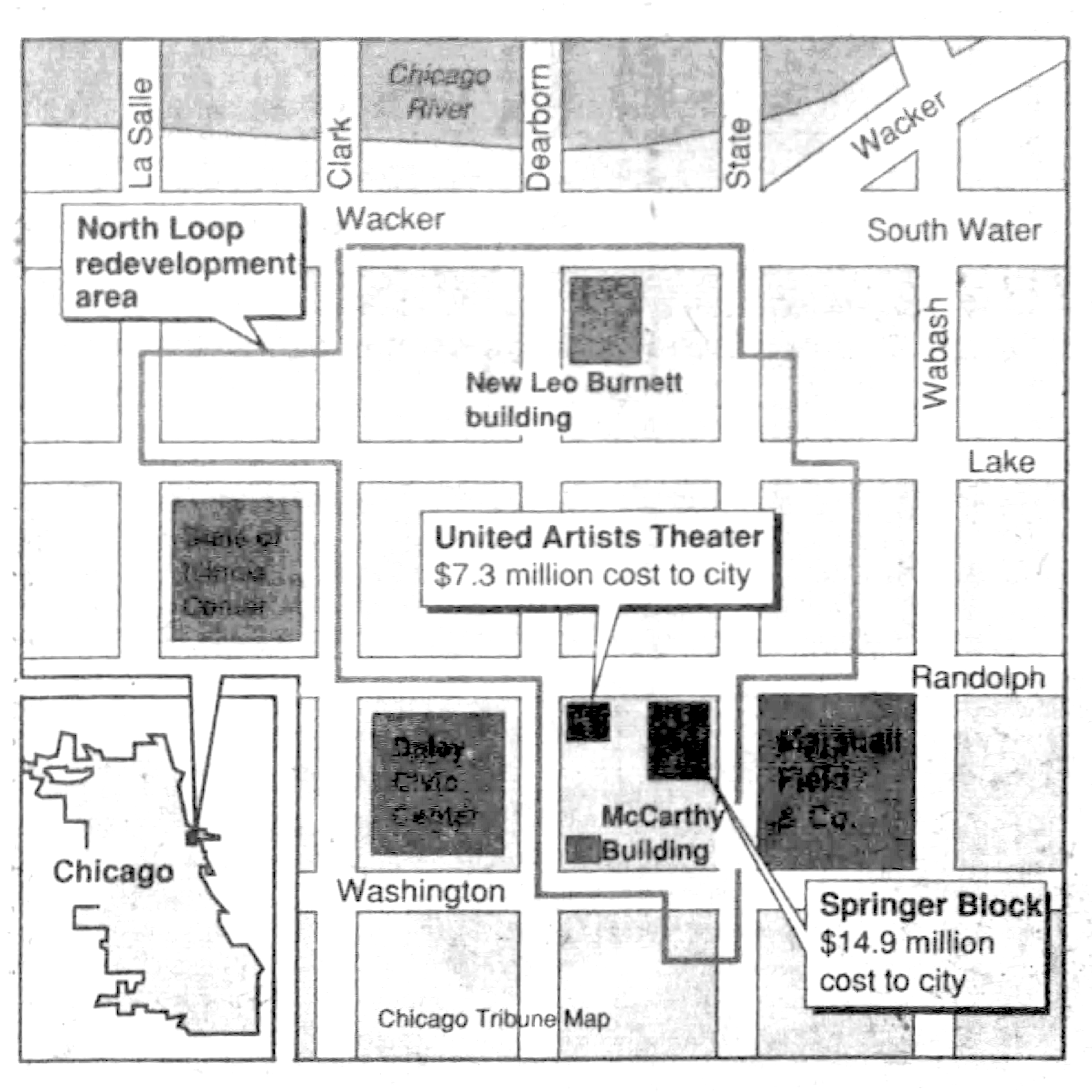 3 North Loop Developers to Get Windfall
The city is about to hand three of three of the city’s wealthiest developers a $24.4 million subsidy to build an office complex in the heart of the Loop—the largest renewal incentive in Chicago history.

The leaders of several civic watchdog groups claim the incentive, called a land “write-down,” is exorbitant. Some even contend that the office complex, or something like it, would have been built anyway, with no subsidy at all.

The developers were promised a subsidy five years ago, but its size could not be determined until Thursday, when the city learned how much it will cost to acquire property on the block east of the Daley Civic Center.

The city will pay the current owners $22.2 million for half the block under a condemnation agreement by Cook County Circuit Judge Earl Arkins.

The city must still acquire another quarter of the block. The remaining quarter is already owned by a three-devleoper partnership that proposes to erect a $400 million office-over-retail complex.

The partnership, called FJV Venture, agreed to pay the city $12.5 million for the parts of the block that the partnership didn’t already own.

The block, bounded by State, Randolph, Dearborn and Washington Streets, is to be the centerpiece of the city’s North Loop urban renewal project. To be designed by architect Helmut Jahn, its base structure will contain a glassy shopping arcade that will connect, in a visual sense, Marshall Field & Coo.’s State Street store with the Picasso statue on the Daley Plaza.

The concept behind the North Loop was for the city to condemn the many raunchy stores and theaters in the six-block zone, and resell the land to selected developers who, in return for a break on the land price, would build what the planners wanted.

Back in 1981, under then-Mayor Jane Byrne, the city floated $65 million in North Loop bonds-enough, it was thought, to buy and resell all six blocks. But the funds ran out after only two blocks, mainly because of administrative delays, high interest rates, and the inexorable climb of downtown real estate prices.

An additional $58 million in bonds was sold in late 1986 by then-Mayor Harold Washington`s administration, with $35 million in proceeds earmarked for the block east of the Daley Center, which planners call Block 37.

But once again the city encountered delays, one being the controversy over whether to save the landmark McCarthy Building at the southwest corner of the block. Meanwhile the price of prime Loop land rose from about $450 a square foot to the $565 and $600 prices agreed to on Thursday.

The high cost also raises a question of whether the city will have enough funds left over to acquire the Harris and Selwyn Theaters a block north on Dearborn Street. The city wants to buy the landmark theaters and lease them to the Goodman Theatre as part of a ”theater row” anchored on the east by the restored Chicago Theatre, 175 N. State St.

But with at least $37 million going to Block 37, it is uncertain whether the city will have sufficient funds left to buy the theaters. Nearly $17 million of the proceeds were set aside for interest payments. By the mid-`90s those payments are to be covered by property taxes flowing from a rebuilt North Loop.

An FJV executive insisted Thursday that the office project is not over-subsidized, even though the city will pay two-thirds of the $37 million land assembly tab.

”The size of the write-down is no bigger than what was expected,” said Michael Tobin, FJV project manager. ”The only way that property could be acquired is through public intervention.”

Tobin also pointed out that under its redevelopment contract with the city, FJV must contribute up to an additional $4 million to a North Loop preservation fund. The fund was used to rehab the Chicago Theatre and will be tapped to fix up the Reliance Building, a nearby landmark.

Michael Leroy, a condemnation lawyer hired by the city, said the sizable subsidy was justified because FJV is limited in what it can do on the property.

Not so, according to civic groups like Metropolitan Planning Council and the Landmarks Preservation Council of Illinois. Both protested when FJV, after first promising to save the McCarthy Building, convinced city officials last year to rescind its landmark status so the partnership can eventually knock it down.

But a more fundamental critique of the Block 37 deal comes from critics such as Arthur Lyons, head of the Center for Economic Policy Analysis.

“Redevelopment would have happened there a couple of years ago if the city hadn`t gotten involved,” Lyons said. “I call it planning blight. I`m disappointed that Harold Washington didn`t call off the whole thing.”

The late mayor had close ties with one of the FJV principals-Bernard Weissbourd, chairman of Metropolitan Structures Inc. Weissbourd was one of the few white businessmen to back Washington`s long-shot 1983 camapign. The other two firms in FJV are the Levy Organization, headed by Lawrence Levy; and JMB Realty Corp., headed by Neil Bluhm and Judd Malkin.

The big winners Thursday, however, were the owners of the United Artists Theater, 45 W. Randolph St., and the five small shops that wrap around the southwest corner of Randolph and State Street.

Under terms furnished by their attorney, Thomas Burke, Plitt Theaters Inc. will be paid $7.3 million for its dormant movie house, and a partnership called SIDCOR will get $14.9 million for its buildings, including the century-old, Springer Building, once remodeled by architect Louis Sullivan.