The Chicago Magazine, The West As It Is, published by John Gager & Co., and edited by Zebina Eastman, was devoted to literature, biography, historical reminiscence, etc., profuselv illustrated with engravings relevant to the text. The first number was issued March, 1857, and therein it was specified that the projectors and publishers contemplated an exemplary longevity therefore, but after the issue of the March, April, May and June numbers, the July number was omitted, and with No. 5 in August, 1857, The Chicago Magazine suspended, greatly to the loss of the literary interests of the city, as it was ably conducted, and its historical sketches, biographies, etc., were exceedingly valuable and accurate

Founded by the Mechanics’ Institute, an organization for night study, the object being partly to secure exchanges gratis for its library. 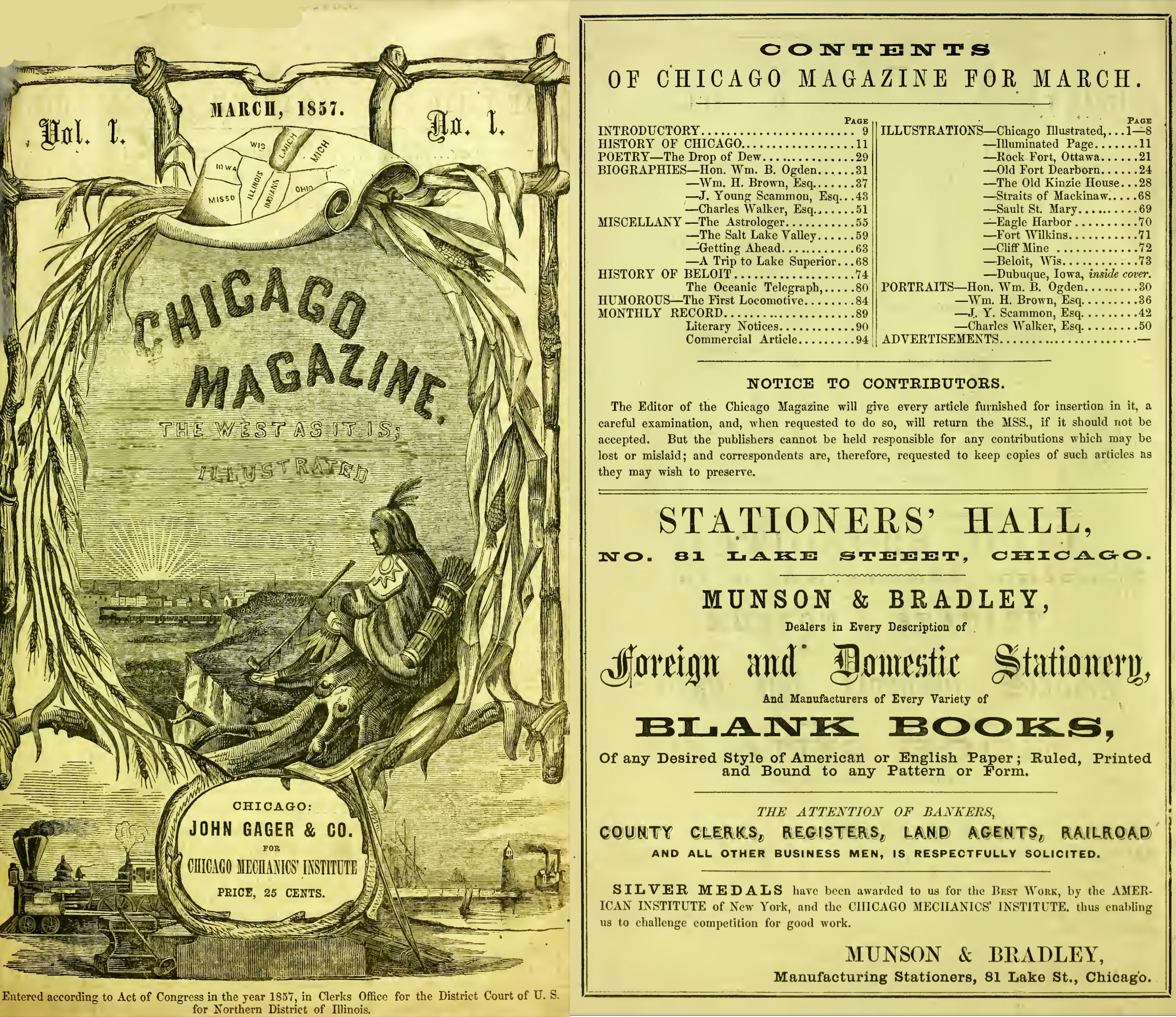 INTRODUCTORY.
The Association in whose name this Magazine is published, have undertaken this work they trust, with a ecnsciousness of its responsibilities and the difficulties that must be encountered. But the self-evident importance of a publication of this kind is their justification, and their reliance for the support that will be needed for its continuance.

We are conscious that the world is full of Magazines, and various periodical publications, enlisted for the advocacy of every department of human knowledge and human progress; that there are a number of very valuable and popular monthlies, which flow into every ramification of society, forming an. apparent monopoly of matrazinedom so that, it would seem, there is not room enough even for one more in the world’s literary omnibus. Well, if it be so, we are content to take an outside passage, for we belong to that particular genus of enterprises that likes an open sea of experiment an open range, with vision unchecked, in a pure outside atmosphere. Like the outside rider on the slow coach of exploration over our, new western regions, in days not long gone, we are conscious of our position that we are in a great country, where there is room enough for all, the largest liberty for every body, and every thing, with a fair chance of success to all; and in the characteristic Western phrase, “the largest number of persimmons to the longest pole.”

Our title sets forth tliat this is to be a Chicago Magazine, and that it is to portray the West as it is. There is a concentration of glorious destiny in a happy baptism. No genius wearing the cognomen of Scroggs, can ever bear the standard of pre-eminence in this age; and John Smith, we will warrant, though he may help to fill the police reports, and may ascend to the dignity of a Justice of the Peace, will never be President of the United States; and Laura Matilda is hopelessly environed in her sphere of the sentimental novel. If we have attained the true region of manhood in the selection of our title, we shall consider our christenin;j; propitious, and an assurance that the battle is half won. We believe failure was never yet wedded to Chicago. And the Chicago Magazine has a ring of vitality about it, which will distinguish it from all soft metal—has a pre-ordained character of respectability, and a guarantee of success—while Literary Magazine, or even Western Magazine, will go quietly to the death-bed of indifference. The West as it is, is a pass word that will go like the electric chain of thought from one end of the Union to the other. Chicago and the West as it is, have become national, whatever may be the conclusions of philosophers in regard to the character of political parties.

We propose to fill these pages with such matter in the aggregate as will make this publication a Chicago-Western Magazine. We shall infuse into it those elements of character that will make it known as a product of this locality. We shall aim to make it a vade-mecum between the West and the East—a go-between, carrying to the men of the East, a true picture of the West, which will satisfy their desire for information on the great topics connected with this part of their common country. We therefore bespeak for our work, a place in the Eastern market, and some offset there to the competition we must meet with in the circulation of Eastern periodicals in the Western field. The West will learn to patronize this monthly for the love of its own ideas;—the East will read it to get that knowledge of us, which they cannot get from any other source.

The first great department of our work is therefore to portray and illustrate the West. We shall gather every month, from the thousand objects of interest in its past history, present growth, future promises, and in its natural scenery, subjects for these illustrations. Some one or more important town will be daguerreotyped monthly in features, and recorded in history upon our pages.

The Historical part of the work is a leading one. We have opened in this number the first pages of Chicago history. This will be continued till the picture is filled up, ground-work, outline, principal figures, minute detail, the horizon and landscape in the distance, and the over-arching of its glorious future. Every town and locality has its unwritten history. The time has come, is rapidly passing, when this history should be made up, and recorded; before the men now living, in whose memory it is treasured, shall die, and the record perish. It is one of the objects of this Magazine to preserve these unwritten histories.

The commerce of the West is becoming the controlling power of the nation. We shall speak for that commerce all that an enlarged support from that money-power will enable us to speak. According as we shall thus be made able to do, we shall post up the Great Ledgers of Trade and Finance of the West, and transcribe for constant use its Day Book of transactions.

The Railroad enterprises of the West, are the main-springs of its progress. Into our record of Improvements they must therefore enter largely. We have it in our purpose, if our Railroad companies will grant us the facilities, to give the history of each, with illustrations and views of all the important towns and places of interest on their respective lines. The information that we shall be enabled to give in this connection, and in regard to the advantages of settlement, will be of great value to the Emigrant. All people in the East who expect to make homes in the West, and those who already have friends in those homes, now made and making, will be profited readers of this Magazine.

This publication is issued by a professedly Mechanical Institution. An institution of this kind in this fast and expansive country, is homogeneous with every progressive idea. It is not out of the line of its privileges, when it becomes the sponsor of a work of the amplified character of this periodical. We have already, by natural affinity, the sympathy of all the mechanical classes. No one comprehends the vastness of the mechanical enterprises which have grown up within a few years in the West—those of Chicago being the prototype of all. The mechanical establishments, improvements in their various branches, inventions in new machines, and devices to secure to man a complete control of all the physical powers of nature—will receive marked attention and be amply illustrated in our pages.

We have not room, in the limits of an introductory, to particularize the features of this Magazine. Indeed, we know not to what length, or extent, or in what direction we shall be called to go. We have a distinct plan in our minds, set forth here—the working out of that plan we shall leave for future months, with the full conviction that if we can push ourselves forward far enough to got the eye and the ear of the public, wc shall be tmderstood, and shall receive such a recognition as wc shall merit. 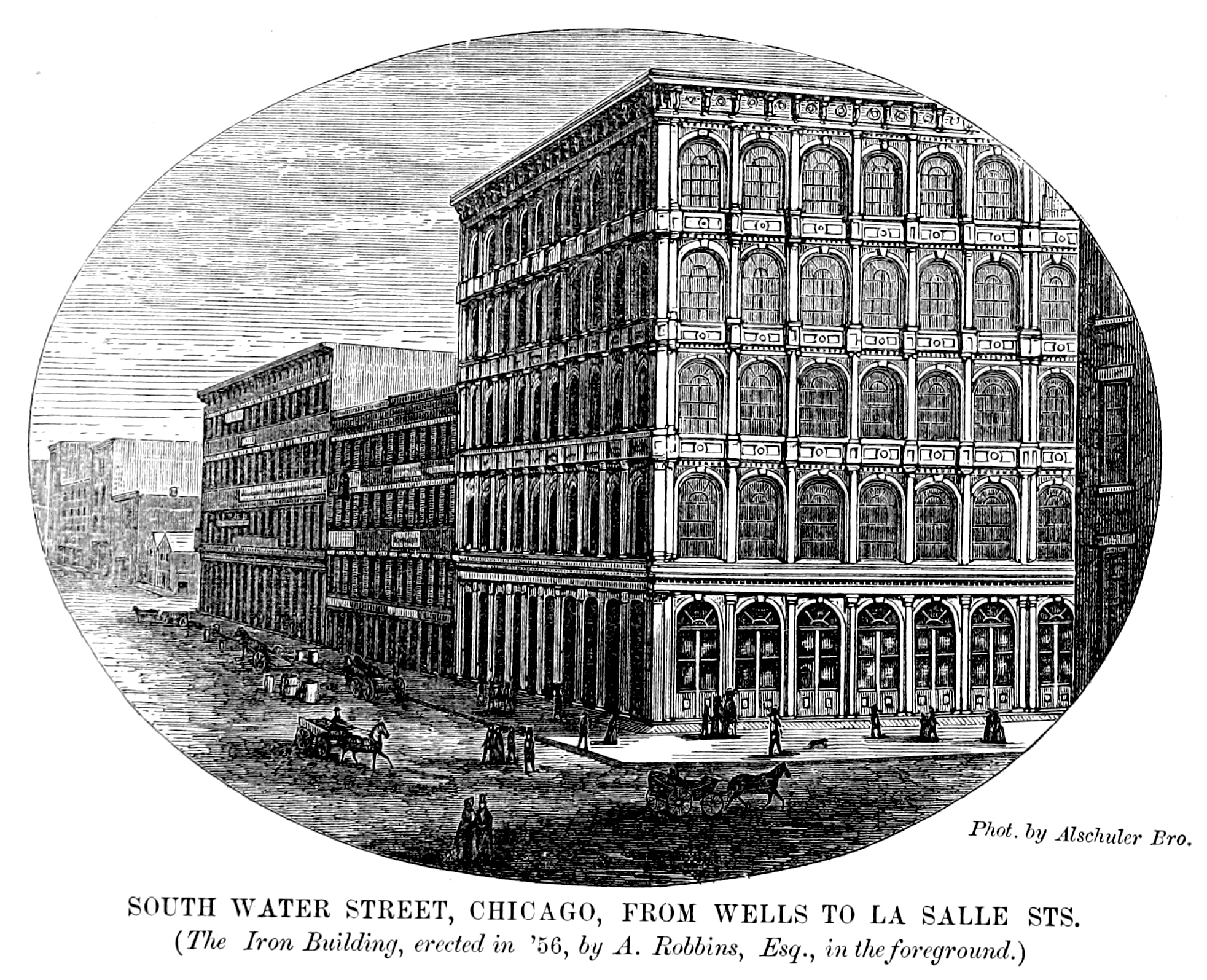 CHICAGO MAGAZINE FOR MAY.-The May number of this home periodical has just made its appearance, and though it comes late, still “better late than never.” The number before us contains continuation of the history of Chicago, with illustrations: a portrait and biography of Hon. Wm. B. Egan: an illustrated history of Aurora: a portrait and biography of James L. Langworty, Esq., and other articles of interest to western readers. There are four illustrations of new and magnificent business structures recently erected in our city, and a view of an Illinois farm scene. We are glad to notice a decided improvement in the character of the engravings in this number over most of those heretofore given.

THE CHICAGO MAGAZINE AND THE COMMON COUNCIL.—The last number of The Chicago Magazine—The West as it is, Illustrated, is embellished with an engraving of Hon. John Wentworth and a group of the present Common Council of Chicago. We have not heard that the Mayor has commenced a suit for libel against “the West as it is, Illustrated,” but, for the reputation of the city, we trust he will lose no time in doing so. There are not ten men in Chicago who could be bribed to vote for the possessor of the countenance here palmed off as belonging to the Hon. John. We recognize some features, certainly, but, as a whole, the majority of our citizens would suffer the severest physical torture before acknowledging that this picture bears any resemblance to their Mayor. Our first impression was that the plate had been borrowed from the publishers of the life of Return J. M. Ward, lately executed in Toledo-a work familiar to our traveling public. This hypothesis was defeated by a statement in the magazine itself, that the portrait is an old affair gotten up for the Democratic Review in 1849. The Chicago Magazine must be poking fun at us. The story is not at all probable. It taxes our credulity too far “by a long shot.” Failing, however, in our original surmise, the following lines flashed upon
us as the speediest solution of the whole mystery:

Now to Execution Dock
I must go, I must go,

Perhaps, however, Col. Wentworth will pardon the liberty that has been taken with his physiognomical scenery in this case when he comes to admire his picture adorning the Common Council group. This is altogether a high art affair. His Honor is here represented in the character of Meliboeus—al. together an engraved bucolic. It was doubtless taken just after a return from the country. By mixing this likeness carefully with the other and removing a hang-dos expression which we detect in both, we get at something like the imposing front of our worthy and efficient Mayor. Considerable genius is displayed on the remainder of the group. The distinguishing feature of the Board here, is that of smelling something; with the exception of Ald. Bross, who appears not only to smell it, but to see it—very distinctly. But we need not particularize. The Chicago Magazine is for sale at Burke’s and McNally’s—price 25 cents. 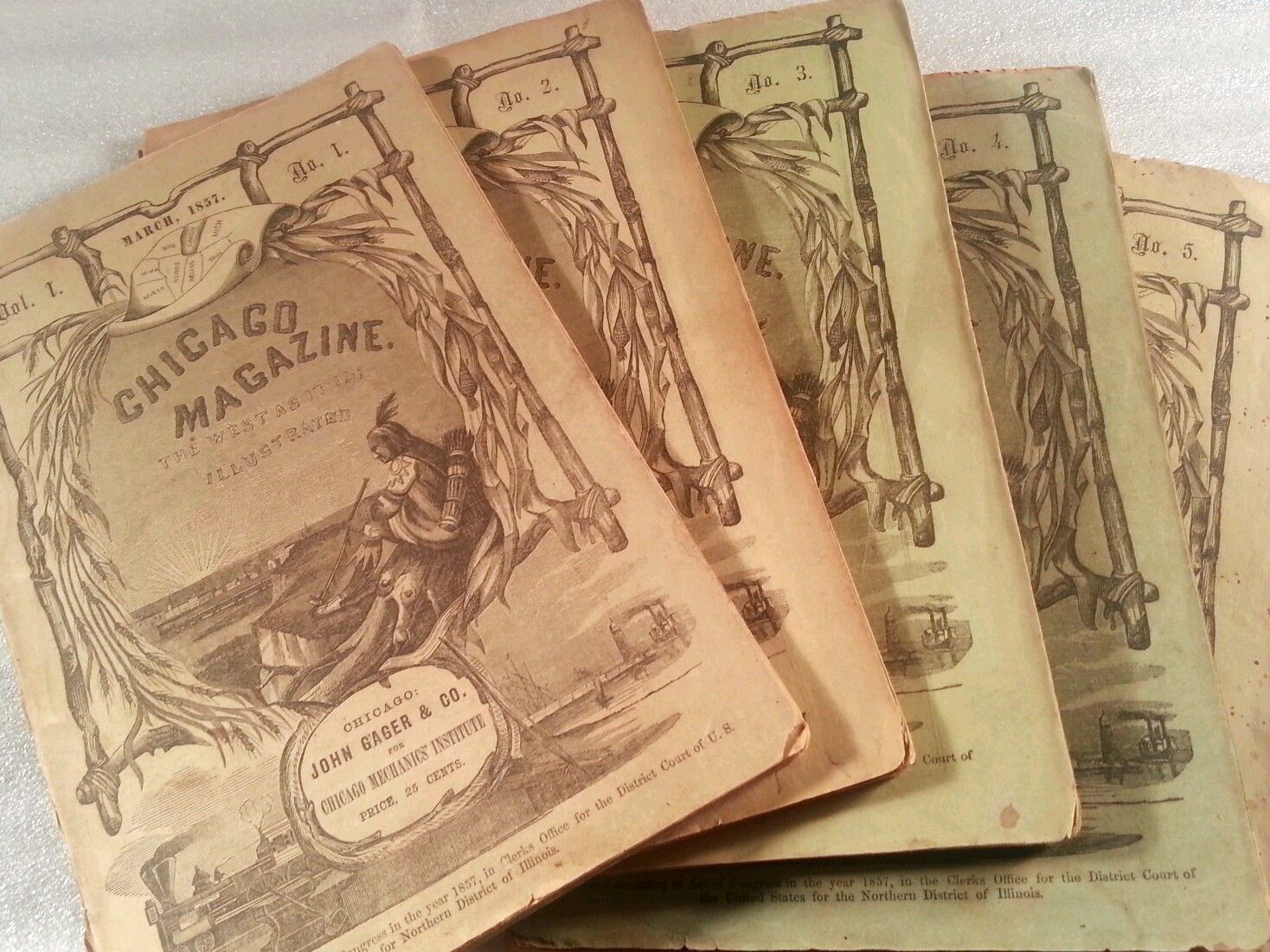 The complete run of The Chicago Magazine