IN the days before railroads were built in this western country, there were stage coach lines traversing this region in every direction from Chicago. In 1834, the Frink and Walker lines carried on an extensive business transporting passengers to and from many important points over routes now used by the railroads. The Chicago office of the Frink and Walker lines was at the southwest corner of Lake and Dearborn streets near which were also their extensive barns. The roads through the country were but slightly improved; in fact, they were scarcely more than tracks across open prairie land. Streams were forded and ferries used at rivers too deep for driving through.

The stage coaches were built with three seats inside, each holding three passengers, and besides these there were the usual outside seats for driver and roof passengers. They were hauled by four-horse teams, which in dry weather made a fair rate of speed, and about every thirty miles the horses were changed. The journey continued throughout the night, as well as by day, until the destination was reached.

When by reason of wet weather, or where the roads ran through lowlying country, the going was difficult, the stages were frequently mired and the passengers were then obliged to assist by prying out the stage with rails or poles left after use by previous travelers, or to walk long distances up hill carrying stones or heavy sticks of wood to block the wheels when the driver considered it time to give the horses a chance to rest.

A journey by stage was a very fatiguing experience even in favorable circumstances, and when they finally arrived, the passengers were exhausted and worn out. Settlers coming into the country used heavy wagons called “prairie schooners” drawn by oxen, and farmers coming to market were often several days in transit. They would camp out at night and sleep under the wagon. 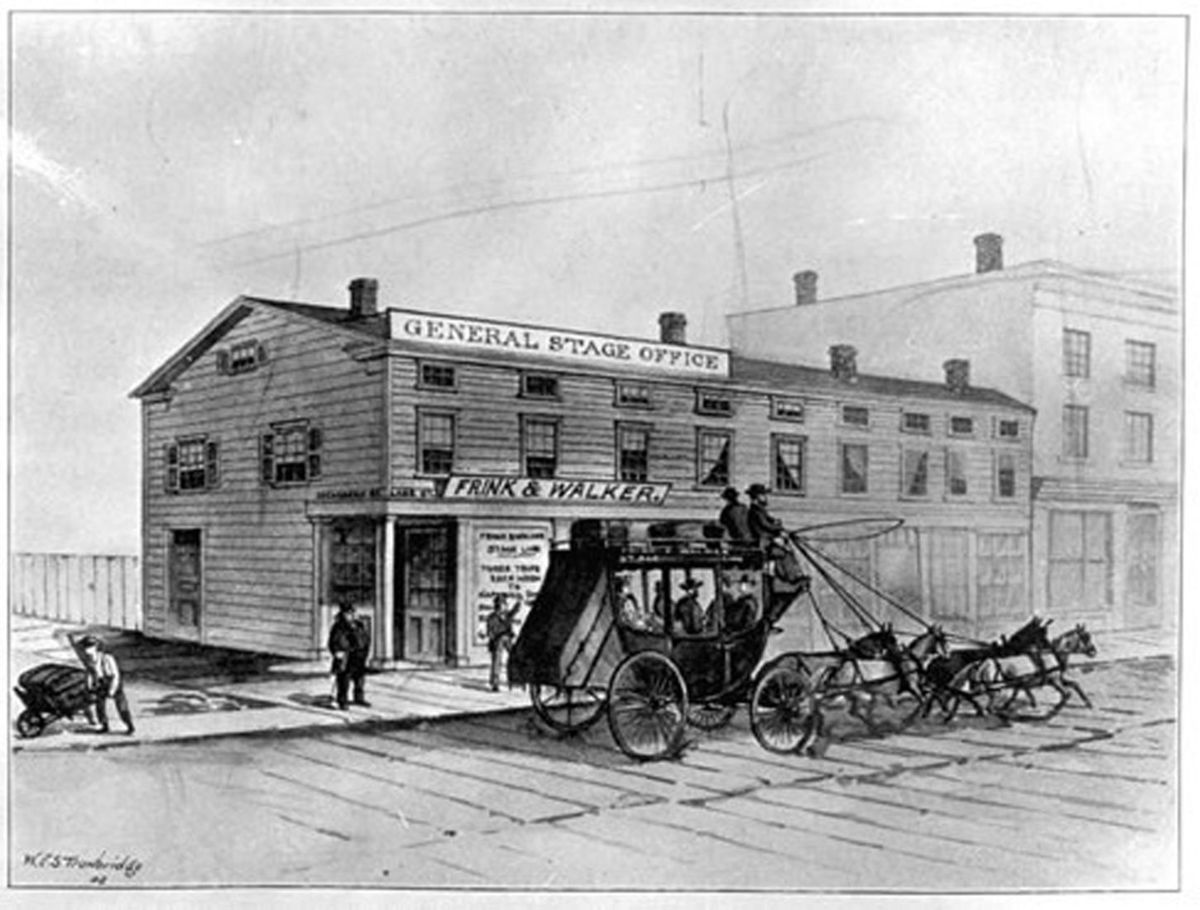 Chicago was a thriving market town, and here the farmers could readily dispose of their produce and purchase supplies. South Water and Lake streets were the principal business streets, but in those days the streets of Chicago were no better than the roads over the prairies, and there was much difiiculty in getting through them and hauling the loads to the numerous commission houses scattered about the place.

In 1837, the year in which it was incorporated as a city, the population of Chicago was 4,179, but it was growing fast and was preparing for a greater development both in business and numbers. In 1848, the first boat on the Illinois and Michigan canal arrived, and this event decided the future greatness of the city. The canal boats brought in grain and returned laden with lumber and milled products. Passenger boats on the canal successfully competed with the stage lines for a large share of through traffic. The canal connected Chicago with the head of river navigation at Peru, near La Salle, and thus brought Chicago in direct line with the Mississippi and its vast river system.

The railroads were rapidly extending their lines from the east, and in the early fifties connection with eastern lines was established and followed soon afterwards by western extensions. There was room for all transportation lines, however, and the country was booming with prosperity, in spite of the serious set back resulting from the efi‘ects of the disastrous panic of 1837. The steamboat lines between Chicago and Buffalo increased their business both in transporting passengers as well as freight during these years, and even sailing craft were in such demand that the harbor was thronged with shipping and the lake was white with their sails.

But the want of good roads spelled the doom of the stage—carrying traffic, though desperate efforts to improve them by planking and building “corduroys” kept them alive for a time. In 1844, Walter Brown came from the east in search of a new field of business. He was the father of one our prominent citizens of a later day, Edwin Lee Brown, and he had decided that he would sell out a flourishing business in Maine and establish himself in this new and golden west. He traveled by stage between here and Peru, about a hundred miles, and kept a diary in which he noted some of his adventures and, quite candidly, many unfavorable features of the country and its people especially apparent to his keen vision.

In his diary Mr. Brown relates that he went from Chicago to Peru, a distance, he says, of 110 miles, where he arrived very much fatigued after riding one day, one night and until three o’clock the next after noon. The roads were desperately bad. “The sloughs and the mud-holes were so bad,” he wrote, “we had to get out and walk about twenty times.”

Still in spite of these drawbacks travel rapidly increased, and, “in 1838, from six to ten coaches daily each way were required to carry the passengers.” The streets of Chicago as described by Mr. Brown, “are generally rounded up by plowing and making ditches on each side of the street, and though there is much standing water the place is much more healthy than anyone would suppose, as it lies upon the lake and often the breeze from the lake is refreshing and keeps the air pure.”

Long before there were railroads, motorcars and airplanes, the stagecoach was Chicago’s principal link with much of the world.

The mail in the 1830s and ’40s traveled on Frink & Walker coaches that rattled and bounced over Potawatomi trails to Detroit, Peoria and Galena at an average of less than 10 m.p.h., dodging tree stumps and fording streams.

The competition for passengers was so intense that fare wars broke out and stagecoach operators ordered drivers to beat the opposition to their destination at all costs.

“I find horses. I want you to find whips,” John Frink is supposed to have bellowed at one driver who said he lost the race to a rival coach because he didn’t want to kill the horses.

Now largely forgotten, Frink was Chicago’s stagecoach king for almost two decades before the railroads arrived. Though his Frink, Walker & Co. never attained the fame of the Butterfield Overland or Wells Fargo transcontinental stage lines, he presided over an empire that included 2,000 to 3,000 miles of routes in the Midwest.

When Frink ruled the Midwest, Henry Wells and William G. Fargo were still freight forwarders doing business as Western Express and shipping cargo between New York and Midwestern cities by whatever means was expedient. That presumably included Frink & Walker stages, as they were popularly known. John Butterfield was a main competitor.

By the 1840s, Frink was one of the Midwest’s biggest stagecoach operators primarily because he was a master at bidding on and lobbying for the government’s mail business. In one year alone, Frink and his partner, M.O. Walker, received $150,000 in such contracts.

The lakeshore village Frink found in 1836, when he came to Chicago from New York, was closer to a Wild West town than a metropolis.

Except for a few hearty souls who drove wagons or walked, most Chicagoans’ link to civilization was primarily by schooner to and from New York via the Great Lakes and the Erie Canal.

In those days, the two principal cities of the Midwest were the river towns of Cincinnati and St. Louis, which had good steamboat service. The closest a river steamboat could get to Chicago was Ottawa, more than 90 miles down the Illinois River.

Chicago’s first stagecoach line arrived from Detroit in 1833 after the Blackhawk War of 1932 ended an Indian revolt over ownership of Illinois farmland and made land travel safe west of Chicago. A year later, Dr. John T. Temple started a stage line from Chicago southwest to Peoria to meet the steamboats plodding up and down the Illinois River from St. Louis. (The 96-mile Illinois and Michigan Canal that would eventually connect Chicago with the Illinois River at Ottawa was not completed until 1848.)

Frink, a Connecticut native who learned the stagecoach business in the East, first formed a rival stage-steamboat line, then in 1837 bought out Temple.

Two years later, Frink started a route to Galena. The 150- to 160-mile trip, depending on the route, took the better part of five days, and the fare was $12.50. A few years later, the 97-mile trip from Chicago to Milwaukee by stage consumed two days, with an overnight stop in Kenosha, but competition from Great Lakes ships had reduced the summertime fare to $3.

Traveling by stagecoach in the 1840s had none of the romance portrayed in countless Hollywood movies. Travelers to and from Chicago suffered hot, dusty rides in summer. In spring and fall, passengers often were forced to help push the coaches out of the mud or help with repairs. In winter, the frozen ruts made travel in the unheated coaches bone-jarring. Stage lines from the East were known to use Lake Michigan beaches wherever possible for a smoother ride.

The stages typically left the Frink & Walker depot at Lake and Dearborn Streets between 4 and 6 a.m. to take advantage of as much daylight as possible. They often stopped for the night at inns.The Chicago-Galena run originally took five days when stages operated by daylight only, but that was cut to two days when they ran around the clock, with stops every 12 to 15 miles at relay stations to change horses.

Forty-five to 50 miles was an exceptional day of travel. Most coaches in daylight service didn’t do much better than 30 miles.

Even meals could be an ordeal. The inns usually didn’t start cooking until the coach arrived. That took about 50 minutes, so the passengers had to wolf down lunch or dinner in just 10 minutes to avoid being left behind after the hour layover.

Accidents were common, as were injured horses that often immobilized the stages and forced passengers to continue their trips on the first farm wagon that came along.

The vehicle we now call a stagecoach was known in the 1830s as the Concord Coach, originally designed and built in 1827 in Concord, Mass., by Lewis Dowling. It had an oval-shaped passenger compartment with a flat roof and bench seats for six people adapted to withstand the terrible roads.