VAST playground is the forest preserve district of Cook county, which provides more than 51 square miles of natural woodland for the pleasure of the people of Chicago and surrounding territory. With its 33,000 acres, lhis great recreational preserve is larger in area than any similar series of tracts in any metropolitan district in the whole United states.

That Chicagoans, people from the suburbs and thereabouts, and visitors from near and far enjoy the undoctored beauty of the forest preserves’ woods and streams is proved by the fact that annually more than 15,000,000 persons visit lhe areas under the jurisdiction of the district. The 15,000,000, of course, include innumerable repeat visits by those who delight most in the attractions of the preserves.

It was in the early years of the present century that farseeing citizens of Cook county came to realize the necessity of establishing natural recreational areas for the benefit of the rapidly increasing population of Chicago and its suburbs. An escape from the congestion of the great city was essential to the well-being of the population. In 1915 the largest area of its kind in the country was set aside “to protect and preserve the flora, fauna. and scenic beauties and to restore, restock, protect and preserve the natural conditions, for the purpose of the education, pleasure, and recreation of the public.” Today that area has grown into one of 33,000 acres, bordering the Des Plaines river, the north branches of the Chicago river, the Skokie marsh, Salt creek, Thorn creek, and various other inland streams and waterways.

Since 1929 a program of improvcment has been put into effect to care for large crowds adequately without injury to the landscape. The forest preserves now present a spectacle of beauty and service for the millions who visit them each year. These visitors utilize the preserves for all imaginable forms of outdoor recreation, including horse back riding, hiking, baseball. swimming, golf, skiing, tobogganing, nature study, and scores of other sports and pastimes. Most important, perhaps, of all the uses to which the great playgrounds are put is picnIcking. Special provisions have been made in all the different tracts of the preserves to make picnicking easy and without discomforts. 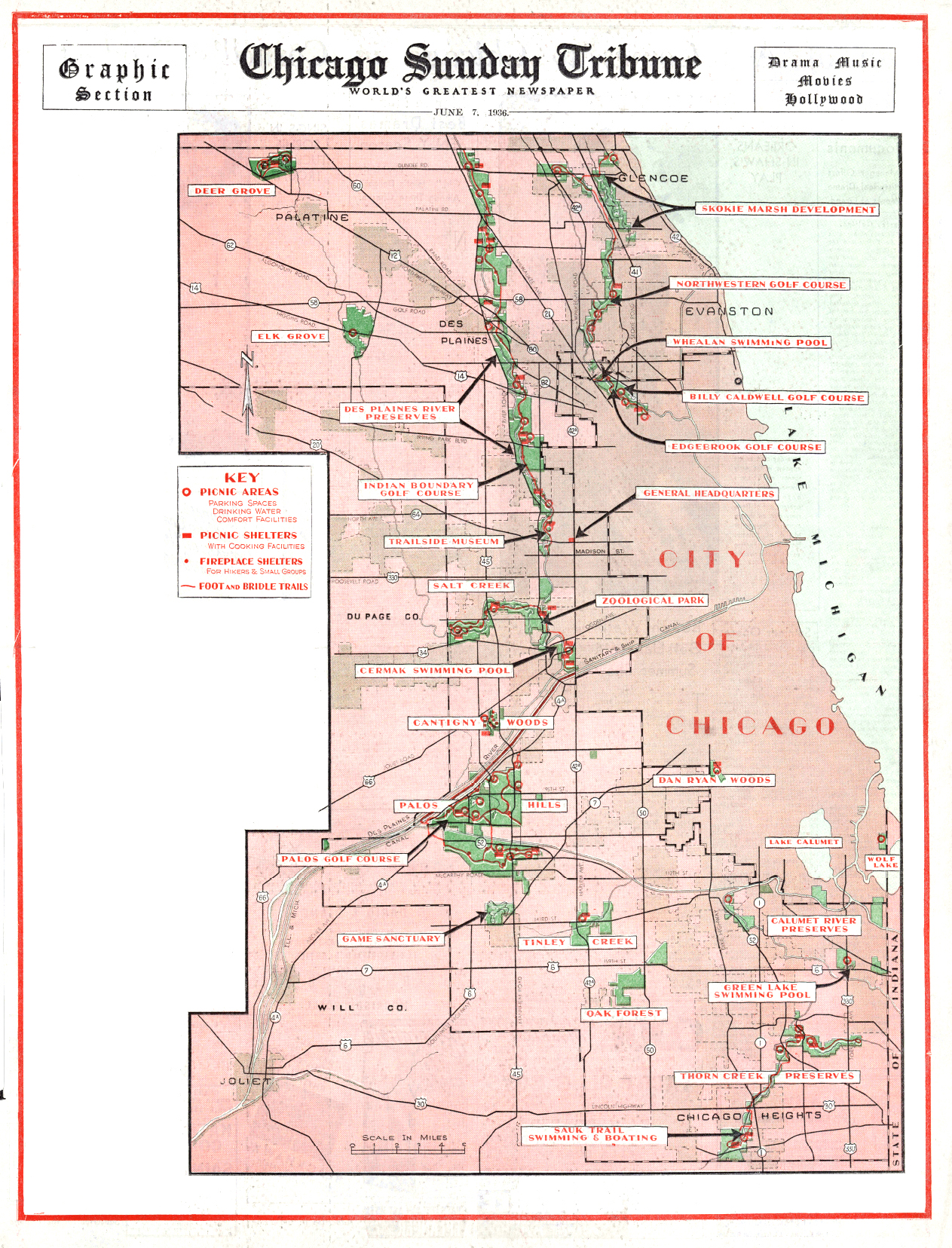 This map showing location and erient of the forest preserves of Cook county, is reproduced. with slight alterations, from a map prepared expressly for The Chicago Sunday Tribune by John Barstow Morrill and drawn by Victor Seastrand

Thirty-one shelters, each with one fireplace or more, have been erected in the principal picnic areas. Thirty-six trailside fireplace shelters along the vanous hiking paths accommodate picnickers who wander from their automobiles. The forest preserve district provides trail maps for those who enjoy hiking through the woods.

There are five golf courses in the preserves, three modern swimming pools, and more than 150 miles of trails. Automobiles are restricted to certain entrance roads and inclosed parking spaces near the borders of the variol1s woodland areas. The idea, of course, is to preserve the natural beauty of the tracts and to get the people out of their automobiles and into the depths of the woods. Wherever necessary the beauty of the woods is being preserved through reforestation.

Not the least of the attractions of the preserves arc the wild flowers that bloom so profusely within them in the springtime and the song birds that nest in their leafy branches or make of them stopping places during spring and autumn migrations.

The forest preserves are divided roughly into more than forty different tracts.