This article appeared in the October, 1929 issue of Radio Digest.

On Air Everywhere
World’s Greatest Singers Come to You Free from Advertising Through NBC
By A. R. Williamson

Scarcely ten years ago, when the Radio infant was first beginning to try out its lungs and little groups of amateur enthusiasts were gathering every evening to “see what they could get,” grand opera was broadcast for the first time. It was not much of an event in the history of music, for the sounds which came into the ears of listeners, mingled with “static” and other interference and marred by the inadequacy of the equipment, could hardly be called music. But it was, nevertheless, an event, for it was a forecast of the great things which the rapid advance of Radio science and the eager response of the American public to broadcast programs would some day make possible. 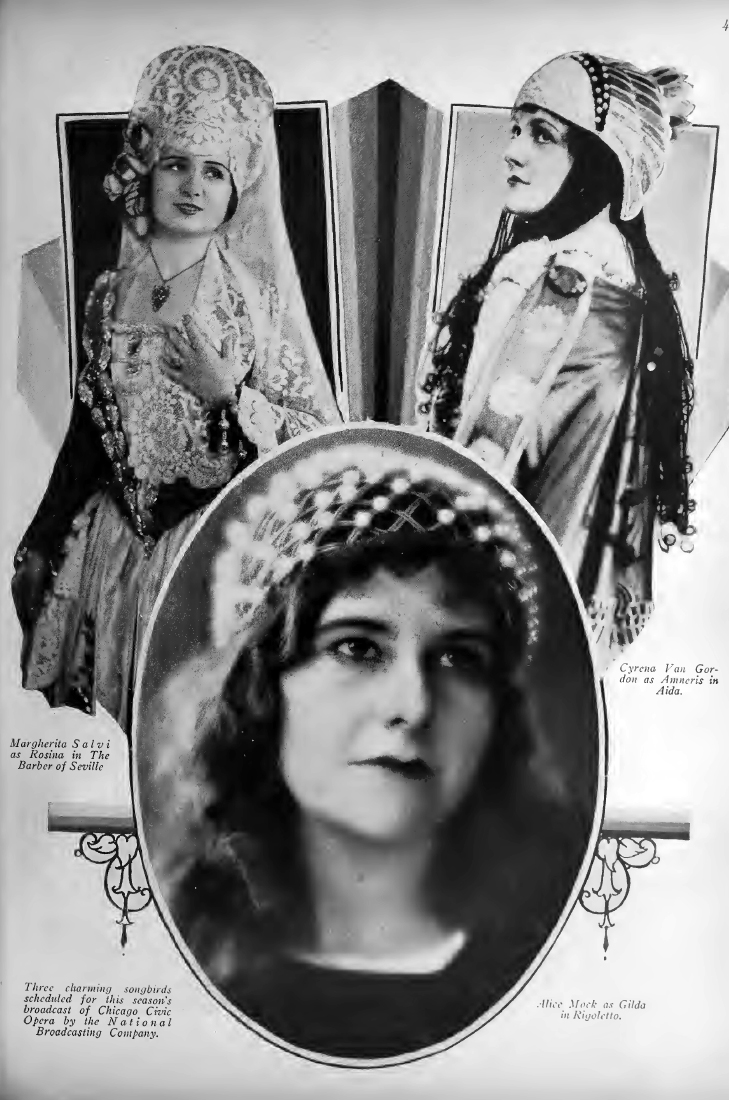 Three charming songbirds scheduled for this season’s broadcast of Chicago Civic Opera by the National Broadcasting Company.
From Left to Right, Margherita Salvi as Rosina in The Barber of Seville, Cyrena Van Gordon as Amneris in Aida and (Center) Alice Mock as Gilda in Rigoletto 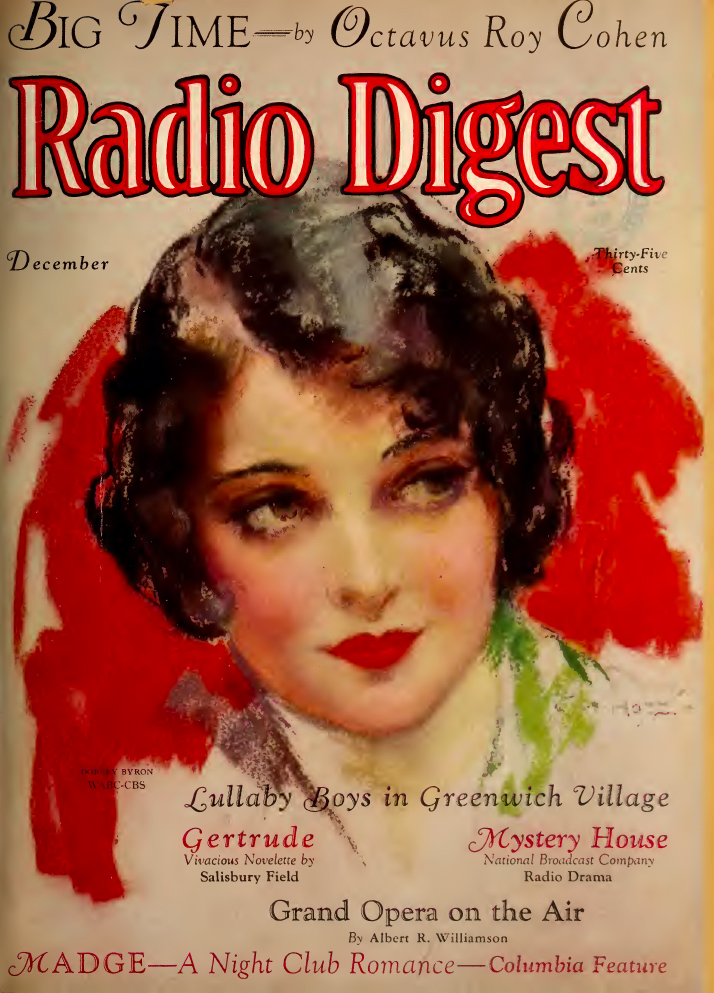 In the light of present day knowledge, it seems strange that early operatic broadcasting should have so thoroughly ensnared the public fancy as it did in those early days. Broadcasting operas was at that time, and still is, one of the most difficult feats accomplished by Radio engineers, and in the first attempts, the broadcasters made what would seem to us now “a sorry mess” of it. It is comparatively simple to send out a good reproduction of the voice of a single singer, who sings with his mouth close to the microphone, or a group of artists, performing within the confines of a small studio,; where acoustic properties and other details are especially, engineered for broadcasting. But it is a different matter to broadcast a performance which takes place on a large stage, upon which the actors-move freely back and forth, in a theatre designed to hold and seat spectators rather than for the sole purpose of broadcasting. But in spite of these handicaps, which the nature of the performance makes unavoidable, operatic broadcasting has remained one of the most popular aspects of Radio entertainment. There is something wonderfulto the average listener in knowing that he is hearing the finest the musical world can produce—arias sung by the world’s greatest artists, orchestras composed of the finest musicians and conducted by internationally known conductors^all within the walls of his own home. As methods and means improved during the years, the practice of broadcasting operas over the air has become more and more popular, until now, when the operatic scores can be heard with the same distinctness and delicacy of tone through the loud-speaker as in the theatre itself, America’s opera-going, or, more properly, “opera-listening” audience numbers in the millions.

With the beginning of the Chicago Civic Opera season this year, millions of families all over the West tuned in on their Radios for the broadcast of the programs. This year the performances will make musical history. Gathering artists from all over the world, noted singers, dancers, musicians, composers and critics for the dedication of its new twenty million- dollar opera house, the Chicago Civic Opera company has done everything that money and talent can do to make the season one of the most colorful and brilliant in the operatic world. And not only the theatre audience, but the Radio audience as well, will expect great things.

In order to meet this expectation, every improvement of modern Radio science has been called into use by the National Broadcasting company in its series of opera broadcasts which are carried over a wide network of stations throughout the heart of America. In the old opera house, Radio was regarded somewhat as a noisy boy who made lots of trouble but had very little importance. Although facilities were the best which could be provided under the circumstances, they were of a hit and miss nature, and those in charge of operations had to work under great difficulties. The designers of the new building, however, realized the true importance of the Radio audience in making their plans, and scientific installation of the microphones and control boards in the new building has been treated as a necessity rather than a somewhat superfluous added feature.

Fourteen performances of the Chicago Civic Opera will be broadcast during the season. Every Saturday night from nine to ten, Central standard time, is Chicago Civic Opera hour. Among the artists not heard last year who will sing this season during broadcasts are Claudia Muzio, who returns to the company after an absence of one year; Hallie Stiles, from the Opera Comique of Paris, a newcomer to the Civic Opera forces, and a tenor new to America, Theodore Strack, who is heard in the German repertoire; and Thelma Votipka, American soprano.

Surrounding the stage from every quarter is a group of microphones, designed and placed to pick up the music and send it out over the air in exactly the same way that the ears of the audience pick up the music from the stage. Microphones are installed in the footlights, in the wings, back-stage and in the orchestra pits. Far up in the last balcony, occupying much the same position as the projection room in a motion picture house, are the two sound-proof, glass-windowed control booths, where the monitor boards are installed. Under the stage is a power control room, where the power sent to each microphone may be controlled as desired.

And in the control booth are the two men upon whom the success of the broadcasting will depend, possibly even more than upon the efforts of the artists on the staged, Sitting at the monitor board, where the control of the microphones on and about the stage is handled, is C. C. Gray, NBC staff engineer, who has performed this duty for several seasons, and at his elbow Don Bernard, program manager; of the Chicago studios. It is Mr. Bernard’s task to supervise the handling qf the controls in much the same way the conductor’ of the orchestra directs the work of the musicians. He has the score of the opera in his hands, which conforms exactly with the score being used by the musicians. Following the music carefully as it is played, it is necessary for him to instruct Mr. Gray during the whole course of the entertainment. If there is to be a loud crash of brass in the opera, Mr. Bernard will foresee it by reading his score in advance, and the proper modifications will be made by the engineers to preserve the full beauty of the passage as it is heard from the stage. Further adjustments will have to be made -every time a singer changes his position on the stage, and there are a thousand and one changes to be made and emergencies to be met during the program, which only careful preparation and constant vigilance can make possible.

Included in this Uooth is the announcer, Thomas Breen, Jr.. who gives out the necessary information to the Radio world. The advantage of the new equipment in the opera house is at once apparent, when it is realized that this booth gives a full view of the stage, instead of being in the basement as it was in the old opera house. In this way, those in charge of the broadcast are not only able to see all that happens and able to reproduce it with more exactness, but get much more of the “feel” of the production.

Another element with which the broadcasters have to contend is that of time. The Chicago Civic Opera this year is broadcast for one hour only, which means that everywhere one turns in the control booths he will see stop-watches, electric clocks, and other time-keeping devices. The broadcast must begin exactly on the scheduled time and end an hour later, regardless of the time schedule of the opera. There are times, for instance, when the Radio broadcast must end right in the middle of an inspiring aria, and in order to prevent a “chopped off” effect in closing the program, the microphones must be “faded out” in a manner which requires all the skill and delicacy of touch of a concert pianist.

Unlike many attractions of a similar nature, this year’s broadcast of the opera is not a commercially sponsored program. It comes as free as the air over which it is sent into the homes of America’s millions, bringing them a touch of art and beauty which, without the magic of the Radio, they would never know. Until the last few years, grand opera has affected the lives of only a small per cent of the country’s more cultured classes; now the Radio makes it the heritage of the millions.