The discovery last night of the automobile believed to have been used in the Moran gang massacre produced clews, names, identifications, and arrests and the belief the right trail has been found—as the eyeglasses led to the exposure of Leopold and Loeb. The car was found burning in a garage at the rear of 1723 North Wood Street. It had been cut apart with saw, ax, and acetylene torch.

The hurried effort to destroy the car lest it be found as the result of an order to search all garages for liquor violations put the police in possession of what they consider the first real evidence against the men who constituted the firing squad that executed seven members of Bugs Moran’s north side gang.

A hat and coat left behind as the car was set on fire led the police to believe that one of the men engaged in dismantling it may have been seriously burned. 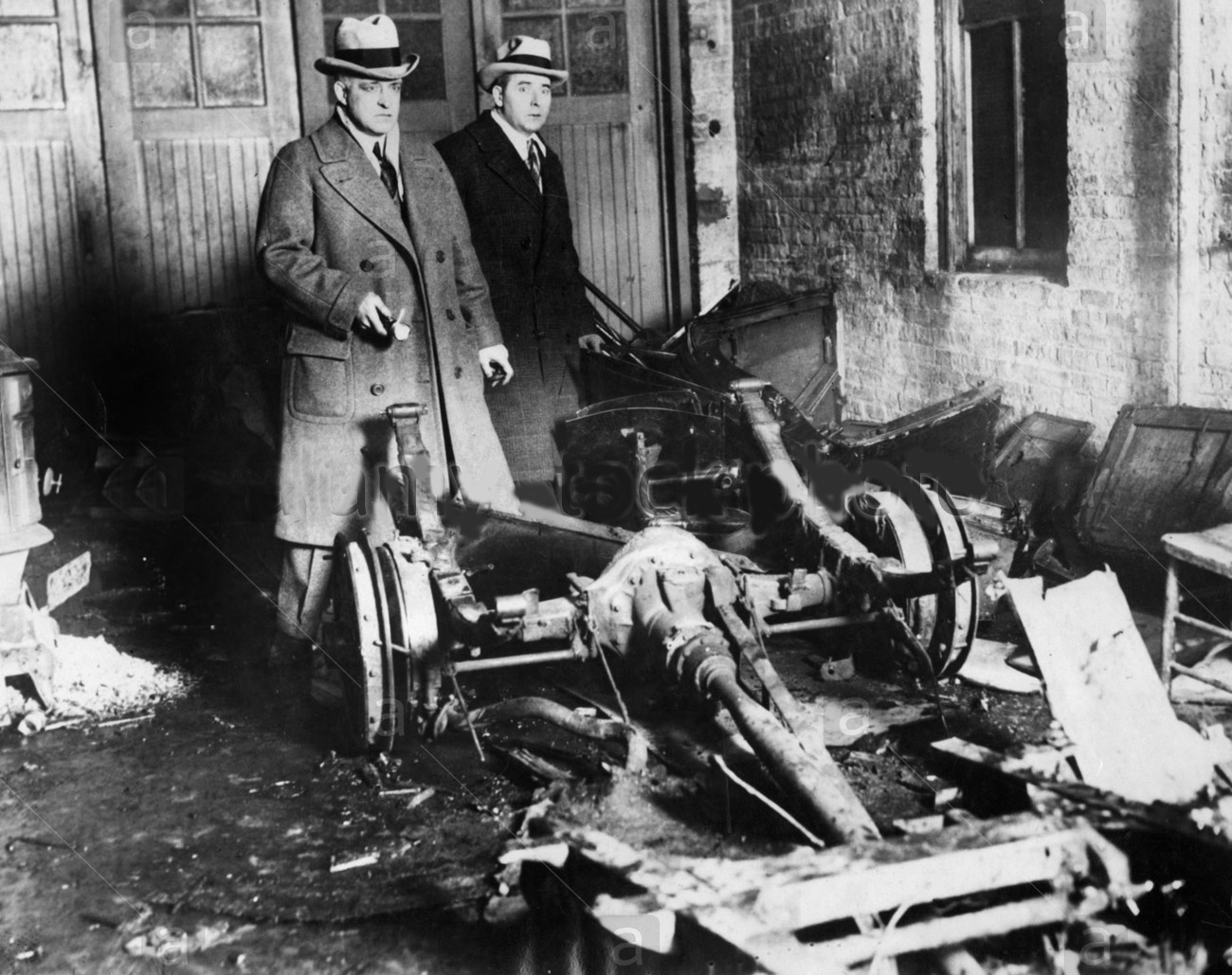 Photo of Renter Identified.
The owner of the garage viewed pictures of criminals at the detective bureau early this morning and put his finger on one as that of the man who rented it, apparently as an immediate haven after the crime and as a place to dispose of police uniforms and to take apart the automoble witnesses had thought was a detective bureau squad car.

Witnesses were found who had seen and are able to identify men who used that garage. Numbers on tires and in hidden places on the automobile were expected to be traced to a purchaser.

The address given by the renter sent police to a place known as a machine gunners’ nest. It gave them names of known gangsters who frequented it and it furnished them with connecting links which they believe will lead to a successful finish of investigation.

A Lueger pistol and the wooden grips of another pistol were left behind as the fire directed against the automobile got out of control. These had been handled by so many persons after the fire they were worthless for fingerprints.

The automobile had been sawed and hacked before it was set afire. The top of it had been burned piecemeal with an acetylene torch. The rear wheels were gone. The cylinders had been taken from the motor. A siren which had been on the car was found in a corner of the garage.

It was obvious that it was being wrecjed do as to make it forever unidentifiable. It was a Cadillac touring car, 1927 model, such as was seen stopping at the 2122 North Clark street garage on Feb. 14 when its occupants went inside on their mission of death.

Cleanup Order Spurs Wreckers.
Deputy Police Commissioner John P. Stege said he was convinced the men doing a little bit each day toward disposing of the car so it would appear as a mute witness against them. Then when Commissioner Russell’s order was published yesterday afternoon, directing a searching of garages, the men apparently realized they had better hurry their work of destruction.

“They were burning all the wood, canvas, and upholstered parts slowly,” Stege said. “Last night they probably used a little gasoline to speed up their work. The coat and hat left behind indicate one of them git too near the fire and perhaps too much gasoline was spilled on the blaze.”

The hat bore the name of the dealer, Frank G. Krause, and it was thought his place was at 1431 Milwaukee avenue. The hat was gray, a 7¾ size, and had cost $7.

Battalion Chief James Conway, summoned when smoke and flame was seen coming from the garage, which was barricaded with crowbars, notified the police of the car’s presence in the place. When Deputy Commissioner James L. Mooney saw the machine he sent this message to headquarters:

The murder car has been found.

The discovery of the wrecked automobile was regarded as a great stride toward solution of the massacre mystery, but investigators were still working on the cleaners’ and dyers’ feud, booze running and Detroit angles of the crime.

Regardless of which theories were strengthened or weakened by the discovery, the discovery meant names, and the names that followed were in the nature of a revelation, it was said.

Rented Two Days Before Killings.
The garage was rented on Feb. 12—two days before the massacre. The man who rented it gave the name of Frank Rogers and the address of 1859 West North avenue. Leo Joppet, 1808 Wabansia avenue, owner of the garage as well as of the building in front, said he knew nothing about Rogers except that he said he wanted the use of the garage for a month and that he paid $20 in advance.

No one was in the garage when the firemen arrived. John Wisniefski who lives in the front, said he didn’t know who was using the garage or who had turned in the alarm, but smoke was coming from it and part of the woodwork was found smouldering.

Certain of a discovery of great value to the investigation of the Moran massacre, the detectives hurried to 1859 West North avenue.

The place was deserted. Next door was a café, the Circus. Across the street was the house formerly owned and occupied by Pasqualino Lolordo, whose murder followed his assumption of Sicilian leadership after the slaying of his chief, Tony Lombardo, who was shot to death last fall at Dearborn and Madison streets.

Police Recognize Place.
“What do we know about this place?” said members of Lieut. Phillip Carroll’s squad, the first to arrive from the detective bureau. The answer came swiftly.

“Claude Maddox,” said one, and the records disclosed the following:

On Jan. 26 Lieut. Klatzko and his supervising squad were making raids and they visited 1859 West North avenue. They found Claude Maddox there and he gave the name of John E. Moore, 1643 Warren avenue. He was hiding in a rear room of the first floor which was devoid of furniture.

In the apartment they found the drum of a machine gun loaded with 100 rounds of ammunition. A dozen overcoats were hung about in various places. In a pocket of one of them was a loaded automatic pistol.

Maddox Shot in Union Feud.
No prosecution was maintained against Maddox, but his record disclosed that he had been arrested in 1924 when found riding in an automobile belonging to local 705 of the Truck Drivers Chauffeurs and Helpers Union. The license had been in the name of Joseph Franks, an aid of Michael Gavin, head of the joint council of all teamsters and chauffeurs’ locals.

A week later Maddox was shot in the back while in the company of Anthony (Red) Kissane and John Mackey. Mackey was killed by the same volley that wounded Maddox. The shooting was inscribed to differences within the teamsters’ unions and was said to have had something to do with union support of candidates for political office.

Maddox was also known as companion of Jack McGurn, former prize fighter and notorious as a gunman, and of David “Jew” Bates, another who is said to heave been on both ends of gun fire many times. Two recent attempts on McGurn’s life were said to have been the work of the Gusenberg brothers—both if whim were killed last week—Frank Foster and others of the Moran gang.

$50,000 Reward in Sight.
Rewards of $50,000 were in sight yesterday for solution of the gang massacre as Ald. Oscar F. Nelson (40th) issued a statement in refutation of the theory that the victims had been killed as a result of their seeking control of a union. Another development of the day was a new order from Police Commissioner Russell intended to make Chicago a drinkless city.

At a meeting in the commissioner’s office, Ald. Berthold A. Cronson (4th) agreed to sponsor a resolution in the city council directing the city to offer $20,000 for information that would bring about the arrest and conviction of the murders. Corporation Counsel Samuel A. Ettelson and Ald. A. K. Mose (50th) were in accord with the plan. It was also announced that public spirited citizens had a greed to contribute $10,000 towards the reward and that State’s Attorney John A. Swanson had been authorized to post $20,000 as a reward from the county. In addition there was a report that the authorities will ask the Association of Commerce to raise $50,000 more, which would make the total reward $100,000.

Dyer War Theory Still Holds.
There was no abatement of the theory that the deaths of the two Gusenberg brothers, James Clark, John May, Albert Weinshank, Adam Heyer, and Dr. Reinhardt Schwimmer was probably due to the Moran gang’s efforts to climb uo the ladder from the foothold they gained in the cleaning and dyeing business. This theory included the belief that the massacre was an aftermath of the murder of John G. Clay, secretary-treasurer of the Laundry and Dye House Chauffeur union.

But Ald. Nelson called attention to a statement published yesterday morning to the effect that Willie Marks and James Clark had succeeded in becoming vice presidents of the union. That statement was false, he said, and from the prosecutor’s staff came an explanation that Marks and Clark had been close to official positions.

Ald. Nelson was not summoned to the prosecutor’s office but he communicated with Mr. Swanson’s secretary. Afterward, he made the statement that he had never been threatened by George (Bugs) Moran or any of the Moran gang while he held the interim office of secretary-treasurer of the union from the day of Clay’s death in the election of his successor.

Orders Raids on Garages.
Commissioner Russell, aside from directing the Moran gang murder investigation, was seeing to the observance of the order of State’s Attorney Swanson that prohibition must be enforced in Chicago. The commissioner’s latest order was directed against all garages, sheds and buildings on alleys, which are to be searched with or without search warrants. Already the semi-public places hitherto known as saloons, speakeasies, and soft drink parlors are closed. Commissioner Russell was informed by his deputies, and he warned against their being allowed to open again. His new order read:

District commanders will at once have a search made of all garages, both public and private, barns, sheds, in fact any type of building on alleys, for the purpose of ascertaining and reporting any places suspected of having miniature breweries, whiskey stills, alcohol stills, whiskey or beer trucks, liquors or beer stored.

A TALE OF TWO CARS.

The explosion took police to First avenue and Harvard street, Maywood, about 1:10 o’clock yesterday morning. They found a partly demolished Peerless touring car with police gong, gun rack and the license plates numbered 787-950. A pair of overalls, a cap, two empty shotgun shells and a notebook in the car. The book contained the name of Albert Weinshank, one of the seven massacre victims, and names and notifications concerning the cleaning and dyeing business and whiskey sales by case lots.

The explosion of dynamite or black powder, was judged to have been premature. The license plates on the car had been stolen from George Gilliam of Argo two months ago, and apparently used because all detective bureau machines are numbered in the 787,000 classification.

The effort to destroy the car, or partly destroy it, the police said, looked like a clumsy attempt to confuse the investigators. 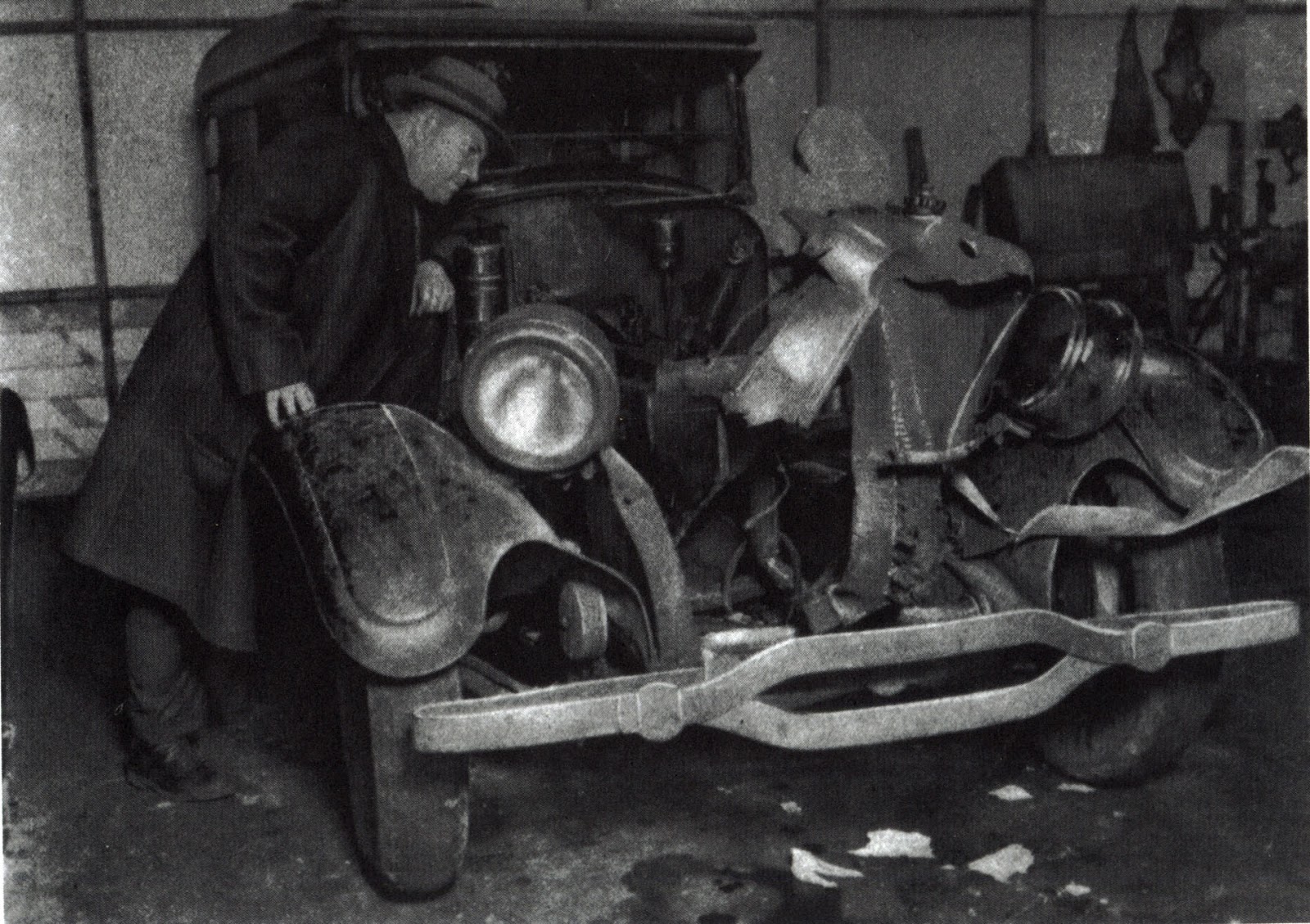 The 1926 Peerless (above) found in Maywood was to have been used to bring the phony policemen to the warehouse, and after the shooting, they made their getaway in the 1927 Cadillac. There was no connection of this car with the massacre until the confession of Byron Bolton in January, 1935. Until then, the police knew that the 1927 Cadillac found a week after the massacre was definitely used. They just didn’t know there were two cars involved. 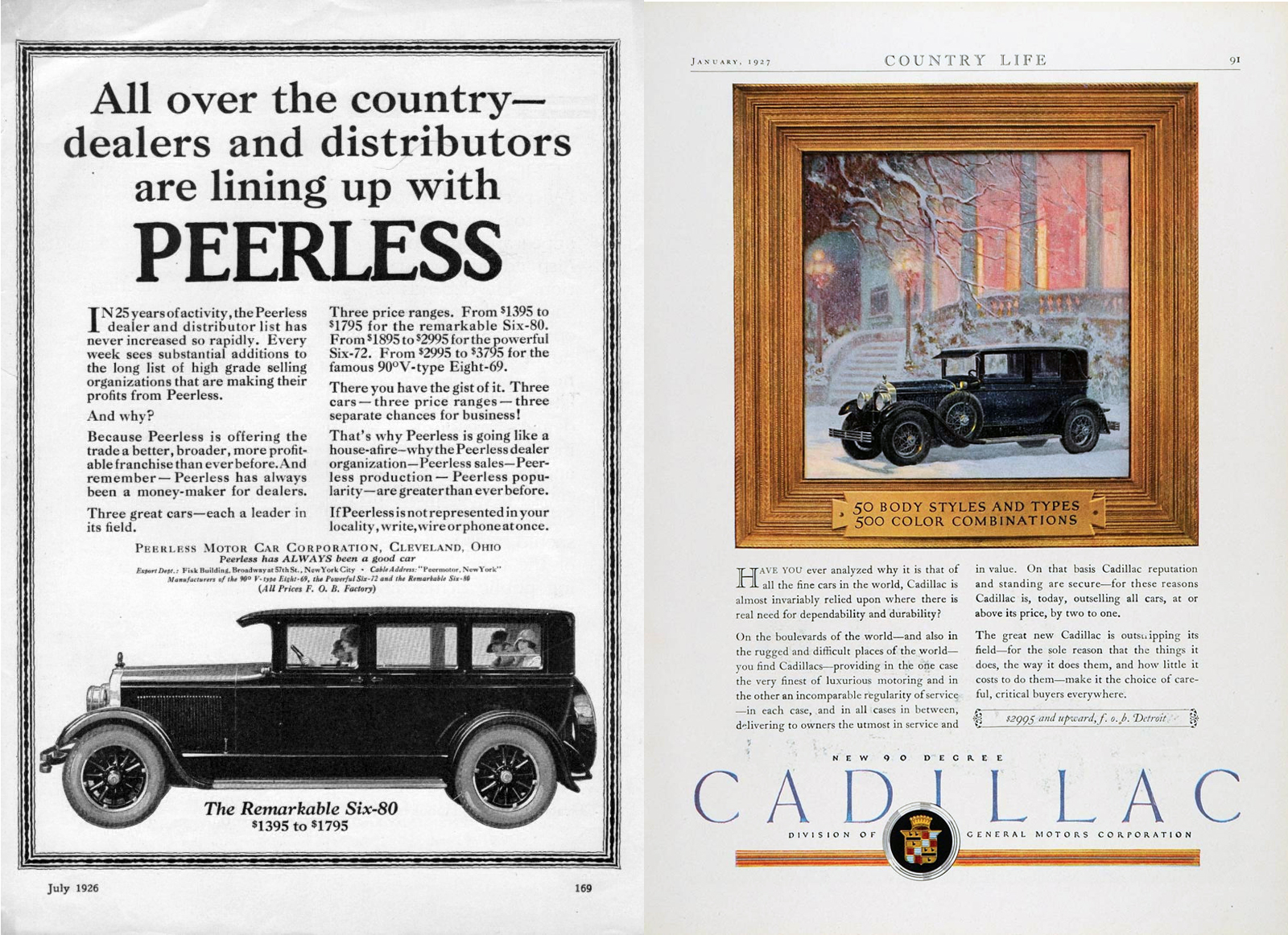