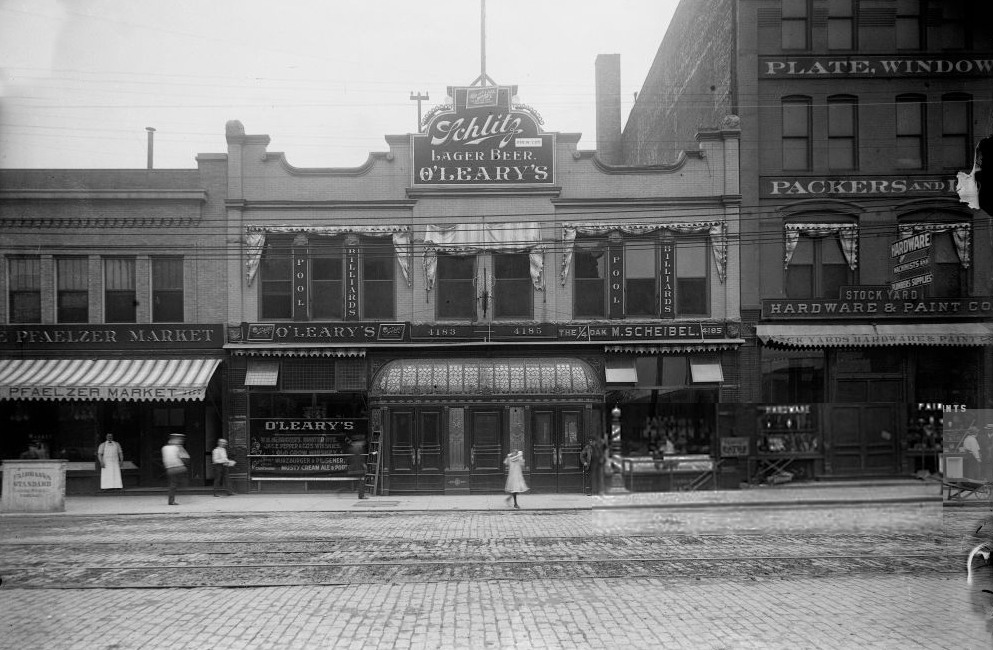 James O’Leary was born at 137 DeKoven Street, the house in which his parents lived and which would see the start of the Chicago Fire two years later. He had a sister, who married James Ledwell.

O’Leary began working for local bookies as a teenager eventually opening Long Beach, Indiana, an off-track betting resort, however it soon closed due to bankruptcy by the 1880s. As a young man, O’Leary worked at the Union Stock Yards, where he acquired the nickname “Big Jim.” His big break was when he decided to bet heavily on the 1892 Fight of the Century between John Corbett and John L. Sullivan. Sullivan was heavily favored as much as 4:1, but O’Leary put his money on Corbett. Corbett won. 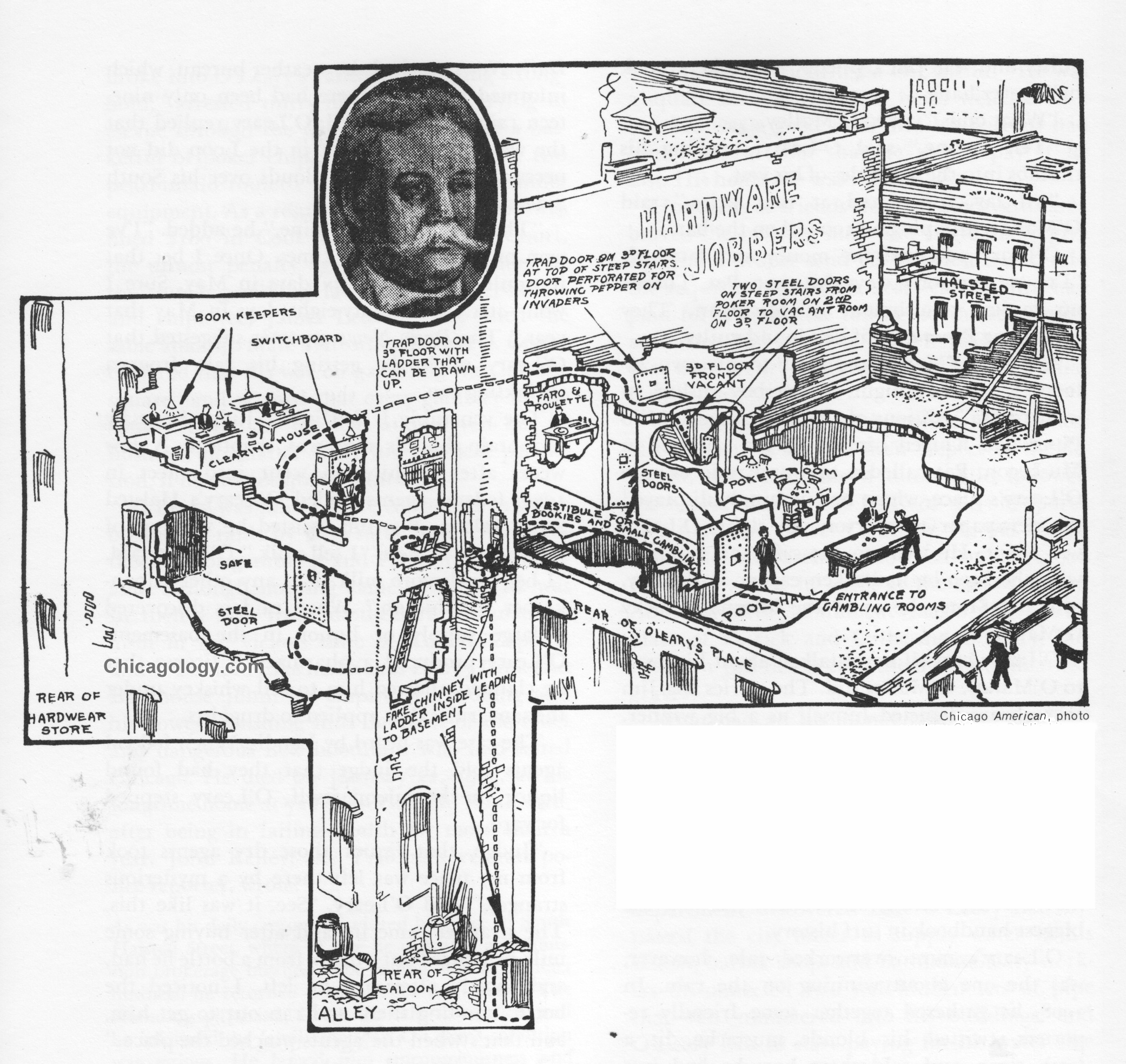 A drawing of the interior of O’Leary’s 4183 S Halsted Street establishment. Big Jim revealed its maze of secret rooms and the fact that his gambling operations were conducted in a supposedly vacant building next door when he announced, on 1 December 1911, that the building was for sale and that he was retiring. O’Leary’s saloon housed only law abiding activities and was internally separated from the building next door by double iron doors.

By the early 1890s, however, he had left the Stock Yards to open a saloon on Halsted Street, which he designed to include Turkish baths, a restaurant, billiard room, and a bowling alley, as well as the detailed race track results and other betting information, near the entrance to the Stock Yards. He also started operating a pool hall and book parlor from the back of the saloon. One of the leading gambler barons in Chicago, O’Leary was known for taking bets on everything from presidential candidates to the weather. His motto was:

Chicago’s longtime alderman-vice lord, Michael Kenna, said of O’Leary, “He was a square shooter. Big Jim never welshed on a bet. He was a good loser and his patrons had confidence in him that he would always pay off if he lost. His home life was ideal.”

In 1904, O’Leary began operating illegal gambling on Lake Michigan with the steamship The City of Traverse. However, without police protection, the ship soon went out of business by 1907 due to repeated police raids whenever the ship had docked. O’Leary however, refused to bribe police and instead had his businesses fortified including the construction of an iron and zinc layered oak door to his resort which were supposedly “fire proof, bomb-proof, and police-proof.” After Chicago crime lord Michael Cassius MacDonald’s death that same year O’Leary gained exclusive control of gambling operations in Chicago’s Southwest Side based in around the Union Stock Yards; in the summer of 1907, Luna Park, opened with O’Leary as its primary owner. The popular park was in operation for four years before its gates were permanently closed.

O’Leary, who had been delivering whiskey to Colosimo’s Cafe under arrangement with Johnny Torrio, was suspected of being involved in the murder of James Colosimo on May 11, 1920. Despite his connection, there were no charges brought against him. By the time of his death in 1925, O’Leary had become a millionaire several times over.

Despite numerous raids by police, he was only found guilty of gambling once during his thirty year career. There was a perception that O’Leary, along with gambling bosses Mont Tennes and “Hot Stove” Jimmy Quinn, controlled the Chicago Police.

O’Leary married Annie McLaughlin, whose family lived in the cottage next to the O’Leary’s at the time of the fire. The couple had five children, two sons and three daughters.

O’Leary’s Saloon Closed.
Jim O’Leary’s famous saloon in the stockyards district was finally closed by the court yesterday, owing to failure by the defendants to comply with legal requirements attendant on the appeal.

Search of the records in federal courts disclosed that more than 190 saloons annually have ceased existence since the injunctions petitions were first filed. These are saloons which were closed and since that time have been reopened under the sanction of the court for other lines of business. Thirty-four of the injunction writs were appealed. 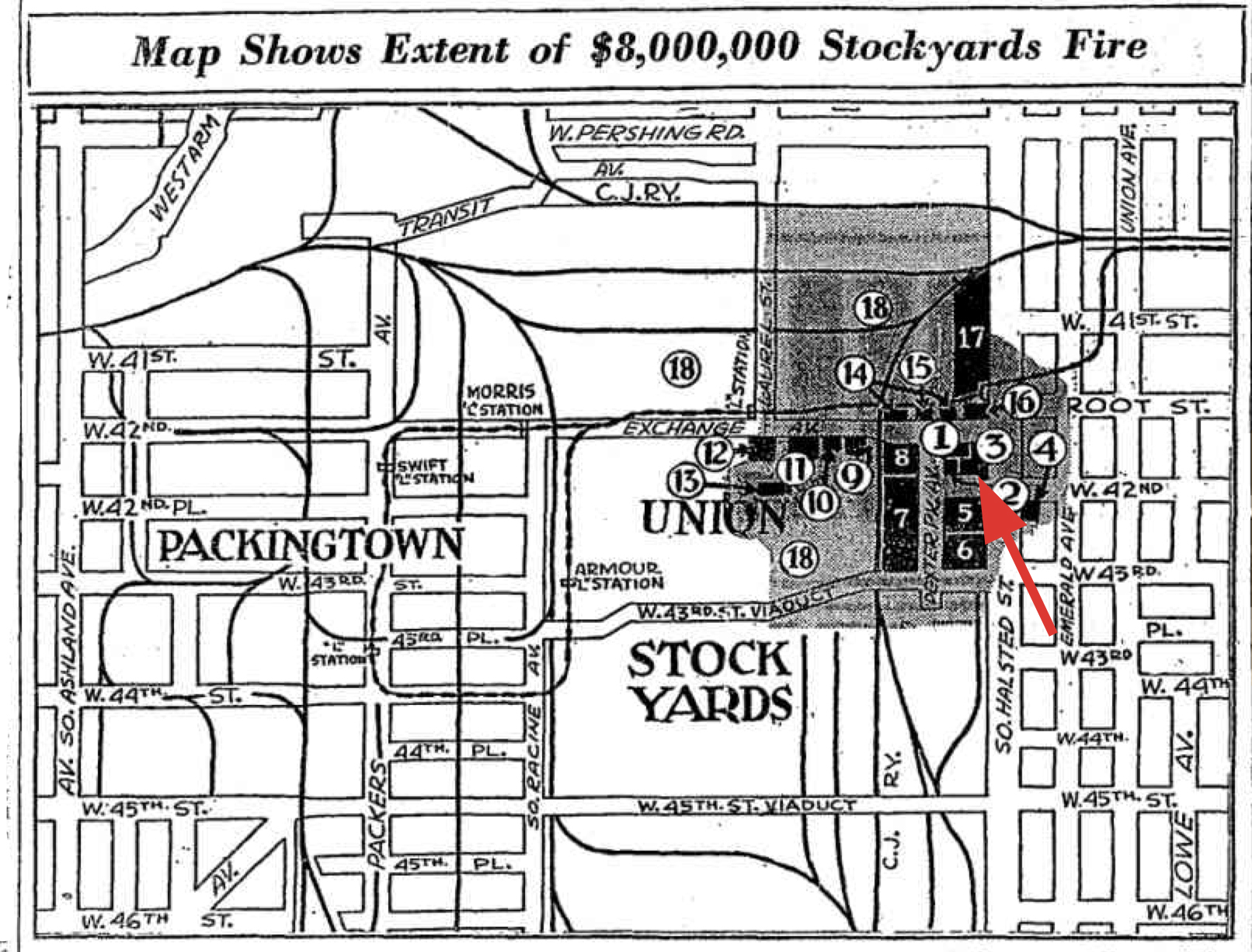