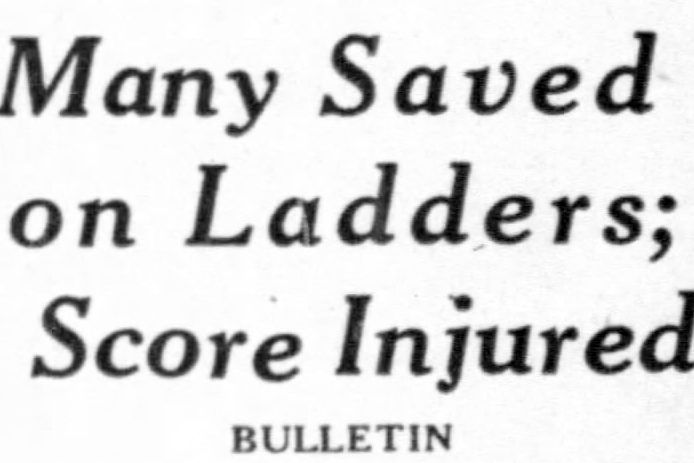 Inspector of Police Edwin Daly estimated that at least 16 persons were killed in the La Salle hotel fire. Ward Walker, a Chicago Tribune nportcr, entered the hotel while the fire was still raging and counted 14 bodies. Seven were lying in the well at the hotel, Walker reported. The dead were being taken to the lobby of the city hall. Extra police were called on duty to prevent looting in the hotel.

At least five persons perished. and more than a score of others were injured or overcome by smoke in a spectacular fire which broke out on the ground floor of the La Salle hotel early today,

Hundreds ot guests were trapped in upper story rooms and many later were carried down extension ladders from as hjgh as the sixth floor. Sill more managed to escape by climbing down steel fire escapes—many clad in scanty night attire.

As flames shot as high as the seventh floor level from the street, the loop echoed to the screams and cries of men and women standing at open windows.

Carry Out Injured Guests
A 5-11 alarm, followed by special calls, were sounded. Firemen rushed into the smoke filled lobby and braved fierce flames that made the mezzanine, in the words of one witness, “a hellish baJl of fire.” Soon firemen were carrying out unconscious guests, picked up in smoke filled corridors. They were taken to the Henrotin and St. Luke’s hospital.

The toll of dead and injured could not be immediately ascertained but the Henrotin hospital reported two men and one woman dead, and St. Luke’s, reported one man and one woman dead. Henrotin admitted l2 smoke victims and SL Luke’s five. The coroner’s office tentatIvely identified two dead as, Delbert Roush, 25, of Newton, Ia., and Bill Denniston, no address. The other victims were\ not identified. An assistant fire chief whose name was Freeman was reported killed in a faU down a fire shaft.

Use Inhalators on Victims
Police and firemen rushed all available inhalator machines to the hotel, and worked over smoke victims on the scene.

Many of the guesUi became panicky. At dozens of windows women screamed or men cried for help while some waved bedsheets out the window to attract the attention.

However. firemen called to them that the worst worst danger was over and urged them to stay In their rooms. Many continued their cries for help, and these, more panicky than the rest. quickly were brought down via tower ladders from the third. fourth, and fifth floors.

Many of those rescued and many others who cl1mbed down cold fire escapes were in scanty attire. Most of them put on coats over their night garments and fled to safety. 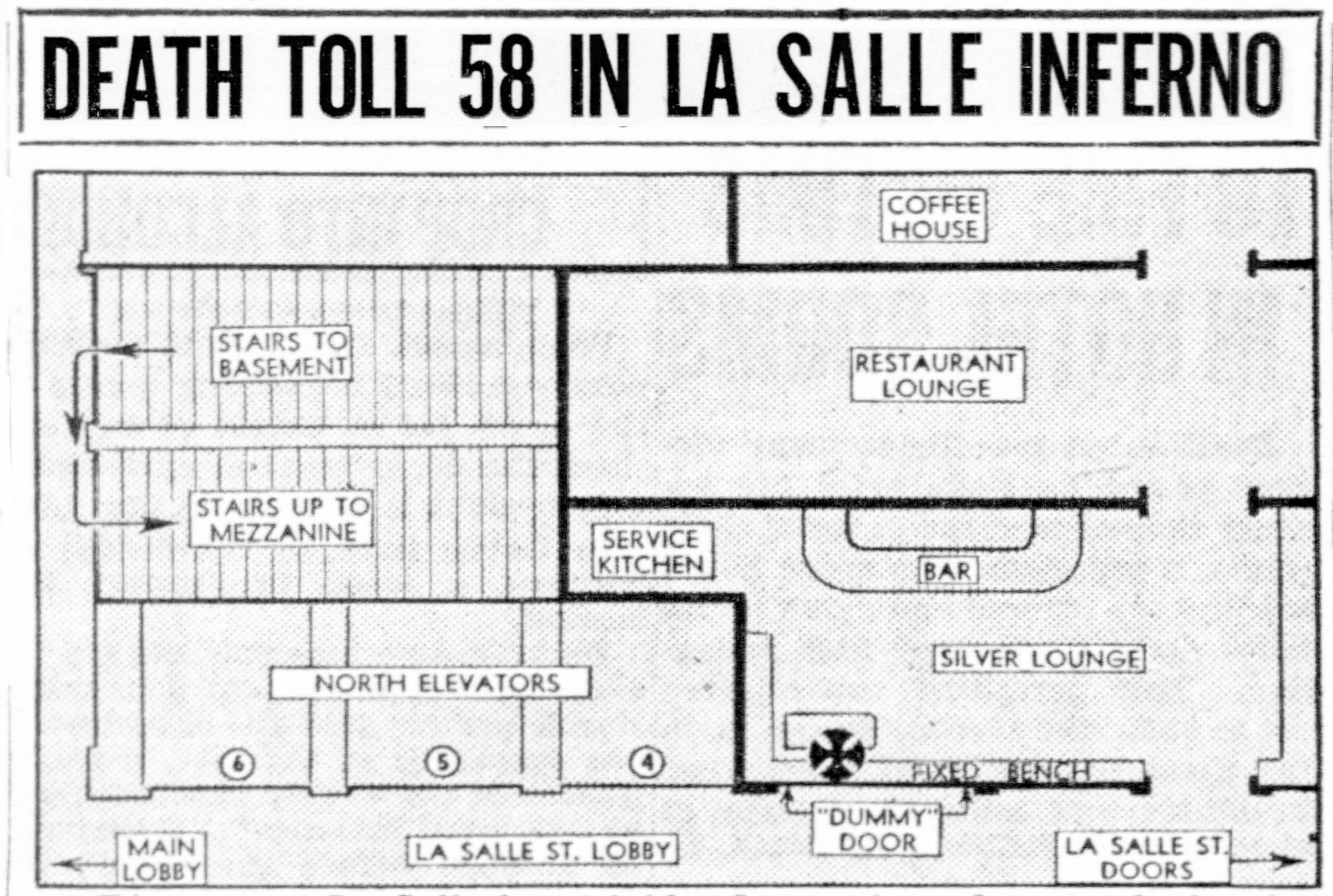 Diagram of the La Salle hotel lobby floor, where the fire raged, showing proximity of lounge bar to elevators, center of blaze at its start.

Many Persons Overcome
“I saw many people overcome on the fourth floor,” said D. S. Taggart, 36, of 10 Prescott st., Boston, Mass., a salesman, “Two men were lying outside my door. Another man and I dragged them into my room. We dropped a note down to firemen, who came up and took them down.”

Marlon Burks of Springfield, Ill., assIstant director of the state department of insurance, and his wife were trapped in their room on the 13th Hoor .

“All Ughts were out, the smoke was so heavy we couldn’t see,” said Burks. “I opened my window and looked for the neurest fire escape. It was about JO feet trom my door. My wire and 1 put wet towels on our faces and felt our way down the hall. Luckily we hit the window at the flre escape. We just climbed down.”

Another man and his wile, both dressed in night clothing. walked 16 floors down the fire escape. They declined to give their names.

Among those carried down ladders were Miss Lorraine Colby, 26, and Miss Eileen Dirich, 18, both of De Kalb, Ill., Mr. and Mrs. J. Godfrey of New York City, and Paul Guisenberry of Cleveland. O., Guisenberry, was one of the fint to turn in an alarm, helped rescue five men. 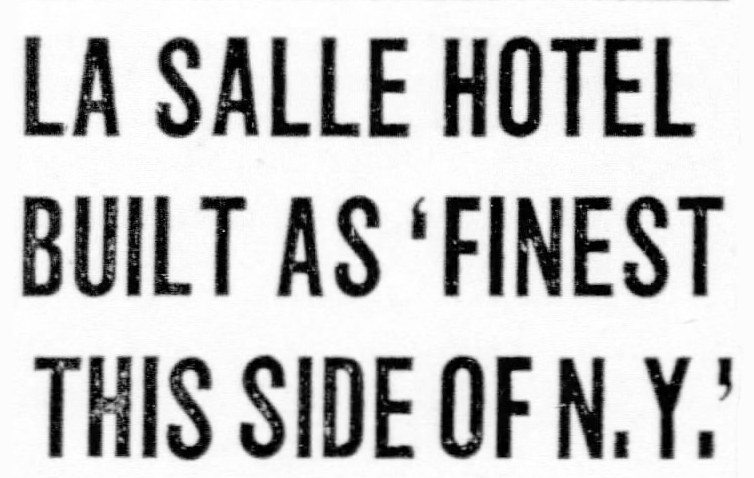 The La Salle hotel, erected in 1908 and 1909 as the “largest, safest, and modern hotel west of New York City,” occupies a location made famous by Chicago’s early day newspapers. Six were located on ground now occupied by the hotel.

The hotel’s Blue Fountain room was the gathering place of Mrs. Potter Palmer and other society leaders in the era prior to the first World war. The hotel’s roof garden drew many celebrities in pre-prohibition days.

Avery Brundage at Head.
The hotel ran into financial difficulties in the depression years. A receiver was named in 1932 and in 1935 the LaSalle-Madison company paid $337,000 cash and approximately 1 million dollars in back taxes for the hotel.

The hotel was leased Jan. 1, 1940, by the Roanoke Hotel corporation, of which Avery Brundage was president. Brundage and his associates exercised their option to purchase the hotel in 1942. 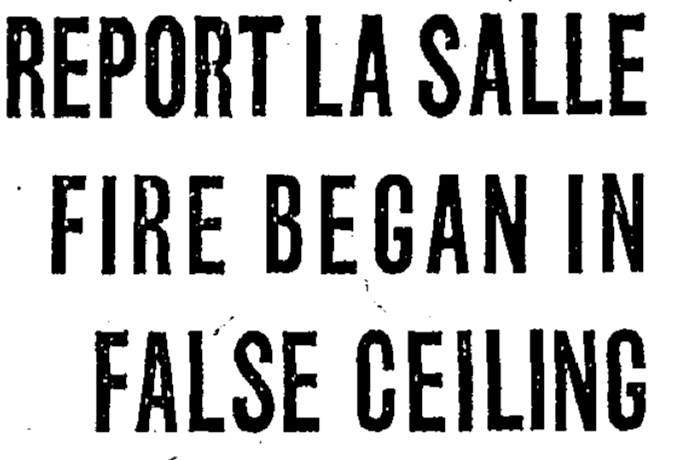 City officials took steps yesterday to close the Lorraine Hotel, 411 S. Wabash av., as a fire hazard at noon tomorrow as fire officials advanced their first specific theory on the cause of the fire which took 60 lives early Wednesday in the La Salle hotel.

Origin of the fire was placed by investigators in the false ceiling above the Silver lounge off the north side of the hotel lobby and the cause was given tentatively as crossed wires.

Expert on Fire Causes
Fire Capt. Frank A. Corrigan’s staff and fire prevention work, gave this explanation after questioning witnesses and studying the fire scene with other investigators. Thielman, considered one of the department’s experts on fire causes, said he will submit a formal report to Commissioner Corrigan later this week.

In his opinion, Thielman said, the fire originated in the air space from 12 to 18 inches in depth, in the ceiling if the Silver lounge. This space was left there some timne ago when the lounge was remodeled and finished in walnut paneling. It extended along the ceiling and also between the walls where similar panels were installed.

After starting in this ceiling, possibly from crossed wires, Capt. Thielman said, the fire apparently burned for some time until it extended down into the walls, Sparks which were seen in an elevator shaft adjoining the wall of the lounge may have been communicated to it thru openings in this well.

Flames Heated Walls.
Eventually, it was said, the flames heated the walls of a corner booth in the cocktail lounge and sparks and smoke shot out when a cushion was lifted. When employes in the lounge squirted seltzer water onto the burning seat, they were far from the real base of the fire, the investigator said.

After accumulating for some time, the fire spread with almost explosive speed when it got into the open and fed on the wood veneer and varnish on the paneling, Thielman reported.

The hotel fire toll was raised to 60 with the death early yesterday of Mrs. Ann Palukis, 24, of 824 Prescott av., Waukegan, who died in Henrotin hospital.

Seventeen persons injured in the fire are still confined in hospitals. Of this number two were described as critical and a third as serious.

The jury found that the flames started somewhere in the walls of the the main floor cocktail lounge. It pointed out these walls were built in 1935 “in conformity with a written agreement made with the building department,” and continued:

“The jury feels that the building department was very liberal in their interpretation of the then existing building code. We recommend that the city council take whatever action is necessary to prevent such liberal interpretation and discretion.” 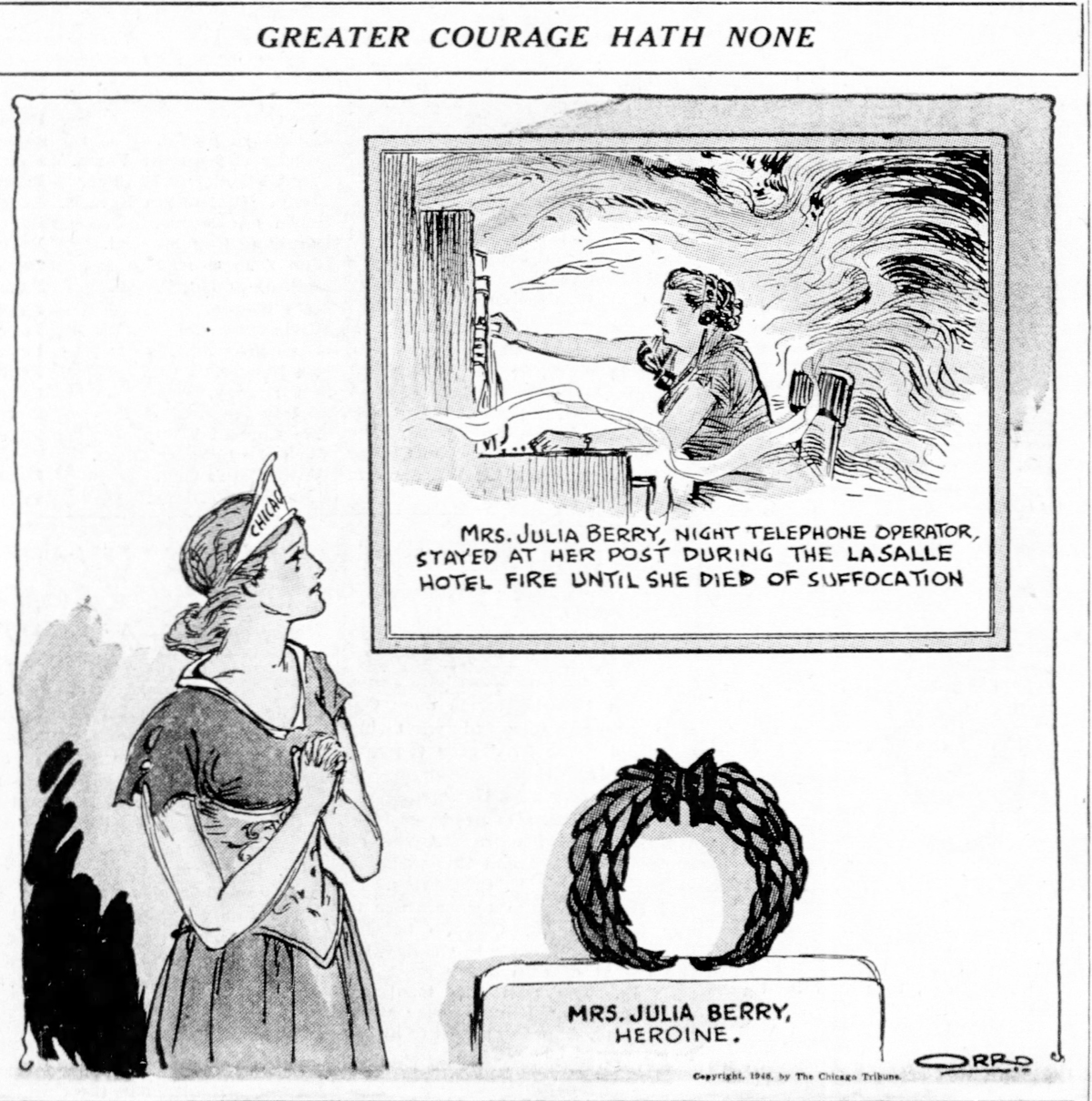 A gold Vail medal and $1,000 has been awarded posthumously to Mrs. Julia C. Berry, telephone operator who remained at her switchboard and died in the La Salle hotel fire June 5, the American Telephone and Telegraph company said yesterday. Presentation will be made to Mrs. Berry’s son, John Joseph Berry, 15 of 6843 Elizabeth st., when the medal and scroll are completed. Young Berry was orphaned by his mother’s death. The award is the 15th since the establishment in 1920 of the fund in memory of Theodore N. Vail, former president of the American Telephone and Telegraph company.