At three o’clock on Friday, December 15th, Patrick Fleming and William Corbett suffered the extreme penalty of the law, for the murder of Patrick Maloney, about one year ago, at a place called Sand Ridge,1 about six miles from Chicago.

For a time the Sand Ridge murder seemed an impenetrable mystery, but active and intelligent officers were silently “working it up” for months, and at last aided seemingly by chance, they were led to the

DISCOVERY OF THE MURDERERS.
In the first excitement about the affair, arrests were made of John Williams, James Maloney, and Michael McDermott, neighbors of the murdered man, with whom it was known he had become on terms of hostility; but nothing could be brought to show that they had any share in the foul crime, and they were accordingly discharged. It then became known to the Police that a hack belonging to Philip Brennan had been driven out, with a party of men, to Sand Ridge, on the night of the murder, but before they became acquainted with this fact the man who had been the regular driver of this hack went off to Chattanooga. For some time they did not dare to make any direct investigations, but at length that driver returned, was arrested, and from him they learned that on the night in question he was sick, and his place was taken by a man named William Gubbins, for the occasion. No time was lost in getting hold of Gubbins, but this was not affected until the latter part of April, 1865, about five months after the commission of the murder. Gubbins came to time very handsomely, when he had to. It does seem a little queer that such a very particularly nice young man as he professes to be and such a model of a virtuous hackman, should never have chosen before that time to give any information to the police regarding the murder, although he must have known of it, and been been very certain in his own mind that it was committed by his “fares” that night. But on the “better late than never” principal, when he was cornered be made a clean breast of the four men whom he had driven out in his hack on the night of November 20th, 1864.

This was in the latter part of April, and nothing more was heard of the matter for about ten weeks, although the officers were vigilantly on the alert for parties answering to the descriptions given. On the night of 23d of April, Patrick Fleming and William Corbett committed a brutal assault on Officer Peter Kendelin, of the Second Precinct Police. The officer fought bravely, and although twice or three times severely stabbed by Corbett, managed to arrest him. Fleming fired several shots at Kendelin, without hitting him, however, and then made his escape, as assistance was coming for the officer, but the next morning he was arrested and the two blood-thirsty ruffians were brought up for trial before the Police Court, on a charge of assaulting the officer with intent to kill. Both were bound over to answer this serious charge at the June term of the Recorder’s Court. The charges having been fully proven against them, they were on the 18th of July, sentenced to fourteen years imprisonment in the Penitentiary. The sentence had been passed and they were about to be taken down stairs to the cells to await their removal to the hospitable halls of Joliet, when Captain Kennedy of the Second Precinct Police, and Sergeant Hickey of the First Precinct, who had previously recognized them as two of the men described by Gubbins, arrested them on the charge of the murder of Patrick Maloney on the 20th of November, 1864, and on this superior charge they were remanded for trial. Gubbins, on being confronted with them, recognized them as two of the parties. Practised in the darkest crime, their consciences hardened and their wicked hearts rendered confident by a long course of successful and undetected villainies, they bore a bold front under the stunning accusation and unblushingly denied their guilt, Corbett admitted that he was in Gubbins’ hack on the night in question, in company with Fleming and another man, but averred that they only went out for ride, and when out by the Six Mile House got out of the carriage for for an innocent little ramble. He was even bold enough to allege that the whole charge was a malicious invention of Capt. Kennedy to obtain revenge on him for a “little difficult” with one of the Captain’s force—this being his pleasant euphemism for his deadly and unprovoked assault upon officer Kendelin. Corbett did not remember that he carried a pistol in his hand all the way into town from the scene of the murder, or that he remarked to Gubbins, when on the driver’s seat, that “a man who is not straight ought to die,” and indignantly demanded to know if there were any proof that he committed the murder. But Capt. Kennedy and Sergt. Hickey werer too able and indefatigable officers not to have accumulated a mass of evidence against them, circumstantial necessarily, but nevertheless fearfully strong, and they were both held to answer at the next term of the Superior Court, that Court holding its term before the Circuit. Fleming was silent, non-commital and defiant—taking no pains to explain or defend anything in his conduct, and seemingly confident that no case could be made out against him. The examination at which they were bound over, was held before Justices Milliken and Sturtevant, on July 18th. Gubbins’ testimony was very full and his explanation why he did not at once give information against them was seemingly a very good one—that he was afraid they might murder him also. These two cold blooded scoundrels were so lost to all feeling of sympathy of humanity that they listened unmoved to the testimony of the grief-worn widow if their victim. Even when she uttered the simple sentence, “I staid alone with my dead husband all that night,” in tones of deepest woe, they looked upon her unconcernedly, and if they had a regret in connection with the subject it was doubtless that they had not received the sixteen dollars each for their fiendish crime. They were remanded to jail to await their final trial, and again the officers set to work to discover the other ramblers of the little coterie of professional murderers.

It may be very hard for even the keenest and most experienced detective to obtain the clue to a great crime, but the starting point once reached, he pounces on his prey with comparative ease thereafter. So Capt. Kennedy and Sergt. Hickey were only week in capturing the quartette of Hibernian devils. Drinking one night in a low saloon on Polk street, a man named James Flinn told an acquaintance that he had been out with Fleming and Colbert, the night of the Sand Ridge murder. The name of the man has never been divulged, as it has been feared that if either of these desperate villains ever regained his liberty he would take vengeance on the informant by murdering him. This man acquainted Capt. Kennedy with what he knew of Flinn’s complicity in the affair, and that same day Flinn was securely placed under lock and key in charge of the police. He was very much frightened, and volunteered, if insured of his own safety, to give all the information in his power regarding the affair. His offer of turning State’s evidence was accepted, and as the first fruits of his information, John Kennedy, the fourth of gthe company who went out on that memorable night to Maloney’s house, one of the trio believed to have so cruelly murdered Maloney in his own door, was arrested.

On July 27, Kennedy was brought 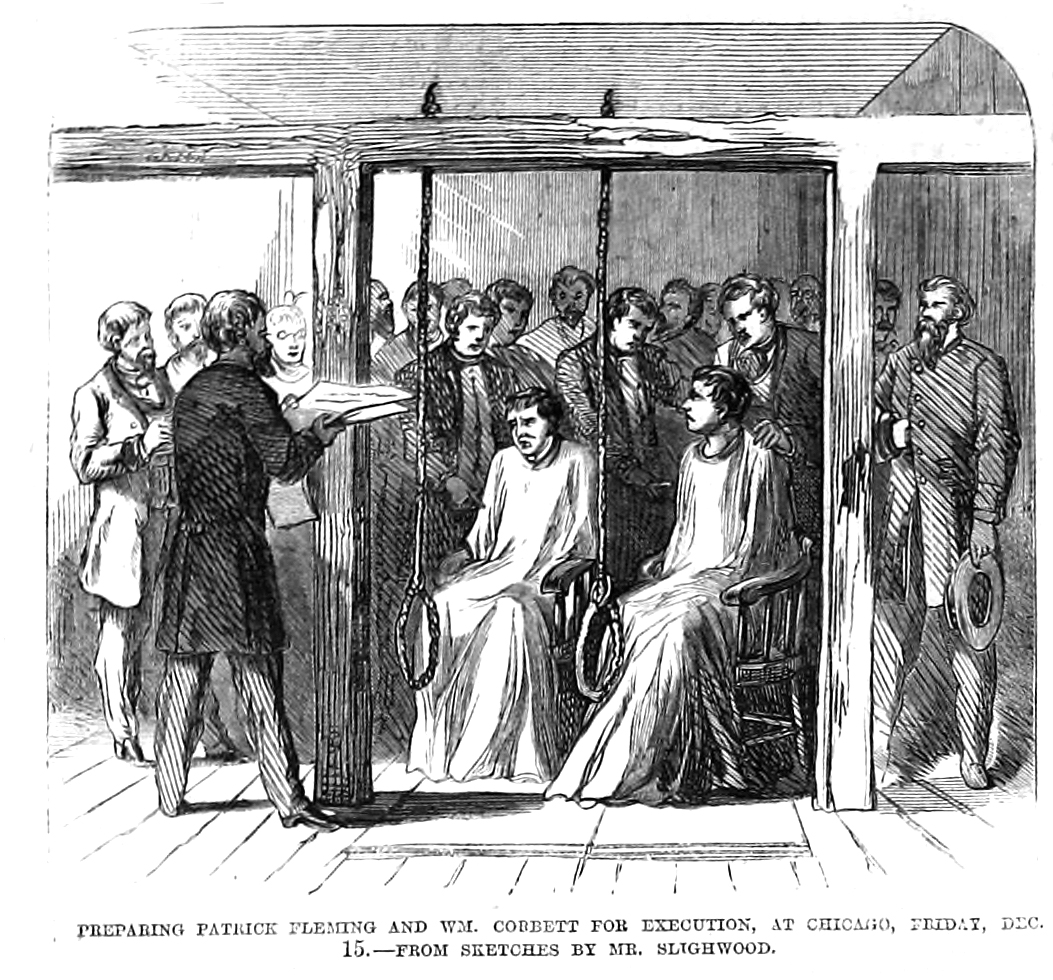 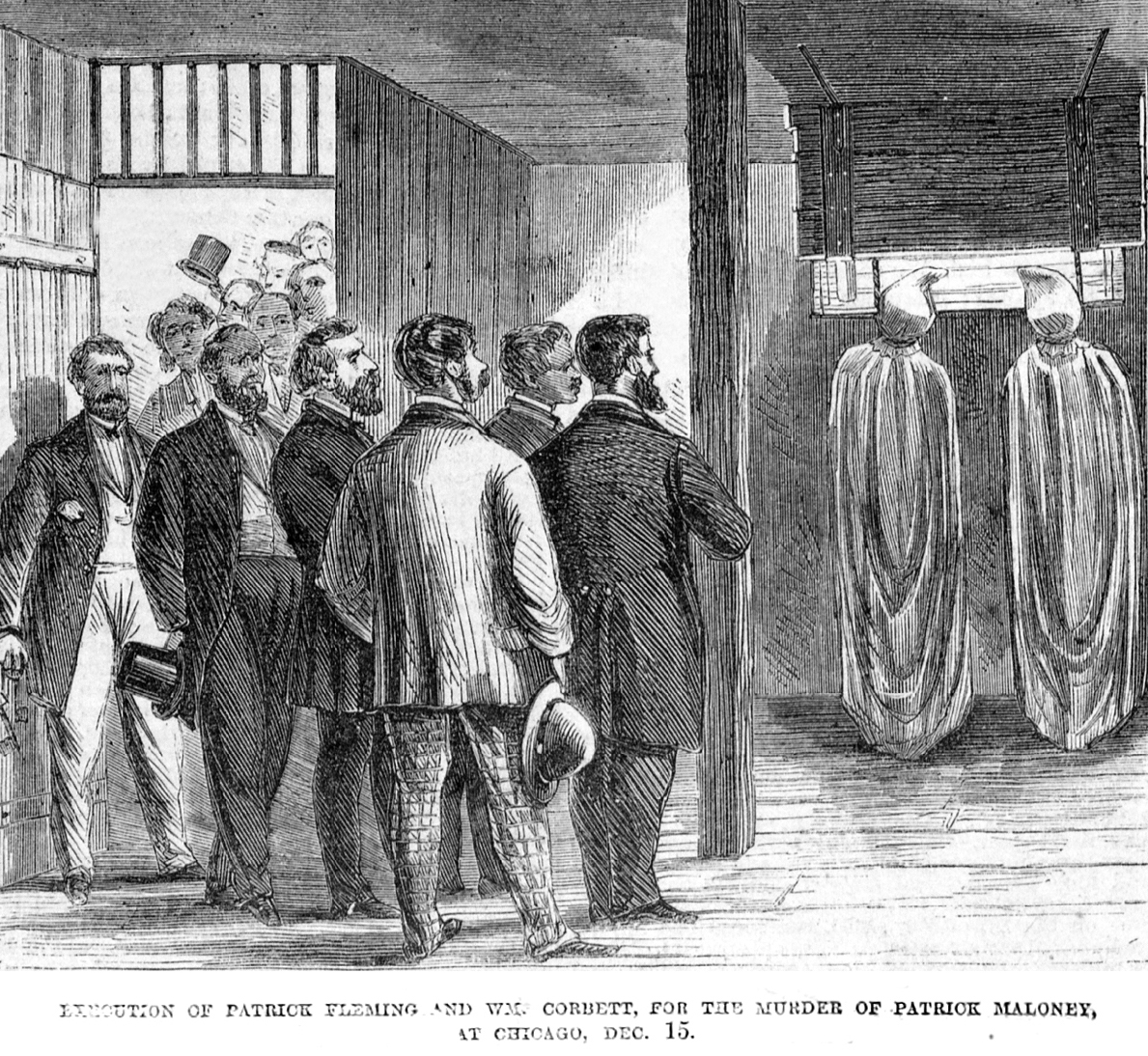 Only three hangings took place inside the Courthouse before the Great Fire of 1871. Two of them on the same day for the same murder.

NOTES:
1 Austin (Sand Ridge) was created in 1865, when developer Henry Austin purchased 470 acres for a temperance settlement named “Austinville” (Chicago Avenue to Madison Street, and Laramie to Austin Boulevard). The town was incorporated into Chicago in 1899.