History of Chicago. From the Earliest Period to the Present Time by Alfred Theodore Andreas, 1884

Before the Recorder’s Court, June 15, 1855, the indictment found against fourteen of the participants in the “Beer Riot” of April 21, 1855 was taken up, and the motion for separate trials overruled. There was some difficulty in getting a jury, and it was not completed until the 1st. Soon after the municipal election in March an issue was joined with the foreigners on the liquor question. March, Mayor Boone issued a proclamation notifying saloon-keepers that the ordinance requiring their places to be kept closed on the Sabbath would be strictly enforced. That was on Saturday ; and on Sunday, the 18th, owing to the insufficiency of the notice, there were naturally many violations, and many arrests, but the next Sunday the saloons were very generally closed. At the trial of several of these saloon cases on Monday, March 26, before Justice H. L. Rucker, of the Police Court, the defendants raised the question of jurisdiction. They claimed that as these were criminal offenses, they could be prosecuted only by indictment ; and that criminal cases cognizable by Police Court justices meant such cases only as that entire body of the judiciary, known to the Constitution as Justices of the Peace, might try and determine. A few days later, Justice Rucker decided that the Justices had a right to try saloon cases.

Meanwhile, at a meeting of the Common Council, March 27, the license to sell liquor was fixed at $300 from that date to July 1, 1856, when the prohibitory liquor law was to go into effect if sanctioned by the votes of the people at the preceding June election. Some dealers paid the fee and others gave up the business, but most preferred to test the question in the courts and before the people. 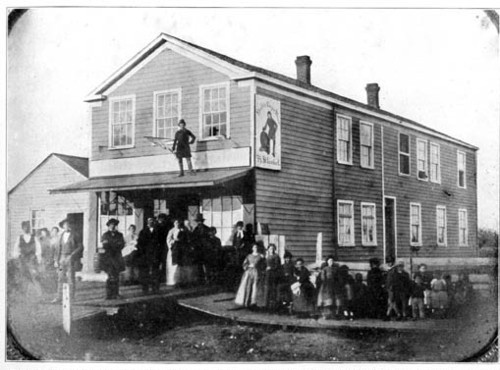 Frequent meetings were held in North Market Hall by saloon-keepers and brewers, mostly Germans, urged on and encouraged by wholesale liquor dealers and the allied interests generally. They issued for gratuitous distribution a campaign paper known as the Anti-Prohibitionist. Meanwhile Rucker’s decisions continued to be given in favor of the city with aggravating uniformity. Early in the contest it was announced in behalf of the defendants that whenever an adverse decision should be rendered, the case would be taken by successive appeals to the Supreme Court. A large number of these cases were to be tried on Friday, April 20, before Justice Rucker. During the week active preparations were made by the malcontents for a demonstration in force, either in the hope of overawing the court, or with a view perhaps to serve a sort of mob-law notice on the municipal administration just elected on the Know-Nothing ticket, that they should not expect to force their puritanical notions down the foreign throats, where beer and liquor had been wont to flow unburdened by so heavy a tax. On that day, about one hundred men, headed by a drummer, marched through some of the streets and took up a position on Randolph Street, opposite court-house square, where they remained until it was learned that the cases would not then be heard, as Mr. Rucker was out of town. On Saturday, April 21, the demonstration was repeated, when the crowd came into collision with the police, who had been ordered to disperse them. As the mob rounded the corner of Clark and Randolph streets about eleven o’clock, they were met by the officers of the law when about a dozen shots were fired by the more hasty spirits in the crowd.

Peter Martin an alleged rioter, was killed; J. H. Reese and J. H. Kedzie, two unoffending citizens, were wounded: George W. Hunt, a policeman, was so severely injured in the arm that amputation became necessary, and Nathan Weston, another officer, was also dangerously wounded. Some seventy or eighty ” rioters ” were arrested and jailed, but only fourteen were held, indicted and brought to trial. The Light Guard, Hying Artillery, and a number of special policemen sworn in for the occasion, patrolled the streets for three or four days and nights until their own excitement, the alarm of the authorities and the apprehensions of non-combatants had subsided.

The liquor-dealers published a card May 2, denying the allegation that the money contributed by them was designed to be used in resisting the laws; their purpose was to test the legality of the new license law, which was personally oppressive, and from a business point of view too restrictive of trade. The Anti-Prohibitionist, they also said, was published for a similarly broad and statesmen like reason, to oppose an innovation unheard of in all history. The trial begun June 15, and closed June 30, with the acquittal of all except two, who had been more clearly identified with the alleged violence to the police, or had been more feebly defended. These were Farrell and Halleman, both Irishmen, who were sentenced to one year in the penitentiary, but were granted a new trial by Recorder Wilson, July 11, on the ground of interference with the jury by the constable in charge. They were not again brought to trial, it seeming little less than a travesty of justice that in a sedition notoriously German the only victims should be two Irishmen, accidentally caught in the crowd, without any evidence of previous affiliation with the malcontents.