The Chicago Daily (Evening) Journal was first issued on 22 April 1844, by an editorial committee composed of William H. Brown, George W. Meeker, Jonathan Young Scammon, S. Lisle Smith and Grant Goodrich; said committee having been appointed by the association the purchased the Daily and Weekly Express. The paper was published from the old office of the Express for a few months, when it was removed to the Saloon Buildings, on the southeast corner of Lake and Clark streets. After the defeat of Henry Clay to James K. Polk, Mr. Norris withdrew from the paper and Richard I. Wilson, the pungent paragrapher, continued it alone. In the volume for 1845, the number for October 30th is numbered 254 that for October 31st is 155, the serial numbers being continued from the latter number. On 29 December 1845, Nathan C. Greer (who had previously been in charge of the press-room), was associated with Mr. Wilson, as editor and publisher, and on 6 January 1846, the caption that had been printed in Old English disappeared and plain English letters took its place.

Occupying the afternoon field, the Journal found numerous opportunities to demonstrate the advantages which it had in purveying news, it often announcing events of tremendous consequence before the morning papers would get into action. This applied with special emphasis during the civil war, when news facilities were difficult to secure and telegraphic reports had to be supplemented with couriers and correspondents that found themselves seriously handicapped in forwarding their news to its destination.

One of the important pieces of news to be credited to the Journal in war days was the announcement of the surrender of Vicksburg and the capitulation of Pemberton’s army to Grant. So far-reaching in effort was this that though the struggle was maintained for a considerable period, it is conceded that the rebellion never recovered from the Vicksburg victory. Lee’s collapse at Apppomattox was first made known to Chicago readers through the medium of the Journal, while the capture of Sudan by the German army and the obliteration of the fortunes of Emperor Napoleon III, were first announced to Chicago’s citizens by the “Old Reliable,” as the Journal came to be considered by its patrons.

The Evening Journal, whose West Side building at 17-19 S. Canal was undamaged from the Great Fire in 1871, gave the Chicago Tribune a temporary home until it could rebuild. In 1929, the newspaper was relaunched as the Chicago Daily Illustrated Times. 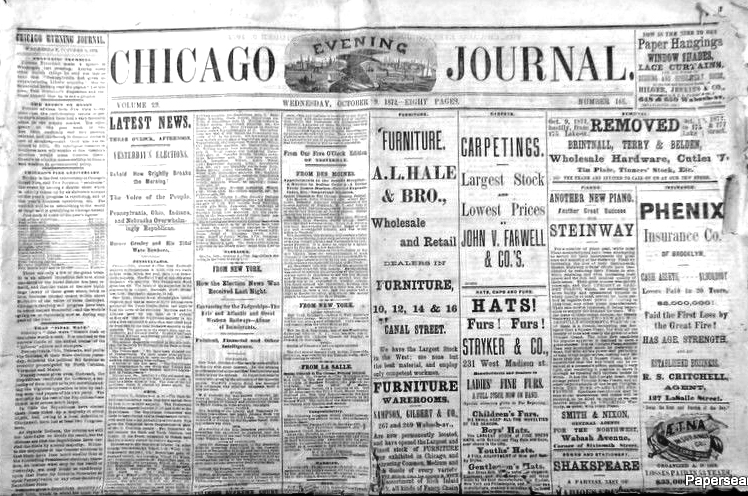 HISTORY OF THE CHICAGO JOURNAL.

It was away back in the days when Chicago had a village government and about 4,000 people that the
spirit of the early settlers demanded a daily paper, and the Chicago Journal was born. This publication was built upon the failure of others. With its very first period of success and permanency, it was identified with that plucky and gifted family of Wilsons, in which name and ownership it has carried good tidings and bad to the ever increasing population of Chicago and the middle west, lo! these nearly sixty years.

The whig spirit of primitive Chicago first found expression through the Chicago American, in 1839. This gave way to the Express, in 1842. On April 20, 1844, that paper was sold to the coterie of pioneers who began the publication of the Chicago Journal April 22, 1844.

The Henry Clay campaign was on at the time, and Polk, the rival candidate, was supported by the Morning Democrat, the organ of John Wentworth. Here began the great political career of the Chicago Journal It has hammered democracy ever since, and put a cap sheaf on its political services by its brilliant support of the republican ticket and leaders in the campaign of 1900, ‘just closed.

During the decade from 1850 to 1860 the Chicago Journal widened its influence, while it met with the loss of one of the guiding minds of its earlier career. The Journal advocated the annexation of Hawaii early in the 50’s. In 1853 it branded the act of the legislature in prohibiting immigration of free negroes to the state as the “grossest law that defiles our statute books.” It was late in the 50’s that the Journal became the early and vigorous champion of the republican party, then struggling for existence. Then and there its fearless editors and publishers proclaimed for protection and for civil liberty, and for nearly forty years its pages have been constant in their support of men and measures represented by republican platforms. It was Charles L. Wilson, editor of the Journal, who introduced in the Illinois convention this resolution: “Resolved that Abraham Lincoln is the first, last and only choice for United States senator in place of Stephen A. Douglas.” It was on Mr. Wilson’s suggestion that the famous Lincoln-Douglas debates were arranged. It was through the Journal editor’s personal influence that William H. Seward was induced to come west and aid in the election of Abraham Lincoln. It was through the columns of the Chicago Journal that Chicago and the west got first intimations of the approaching civil war.

The war period of the 60’s formed another distinct epoch in the Chicago Journal’s history. President Lincoln recognizing the Journal influence, appointed its brilliant editor, Secretary of Legation to the Court of St. James, London. The inimitable Benjamin F. Taylor became chief war correspondent at the front. His writings in the Journal columns gave him world wide fame, and no publication west of the Ohio river was so close to the homes and hearts of the western people.

The Journal, like all other Chicago papers, lowered its price from five cents to two cents back in the 80’s. Later, with nearly all others, it became a one-cent paper. But its character was not changed except to modernize and popularize the paper, which continued to hold the choicest patronage of Chicago merchants, and to be constantly read by thousands who had been friends and patrons before the fire, before the war, even before many of the present generation were born. To-day the Chicago Journal is bright, clean and forcible, and is found on the right side of every public question. Like wine, it appears to improve with age.

When the Chicago Journal was established in 1844 the staff consisted of the following : The editorial committee—J. Lisle Smith, William H. Brown, George W. Meeker, J. Y. Scammon and Grant Goodrich, assisted by J. W. Norris and Richard L. Wilson as office editors and business managers. After the election, which resulted in the defeat of Mr. Clay, Richard L. Wilson purchased the controlling interest in the Journal, and was its editor-in-chief until 1849, when he was appointed postmaster of Chicago by President Taylor. But he again resumed his editorial duties after his removal by President Filmore, the firm name being Richard L. and Charles L. Wilson. Richard L. Wilson died in December, 1856, and his brother, Charles L., became sole proprietor. The staff was then made up as follows : Andrew Shuman, associate editor ; George P. Upton, city and commercial reporter, and Benjamin F. Taylor, literary editor.

In 1861 President Lincoln appointed Mr. Wilson secretary to the American legation at the court of St.
James, London, and between this date and 1864 the paper was managed by John L. Wilson, an older brother. From 1864 until 1869 the two brothers conducted the Journal jointly, when John L. retired in favor of Col. Henry W. Farrar, his son-in-law, who was on General Sheridan’s staff, while the latter had his headquarters in Chicago.

When the great fire of 1871 proved so disastrous to Chicago the Journal building, with most of its contents, was burned. But with true western enterprise its publishers rented a small job office on the west side of the river, and that evening, October 9, Chicagoans read their paper at the usual hour, the Journal being the only paper to come out. Another fire destroyed the Journal on December 1, 1883, and again the Journal was published at the regular time without any assistance from the outside, though much was offered.

The Journal was among the first to materially assist in rebuilding the heart of the business district following the great fire. By April, 1872. it had its six-story marble front building at 159 and 161 Dearborn street, ready for occupancy. This was its home for nearly a quarter of a century. In 1895 the Journal occupied quarters at 120 Fifth avenue while a new and larger home was erected. In 1896 the paper was moved into the new Journal building at 160 and 162 Washington street, its present home. This twelve-story marble and stone structure, side by side with the elegant Times-Herald building, is one of the finest newspaper sites in the west.

Charles L. Wilson died in March, 1878, in San Antonio, Tex., and the controlling interest of the Journal passed into the hands of his widow and daughter. A reorganization of the firm then took place, with Andrew Shuman, who was lieutenant-governor of Illinois from 1876 to 1880, as president and editor-in-chief, and Henry W. Farrar, business manager.

On March 1, J. R. Wilson, a nephew of Charles L., leased the property. Later he became principal owner and publisher, having associated with him Mr. Shuman as editor-in-chief and W. K. Sullivan as managing editor. In 1888 Mr. Shuman retired. Shortly afterward Mr. Sullivan gave up editorial management, to
accept the consulship to the Bermuda islands, by appointment of President Harrison. He was succeeded by George Martin. Later Slason Thompson succeeded Mr. Martin, and he continued until 1896.