Maurine Dallas Watkins moved to Chicago from Radcliffe, Massachusetts and in February, 1924 landed a job as a reporter with the Chicago Tribune. Her assignment was to write about crime in Chicago with a woman’s perspective. By early April, she was winning front-page bylines, no small feat in those days, and the stories she wrote were doozies.

Her first byline came with an account of a case involving a woman named Beulah Annan.

No one knows exactly how Maurine Watkins got her first and last full-time newspaper job, only that she breezed into the Chicago Tribune newsroom on the second day of February in 1924.

One story– and there are several– has it that she wrote the city editor a letter that listed 13 reasons why he should hire her and challenged him to find the 14th, counting on superstition and moxie to do the trick.

In another version, she charmed him with her looks. With big, blue eyes and masses of brown hair she wore in a braid, not bobbed in the fashion of the day, she had a demure, old-fashioned air that the city editor, gruff and stodgy as all editors of legend are, predicted would win the confidence of those who might mistrust the coarser sort of reporter.

Whatever Watkins did, it worked. She was hired at $50 a week, quite a respectable salary in 1924, to write about crime from a “feminine” perspective.

The editor’s prediction was right, of course, as all predictions of legend are. Watkins managed to sneak her way into the funeral of Bobby Franks, the boy murdered by Leopold and Loeb, as a mourner, and she interviewed the educated young killers just hours before they confessed.

But it was a pair of murderesses, one beautiful and the other rich, who would help make Watkins wealthy and, for a short time, well-known.

She detailed their powdered complexions and patent-leather slippers, their unscrupulous lawyers and duped juries with an elegant, skewering wit that propelled her stories onto the front page. (She called one of them a woman “whose pursuit of wine, men, and jazz music was interrupted by her glibness with the trigger finger.”) 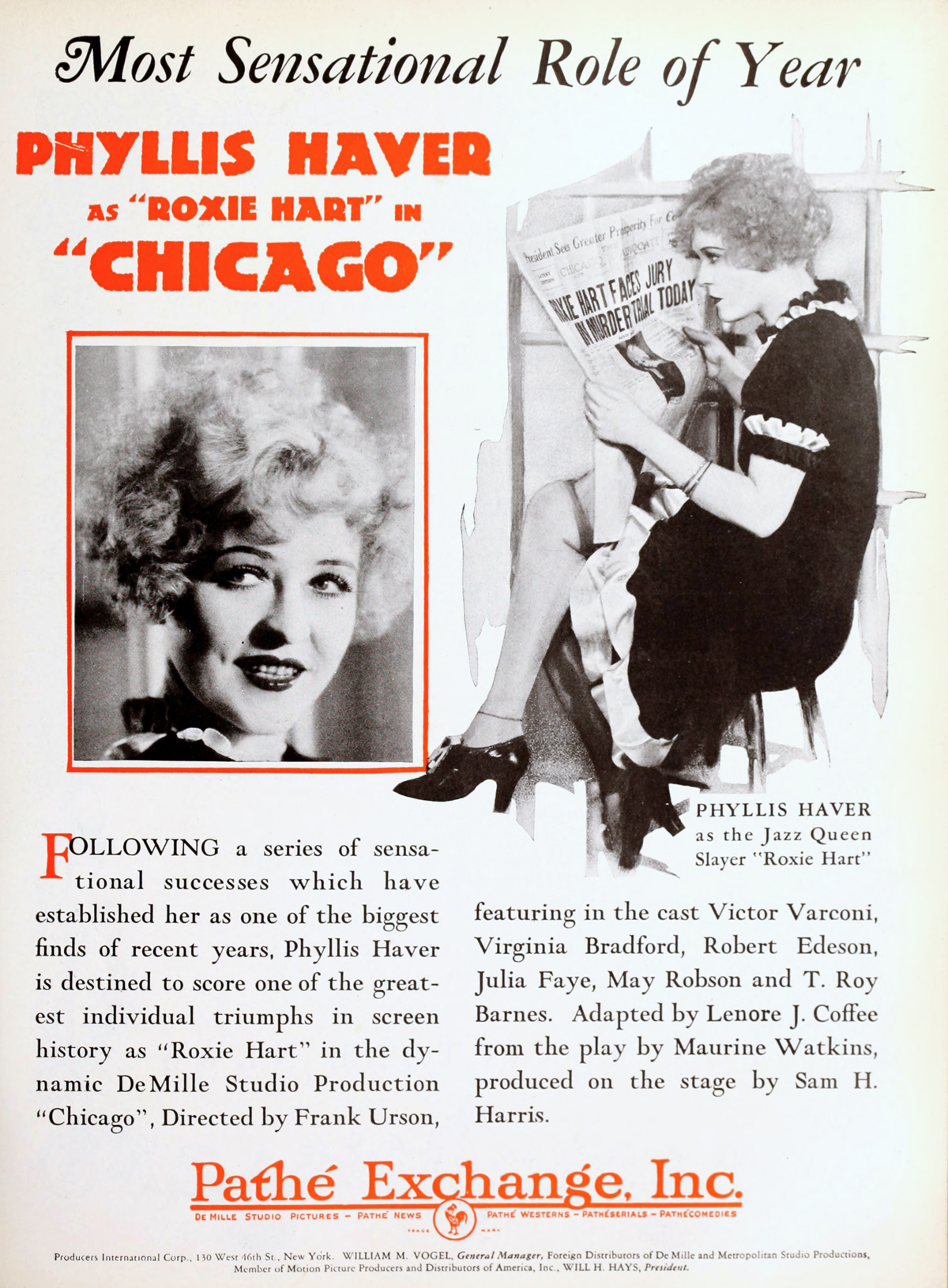 And, when Watkins left the Tribune for New York after just six months, she had in the women’s tales the makings of a Broadway play that would become one of the biggest hits of the 1926-27 season.

Now, a musical version of Watkins’ play is returning to its hometown for a six-week run at the Shubert Theatre. “Chicago,” which won six 1997 Tony awards, is one of the biggest blockbusters on Broadway. The play’s origins and its author, though, have faded into dim footnotes. After “Chicago,” Watkins never had another one of her plays produced, and she died in obscurity in 1969, a mysterious recluse who wore a black veil over her face whenever she appeared in public.

Over the years, she turned down every request to buy the rights to “Chicago” out of what some speculated was regret over the role her reporting had played in the acquittal of two women who committed murder.

It wasn’t until six years after her death, with the permission of her estate, that director-choreographer Bob Fosse’s musical version of “Chicago,” upon which the current production is based, opened on Broadway.

This is where the threadbare skeins of the story of Maurine Watkins would unravel were it not for another story whose threads, oddly enough, pick up exactly here.

In 1975, John Elliott’s high school drama club from Portland, Ore., went on a trip to New York City, where they saw “Chicago,” among other plays. Elliott was intrigued by the mention of Watkins in the program.

Some years later, hobbled by a broken foot and a lack of purpose, he came across some material by her that he had gathered while he was in college. Elliott fell in love. He calls it infatuation now that he’s settled back down in Portland and happily married. But, at the time, it was enough to send him on a three-year quest, crisscrossing the country looking for clues about her life.

What he found fills more than two dozen black binders, not to mention several boxes worth of manuscripts, and includes everything from an interview mentioning that Watkins stopped drinking milk at the age of 5 to the only copy of a play she wrote in college.

Elliott ran out of time and money before he could write the biography that he still hopes to finish someday, and he admits, with palpable regret, that he has let the flame of his devotion flicker in recent years.

But he continues to maintain a Maurine Watkins home page, which can be found at http://www.at-first-site.com/mdw/index.html, along with sites for his Web page design and country-western dance businesses.

He probably knows more about Watkins than anyone else can claim to, and where other records leave off he fills in the gaps, though there are still gaps to fill.

“Maurine didn’t court publicity, and she kept trying to keep people away from `Chicago,’ ” he says of his lonely pursuit. “How was there going to be any stampede of admirers to her door?”

Maurine Watkins was born on July 27, 1896, in Louisville, the only child of a minister named George Wilson Watkins and his wife, Georgia May Long Watkins, a schoolteacher.

The family moved to Crawfordsville, Ind., where Watkins attended high school. Her yearbook described her as the “prettiest girl in the senior class.” She was also the smartest, graduating first in her class.