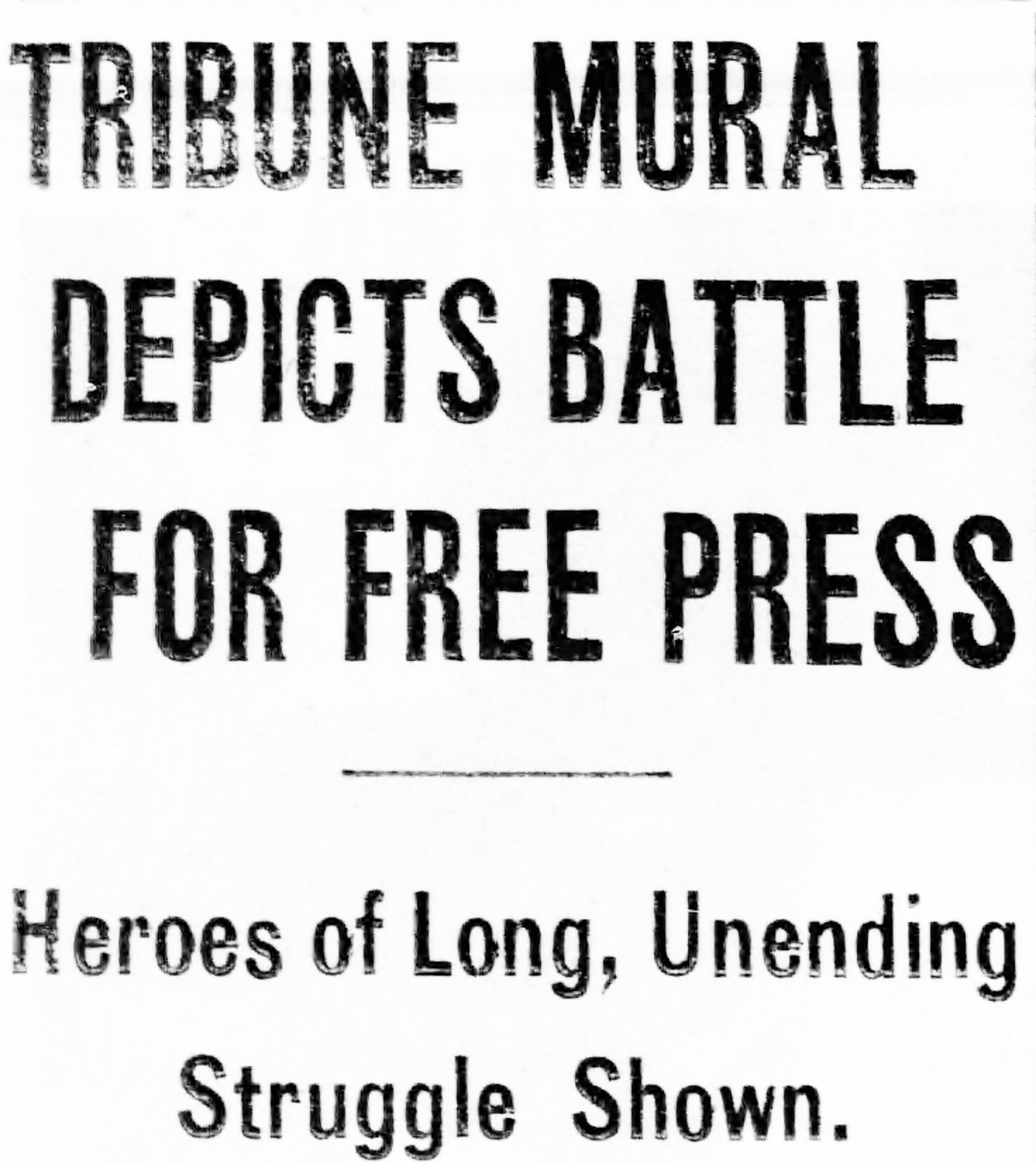 A 18 by 23½ foot mural entitled “The Freedom of the Press,” vividly depicts the age old struggle for liberty of speech and of the press, has been mounted on the east wall of the lobby of the Chicago Tribune Tower.

Mrs. Clara Fargo Thomas, distinguished mural painter of New York, a member of the National Society of Mural Painters, is the designing artist. She is a descendant of the Fargo family of express company fame.

Mrs. Thomas, well known as a horsewoman, created the murals at Grasslands, home of the Southern Grasslands Hunt and Racing foundation at Gallatin, Tenn., and has designed murals for the offices of Col. R. R. McCormick in the News building in New York, for Vincent Astor, Percy Rockefeller, and William Ziegler, and in the royal suite in London’s Governor House.

Her 14 panel mural, “A Pageant of Beauty,” is now being shown at the Texas Centennial. 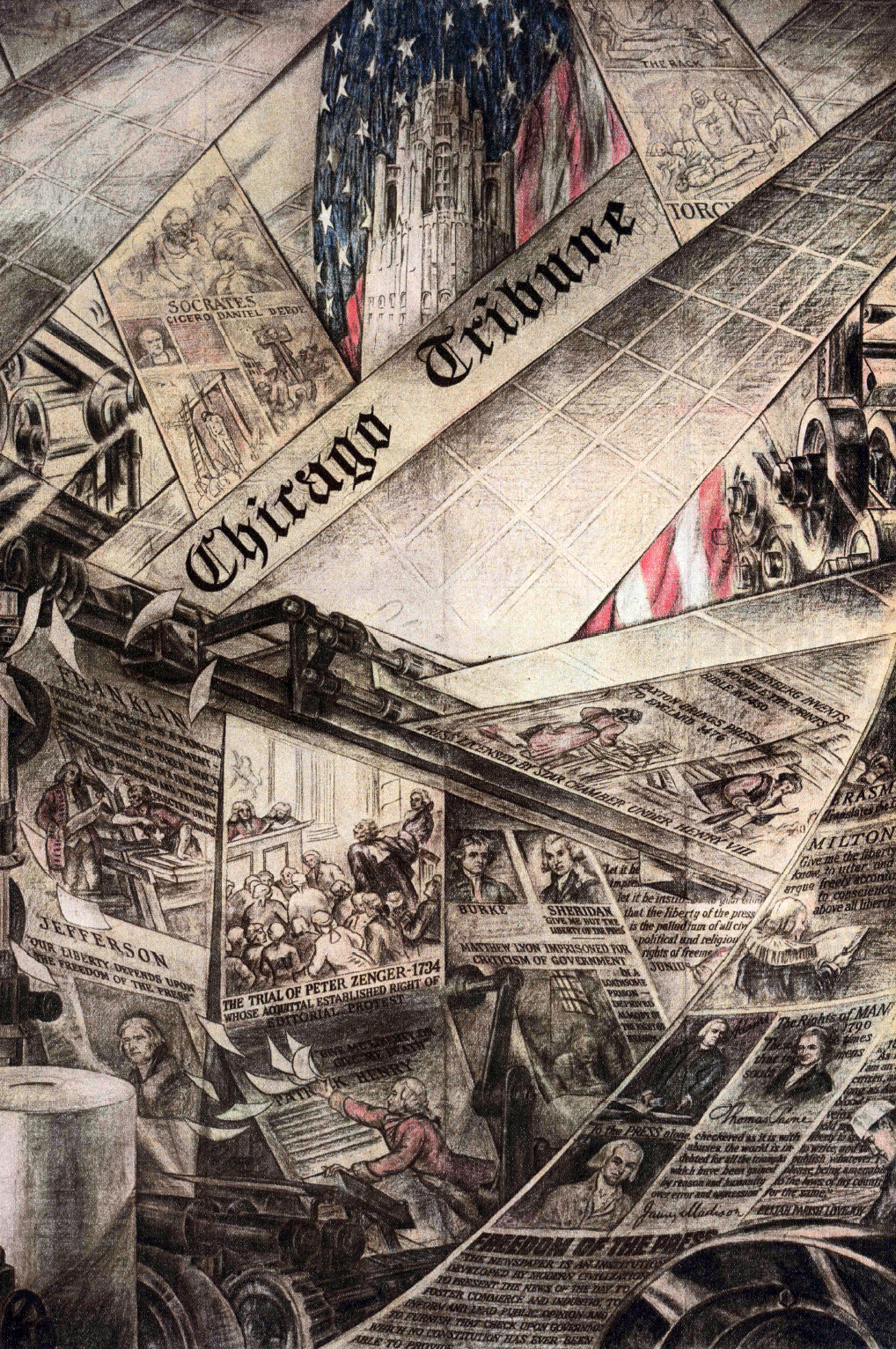 AN EPIC DEPICTED BY ANY ARTIST—In “Freedom of the Press,” a mural done in crayon and mounted in Tribune Tower lobby, Mrs. Clare Fargo Thomas of New York epitomizes the never-ending struggle for liberty to speak according to conscience. Upon a symbolic background of gigantic presses in action the artist has imposed impressions of immortals who have battled against tyranny in this war for human liberty. The mural is 16 feet by 23½ feet.

Pastel Crayons Used.
The mural in the Tribune Tower lobby is in pastel crayons on paper in burnt sienna, black, and reds. Lyn Faucett of New York, an assistant to Mrs. Thomas in mechanical matters, who was here installing the mural, told how this unusual medium for murals was reached.

Mrs. Thomas chose freedom of the press her theme when that subject figured in the news of the day. After many months of work on one treatment of this theme, which primarily emphasized the trial of Peter Zenger in 1735, her sketch was photographed full size and hung in the lobby. She disliked the work and cast about a new treatment.

Taking a trip through the pressrooms of The Tribune, Mrs. Thomas was struck with the streams of news print flowing from the presses. She then conceived the idea of showing the story of the free press in pictures and type, the story being printed on newspaper as they come unfolded, in broad ribbons of paper, off the presses.

Planned Trial Sketch.
Enthusiastic over her newly envisioned theme, the artist returned to New York to work it out, completing a drawing in full size in four vertical panels in a short time. Her idea was to use it only as a trial sketch, then paint the final in oils on canvas.

With final touches and corrections, however, the rough sketch became the finished mural. It has been preserved by three coats of especially prepared varnish.

Masses of shining machinery, a vigorous showing of printing presses in action, pour forth their output of newsprint in the mural. Framed by the white paper are the pictorial representations of incidents in the fight for free speech.

Ancient Heroes Shown.
In the upper part of one panel are seen Socrates drinking the hemlock, and Cicero. Socrates was accused of being an atheist because he questioned the conventional ethics and religion of the time. Cicero was beheaded because he dared to speak against the Triumvirate, and after his head was severed needles were stuck in his tongue.

There, too, is, Daniel Defoe in the pillory. (Defoe, master journalist of the 18th century, editor of the London Review was befriended by William III. After the death of the monarch, he lost favor, and when he wrote the anonymous “Shortest Way with the Dissenters,” whose authorship was discovered, he was sentenced and exposed in the pillory for three days. The populace rallied to him and his punishment proved a triumph, but he was imprisoned a month.)

Sketches of the scaffold and the rack and torture chambers of the Inquisition show the penalty of free speech in earlier days of medieval terrors.

Comes the Printing Press.
On a panel to the right Gutenberg and his invention, movable type, with which he printed the Bible in 1450, are seen. Caxton, in red robe and wig, with the printing press he brought to England in 1476, follow. Such a furor did this cause that Henry VIII put the press under license in charge of the Court of the Star Chamber. This is a story the mural tells.

John Milton is shown writing his essay, “Areopagitica,” in protest against a later licensing law enacted by the Long parliament. Beneath the poet, shown with a great white ruff at his neck, is a quotation from the essay: “Give me the libert to know, to utter, and to argue freely according to conscience, above all liberties.”

The hand and quill of “Junius,” under whose name appeared the celebrated letters in the London Public Advertiser from 1769-1772 which are credited with crystalizing the desire for liberty and constitutional rights both among the American colonists and at home, are shown.

Quotation Is Reproduced.
The following quotation from “Junius” is given:

Let it be impressed, let it be instilled into your children, that the liberty of the press is the palladium of all civil, political, and religious rights of freemen.

The scene shifts to America. Thomas Paine, most famous of revolutionary journalists, is shown and an excerpt is given from “The Crisis,” which Paine wrote while a volunteer side-de-camp in Washington’s army during the retreat through New Jersey. The excerpt is:

These are the times that try men’s souls.

Famous Trial Depicted.
Prominently displayed in the mural is the courtroom scene of the trial of Peter Zenger of New York. This courageous Dutch editor was brought to trial for libel because he dared to expose the tyrannical misrule of a royal British governor. Despite the prejudicial rulings and attitude of the court Zenger was freed by the jury in a case which established the right of newspapers to print the truth about public officials.

In the panel are men who spoke in opposition to, and the men who were the victims of the sedition act, passed by the Federalist majority in 1798. Here are President John Adams, who signed the act (its life was for three years), and Madison, who said it was unconstitutional. It was designed to curb attacks on the administration by Republican editors.

Madison’s words are repeated in the mural:

To the press alone, checkered as it is with abuses, the world is indebted for all the triumphs which have been gained by reason and humanity over error and oppression.

American Patriots Shown.
Thomas Jefferson, who became President on the downfall of the Federalists, a result attributed by some historians to the reaction against the sedition laws, immediately pardoned all those sentenced under those laws and declared them unconstitutional. His portrait, with those of Burke and Sheridan, of Patrick Henry, and Benjamin Franklin, is seen in the mural.

In the lower right hand corner of the mural is the date 1837, and a quotation from Elijah Parish Lovejoy, heroic abolitionist editor who was slain by the Alton mob.

As long as I am an American citizen, and as long as American blood runs in these veins, I shall hold myself at liberty to speak, to write, and to publish whatever I please, being amenable to the laws of my country for the same.

In the lower right hand corner is the only unnamed figure in the whole sweep of historic incidents; a modern printer, tending a press, with a cap of folded newspaper on his head.

Dominating the entire mural is a view of the top of the Tribune Tower with a section of the flag forming the background.