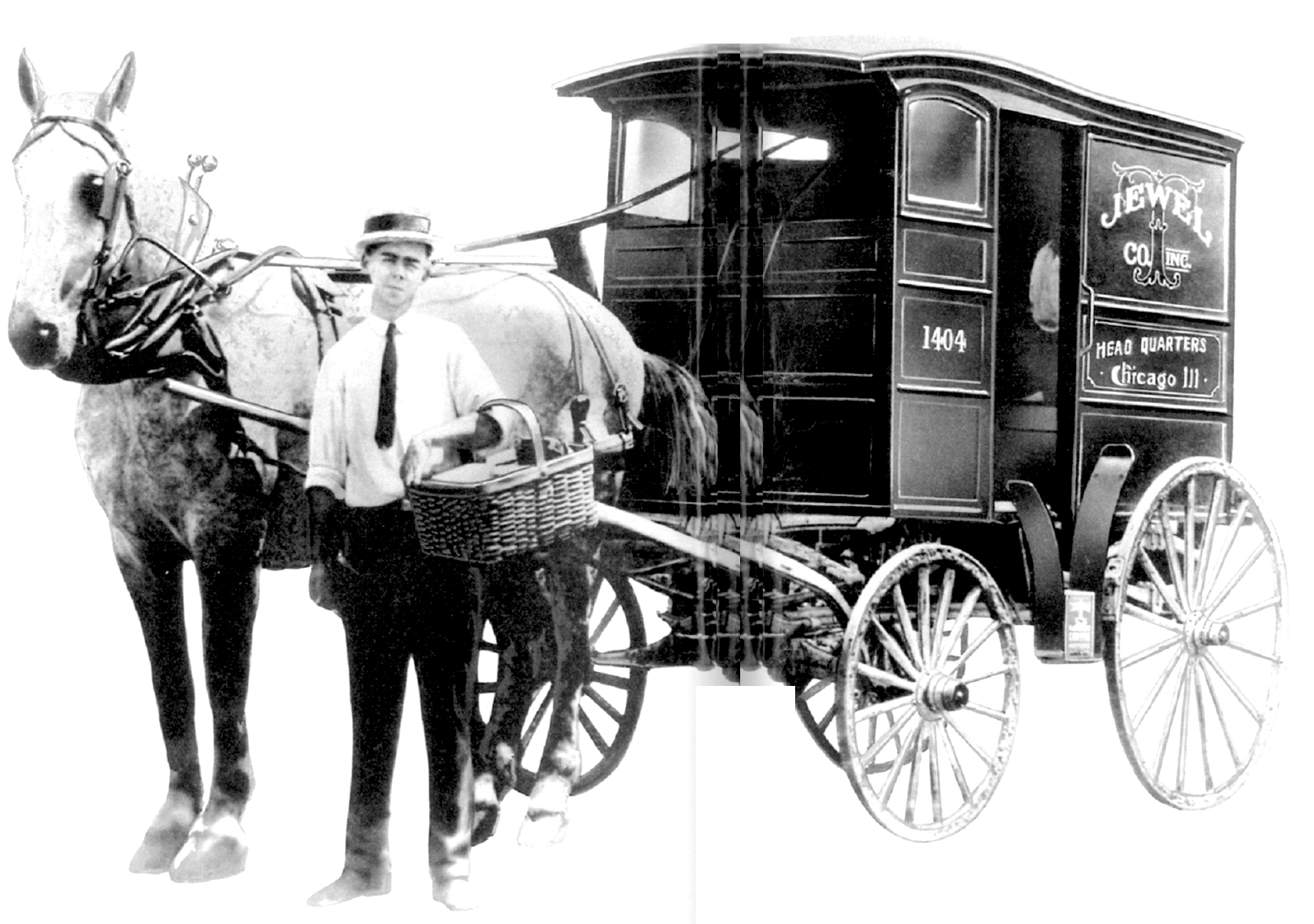 One year before the Century’s turn a Chicago tea salesman named Frank Vernon Skiff who had saved $700 started a wagon route on his own, peddling dry groceries from door to door. He peddled for two years before he hit on a way of making his business different from any of the other hundreds of mobile stores weaving in and about Chicago.

Frank’s idea was to offer his own coffee, which would be roasted every week. He saved up a few hundred dollars, bought a second hand wagon and horse, and a small stock of housewares, including his own fresh coffee, tea, spices and extracts. His first route was down by the Chicago stockyards. A couple years later his brother-in-law Franklin Ross joined him in this venture and they called their new company Jewel Tea, even though coffee was their main product. They chose Jewel because in those days anything of a superior nature was called a jewel. They took turns driving the delivery wagon and soliciting new business.

There were many tea companies at that time, and they all sold door-to-door, giving premium coupons with grocery purchases. When enough coupons had been saved, the customer had a choice of premium items offered. One day Mr. Ross knocked on the kitchen door of a prospective customer and had hardly stated his business when she grabbed a broom. He returned later that same day and learned that the lady had saved coupons for six months buying coffee and tea from a “wagon man” and had expected to get a rug with her coupons. However, the wagon man stopped coming around. Mr. Ross quickly offered her a premium to be left with her first order, to be paid out with a later trade.

This story varies from a broom to hot water, but the fast thinking Mr. Ross with his idea of advancing the premium set the Jewel Tea Company apart from all other existing tea companies of the day. 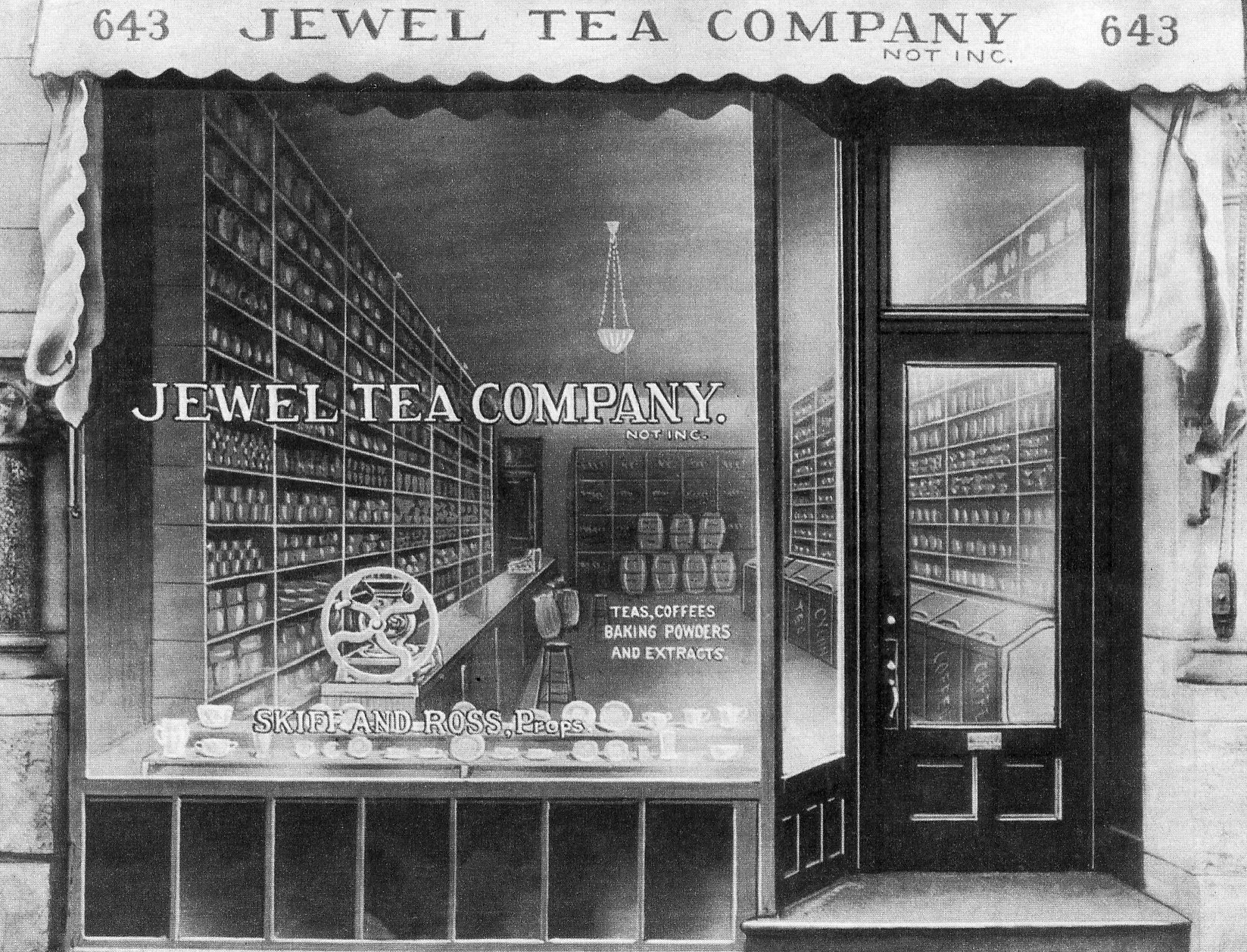 Skiff and Ross’ “not incorporated” store at 643 E. 43rd Street was Jewel’s first permanent location in Chicago in 1901. This is where they made their coffee and teas. 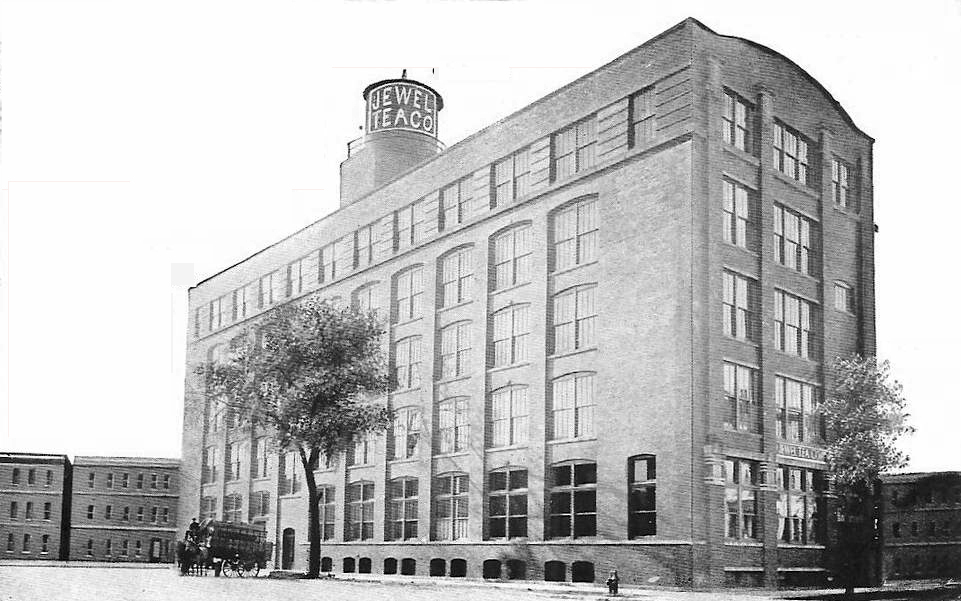 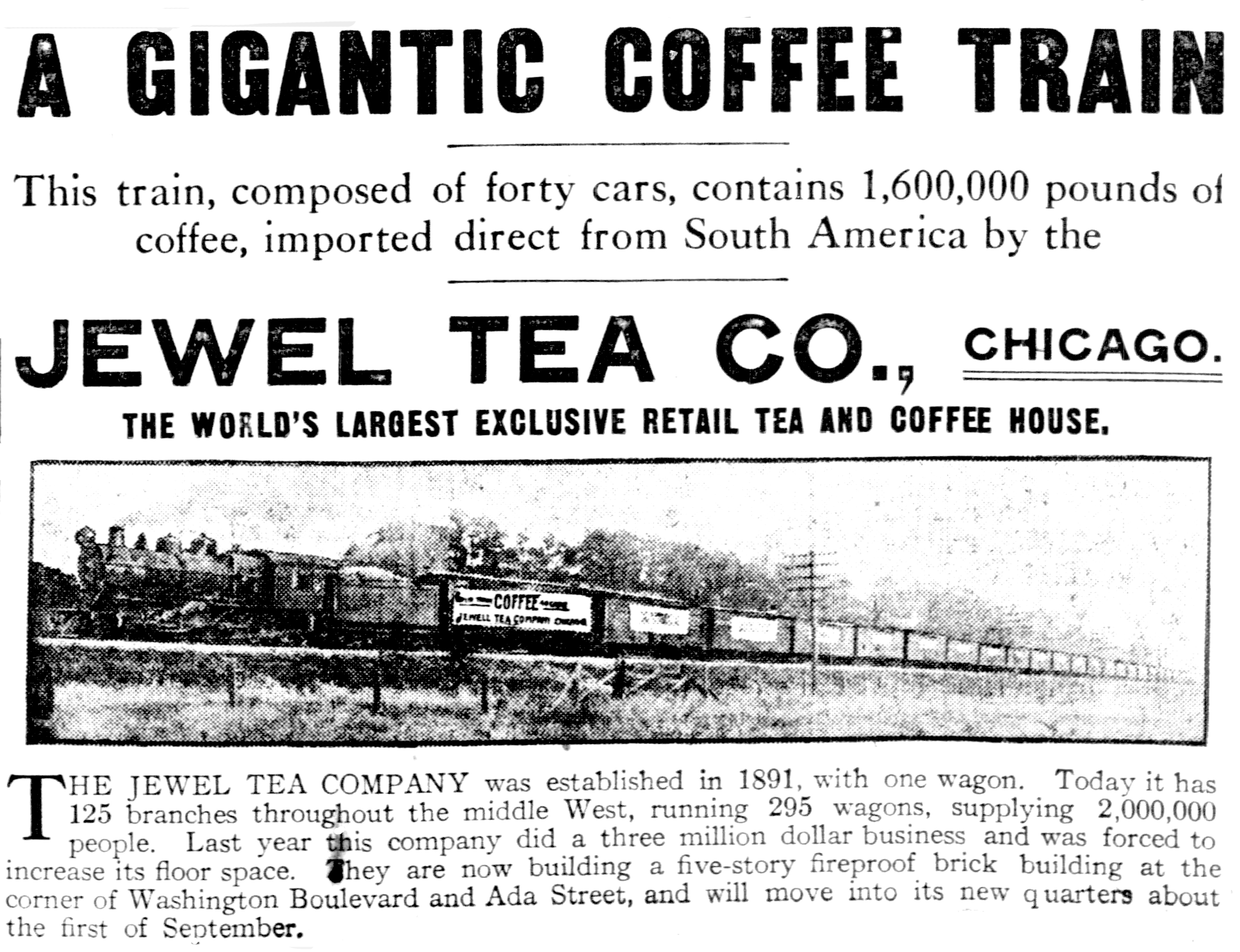 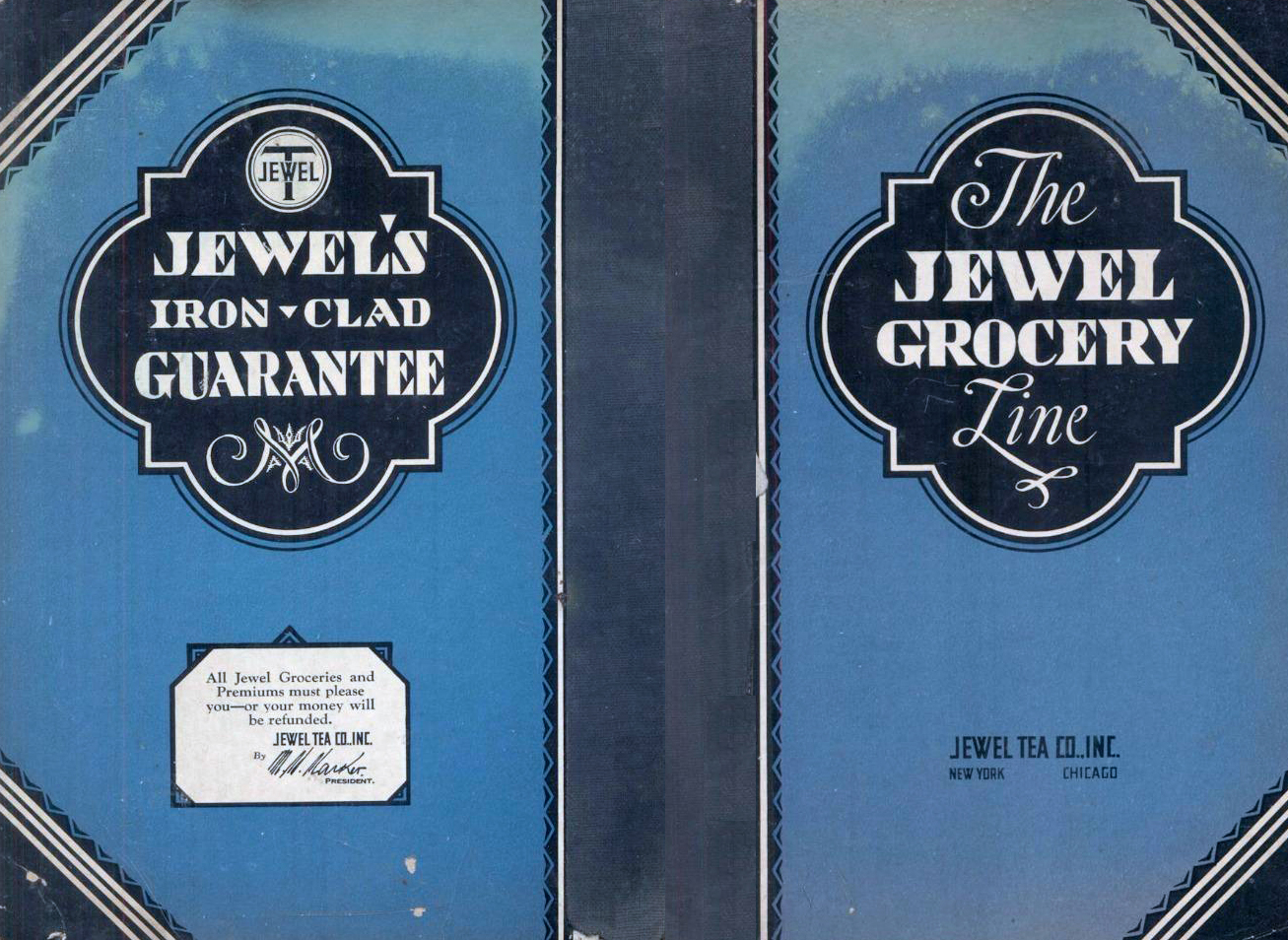 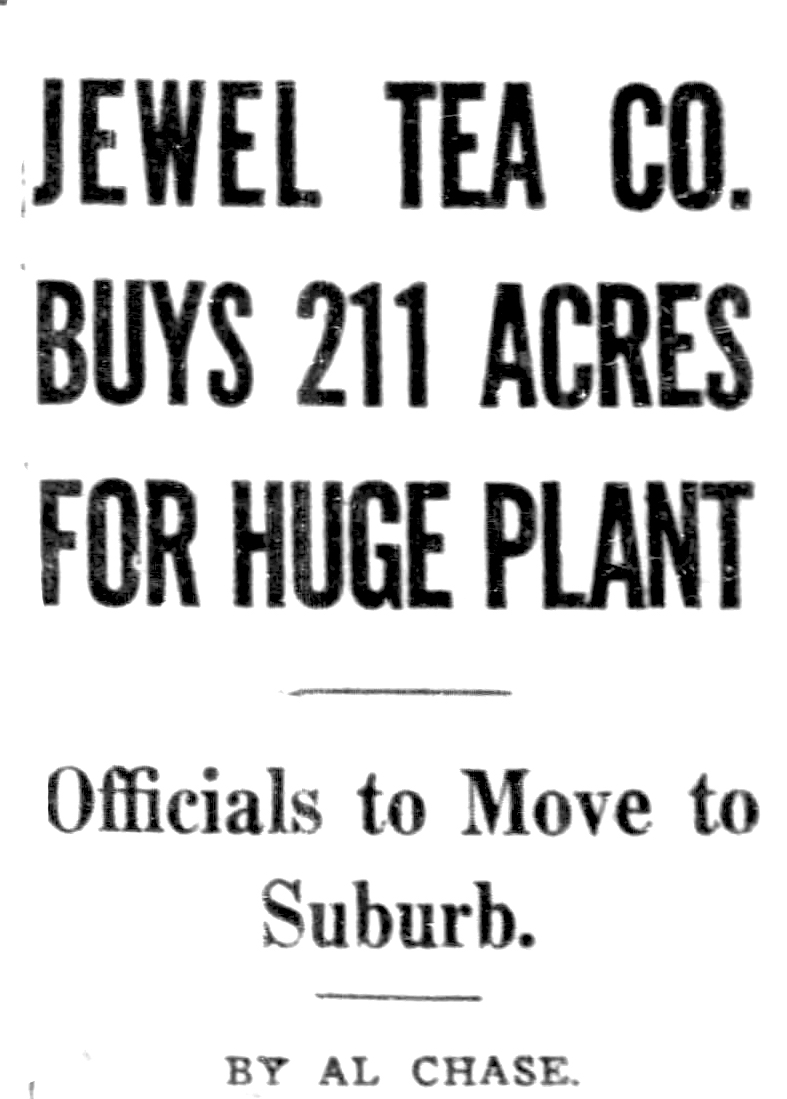 Barrington, a tiny suburb straddling the Cook-Lake county line thirty-two miles northwest of the loop, is going to be the scene of Chicagoland’s most interesting and significant industrial-residential developments, as a result of a big real estate deal closed yesterday. M.H. Karger, president of the Jewel Tea company, announced the purchase by his firm of 211 acres in the northeast part of the town, on which a huge business and home development program is to be carried out.

The total investment in land, industrial, and office buildings and equipment will be approximately $1,000,000, according to Mr. Karker. In addiction it is expected several million dollars eventually will be invested in employes’ homes on the 211 acre tract.

The purchase by the Jewel Tea company of the Barrington property means the concentration of that concern’s general offices, now in the Kesner building, Madison and Wabash, and of most of its light manufacturing and warehouse activities now conducted in Chicago and Brooklyn, N.Y.

The consideration was approximately $500 an acre, part of which was subscribed by Barrington citizens in collaboration with the Barrington Chamber of Commerce.

“Barrington, in view of the tentative plans of the Jewel Tea company to build on the property, can normally expect to see the erection of approximately 250 new homes, substantial increases to school equipment, churches and general business buildings and activity,” said an official of the tea concern. The company employs 250 persons in Chicago.

The proposed Jewel Tea company building at Barrington will be 400 feet long, with a depth pf 100 feet. The main section will be five stories high with wings of two stories each. It will be of concrete construction. Floor space will approximate 200,000 square feet. Holabird & Bird are the architects.

Holabird & Root designed the above monumental structure, which is to house practically all of the manufacturing and office activities of the Jewel Tea company. It will stand on a 211 acre tract of land purchased yesterday in the northeast part of Barrington. It is expected to satisfy a civic demand in that suburb for more business and more inhabitants without bringing heavy manufacturing or obnoxious industrial activity into that quiet residential comminity. Details are given in another column. Gilbert Hall made this picture.

Aside from the business lines, the huge building will house various welfare activities, such as a swimming pool, bowling alleys, a cafeteria, an auditorium, card rooms, squash or handball courts, a company garage, etc.

Probably Chicagoans don’t know much about the Jewel Tea company, although it’s a local concern, for its products are not sold in Chicagoland. In fact, it has no stores at all, unless you’d call a motor truck a shop on wheels. All of the products of the company are sold to to its 800,000 customers, scattered about in 5,000 American cities and towns, located in thirty-four states, by means of more than 1,200 automobiles. The company empploys 2,000 person throughout the country.

“The idea behind the Jewel Tea company’s move in the Barrington direction is a desire to get the large grocery and food business out of the city, where a more satisfactory and pleasing environment will be found,” explained President Karker. “A more close and congenial association of employes is hoped for.

The company’s present lease on its plant in the Central Manufacturing district expires on April 30, 1930. It is hoped to complete the Barrington plant by April or May of 1930.

Acquisition of the seventy-seven Chicago stores of Loblaw Groceterias, Inc., by the Jewel Tea company has been completed, according to an announcement made yesterday by the latter firm. The deal which has been under way for several weeks gives Jewel its first retail outlets in a metropolitan center.

Previously the firm’s business has been confined to distribution through a system of delivery routes throughout the country.

It also was announced that Jewel had acquired the entire business of the Middle West Stores company operating four stores. The new properties will be operated under separate management as a subsidiary known as Jewel Food Stores, Inc.

The acquisitions will not affect the development of the company’s present system of distribution, but will enable it to develop business in Chicago and other areas of concentrated population where wagon routes cannot operate economically, officials said.1 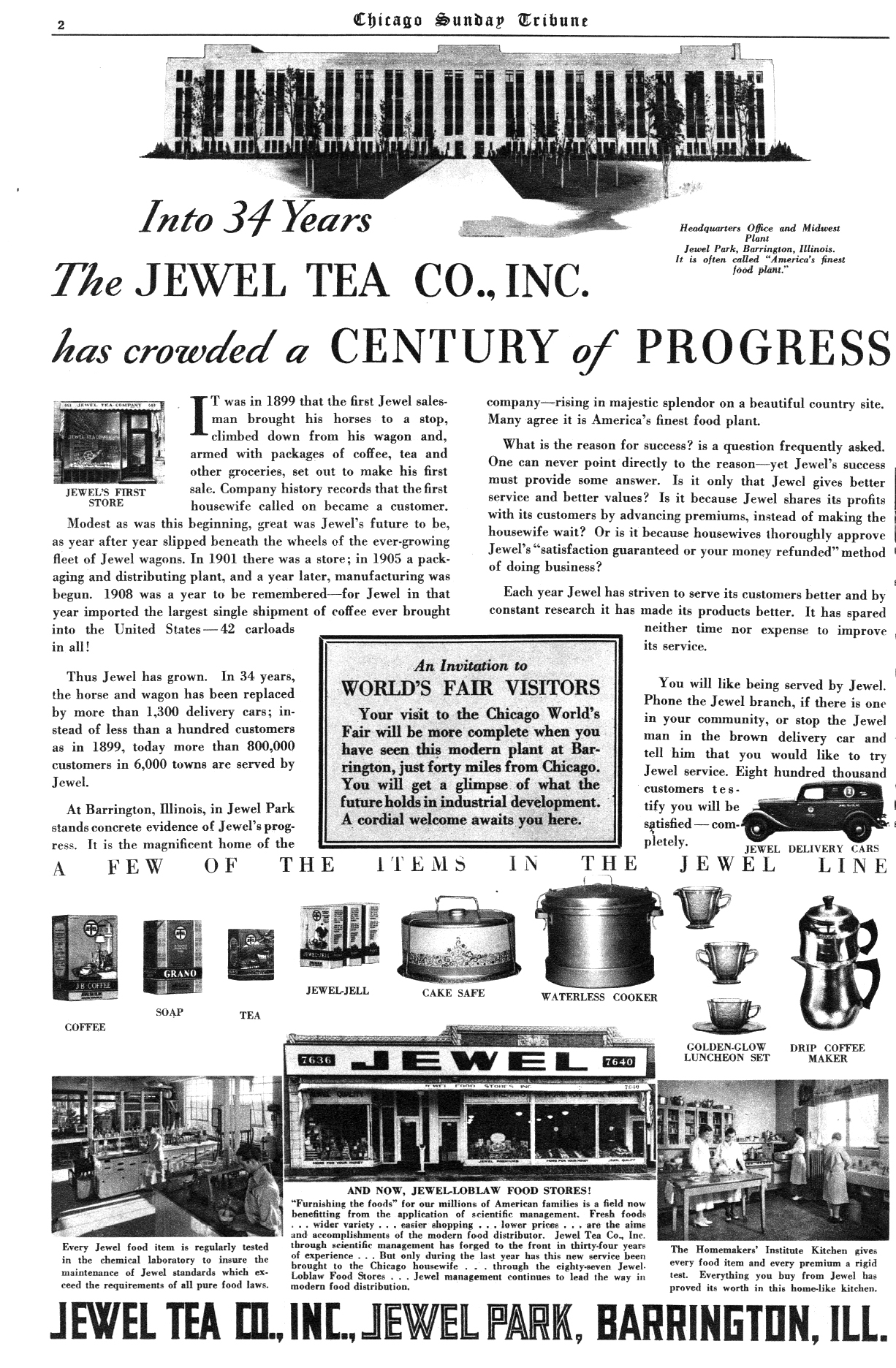 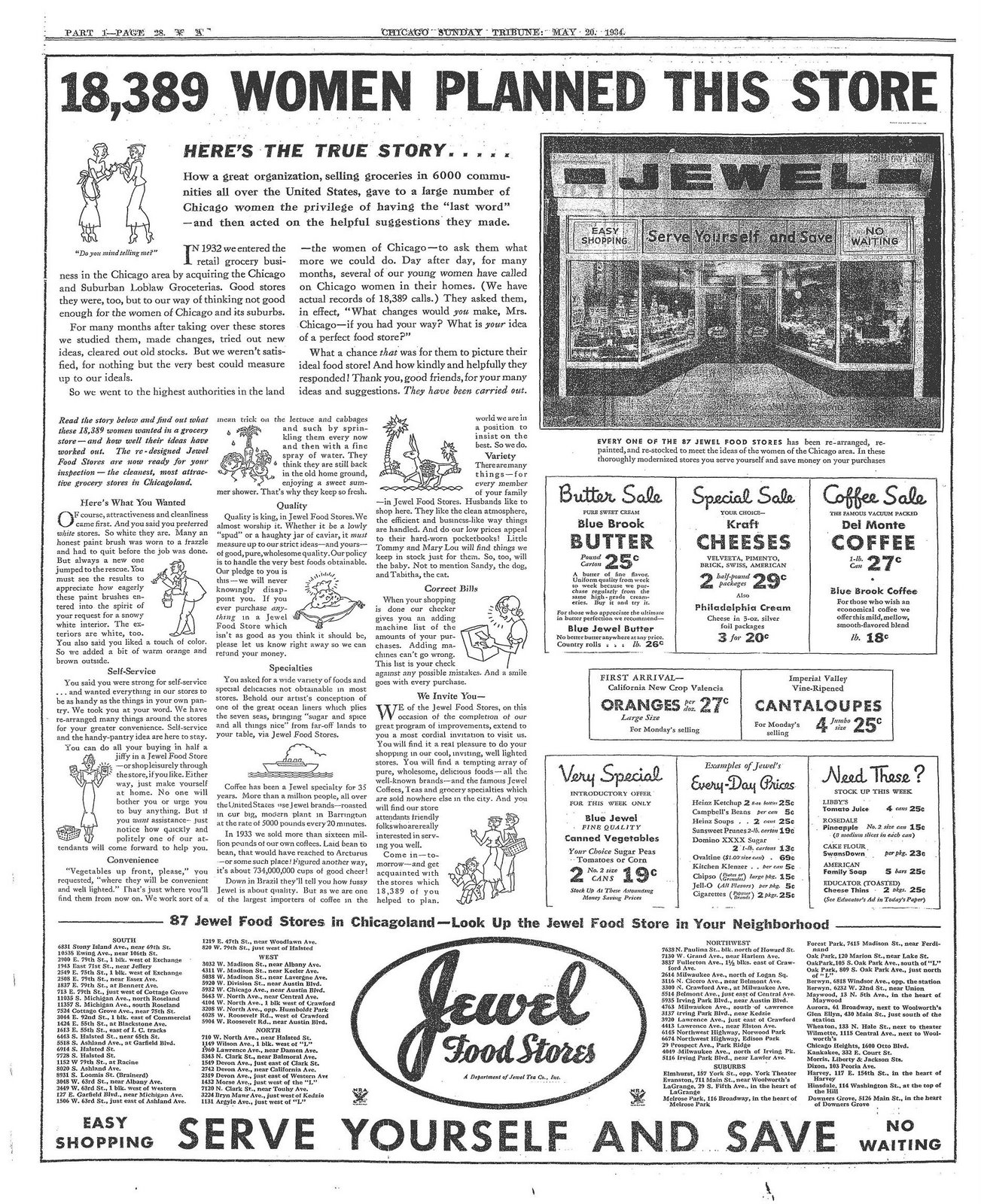 Jewel Tea company yesterday announced the acquisition of Osco Drug, Inc., self service drug store operator, and reported record sales and earnings in the 52 weeks ended Dec. 31. The acquisition was made thru an exchange of stock.

The acquisition of Osco, which operates 30 drug stores in Illinois, Indiana, Iowa, Minnesota, North Dakota and Wisconsin, represents a step toward further growth in self-service retailing. 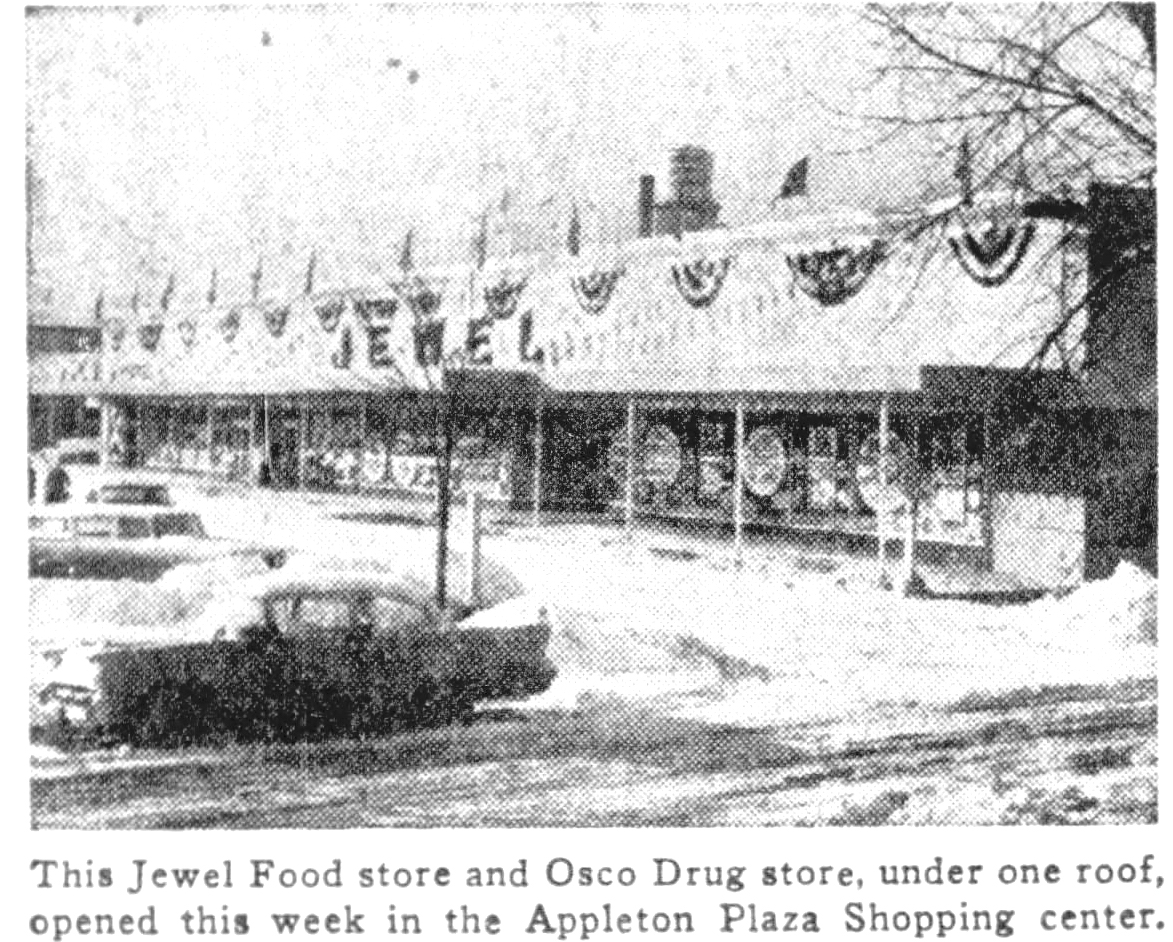 A Jewel Food store and Osco Drug store had their combined grand opening last Wednesday at the Appleton Plaza Shopping center, Wellington and Ashland avenues, following a gala open house preview for the neighborhood the night before.

The two stores, connected by a passageway between their checkout areas, offer customers, all under one roof, most of their everyday needs, plus a large variety of general merchandise. There is parking space for 250 cars.

The new Jewel store will have the first demonstration center ever to be provided in one of the chain’s supermarkets—a special area in which different demonstrations will be presented each week.

A Jewel kitchen department provides a full line of home-made salads and other prepared foods, including barbecued chickens and ribs, fresh baked pies, and carry-out sandwiches. This department also offers service of completely prepared menus for 40 to 4,000 persons and specializes in fancy hors d’oeuvres and snack trays.

Other Jewel features in the new store include an old fashioned sausage shop, and a Jewel pastry shop, with more than 100 varieties of specialty pastry and brread items from the company’s own bakery. The manager of the new Jewel store is Robert R. Hayes.

1This move to retail stores was a result of the “Green Rivers Ordnance” of 1932 which prohibited door-to-door solicitation. Under such an ordinance, it is illegal for any business to sell their items door-to-door without express prior permission from the household. Some versions prohibit all organizations, including non-profit charitable, political, and religious groups, from soliciting or canvassing any household that makes it clear, in writing, that it does not want such solicitations (generally with a “No Trespassing” or “No Solicitations” sign posted).

The ordinance is named for the city of Green River, Wyoming, which in 1931, was the first city to enact it. The ordinance was unsuccessfully challenged on constitutional grounds by the Fuller Brush Company in 1932.