The government lighthouse service has completed the installation of 240,000 candlepower navigation beacons and powerful fog horns on the 4 mile and the Carter Harrison cribs. The cost of tue project, required nine months to carry out, was $92,000.

The lights will officially go Into operation on Dec. 10, in time to aid the last of the freighters into winter quarters at the close of the season, according to Capt. C. H. Hubbard, commissioner of the 12th lighthouse district with headquarters at Milhwaukee. The purpose of the lights and fog signals, Capt. Hubbard said, is to furnish lake masters with an infallible system of guides to facilitate making the port of Chicago, as well as to direct the numerous ore carriers plying on the lake to South Chicago and Gary. 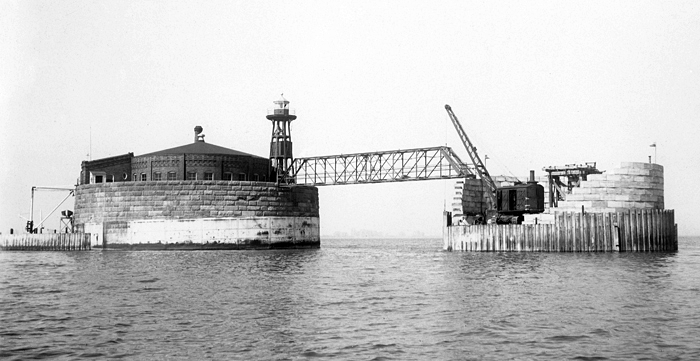 Have Remote Control.
The new apparatus is to be remotely controlled from the central Chicago harbor breakwater light station, near the entrance to the harbor. Fourteen miles of cable, weighing hundreds of tons, laid to carry electricity and control communications out into the lake. Never since the construction of the cribs have they had electric lights with the source of power on land.

The new beacons are so powerful that their beans are visible from 16 to 1R miles out in the lace in clear weather. They are double faced. rotating beacons, of the type used on the airways, and havo 36 inch red lenses.

New Horns Installed.
In foggy weather the 4 mile crib, which is off Roosevelt road, can be located by the latest type electric, air oscillating horn, operated by 4,000 volts of electricity vibrating a diaphragm 24 inches in diameter. A triple blast will be blown every minute. The Carter Harrison crib, which is two and one-half miles off North avenue, is already equipped with a three unit whistle, sounded by 200 pounds of air pressure blowing an 18 inch diaphragm. These fog horns can be heard from four to twelve miles, according to Capt. Hubbard.

The city of Chicago granted the use of the water cribs for the house service in exchange for their protection and the resultant aid to navigation, saving the government the cost of caissons. 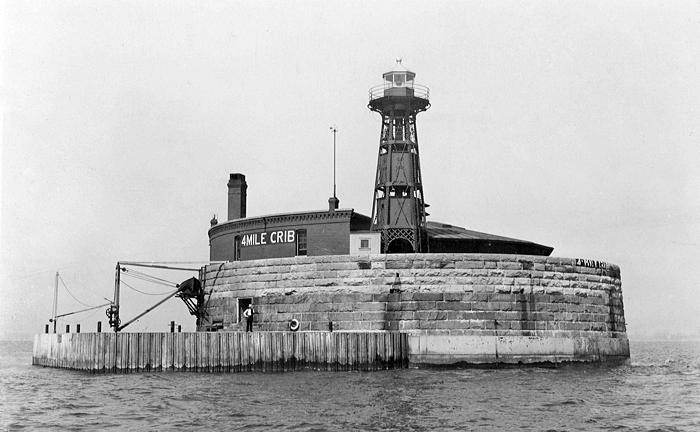 The four mile crib, off Chicago river, which is being connected by power cables With harbor breakwater light station.