The Chicago River and Its Bridges 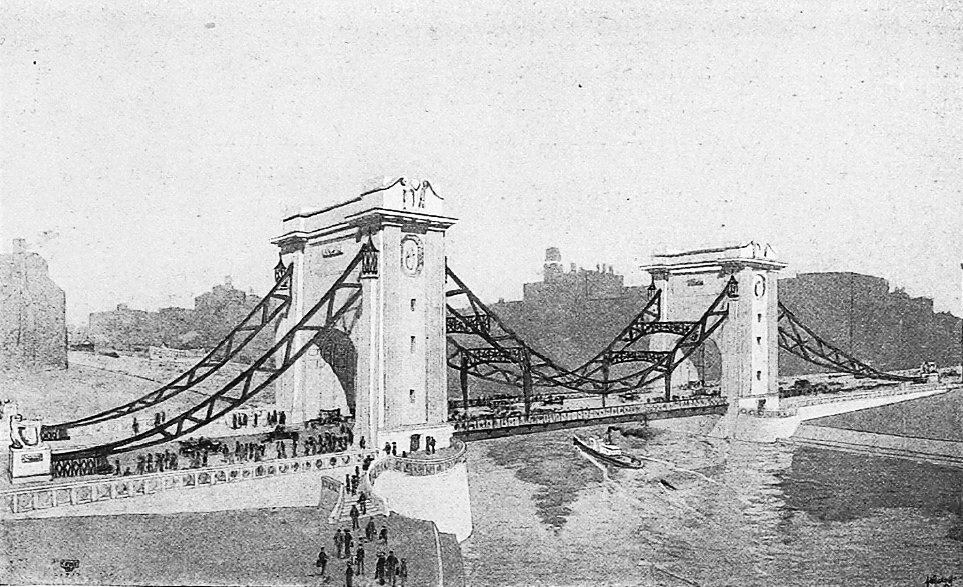 CHICAGO has a place among that favored group of cities which are distinguished by the coursing of a broad and deep stream through them. The Chicago River, although insignificant in comparison to many noted rivers of the world, is nevertheless a body of no mean importance. It is part and parcel of the history of Chicago and the development of the city is closely bound up with the past, present and future of this unique river, whose flow is now reversed from what was planned by nature.

The potential possibilities of the Chicago River in respect to commerce are unlimited. To anyone who has afforded himself the pleasure of a trip along its banks, on which stand many of the greatest plants of the country, the immense future open to Chicagoans through their river is instantly apparent. There will be no difficulty here, as there has been in New York, in finding berthing space for the great modern ships nor in meeting all the requirements of water traffic. Whether or not this future will become a reality is a question which Chicago now must face, and it is to be hoped that the spirit which has made the city great in other ways will not fail to real ize what boundless industrial strength this great artery can bring to the very heart of the community.

No less important than the river itself are the means which permit the full de velopment of its resources. A prime requisite of all navigable streams is such a system of bridges as will permit the free movement of navigation without material hindrance to the traffic on land. The Chicago River cuts practically every important line of city travel, and with the immense traffic which surges back and forth across an equally busy waterway, the development of the most efficient type of opening bridge becomes an absolute necessity. Chicago, therefore, has become the cradle of the modern bascule bridge and Chicago engi neers have given to the world a new science, which stands foremost in the art of bridge construction. 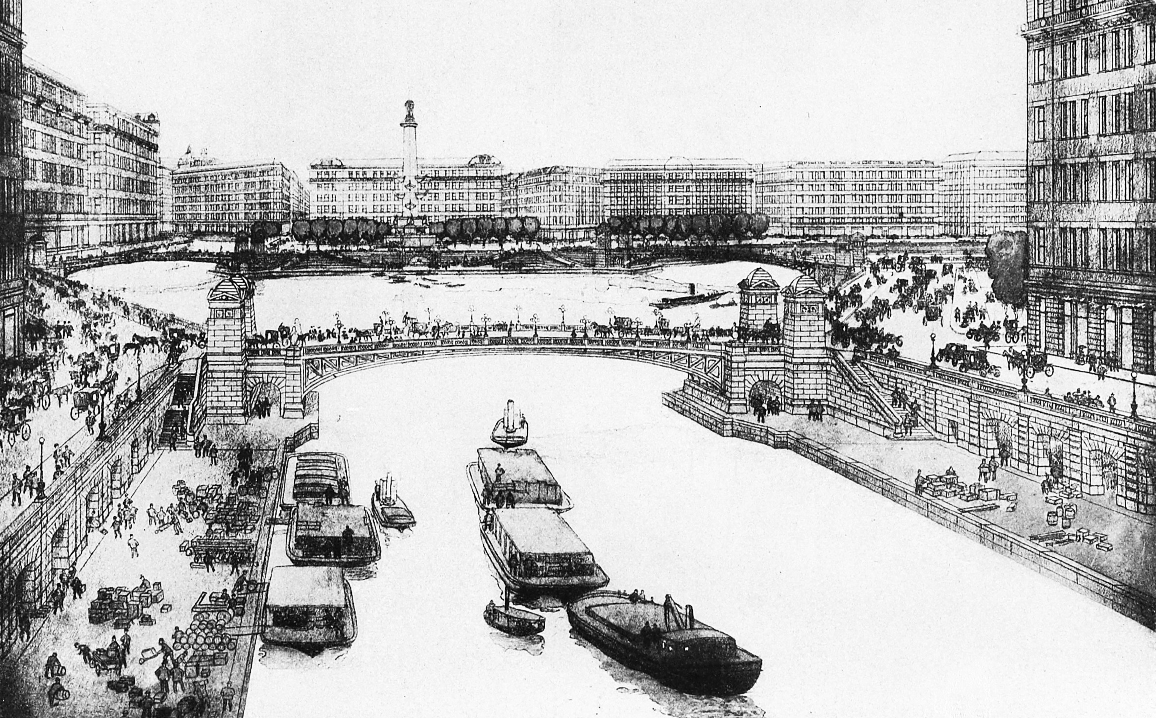 The first modern bascule bridge in the United States is still in service at Van Buren street. As compared with the bridges now being built across the river, this bridge is a mere toy. Not only has the span more than doubled, but the capacity and efficiency of the modern structures have also been wonderfully increased so that we now have across the Chicago River or its branches, single leaf spans of 235 feet, while at 16th street designs are being pre pared for a span of 265 feet. The immensity of these structures cannot be ex pressed in words, but it may convey some idea to the general reader if we state that the movement of one of the structures in volves setting in motion a total weight of 2,300 tons at an instant’s notice and the controlling of this huge mass with the ease that attends the control of an ordinary trolley car.

In recent years with the increased ef fort made to direct the development of the city along such lines as will please the eye, attention has been given to the molding of out bascule bridges on better lines. The aesthetic treatment of bridges, however, and particularly bascule bridges, is as yet a comparatively undeveloped art. The bridge engineer ordinarily is not an artist, while the average architect lacks sufficient knowledge of bridge construction to enable him to effectively treat a bridge structure. In consequence, aesthetic treatment thus far has been along certain prescribed lines which are adaptations from other fields of art and do not represent that free and in dependent treatment of the subject essen tial to full success.

It has, for instance, been considered that the only artistic form of movable bridge is a deck structure with the arched bottom chord and practically all the bridges on the Chicago River represent the carrying out of this theory. Nevertheless it cannot be said that any of the bridges on the Chicago River are entirely pleasing to the eye. Evidently, therefore, it requires something more than the flat decision that a bridge must be a deck structure or have a curved bottom chord to be an artistic structure and it is to be hoped that in conseqeence of the commendable program outlined by the Chicago Plan Commission a compre hensive study of the subject of artistic bridge design will be made.

Just how far, however, a bridge should be well-appearing is a question which admits of argument. Fundamentally a mov able bridge is a utilitarian structure strictly, built to do certain work and to do it most efficiently and economically. In reality a machine, the machine characteristics must predominate, as they do in other kindred mechanism. No one demands that a crane or an ore dock or similar devices be things of beauty and similarly the demand for a highly artistic movable bridge is often as uncalled for. 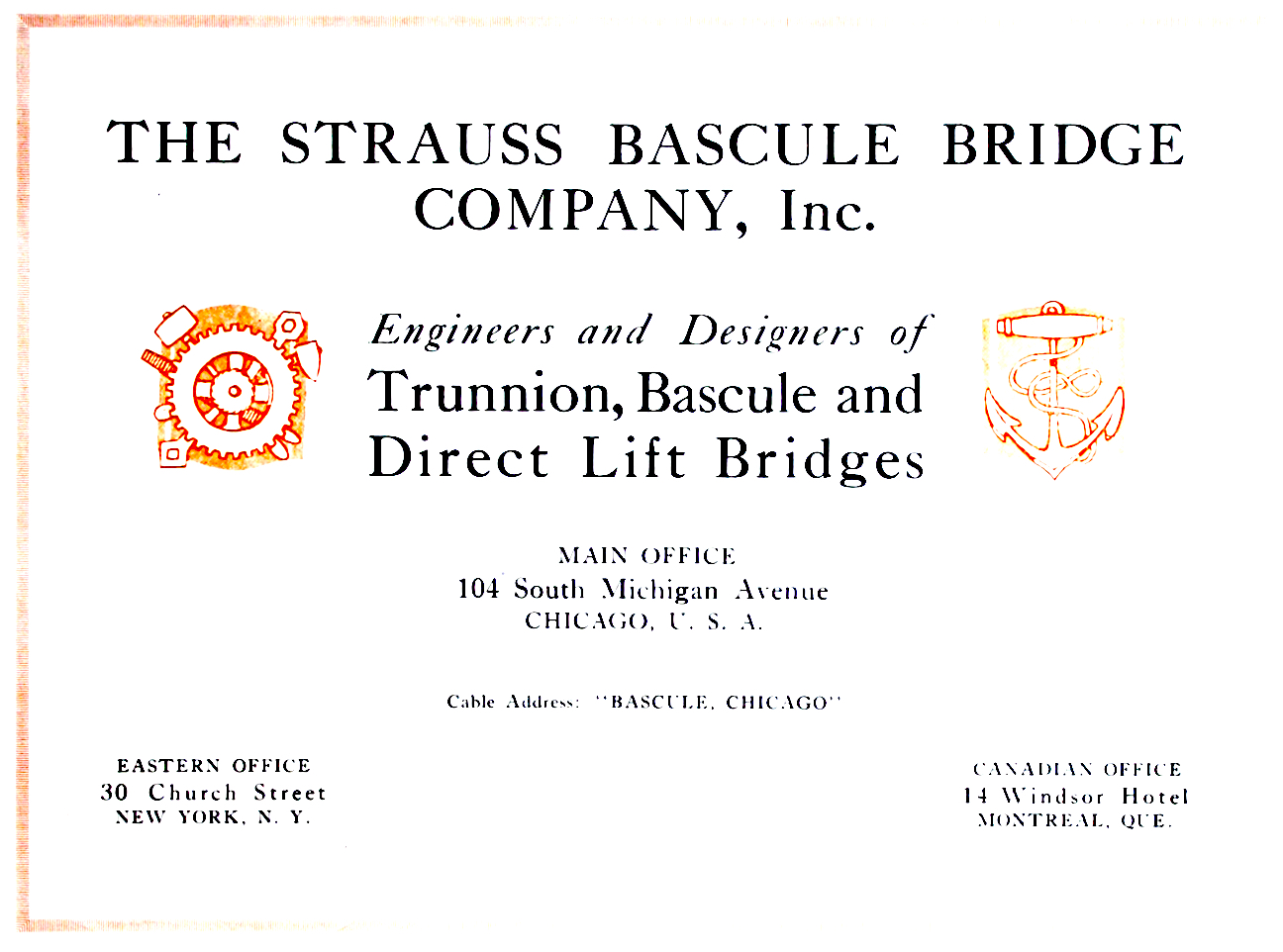 There are, however, locations where con ditions favor a graceful bridge, and such locations are found in the heart of such cities as do not confine their ideas of municipal beauty to bridges alone, but carryr them through all the public works of the city and even into the structures built by private individuals. Chicago is now ap parently making a sincere effort to “dress up” in general and consequently can consistently call, amonog other things, for artistic treatment of the movable bridges across the Chicago River. Certainly, however, this treatment should not represent the ideas of one school of architects or of one set of bridge engineers. The door should be thrown open to engineers and design ers generally so that Chicago may have the benefit of the best thought of those who are willing to give it, wherever they may be found.

The magnificenit bridge structures distributed all over the Old World should not be forgotten. Many of these are of surpassing, beauty without being limited to eitlher the clear deck constructioni or the arched bottom chord, which some here have coniceived as the first essential of an artistic structure. There are niumerous op portunities for bridge splendor in overhead trusses and monumnental towers, which we must recognize. We must not bind ourselves to set notions or narrow lines of thought or to prejudice and egotism if we are to erect structures which, while serving every purpose of commerce on water and traffic on land wvith maximum efficiency, will still be monuments which will be dignified and inspiringa and will adld to the comminiercial value of the Chicago River the additional asset of elegance.

Chicago still has opportunity to secure a utniformly satisfactory appearance of its downtown bridges since the majority of the structures crossing the river in the heart of the city are yet to be rebuilt. Some general plan however. must be agreed upon to produce this result. The planninig as already stated, should niot be a matter of in dividual preference so that each brirdge represents totally different ideas as to out line, as is the case in the Washington street bridge just completed and the Jackson street bridge about to be commnenced. With almost identical conditions and with in sight of each other, these two structures are as unlike as they well could be. There are some crossings of the Chicago River which require special and different treat ment, such as the proposed boulevard Link and I2th street bridges and these structures should not only differ from the otlhers but should be so different that they will be distinctive, taking their place among Chicago’s monuments. For the ordinary crossing. however, a simple general type should be adopted wNith modest architec tural treatment which will include not only the bridge structure proper but the approaches as wvell, and as already stated, in the development of this plan, opportunity slhould be given to all schools of art and to the best talent generally so that Chicago mayor immortalize not one particular engi neering administration but the best and noblest type of movable bridge 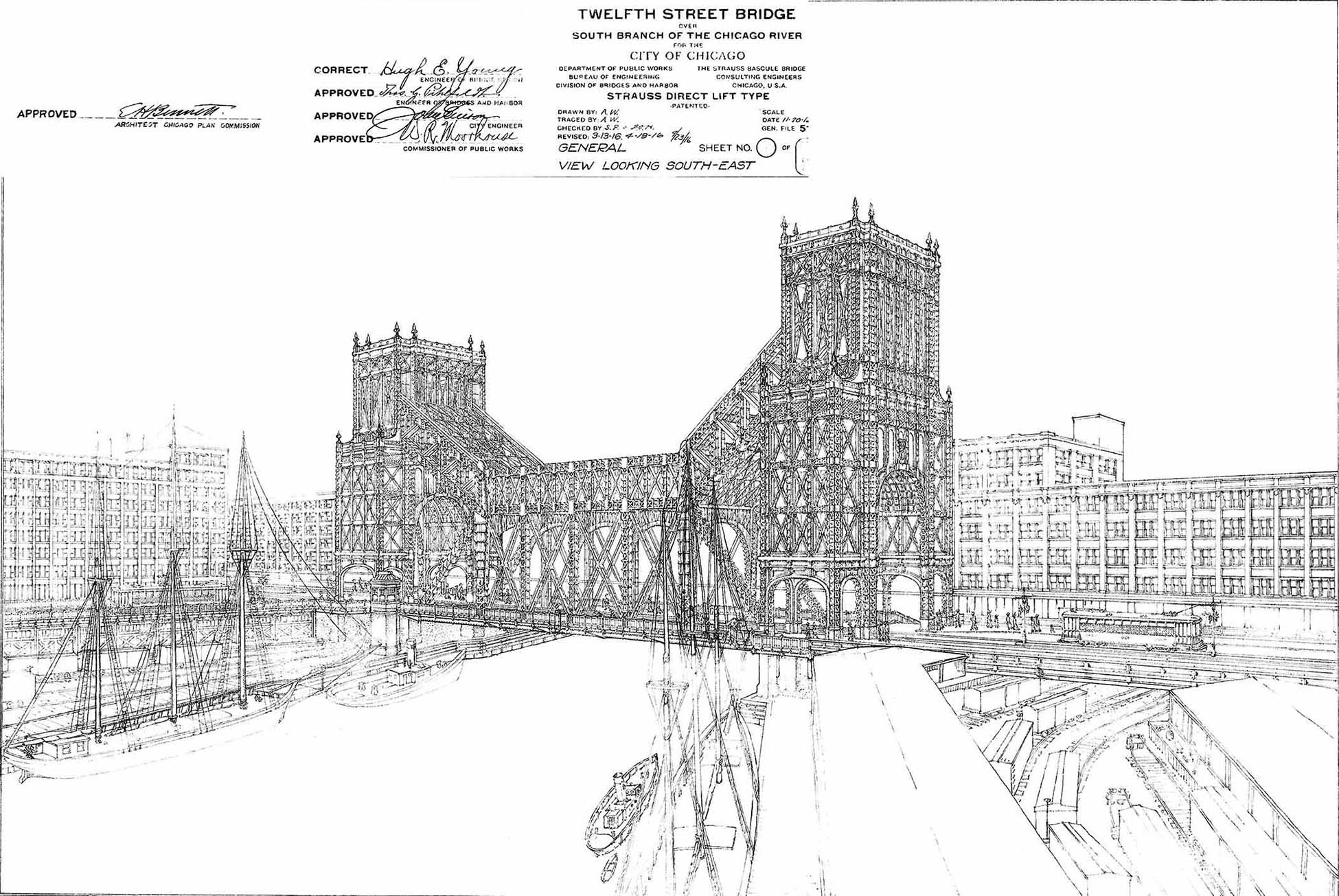 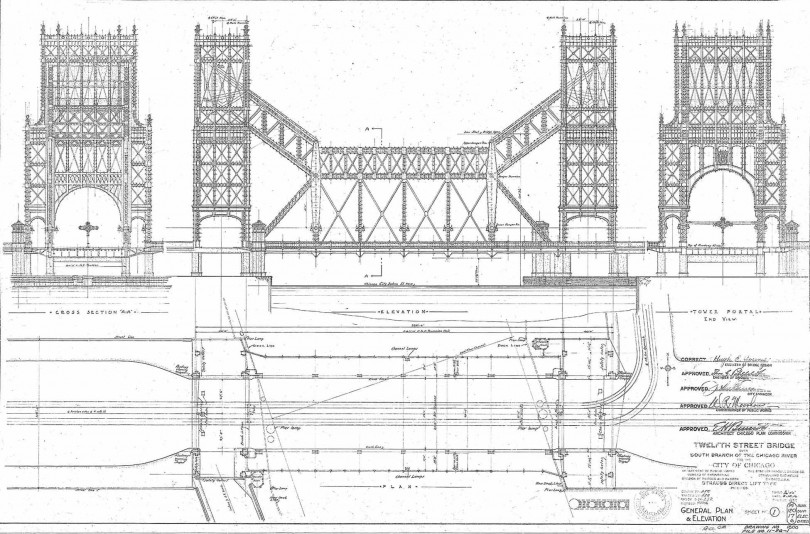