OUT of the north they come, Chicago’s Christmas trees, a million of them every year, and worth, at a minimum retail estimation, a million dollars. Not all these trees are used in Chicago, for Chicago, by reason of her position at the center of both rail and water transportation, necessarily supplies many of the neighboring towns. Enough of the trees are placed on sale in the city, however, to make their coming a very obvious event. One may be walking down the street ever so much engrossed in one’s own affairs and suddenly find himself in the midst of a veritable grove of pine and spruce and balsam trees, whose fragrance, spicy and resinous, reminds one more vividly than any thing else of Christmas.

It is said by those whose task it is to collect the Christmas trees for the Chicago market that always when the weather is colder than usual, when there is the greatest likelihood of a “white Christmas,” the demand for Christmas trees is greatest. It is as if the very deadness of the landscape, covered with the white pall of the snow, creates the keenest desire for the Christmas evergrens. 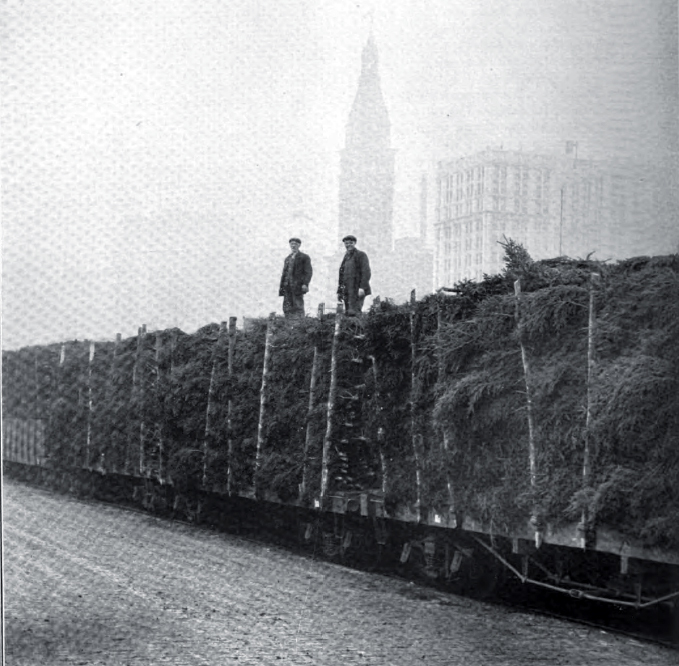 Arrival of Christmas Trees by the Thousands in Chicago Railway Yards.
A Typical Scene of the Holiday Season.

Long before the rest of the world has begun to think about Christmas, however, the hardy woodsmen must be busy in the north country selecting and cutting down the trees for Chicago’s Christmas celebrations. A great many of the trees still come from Michigan and the Lake Superior region, but every year the men are pushing farther and farther north into the pine forests of New England and even into the wilds of northeast Canada, some few trees coming also from the far west of the United States.

The increasing use of little Christmas trees for the table causes the cutting of thousands of tiny trees which sell for 25 or 50 cents at retail. The average eight-foot tree, selling for from one to two dollars, is cut in greatest quantity, and once in a while a real giant, from twenty-five to forty feet high, is cut for the use of churches and hotels with lofty ceilings. It has been a good Chicago custom for some years to erect a big Christmas tree on the Lake Front for the benefit of all, and particularly of the stranger within our gates.

One of the most picturesque ways of bringing the Christmas trees into Chicago was for many years via the old “Christmas ship.” This ship was a schooner, called the Rouse Simmons, owned by Captain H. Schuenemann, who every year would brave the rigors of the northern lakes, returning to the Chicago river with a cargo of Christmas trees. Chicago men and women, as well as children learned to look eagerly for the return of the “Christmas ship,” and then all at once, un heralded, there it would be in its place by the Clark street bridge, its tall masts and wide decks often white with snow and ice, against which the ever greens showed with a singularly beautiful effect for several days prior to Christmas. 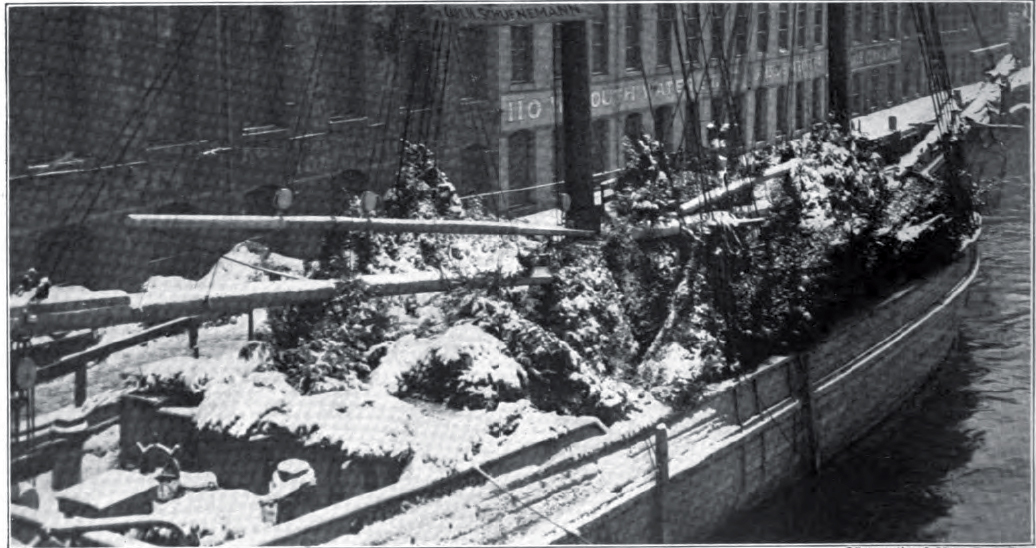 In loyalty to her husband’s purpose in life of providing the best of Christmas trees for Chicago, Mrs.Schuenemann took up the work after his death. Every year since, this brave sailor’s wife, now a white-haired woman of sixty, has gone up into the forests of northern Michigan and Wisconsin, personally selected her trees, and returned with them to Chicago. Owing to the scarcity of boats occasioned by the war, Mrs. Schuenemann has for a few years been obliged to give up the Christmas ship, but has brought her trees in by rail and sold them from a little shop in Clark Street. She sells at both wholesale and retail, and her trees are the choicest of spruce, balsam, cedar and Norway pine.

The great bulk of Christmas trees coming into Chicago are consigned to commission merchants on South Water Street, who, in turn, sell them to retail dealers throughout the city. They come in car-load lots at the depots serving the northern and eastern roads. There are about 500 bundles of the smaller sized trees to a carload, and the bundles average four trees each, varying the number with the size of the trees. The largest trees, those measuring from twenty-five to thirty feet, come in lots of two or three only on one flat car, and often there is a train-load of these fiat cars, bearing Christmas trees. One such load is nicely portrayed in the frontispiece of this issue, in the yards at the Lake Front. 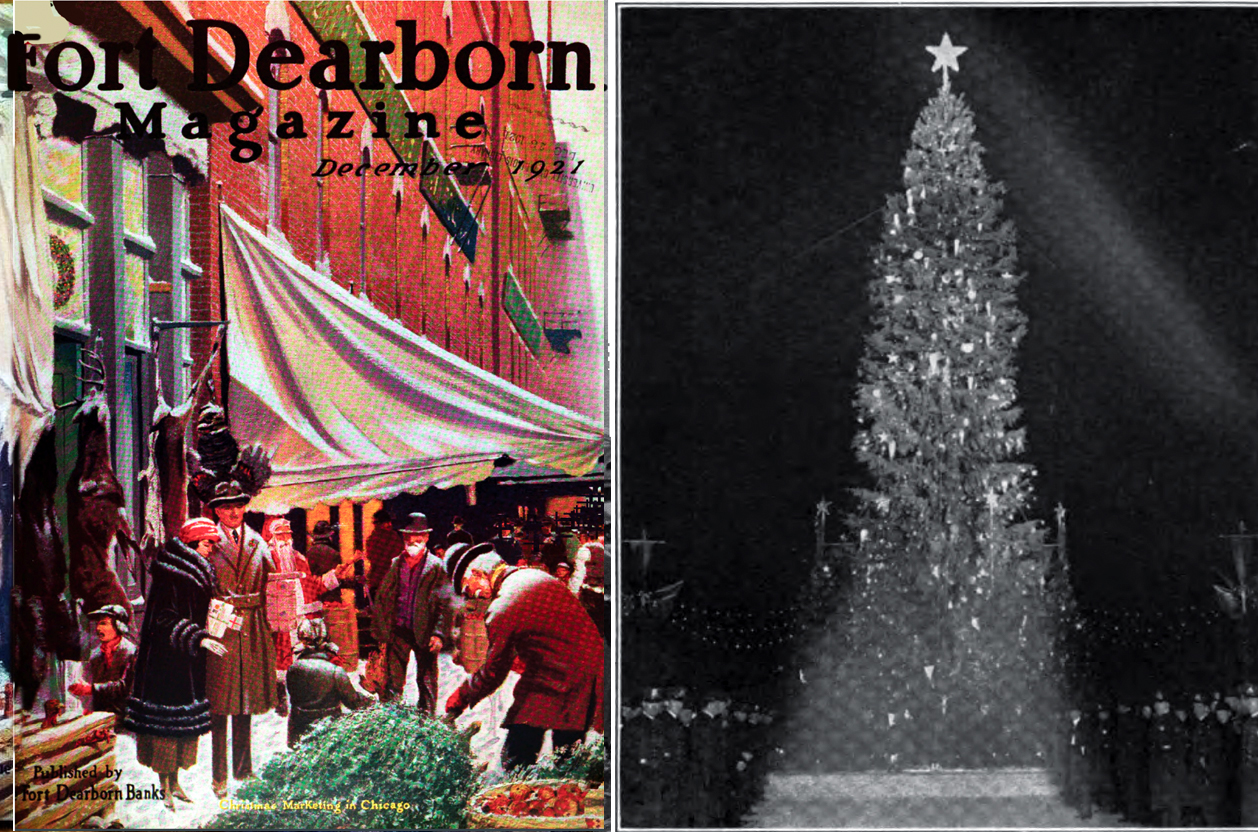 It is a pretty sight to see them come in at the depots all green and fresh in the midst of the general greyness and grime. By means of Chicago’s marvelous system of freight classification, these Christmas tree cars are immediately “spotted” for delivery on certain tracks and under certain numbers. With the least delay the commission merchants can go directly to these cars and take 05 their trees themselves, thus saving transfer and much damage to the trees.

A little after Thanksgiving, the Christmas trees begin to make their appearance on South Water Street and in adjoining shops. Also on this street—the world’s greatest produce market—are gathered all manner of game, fruits and vegetables from the far North, the South and the West, brought in for Chicago’s Christmas cheer.

Soon the up-town merchants come for their trees, and presently before every little grocery, market and florist’s shop the city over, one sees rows of pointed fir and spruce, with masses of holly all ready for the Christmas buyer. Even to tread the sidewalk in front of one of these little shops, sniffing the fragrance of the trees and crunching their scattered needles under foot, is to feel a thrill of joy, and the best of it all is that, if you imagine yourself too grownup to need a Christmas tree personally, you can always buy one for somebody else. 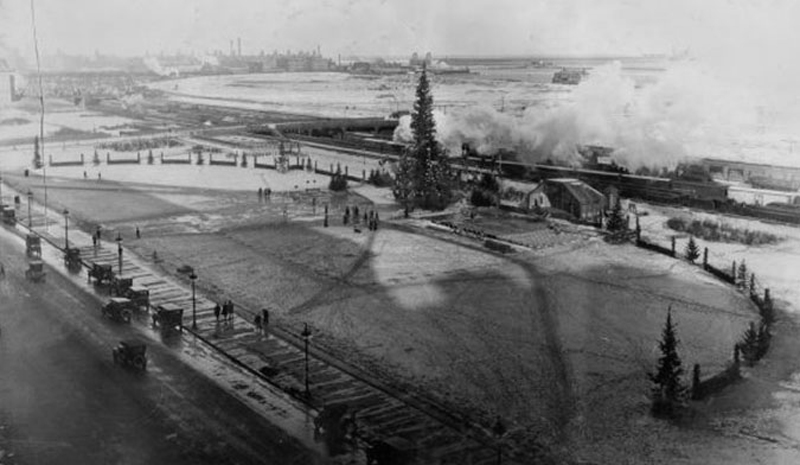