Samuel E. Gross, the prominent real estate promoter of this city, with main office at S. E. Cor. Dearborn and Randolph sts., is a native of the Keystone State, having been born at the mansion farm, Dauphin, Dauphin Co., Pa., November 11, 1843. In the autumn of 1866, he graduated from the Union Law College at Chicago, and was shortly afterward admitted to practice by the Supreme Conrt. About this period he made some real estate purchases and in 1867 built quite a number of houses. In 1868-69 he took an active part in the location and establishment of the park and boulevard system of this city. 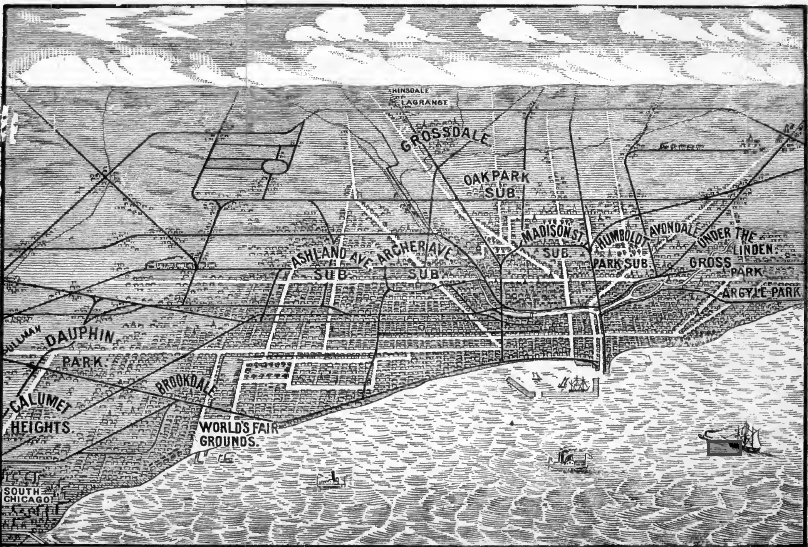 In the spring of 1886 he located the present suburban town of Brookdale and a year later founded the thriving suburban towns of Calumet Heights and Dauphin Park and also much improved and developed a tract of forty acres, corner Ashland ave. and Forty-seventh St., and upon which he built a number of handsome and commodious houses. In 1888 “Under the Linden” was established. In this year he also built up and developed a large territory in the vicinity of Humboldt Park, in addition building over 200 houses in the neighborhood of Archer ave. and Thirty-fifth st. In the following year he located and built the suburban town of “Grossdale” on the C., B.&Q. R. R. one mile west of Riverside, without a-doubt the finest suburban city on this railroad, possessing as it does a $5,000 brick and stone depot, a theatre and store building costing over $15,000, a large number of villa residences and ornamental streets, lined with immense elm trees, a grand boulevard eighty feet wide and over ¼ miles long, improved with brick sewers and macadamized roads, while having in addition a handsomely laid out park, ornamented with over 25,000 flowering plants and shrubs, with all the latest improvements of a thorough and ornamental description. Over 800 lots were sold during the first thirty days the property was in the market. During the past ten years Mr. Gross has sold over 40,000 lots, while he has built and sold over 7,000 houses, and located and built sixteen towns and cities. 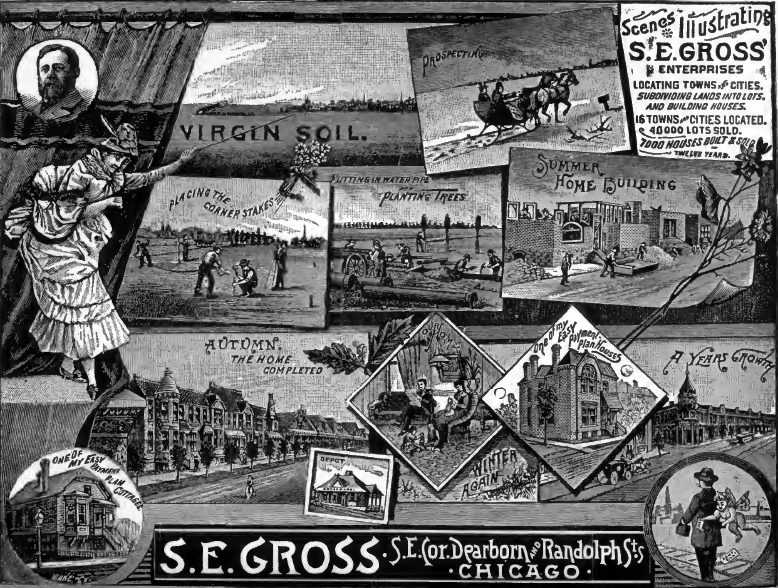 He is the proprietor of and controls the sale of over 150 subdivisions, additions and suburban towns, located in all divisions of the city and containing in the whole 24,000 lots. He is thus undoubtedly the greatest real estate promoter in this country. The first to inaugurate the “easy payment” system (in this city), in connection with real estate, the success of same has been remarkable, while the confidence placed in him is such that he is enabled to sell out a city subdivision or suburban town in as many months as others would require years to accomplish. He is a director of the Chemical National Bank, and is a member of the Chicago, Union, Marquette, Iroquois, Washington Park clubs, and also of the Art Institute and Humane Society. He has traveled extensively, not only in this country, but in Europe also, and while he has often been offered large inducements to duplicate his building and real estate enterprises in London, Rome, Naples and Mexico, he prefers confining his interests to this country. In the spring of 1889 he was nominated by the United Workingmen’s societies of this city as their candidate for mayor; his time, however, being so fully occupied, he declined this honor. In January, 1874, Mr. Gross was married to Miss Emily Brown (of English parentage), and possesses a beautiful residence on the Lake Shore Drive, Cor. Division st. The architect of his own fortunes, there are few -who are more prominent in this city, and few more esteemed and respected than he. 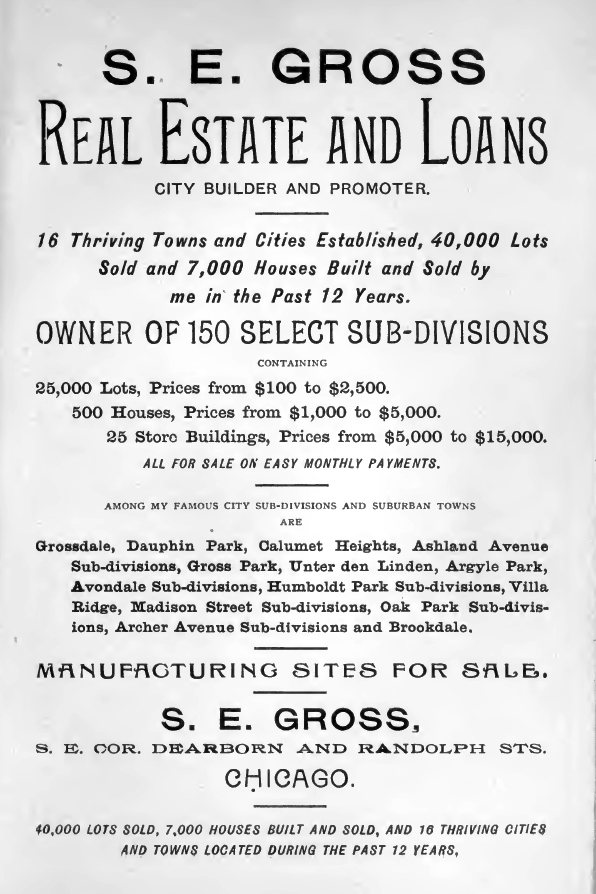 From The Standard Guide to Chicago by John J. Flinn, 1893

Residents voted to incorporate as the village of Grossdale in 1893. The name was changed in 1905 after residents became displeased with Gross, whose personal life and fortune had floundered. A contest to choose a new name yielded “Brookfield” in respect for Salt Creek, which runs through the area.

In 1893 a New Yorker, John Reid, toiled as a pioneer-style teamster, hauling lead from Chicago to Galena in his wagon. On a return trip one day, he came to the creek as it was nearing flood stage with salt as his load instead of lead. Reid got stuck in the mud halfway across, and the creek ran high with brine for quite a spell afterwards. It has been called “Salt Creek” ever since. 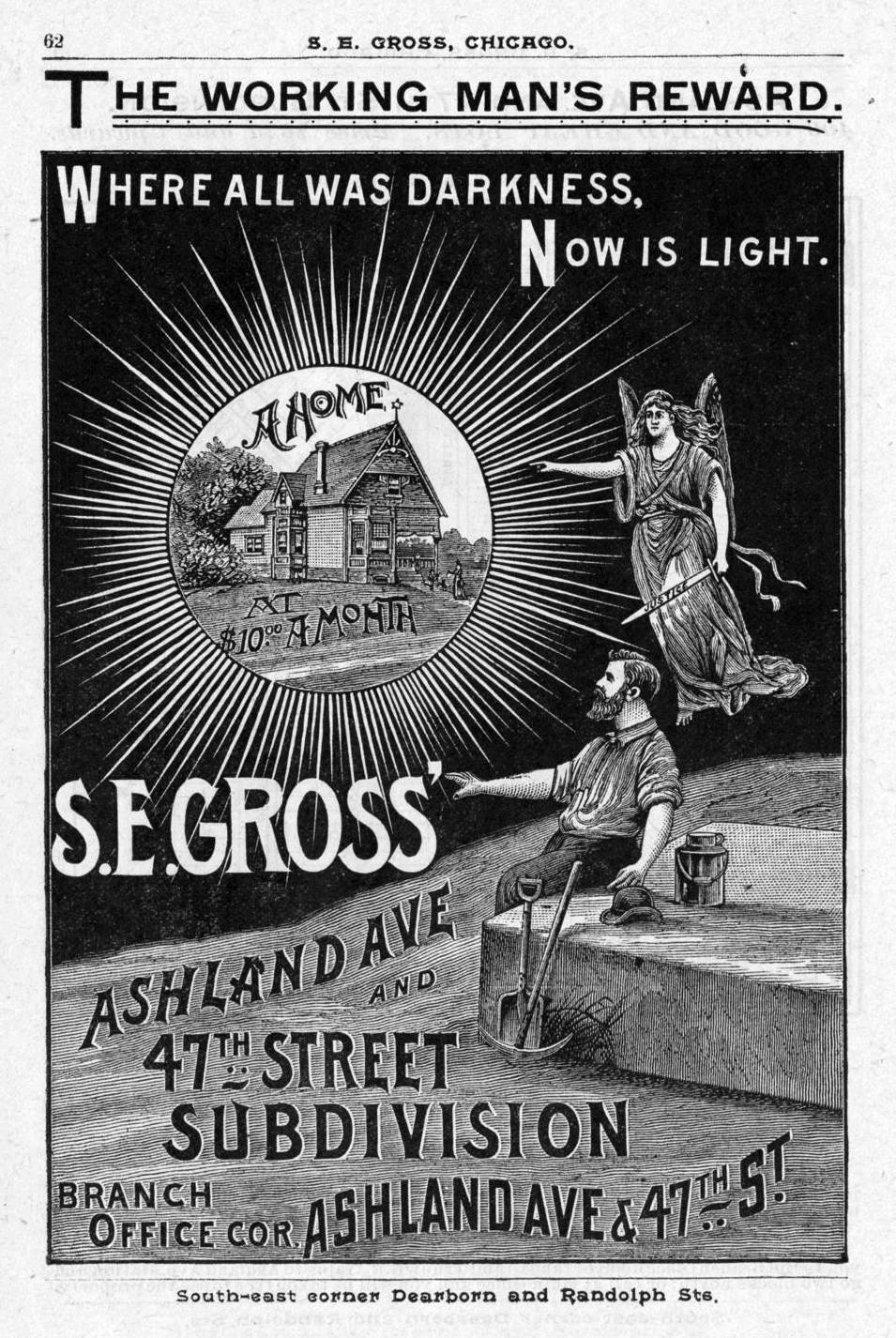 In 1891, developer Samuel Eberly Gross advertised houses in the shadow of Chicago’s stockyards as “The Working Man’s Reward”