THE TRAVELING GARBAGE BURNER OF CHICAGO.

The disposal of garbage and other refuse from the household is the most serious hygienic question that municipal governments have to deal with, as the health of a city depends to a large extent upon the efficiency of the street cleaning department. The most common method of remo ving garbage is by means of carts that go from house to house gathering whatever refuse there may be until the wagon is loaded, then through the streets with the foul-smelling and disease-breeding load to a distant dump, which, in cities on the sea coast, may be a scow, but which in most cities is more liable to mean a depression in the ground, which is filled with this putrid matter and left to contaminate the whole region.

An effectual way to dispose of garbage is to burn it, and this can be accomplish ed either by the use of stationary or by porta ble crematories. One great hindrance to a satisfactory and economic system of collecting and destroying it is the fact that to the garbage are added ashes, old shoes, bottles, tin cans, paper and household refuse of an kinds.

The city of Chicago has taken hold of this matter with much vigor and has tried both stationary and portable crematories. Superintendent Welles, of the street cleaning department, was not satisfied with the
results obtai ned ; so devised a crematory of his own, which is shown in ?he accompanying illustration, as it appears in actual work in an alley way on the west side of Chicago. It is a very simple affa ir and made solely for service, all regard for appearance being thrown
aside. This crematory has produced decidedly satisfactory results, and Mr. Welles regards it as the most successful Olle that has yet been produced, all things considered.

The crematory weighs 7, 700 pounds and is drawn by a pair of horses. It comprises a cylinder eight feet long and four feet in diameter, made of ordinary boiler iron covered with abestos. A tall smokestack in front completes it, the whole being mounted on wheels. The general appearance of the cre matory is not much unlike a traction engine. The cylinder is divided longitudinally into three compartments, two of which can be seen in the illustration, half of the double door to each being open. The upper compartment is the furnace proper and the lower one is the ash pit. In the forward part of th e cylinder is a third compartment, the grate of which is inclined toward the front end. 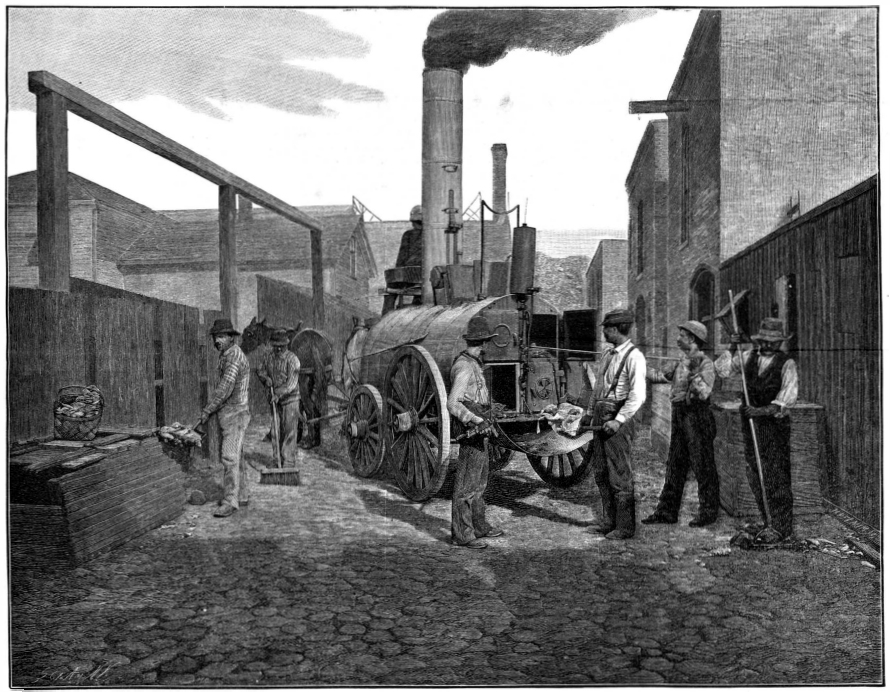 THE TRAVELING GARBAGE BURNER OF CHICAGO

On the top is a receiving box into which the garbage is thrown and where it is subjected to sufficient heat to drive out most of its moisture. When the box is filled a rod attached to the sliding bottom is pulled out and the contents dropped into the furnace, where the intense heat incinerates it instantly. While this burning process is going on an attendant pushes the burning mass into a forward compartment, which contains an inclined grate, in order to keep the consuming capacity of the furnace up to its highest mark. The fire is maintained by the use of crude petroleum. Two cans designed to hold this fuel are used ; one is on the rear end, immediately over the furnace doors, and the other is forward. The flow of this fuel is easily regulated by a stopcock, so that if the fire becomes low it can be enkindled almost instantly, making the crematory a roaring furnace. Frequently, when in operation, the smokestack reaches a white heat, so intense is the heat generated. The capacity of this furnace is enormous, and ordinary garbage disappears in it like
paper.

Only the garbage proper is fed into the receiving box on the top. All paper and other light, inflammable material is fed into the rear door immediately into the fire. One man is represented in the illustration as about to throw a shovelful of paper into the furnace, while another has just removed a shovelful of garbage from the garbage box, preparatory to throwing it into the receiving box. The man at the right with the rake in his hands assists in separating ashes from the
garbage proper, and rakes up into piles whatever cannot be burned ready for the wagon that follows the crematory to gather up. Most of the alleyways in Chicago are paved with wooden blocks, and, in order to prevent any danger of their being set on fire from hot coals, a sheet iron apron, as shown in the picture, is stretched under the furnace door to gather all falling embers.

The crematory is followed by a wagon which gathers up ashes, bottles, tin cans, and other refuse that cannot be consumed. Four or five times in the course of a day the ashes are drawn from the crematory in order to give it good draught, but this little residuum takes a very small fraction of the space that the burned garbage occupied, and all disease-breeding germs are consumed. The ordinary day’s work of this traveling crematory, and the two refuse carts which follow it, is twenty-three blocks, although there have been occasions when thirty blocks have been covered. This means a large amount of work in a city like Chicago, where in most instances eight blocks equal a mile. When the crematory and tender have been through an alleyway the transformation is surprising, as the place has been cleaned of disease-breeding refuse and other litter. It is estimated that this outfit of traveling crematory and wagon will take the place of fifteen to twenty ordinary garbage wagons, and it has a special advantage over them in that everything subject to decay is burned on the spot where it is gathered and foul odors are not stirred up and carried through busy streets, risking the spread of disease. Whatever noxious gases arise from the smokestack are soon dissipated, and the crematory, after disposing of the garbage on one block, moves along to the next, so that there is not a constant stream of such gases being poured out from one source as would be the case in a stationary furnace.

No comparison of this system of disposing of garbage over the garbage cart system has been made to a sufficient extent to admit of giving any definite figures, but enough has been learned to lead the street cleaning department of Chicago to believe that the portable crematory is vastly more efficient than anything that has yet been attempted in that city and is less expensive. It is estimated the cost of the crematory and men to manage it and two teams to remove the ashes and other refuse is less than $20 a day.