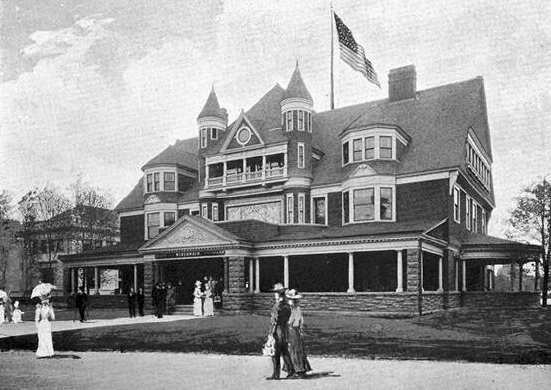 Wisconsin’s building, with its high, abrupt roofs, turrets, and dormer windows, its body of pressed brick and brown sandstone, resembles rather the home of one of her substantial citizens than a structure intended for public use. Standing on a semi-circular plat of ground, its main front near the lagoon, with Michigan, Indiana, and Ohio for immediate neighbors, it differs from most of the others in that no staff is used in its construction, all the materials being of domestic production. Walls and ceilings are finished in polished oak, cherry, bird’s-eye maple, elm, butternut, birch, and other woods from Chippewa country, the wainscoting of the first floor being especially elaborate. Most of the panelling is also in hardwood, and the reception room or lobby, which occupies the entire ground floor, is paved with tiles made of Wisconsin clay by Wisconsin manufacturers. This chamber is divided into three compartments by spandrels of oak, on one of which is the coat-of-arms. The furniture is chiefly of rattan, of the pattern seen at hotels and summer resorts.

Among the pictures are several loaned by General Fairchild, when minister to Spain, including portraits of Columbus and his descendant, the duke of Veragua, of ex-Senator Doolittle and his wife, and of S. Fillmore Bennett. In the reception rooms for men and women are also works of art. From the watchword of the state, “Forward,” Jean Pond Miner, a Wisconsin sculptress, has taken the theme for a marble group executed with singular delicacy and yet with sufficient boldness. In the prow of a boat stands a female figure, one hand uplifted, the other grasping an American flag, the pose suggestive of eager expectation and strength of will. The drapery seems to be carried backward by the wind, as if the craft were approaching land, the eagle which stands on the bow of the boat being recognized as the famous bird, Old Abe, which accompanied its regiment throughout the civil war. Among other works of note are “The Genius of Wisconsin,” a quiet composition in marble by Nellie Mears, also a resident of the badger state. Features which largely partake of the artistic are the three handsome fireplaces on the ground floor, and the carved stairway of white oak leading to the chambers above. Midway is a window of stained Venetian glass, a contribution from the city of Superior, and at the head of the staircase are decorated glass panels overlooking the balcony without. On the second story are the rooms occupied by the state board, of which A. L. Smith is president, with an art loan collection, and the exhibit of the State Historical society, including works by Wisconsin authors and a bibliography of writers either native to the state or those who have made their reputation therein. 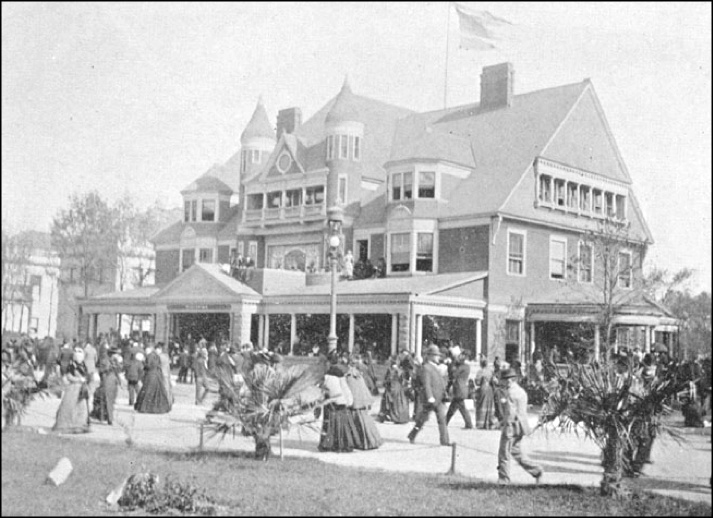 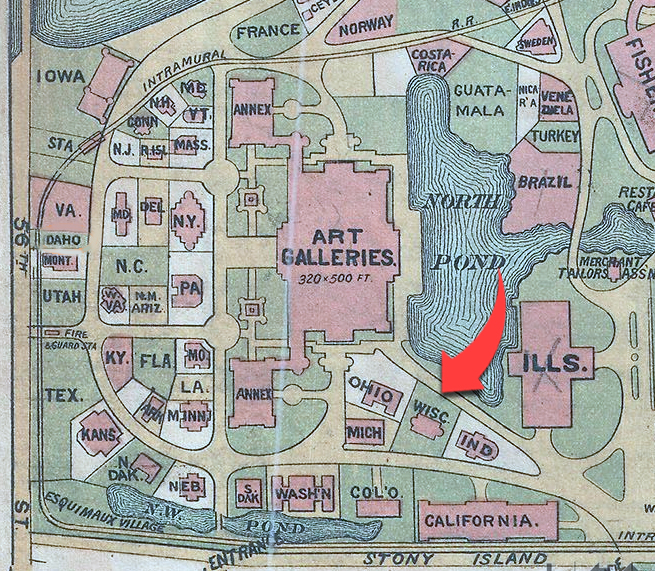