The design of the Arkansas Building follows classic models, it being in the French “Rococo” style of architecture, as Arkansas was originally settled by the French. The exterior is in plaster and ornamental staff work, tinted in light color. The interior is tinted, and the ornamental work is brought out in gold. The building has a ground area of 66 by 92 feet. From a large circular veranda, which runs the width of the building, an elliptical entrance opens to the rotunda, 30 by 30 feet, lighted by a central dome. In the center of the rotunda is a fountain of Hot Springs crystals, lighted by electricity. Flanking the rotunda are six rooms, 15 feet square. Five of these are used as exhibit rooms, with the registry room on the right of the entrance lobby. Opening from the rotunda, by triple arches, is the hallway, 11 by 55 feet, with the stairways on each side of the arched entrance. At the rear of the building is the assembly hall, 25 by 65 feet, which is entered from the hallway through triple arches. In this hall, opposite the entrance, is a 10-foot mantel, of Arkansas white onyx. Columns and vases of the same material are placed in various parts of the building. On the second floor are parlors for men and women, a library, committee and officers’ rooms. All of these rooms open on a broad gallery, over the rotunda, lighted from the central dome. Designer, Mrs. Jean Douglas, of Little Rock; cost $18,000. The exhibits made by Arkansas are to be found in the State building 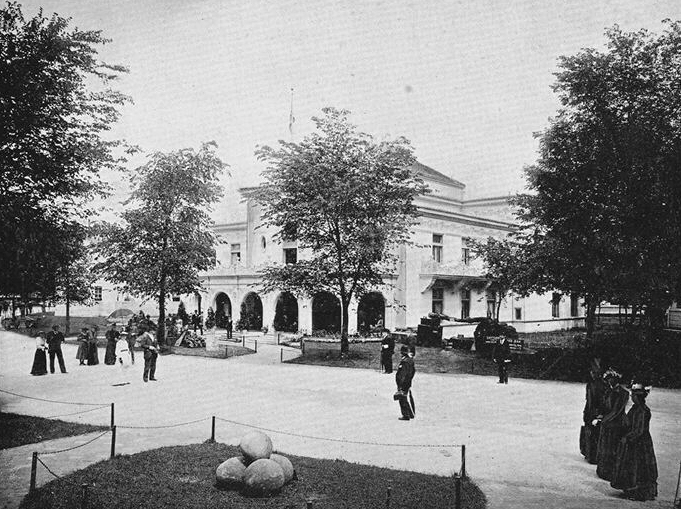 Just to the north is the special building erected by Arkansas, which is constructed in the French style of architecture. The building measures ninety-two feet deep by sixty-six feet wide. The main entrance is through an elaborate circular veranda, with granite steps leading up to it, which were cut at the Little Rock quarries. From this a triple arcade leads into the rotunda, which extends the entire height of the building, rising to a square dome thirty feet in diameter. One of the most interesting features of the building is a fountain which stands under the dome, and was donated by the ladies of Hot Springs.

The basin is ten feet in diameter, and from a granite foundation in the centre of it rises the figure of a boy, holding over his head a passion flower, the emblem of the State. Hot Springs crystals are grouped around the base,while others cover the petals of the flower. Aquatic plants are placed at the corners of the basin. This feature was designed by Mrs. P. H.Ellsworth, of Hot Springs, and when illuminated by electric lights is very attractive. The three rooms, fifteen feet square, on either side of the rotunda, are used as ladies’ reception and exhibit rooms, while the large one in the rear, 25 by 65 feet, extends the width of the building, and is devoted to general exhibits, Triple arches span it, and one of its handsomest decorations is a mantel twelve feet long, made of Arkansas white onyx. In the second story a broad gallery encircles the hall, affording entrance to six rooms, each fifteen feet square. The first floor of the building is laid in clear Arkansas pine, donated by the various lumber companies of the State. The architect of this building was Mrs. Frank Middleton Douglas. She was given the prize for the design over all competitors, and was also superintendent of construction of the building. 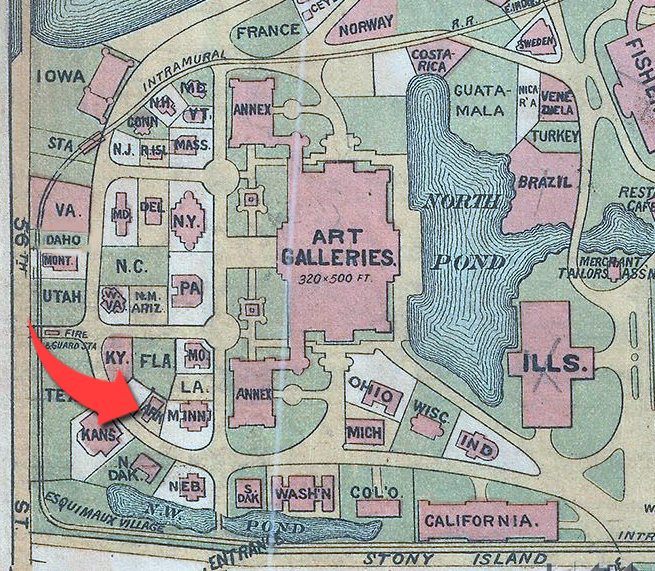