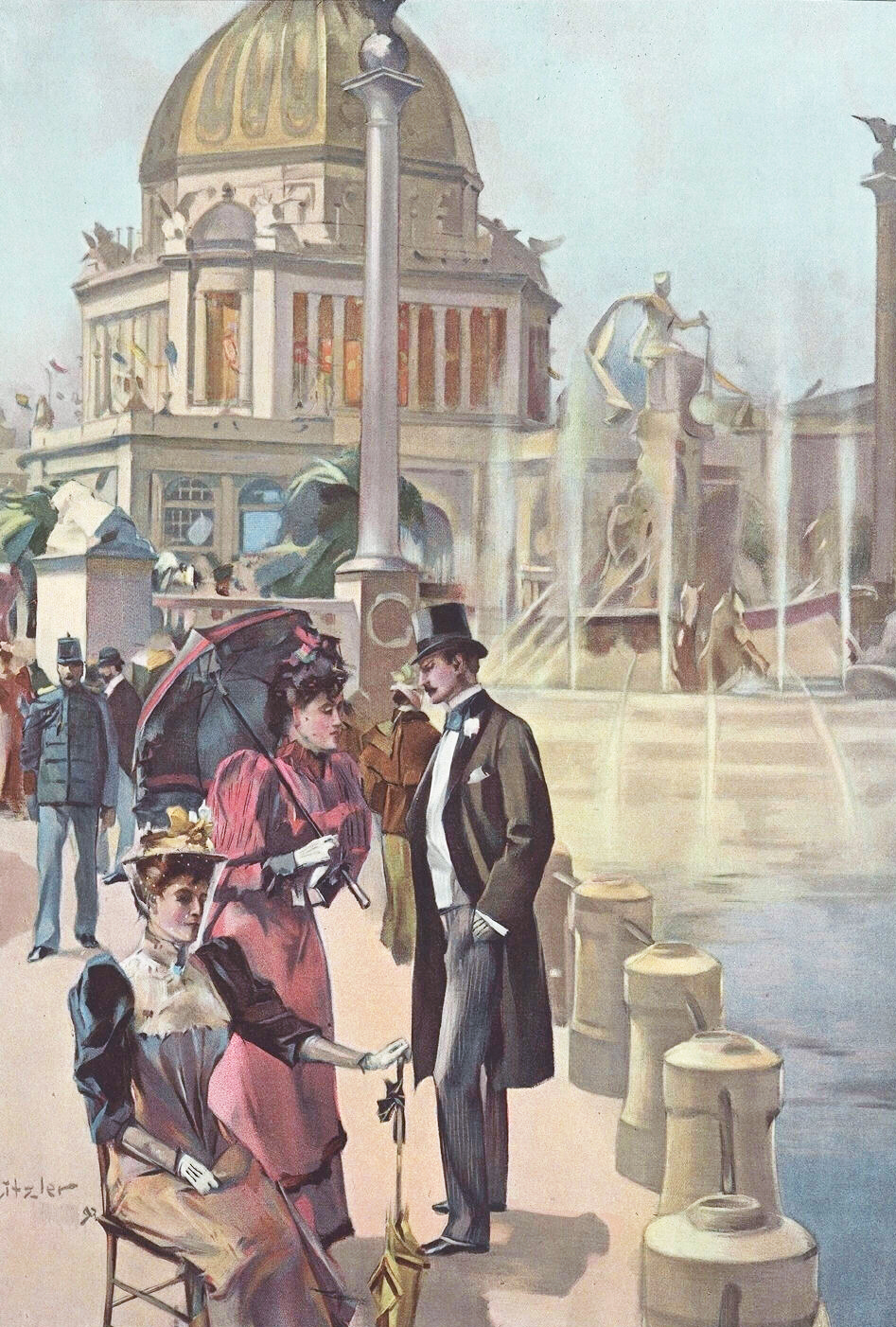 “The designing and construction of the Administration Building – which may be said to be the Capitol of the White City – was entrusted to one of the eldest and most distinguished of American architects, Mr. Richard M. Hunt, of New York. Its central position, its size, and the height and beauty of its gilded dome render it one of the most prominent and important buildings of the Exposition. It is in the form of four pavilions, 84 feet square, one at each of the four angles of the square of the planes, and connected by a great central dome, 120 feet in diameter and 250 feet high. In the centre of each facade is a recess, 32 feet wide, within which is a grand entrance to the building. The first story is of the Doric order, of heroic proportions, and crowned by a lofty balustrade; at the angles of each pavilion, and also on the story above, at the base of the dome, the piers are crowned with groups of sculpture, from the designs of Mr. Carl Bitter. The second stage, or story, of the building, of the same height as the first, 65 feet, is a continuation of the central rotunda, 175 feet square, surrounded on all sides by an open colonnade, 20 feet wide and 40 feet hight, with columns four feet in diameter. The third stage consists of the base of the great dome, 30 feet in height, and the dome itself, which rises in graceful lines and is richly ornamented with moulded ribs and sculptured panels. It is covered with aluminum bronze. Rising at the head of the great basin, opposite the eastern entrance of this building, is the monumental fountain executed by Frederick Macmonnies, representing the triumphal barge of “America,” steered by Time, heralded by Fame, and rowed by eight standing figures representing on one side the Arts, and on the other, Science, Industry, Agriculture and Commerce. The barge is preceded by rearing sea-horses, mounted by sturdy youths, and surrounded by a system of jets of water – some of them springing from a great half circle of dolphins in the rear – which almost conceal it an the youthful figure of America who sits enthroned on high. On each side rise columns surmounted by eagles, and at night the whole is brilliantly illuminated by the great electric fountains, one on each side of this monumental group.”