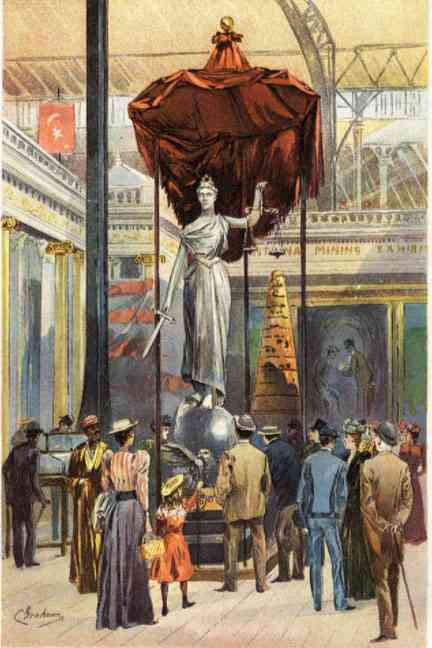 The lobby of the Montana building was twenty-two-feet square, and supported a glass dome which was thirty-eight feet high. Under this dome, on eight panels of pine, were recorded the principal historical events in the records of the people of Montana. A gallery displayed exhibits that had been displayed in the State’s pavilions elsewhere on the grounds. Here, the painters of the commonwealth and other Western States displayed their art along with mineral showings appropriate for Montana.

Whether the Silver Statue was located in the Montana building is uncertain. Another statue, the Silver Queen, representing a mining company at Aspen, Colorado was housed in the western gallery of the Mines and Mining Building. It consisted of pedestals on which infantile figures in solid silver poured cornucopias of silver dollars out on the world. and held the lines of a boat with chariot wheels, in which , under a canopy, with staff of office in hand, sat the Silver Queen, with crown of gold. Above her head was a richly made canopy, and on its summit rested an eagle with wings spread. It was considered to be, at the least, as beautiful as the Montana statue.