IT is proposed that the French people shall erect a monument in Jackson Park to commemorate both the World’s Fair and the friendship between the two countries. Like the statue by Bartholdl in New York harbor and the monuments to Washington and Lafayette in Paris, they are to be built by private subscription.

A design for the monument has been approved, the first medal having been awarded by the Paris salon of 1300 to Désiré Despradelle, professor of architecture at the Massachusetts Institute of Technology. Boston.

His design is for a monument 1,500 feet high, to be The Beacon of Progress.1

When Mr. Despradelle visited the United States for the first time in 1893 he proceeded directly to Chicago, where he was struck by the splendors of the exposition.

The impression of the White City so boldly erected on the shores of Lake Michigan haunted the artist. It seemed to him the exposition should not pass without leaving some trace, and the idea of commemorating it was born. He immediately began to conceive the idea of a monument as a souvenir of the Chicago Exposition, which, after some months, resolved itself, as he said:

Into the expression of a still more comprehensive thought assuming a national character, to fix at once the souvenir of the vanished White City, as well as the glorification of a great people. All the forces which have shaped the American nation marshaled themselves in the form of a glorious monument, the symbol of progress and grandeur. The history of Rome was inscribed upon Trojan’s column, that of America should be written at the base of a column 1,600 feet in height—the Beacon of Progress. So a monument typifying the apotheosis of American civilization should be erected on the site of the World’s Fair at Chicago.

DÉSIRÉ DESPRADELLE’S DESIGN FOR A MONUMENT ON THE SITE OF THE WORLD’S FAIR. 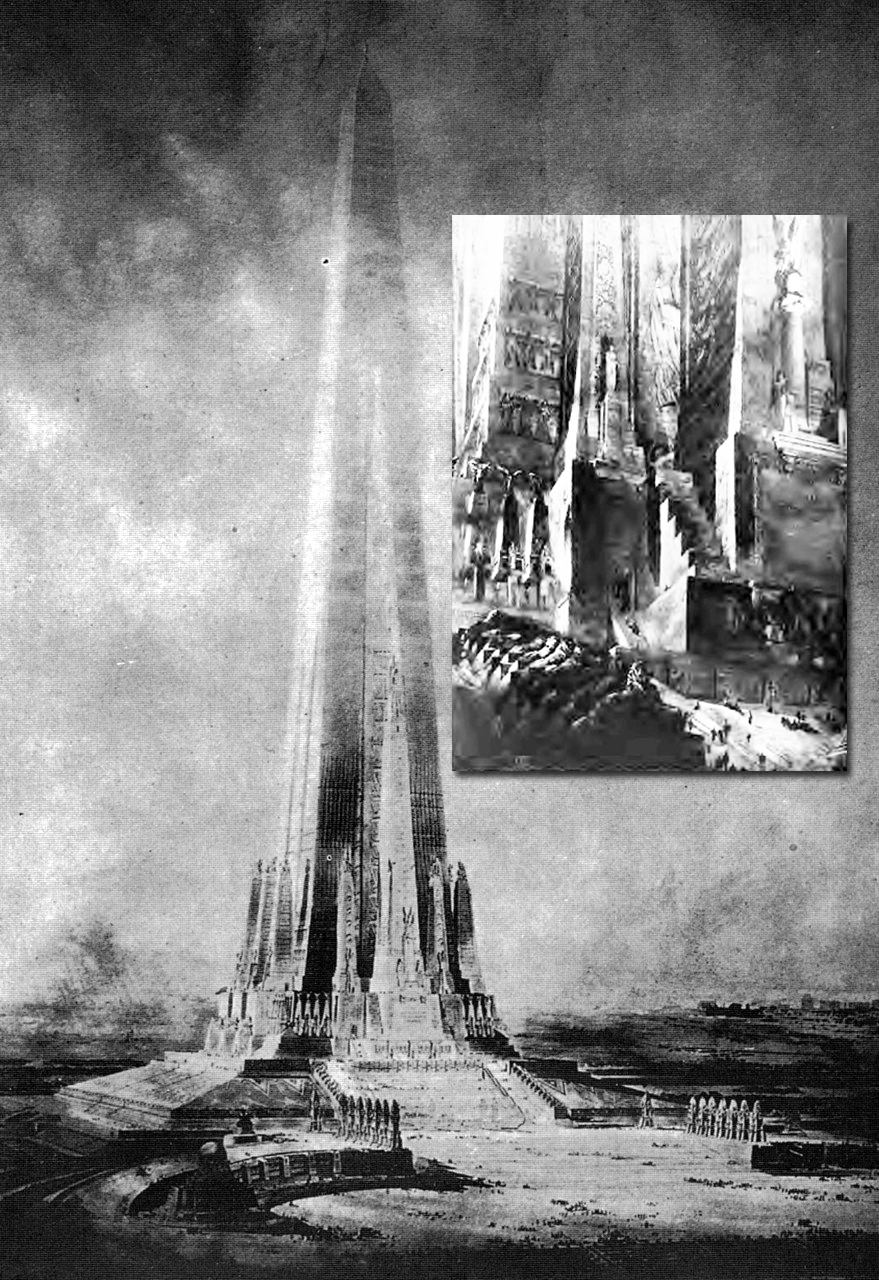 The design shows the monument as it would look if placed on the site of the World’s Fair, known as Jackson Park. facing Lake Michigan. It Is connected with the principal roads and avenues of the park, the principal access being from the lake side, by a water boulevard. A kind of esplanade precedes the access to the principal terraces and platforms, from which can be read the different facts in American history, represented by sculpture, in groups of statuary and bas-relief etching and writing. Eminent men who have made the nation and great are honored. There is a triumphal cortege of industries, science, arts, and commerce, as well as sculptured trophies of all descriptions. The States and Territories are represented by female figures hand-in-hand, symbolizing the indissoluble chain of union; constellations of stars indicate their number.

In the place of honor In the axis of the monument are written the names of the thirteen original colonies, and upon the “stela,” guarded by the eagle, is the Goddess of the twentieth century, the modern Minerva, flanked by ranks of lions roaring the glory of America.

At the base is a great amphitheater forming a sort of sanctuary, where orators, philanthropists, and savants may deliver inspiring words before the altar of their country. In the interior elevators conduct to different balconies and stories, as well as to the powerful beacon, placed 1,500 feet the ground.

In the lake itself, facing the monument on the other side of the esplanade, a basin of vast dimensions for regattas is planned.

In order to preserve a souvenir of a composition of such originality of conception and artistic importance, the French government has purchased two of the smaller drawings for permanent exhibition in the National Gallery of the Luxembourg—a rare honor. Dubon Labrouste, Violet le Duc, and Paulin d’Espouls may be cited among the few architects thus distinguished. Mr. Despradelle will reproduce them immediately, in order to bring the full set to America with him on his return, on Oct. 1.2 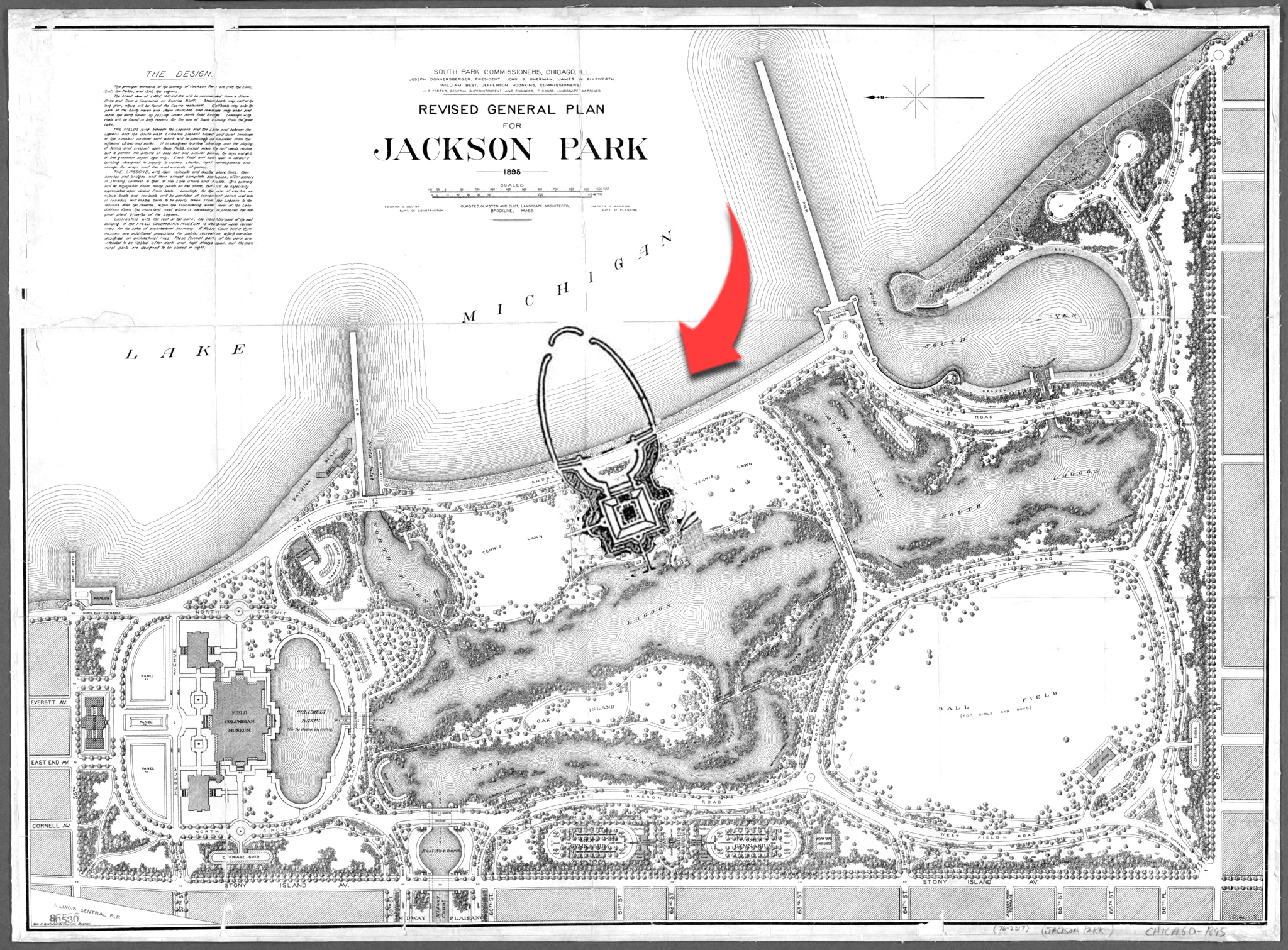 The title of this article is that of a design which was awarded the first medal in architecture at the Paris Salon this year. Titles are catchwords, and it is our purpose to invite our reader’s critical attention to the illustrations presented herewith, that these may be deliberately studied and their significance deeply felt.

It is no casual matter to imagine, much less to design, a monument dedicated to the American people. The author of this design, Professor Désiré Despradelle, was born in France some thirty-eight years ago, and educated at the Ecole des Beaux-Arts. He competed several times for the Prix de Rome, and once surpassed all other competitors (in the year I889 when the prize was not awarded to anyone), held several minor positions in offices doing government work, was appointed Professor of Architecture at the Institute of Technology, and came to this country to take up his duties in I893.

He visited the World’s Fair at Chicago, and there received his first impression of American energy and American idealism.

Standing near the Peristyle of the Court of Honor, he pointed to the dome of Hunt’s Administration Building and exclaimed, “That is fine, it is grand, but I wish it were as large again.” It seemed to him a scarcely adequate centre for the noble collection of buildings surrounding the Court of Honor. He felt too, a regret that the Columbian Exposition should vanish into memory without leaving a permanent monumental expression of its national and international significance. The need of such an expression became, as it were, a personal feeling. He was possessed by the idea of a monument embodying the characteristics of American civilization, to be a memorial to the genius of the American people and a reminder of the glories of the Columbian Exposition in Jackson Park. The thought that the genius of America could be expressed in such a monument and that he could find the expression inspired Mr. Despradelle to devote much of his time and energy during six years to the elaboration of the design that is here suggested. The genius of America, the dominant note of American life, is aspiration. The architectural expression of this aspiration is an obelisk, shaft or spire I500 feet high, carrying at its apex a brilliant beacon light.

It is not necessary to inquire whether such a light would serve a practical purpose, nor even whether the shaft would be constructed, supposing it to be worth while. It would first be necessary to define our terms. The design itself suggests the possibility of skeleton construction enveloped in stone or concrete. The questions of usefulness, construction and expense need not concern us in the least. It is sufficient to consider the design as such, to study the embodiment of so much study, to analyze the complexity of its simplicity, to realize the means by which the effect of immense size is obtained while retaining the utmost severity of outline.

The general view exhibits the central shaft flanked by a dozen minor obelisks, each one a giant but serving merely as a buttress to the great central mass. The view in detail showing the approaches and the foot of the shaft is a masterpiece of design and presentation—a work of Titans, a fragment of a cliff or precipice, but nevertheless a human structure enriched with sculptured symbolism. Although this is no temple, it may well be called a Pantheon of the makers of the nation and to those of devout mind it is a church and spire in one, a spire that may rightly typify this upward looking Christian people. With extraordinary skill the artist has given to the plan of this monument an importance corresponding to its vertical trend. It is like the trunk of a mighty tree whose branches are lost in the clouds, but whose roots spread widely on all sides, uplifting the earth. The beacon of progress is firmly planted. Upon the broad terraces at its base multitudes may wander overlooking the city and the lake. The face of the monument towards Lake Michigan is dignified by an attendant obelisk of greater height than the others, and against this obelisk is an effigy of the Spirit of Progress, the goddess of the twentieth century, and a slab, or rather a wall space bearing the inscription,

To the glory of the American People.

The approach upon this side is guarded by serried ranks of colossal lions like the avenues of sphinxes leading to Egyptian temples, and the adjoining portion of the lake itself is enclosed as a basin a reminiscence of the Court of Honor, a watery Piazza San Marco where the people of the neighboring city in every imaginable kind of craft may foregather and celebrate their festivals.

Further description and analysis are unnecessary. The drawings when published or reproduced upon a suitable scale, will convey their own meaning to all who are willing to read it.

Two of these drawings will remain in Europe, the property of the French Government, to be hung in the Luxembourg in Paris, in a small and very choice collection of modern architectural studies. The rest will be brought to this country, and we hope will be publicly exhibited and widely noticed, as, assuredly, there is in this country the capacity to appreciate not only the usual architecture of convenience or of necessity, but also the finer, more ideal architecture that is called memorial, that is the architecture of the spirit.

All honor to Professor Despradelle for this vision, and for his recognition the “efforts of a people capable of the most daring enterprise, but at the same time showing to the Old World its aspirations while paying the utmost deference to artistic beauty as the setting and ornament of civilization.”

NOTES
1 For comparison, the original Ferris Wheel was 264 feet high, the Eiffel Tower in Paris is 1,063 feet and the Willis (formally Sears) Tower is 1,482 feet high.

2 The tower obviously was never built as funds for building such a structure were unobtainable.