Daniel Thompson will soon erect a building on the corner of Prairie avenue and Twentieth street. The lot has a frontage of 150 feet. The house will be either brown stone of marble, and cost about $100,000. Mr. Geo. Pullman, is also about to build a handsome residence on the same avenue, which will cost about as much. 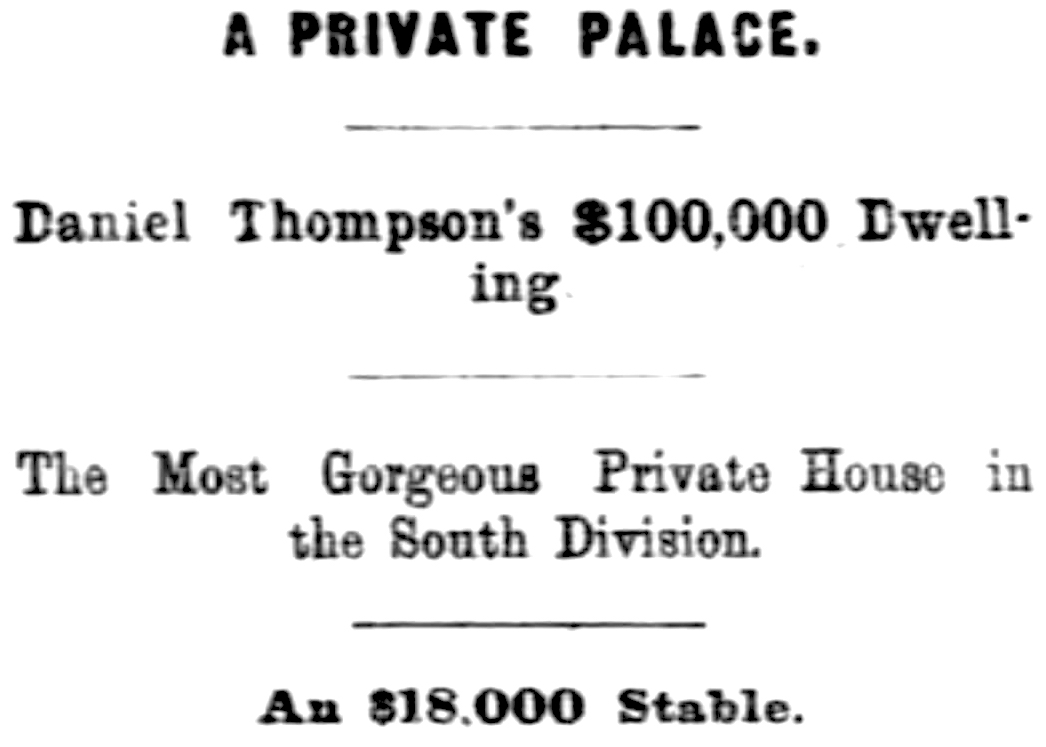 The style and cost of private houses are a fair indication of the wealth of city. Where there are streets lined with marble palaces, and brown stone fronts, there must be money, enterprise, and work. For so young a city, Chicago has a large number of splendid buildings; but so far there is no Fifth avenue established, no sacred region where only fashion can reside. This is partly because we have not yet had time to lay out a street of wealth; and here in the West we are not so exclusive and aristocratic as the residents of the fashionable quarters of Eastern cities. We are not so confined and cramped in our notions. Our ideas nd our minds generally take tone from the prairies, which are broad and expansive. The wealthy, s a rule, do not put on heavy style, and, when they do, it does not turn their heads and make them look down upon the less fortunate. In the course of time, probably, we will grow more generally aristocratic, and th aristocrats will be inclined to have select quarters all to themselves.

While waiting for all this, private enterprise is erecting handsome dwellings, of which the owners and the city may be proud. They are scattered here and there over the streets, and do not seem to concentrate in any particular locality. The residence of Mr. Daniel Thompson, Superintendent of the City Railway Company, now building on the northwest corner of Prairie avenue and Twentieth street, is the latest and most notable addition to the handsome houses of the city. The following details will give an idea of how magnicicent it will be when finished:

The lot has a front of 193 feet on Prairie avenue, and a depth of 175 feet to an alley. The building is in the Italian style of architecture, the extreme size of which is 66 feet 6 inches on Prairie avenue, with a depth of 94 feet. The foundation of all exterior walls is of concrete, 2 feet thick and 4 feet wide, and all interior walls have concrete foundation 2 feet thick and 3 feet wide. The rubble wall of the exterior walls is 25 inches thick to grade line,. upon which the pavement walls will commence. It is faced with ashlar of Connecticut brown stone, from the Portland quarries. This ashlar will have rubbed surface, with square rustic joints. The ashlar is 6 feet high, with heavy moulded base and water-table. The windows for basement are entirely above ground. All exterior walls above the basement are face with the best quality of Baltimore pressed brick, and are constructed with an air space of four inches, so as to plaster upon the brick walls. ll division walls are of brick, resting upon wrought iron beams where there is not a wall beneath. All the windows are trimmed with brown stone. The approach to the main entrance, which is on Prairie avenue (being an east front), is up a flight of stone steps, which is covered by a stone porch, with fluted stone Corinthian columns, and from these columns spring stone brackets, which support a Corinthian cornice of stone. The main entrance is through a tower which is 73 feet high, to the vestibule 5 feet 6 inches by 7 feet, heavily paneled with native wood, Through the vestibule door is the main hall, 10 feet 6 inches wide and 34 feet long, with a hall on one side of this main hall 10 by 14 feet, in the shape of an inverted L. On the left are elliptic headed folding doors leading into the reception room, which is 20 by 20 feet, with a half octagonal stone bay-window, having a southern exposure, with two windows in the east front this reception room. 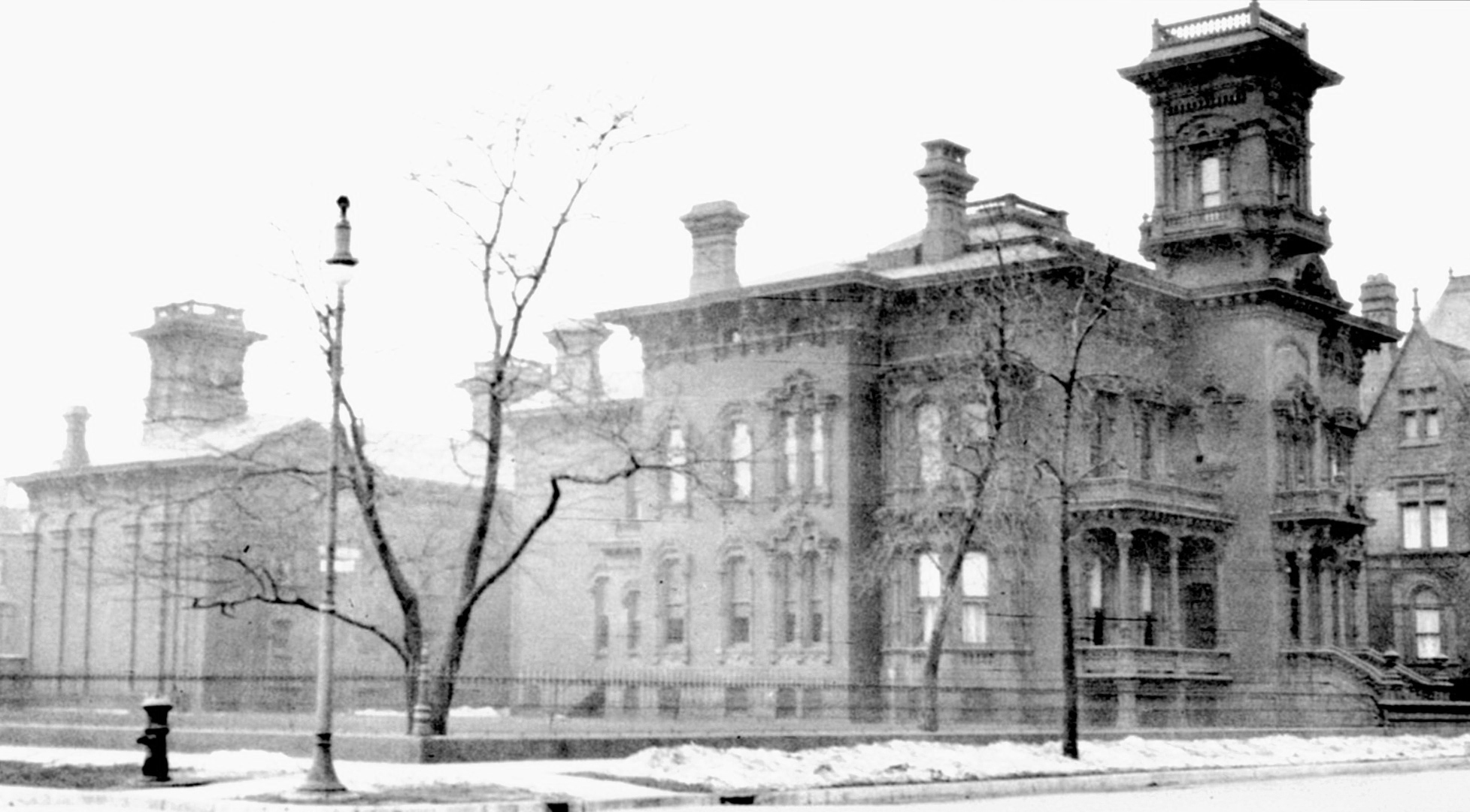 The front windows are shaded by a verandah, with stone floor, Corinthian fluted columns, and stone cornice and roof. On the opposite side of the hall is the parlor, with elliptic headed folded doors, immediately opposite the doors to he reception-room. The size of the parlor is 18 6x 34. It is lighted by two windows on the east front, opening upon a stone balcony, supported by stone brackets. In the rear of the parlor is the library, with which it connects by sliding doors. The latter is 24 6×29, is octagonal in shape, and is lighted by two windows on the west side, and one on the northeast side of the octagon. The library opens on the south by sliding doors to the dining-room, which has double sliding doors, the two rooms being separated from each other by a passage 5 feet wide, extending from the main hall to the butler’s pantry. The dining-room is 16×25 and is lighted by two windows opening to the south. Adjoining the dining-room is a China closet 7 6×8. and the butler’s pantry, 5 6×7 6, is between the dining-room and the kitchen. A side entrance on the south, with a side hall 7×7, is lighted by a large window opening to the south, with closets on the opposite side of the hall for coats, hats, &c.

In the basement, under the reception-room, is the billiard-room, 20×20, with a bay window. Under the parlor is the drying-room, 18 ft. 4 in. x 33 ft 6 in., so arranges as to allow all vapors to pass through the ventilating flues to the attic and into the open air from the attic. The room for the steam heating apparatus is under the library. The wine cellar, ice room, and refrigerator are near the laundry, with water-closet for servants, and wash basin and closet from the billiard-room. The stairway to the second story is from the main hall, with rear stairs to the second story from the kitchen.

The second story is divided into large rooms, with a chamber over the reception room 20×20, with a half-octagonal bay window on the south, and two windows opening to the east, on to the roof of verandah, which forms a balcony, with stone railing and stone balusters around it. There is a ball-room from the chamber, approached from a vestibule 6×6, with a closet at the end of the vestibule, 4 ft 8×5 ft. 6 in. for hanging clothes, with a sliding door from vestibule into bath-room, 8×10, fitted up in the best manner with all conveniences. Opposite the bath-room is a closet which opens from vestibule, 7 ft. 8 in. x 4 ft., with case of drawers in a recess. Adjoining this chamber, in the tower, is a dressing-room, 10 ft. 6 in., lighted by two windows over main entrance; besides these rooms are four large chambers, averaging 16×20 each, with closets and wash-stands to each. There is a bath-room, from to main hall on the rear part, 6×6, and a water-closet, 4×5, independent of the bath-room.

There are three bedrooms over the rear part, with closets and wash-stands to each; also a store-room, with clothes press, which extends to a closet in laundry for soiled clothes. There is also a sink-room on the second floor, and a closet for broom near the rear stairs. There is an attic in the main house, which is lighted by frieze-light windows, and is subdivided into rooms for storage, etc.

The height if the stories is as follows:
Basement, 9 feet; principal story, 14 feet 9 inches; second story, 13 feet 6 inches for the main part, with the kitchen 13 feet; and the second story over kitchen, 12 feet.

The main floor is six feet above the grade line. The total elevation of main building is forty-four feet above grade to top of cornice; the rear part is thirty-seven feet high from ground line to top of cornice. The tower is seventy-three feet high from the ground line. The roof will be covered with slate, with copper flashings, &c. On the north side of the rear part is a stone cistern, which is to contain 6,000 gallons of rain water.

The inside finish is to be of hard woods—all the rooms,—and halls to have heavy enriched cornice, with paneled ceilings neatly frescoed. It is intended to erect the walls and enclose the building the coming year, and finish off the subsequent year. The cost of the building will be about $100,000.

To the rear of the house is the barn, 39×80 feet, built of same material as the house, with corresponding external appearance. The first-story to contain six stables and one box stall, harness-room, carriage-room, and several other rooms and water-closets. Then comes the ice-house, two stories high. In the second story is the coachman’s room, wit two closets, robe room, with closets, grain bins, and hay-room. The barn is ventilated in the most approved manner. The cost of the barn will be about $18,000.

The architect is Mr. L. B. Dixon, under whose supervision the building will be completed.

The Chicago City Railway superintendent, Daniel Thompson, had architect Lavall Dixon build one of the first homes on Prairie Avenue in 1869. The residence was the tallest on the street due to its 75-foot tower and along with its 193 feet of frontage made this home very imposing.

This house was sold and purchased by Samuel Allerton, one of the founders of the Union Stock Yards, in 1879. The house was torn down in 1915, a year after Mr. Allerton passed away.

Samuel’s son, Robert Allerton, who had a lifelong passion for garden design, sculpture, and landscape architecture had already expressed it at “The Farms” estate and sculpture gardens in Illinois (now Robert Allerton Park). His long-time partner (adopted as his son due to a then loophole in Illinois adoption laws, subsequently changed) John Gregg Allerton had studied architecture at the University of Illinois in the 1920s. In 1938 they came to Hawai’i and purchased a relatively small portion of Queen Emma’s plantation for a residence and gardens. They quickly began designing the landscape master plan and individual gardens, incorporating Hawai’ian and new plants they had acquired from tropical Asia and other Pacific Islands, built landscape elements, and sculptures from “The Farms.”