Back to Chicago Streets

HAT Chicago was in the year 1835 can be seen from our cartoon, which has been engraved especially for The Land Owner, from a quaint old map found among the papers of the late John (H.) Kinzie, and to which we have kindly been been allowed access through the courtesy of the Kinzie Brothers, real estate agents, doing business at No. 166 Madison street. 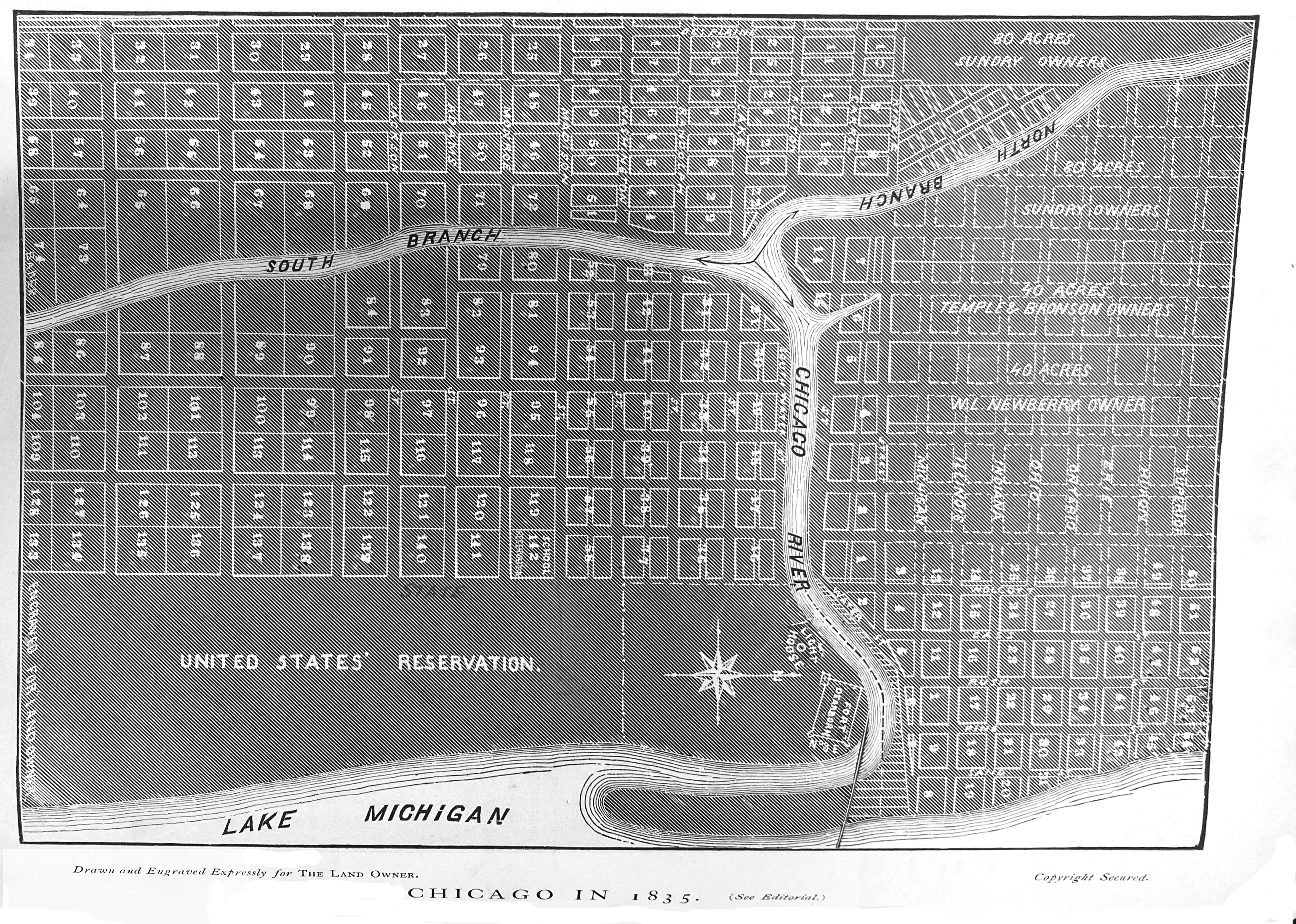 The old map, which we have taken great care to accurately reproduce, is probably the first ever made in Chicago, as Mr. Kinzie was one of our earliest settlers. It shows how wise were the men of that day. Here, and there are “school reservations,”: which were laid out and designed for school purposes by these far-seeing pioneers. Old Fort Dearborn then stood intact, and the United States had a clear and undisputed title to the lake front, where now the proud edifices of Michigan avenue are erected.

The cartoon shows the limits of Chicago in 1835. On the North Side, and without the limits at at that time, will be seen a 40-acre tract of land, marked with the name of the single owner. Can anyone compute what that tract is worth to-day?

By placing our cartoon of 1835 side by side with Blanchard’s last city map, the prodigious growth of Chicago can be somewhat realized.

The late Mr. Kinzie was one of Chicago’s oldest and most respected citizens. The land-marks of his career remain in the name of one of our principal streets, and one of our schools. The reproduction of the old map will serve to bring him to mind, especially among those who knew him, if such a eminder were necessary, of one who was so much epected.

Our readers abroad can see what Chicago was in 1835. But our cartoon plat of the city in that day, will be of little service to them as guide through the present metropolis. 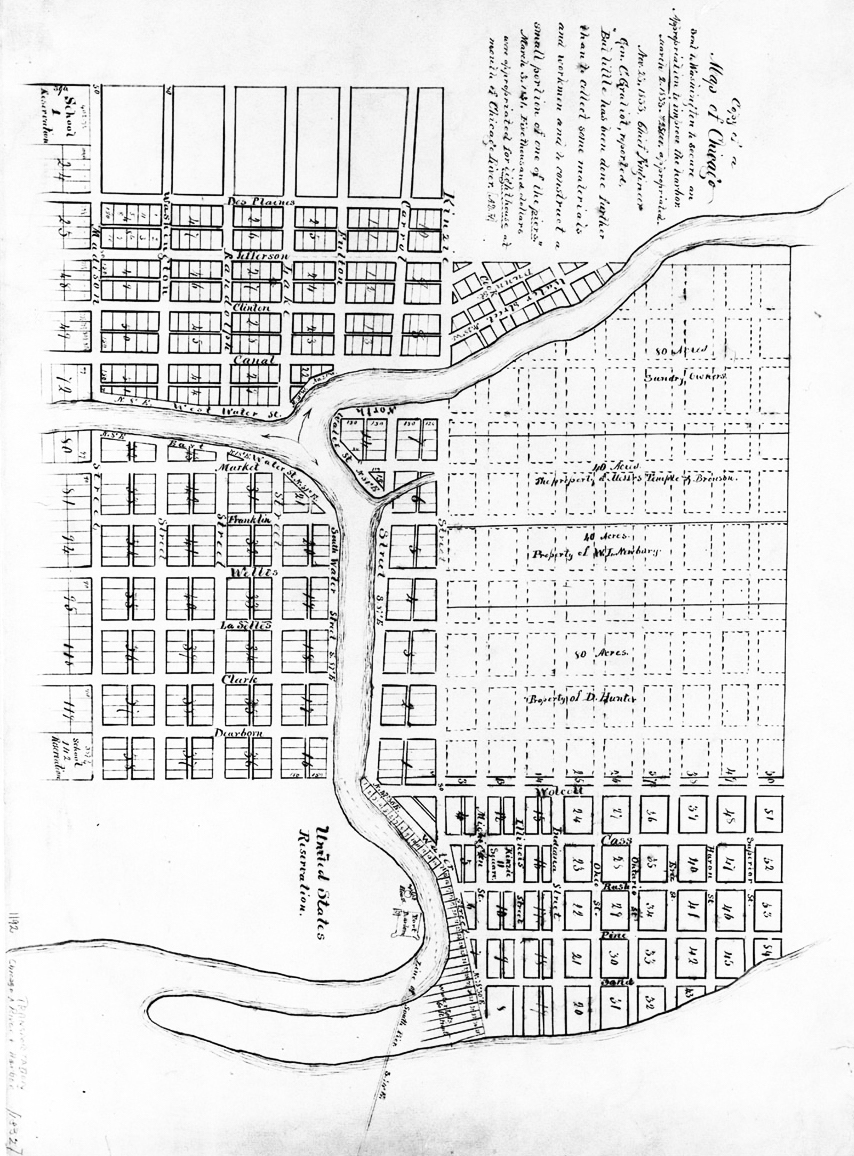 Chicago in 1833
Original John Kinzie map which The Land Owner recreated above. However, according to the hand-written description the map, it is dated as 1833.

This map, reproduced from a lithograph of the original, designed by Walter H. Conley and drawn by O. E. Stelzer, both of Chicago, is here reprinted by their permission. Mr. Conley, after a two year search of libraries and archives, aided in the compilation of historical details by Miss Caroline McIlvaine, who thirty years ago received from the last surviving pioneers their data as to the city of the thirties, laid out this accurate plan of the Chicago of 1833. It will be seen that streets in what is now the loop bore then the same names they have now. The sketches which illuminate the map are as authentic as a careful search of historical data can make them. 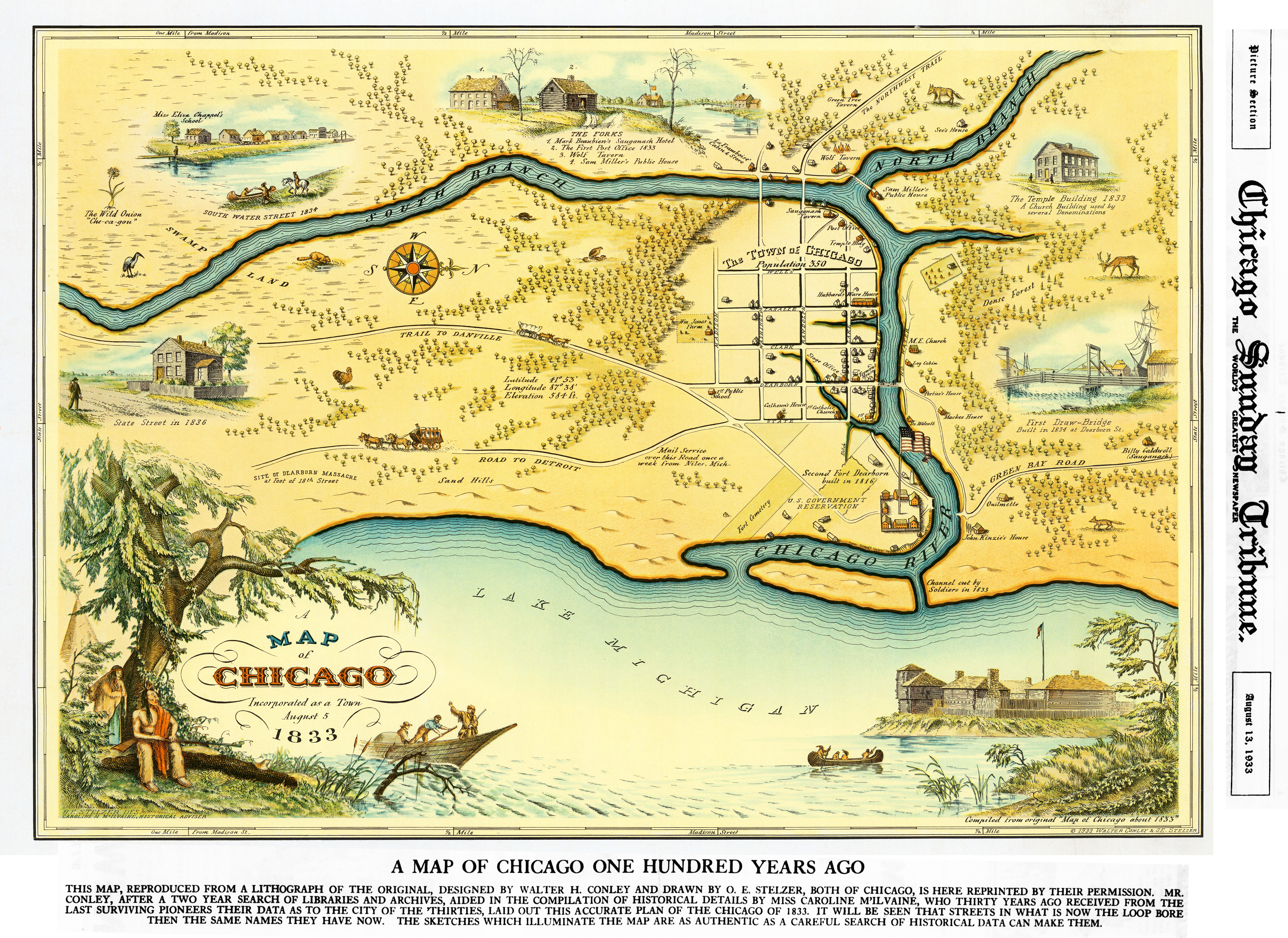 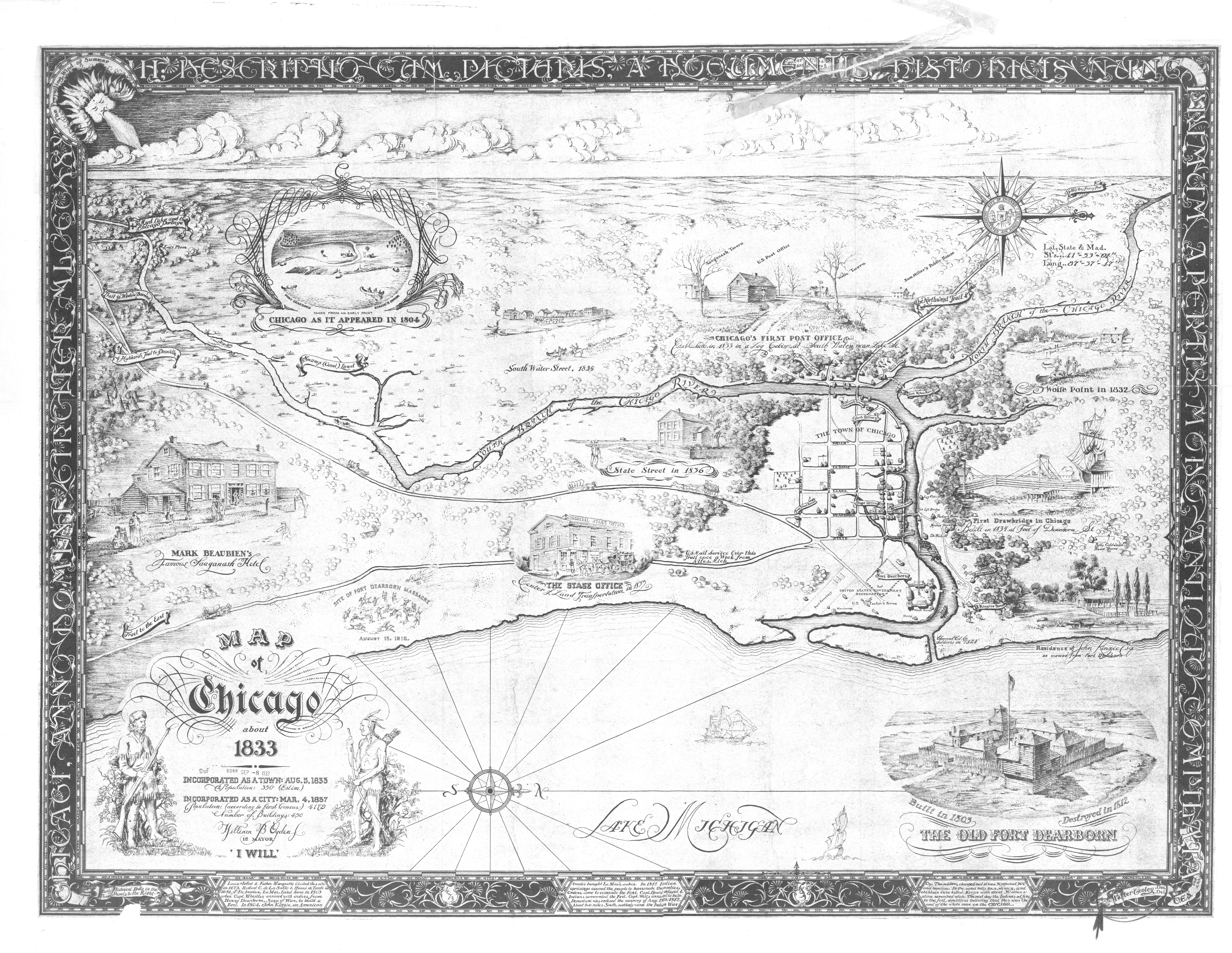 This is the original Conley map which was recreated by The Chicago Tribune on February 11, 1933. 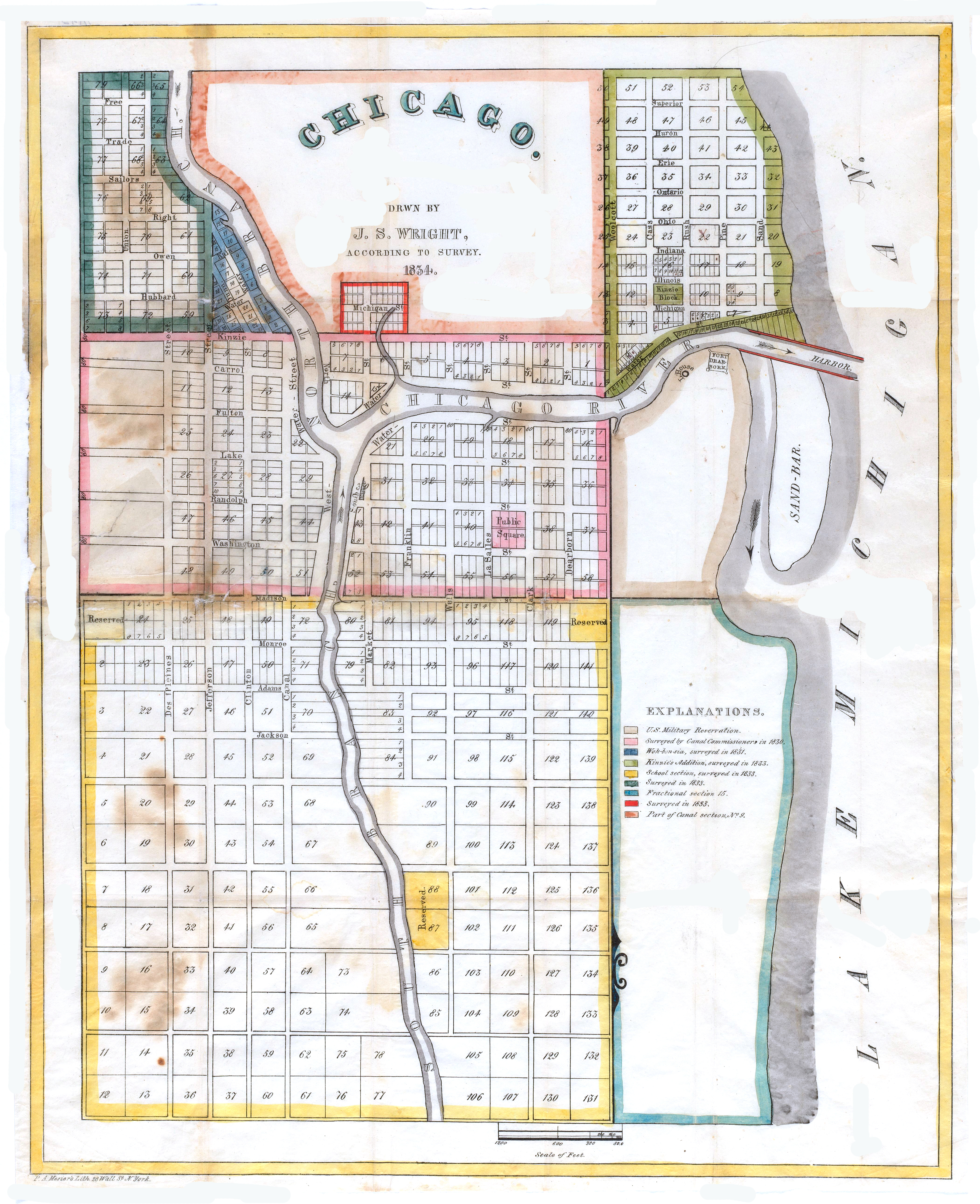 Chicago
Drawn by J.S. Wright,
According to Survey
1834

The very first street Chicago ever had was a muddy, narrow trail running east and west along the south bank of the Chicago River. It’s name described it as it was South Water Street. Along this street the first markets and general stores were built, which eventually became a gigantic produce market, only to be replaced by what is known today as West and East Wacker Drive.

In 1833, when Chicago received its charter as a village, Lake Street was the main street of the town.; in this same year the first Tremont House was erected at the northwest corner of Dearborn and Lake streets. The first store building on Lake Street , a two-story frame structure, was built by Thomas Church. The first Court House followed in 1835 and the City Hotel, later the Sherman House, in 1837. From 1837 to 1842 the first City Hall was located in the Saloon building, a three-story structure at the southeast corner of Clark and Lake streets.

One of the country roads that came into the old Fort Dearborn settlement from the northwest was an Indian trail that was planked by the early settlers of the area to hold their wagons up from the bottomless mud. It was called the Northwest Plank Road. The original Indian trail name was the Milwaukee Trace, which is known now as Milwaukee Avenue.

The first road, crossing the “dismal Nine-mile Swamp”, went west on Madison St. to Whiskey Point (Western Ave. ), thence southwesterly on the Barry Point Trail to Laughton’s Tavern where it forded the DesPlaines River and went southwest to Walker’s Grove, now Plainfield. Portions of it still exist as Fifth Ave. in Chicago, Riverside Drive and Longcommon Road in Berwyn and Riverside, Barry Point Road in Lyons, and Plainfield Road from Ogden Ave. to Plainfield.

There is a dispute about the route taken from Chicago to Widow Brown’s house in the woods on the north branch of Hickory Creek (east of Mokena). One historian asserts that it went southwest (on Archer Ave. to Justice Park), thence southerly through the Palos forests and across the Sag valley to about 151st St., and thence southwest on what later became the Bloomington State Road. Others assert that it went southward on State St. and Vincennes Ave. on the road to Blue Island, and thence southwesterly on what is now the Southwest Highway. These and other dirt roads were superseded or improved by the makeshift construction of plank roads which, although temporary, contributed much toward the growth of infant Chicago. 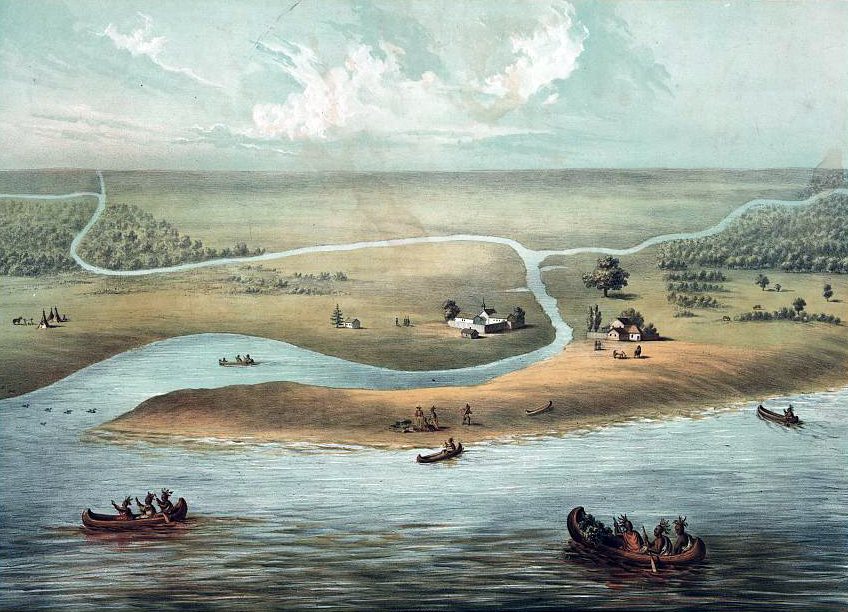 Image Shows Early Chicago Along South Bank Of River
CHICAGO (CBS) — About 40 years before the Great Chicago Fire, this village along the shores of Lake Michigan essentially consisted of a muddy trail along the south bank of the Chicago River along with a few small streets, which today comprise the epicenter of the Loop.

In what may be one of the first images of Chicago (above), a general store, along with a horse-drawn carriage, sits along the bank of the river. Off in the distance is Wolf Point Tavern.

The image, which is featured on a Chicago history website called Chicagology, apparently was from the 1830s. It was published in a 1929 book titled “Chicago and Its Makers.”

Today, that trail is Wacker Drive.

The picture above is a rare view looking west toward Wolf Point (where the river splits) on what was then known as South Water Street, according to the website’s owner, Terry Gregory.

In 1833, when Chicago was officially chartered as a village, the population was around 350. Four years later, nearly 4,000 residents called Chicago their home.

Chicagology focuses on the history of the city before 1900, Gregory says.

A sixth-generation Chicagoan, Gregory, who now lives in Hawaii, has always been interested in Chicago history. Part of his family settled here in the 1850s.

Jerry Cwick’s family tree dates back to the time of this scene. He likes to imagine his ancestors walking along the trail, and it was quite likely that they did.

More family members settled in Chicago from Ireland in 1845. His great, great-grandfather started a shipbuilding businesses located on the site of what is now the University Of Illinois at Chicago, Cwick said. 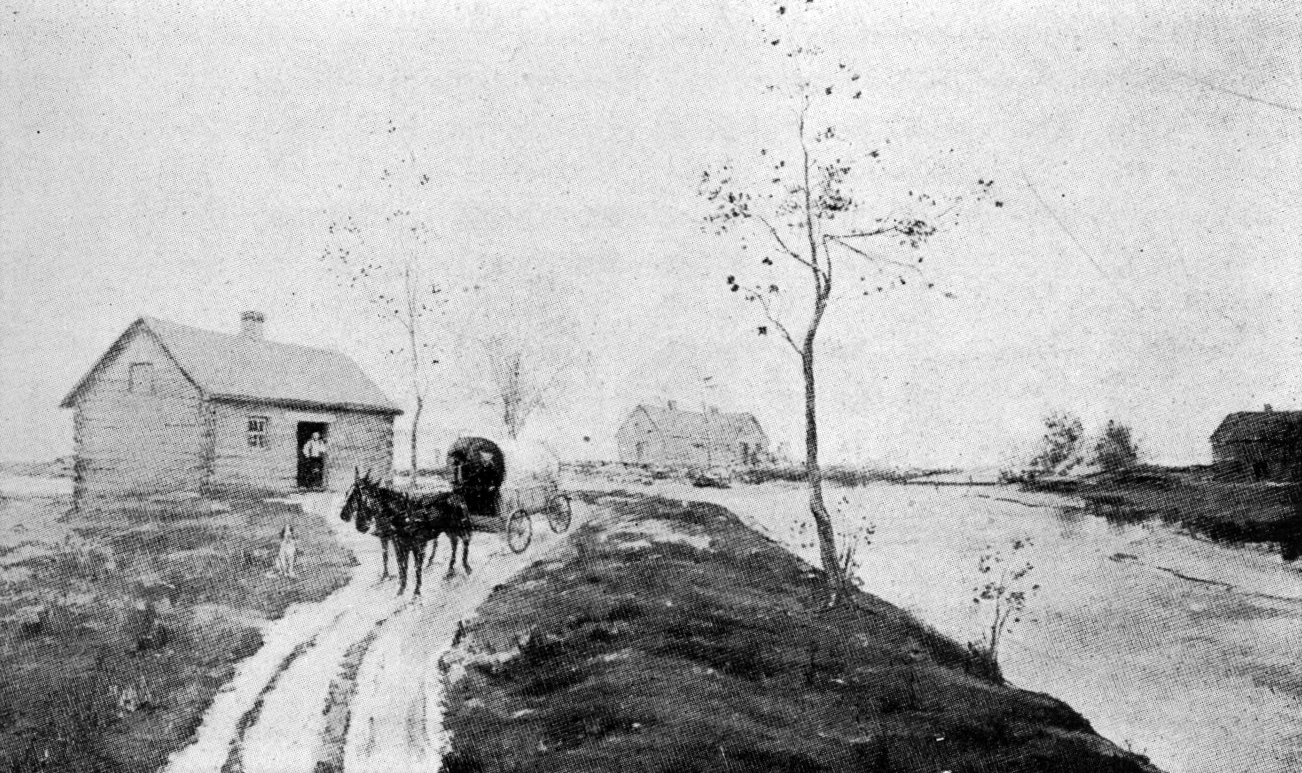 This is a rare view looking west on South Water Street possibly in the 1830s. Hogan’s store was at South Water and Market Streets, while Wolf Point Tavern can be seen in the distance.
From a painting owned by the Chicago History Museum. 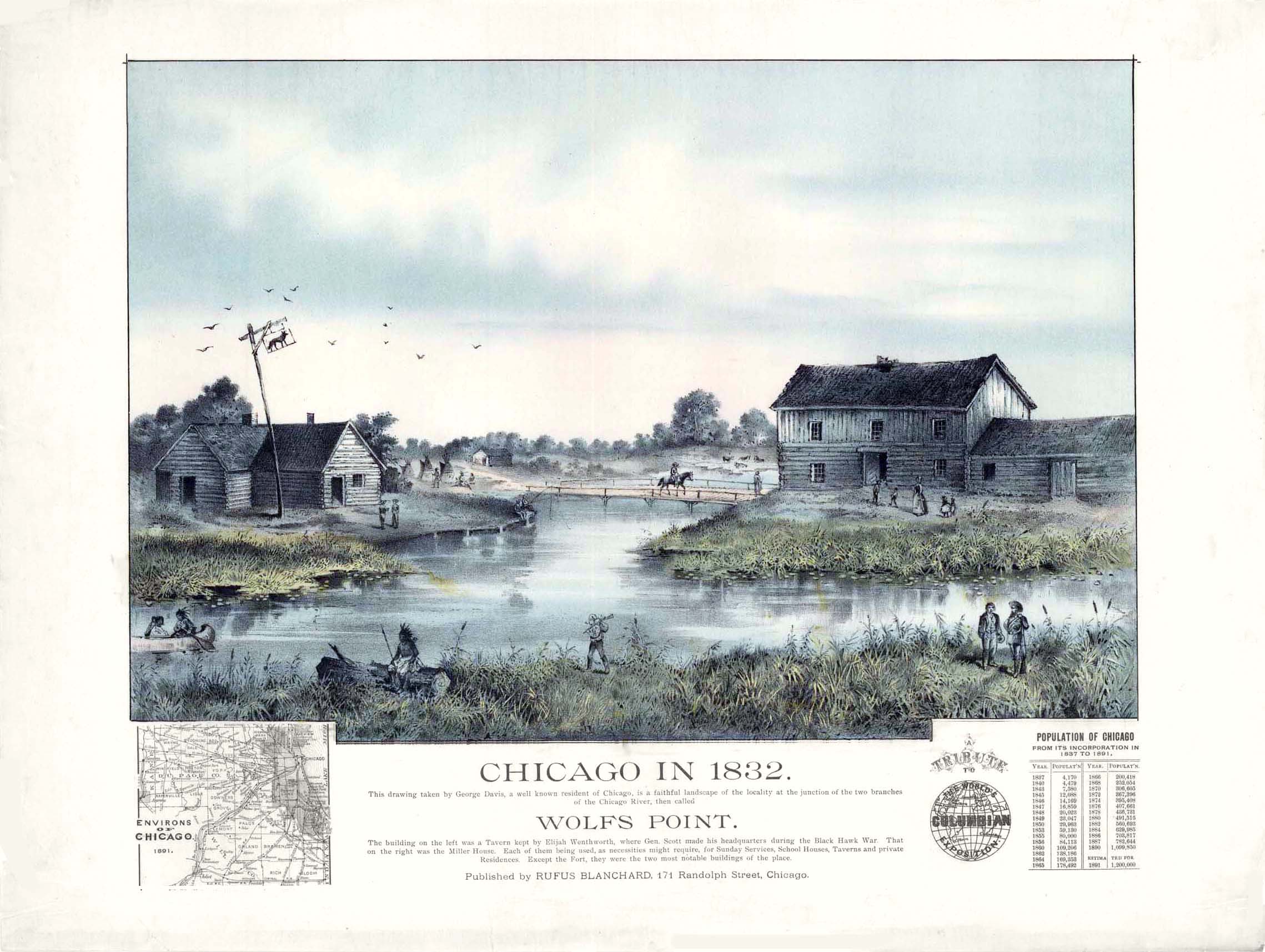 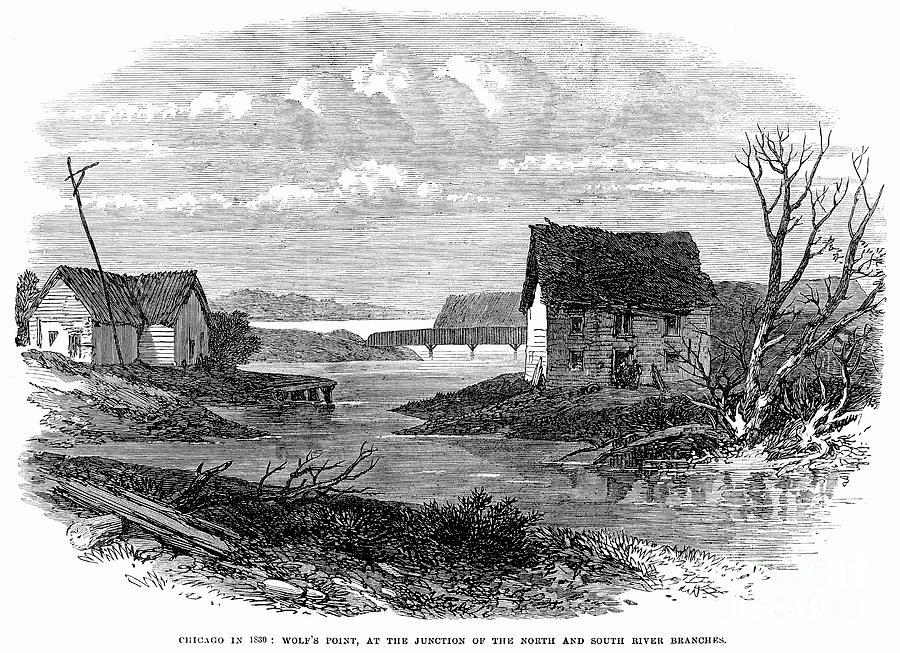 Possibly the source sketch for the poster above.