From THIRTY-EIGHTH ANNUAL REPORT OF THE BOARD OF EDUCATION FOR THE YEAR ENDING JUNE 30, 1892.

Fort Dearborn was located by the United States in 1804 at the Chicago River and Michigan Avenue. The first school taught in Chicago was opened in the fall of 1816 by a discharged soldier in a room in a log house located near the Fort. In 1820, it is reported that there was a school taught in Fort Dearborn by a sergeant of the army. In 1829, Chas. H. Beaubien taught the children of the fort and settlement in a family school. In 1830, Stephen Forbes commenced a school near Randolph Street and Michigan Avenue in a room in a log house which had previously been used by the sutler of the Fort. In the spring of 1832-33. John Watkins taught a school on the north bank of the river, east of Clark Street, and afterward on the West Side at the forks of the river, Lake Street and the River. 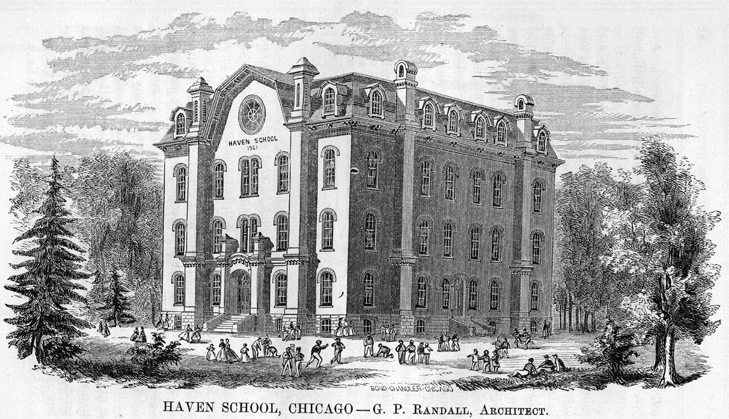 In the fall of 1833. Eliza Chappel. afterward the wife of Rev. Jeremiah Porter, opened a school for young children. In 1834. Mr. G. T. Sproat assisted by Miss Sarah L. Warren taught an “English and Classical School for Boys” in the Baptist church on South Water Street. near Franklin Street. Any, school became a public school by reporting the enrollment and attendance, which being certified by certain school officers, entitled the school to receive a portion of public money, which was the income from interest on money realized by the sale in October, 1833. of the sixteenth section of land granted by the General Government to sustain schools. The amount of money thus obtained was very small, and the schools were sustained principally by subscription. Miss Chappel’s primary school became very popular, and was moved into rooms furnished by the First Presbyterian Church on the west side of Clark near Lake Street. Two assistants were employed, and girls were taught in the advanced branches. The three schools, Mr. Watkins’ on the North Side, Mr. Sproat’s and Miss Chappel’s on the South Side, received public money and were required to give free instruction to all indigent children or orphans.

Chicago was incorporated as a city March 4th, 1837; the charter provided for the management of the schools by a Board of I nspectors, to be appointed by the Common Council, hence our city system of schools has been in existence fifty”five years. The reports for the quarter ending Nov. 1, 1837. show the attendance at the various schools then in session, to be as follows:

The reports for December, 1841, show the following statistics:

The reports for the year 1842 give the following information:

The first step toward uniformity of text books to be used in the schools was taken in December, 1840, when Worcester’s Primer, Parley’s First, Second and Third Books of History and Elementary Pictorial Speller were adopted. In addition there were used Worcester’s Readers and Dictionary, National Arithmetic, Frost’s Elements of Grammar, Greenleafs National Arithmetic, Child’s Arithmetic, Woodbridge’s School Geography, Parley’s Geography and Bailey’s Algebra.

In 1840. the city was organized into four Districts. Districts No.1 and No.2 were on the South Side. District NO.3 was on the West Side, District No.4 was on the North Side of the river. The only school building owned by the city in 1842 was a two story wooden building located on the school fund block bounded by Madison, Monroe, Dearborn’ and State Streets, which is described in a report made by the School Inspectors to the Council, March 30, 1845, after the opening of the new building, as follows: “As it is known to the Council, the only school house or school room belonging to the city was in the First Ward, and this was so old and dilapidated that it was recently sold by the Trustees for the sum of $40.00, and the purchaser has no occasion to congratulate himself on account of his bargain.” In 1845, the Dearborn School building was erected on Madison street opposite McVicker’s Theater. It was 60×80 feet, two stories high. Only the first story was needed. Hon. Augustus Garrett, Mayor of the city, recommended in his inaugural address in 1845 that. the “Big School House” be either sold or converted into an insane asylum, and that a building more suitable to the wants of the city be provided. One year after the opening of the building there were enrolled 543 pupils., Mr. Austin D. Sturtevant who had been iu the employ of the city since October, 1840, was the first principal. In 1846 he was transferred to the school in District No.3, located on the north side of Monroe Street west of Canal Street. In the following year a new brick building was erected on the corner of Ohio and LaSalle streets, known as school No.4 (Kinzie School). In 1847, School No. 3 (Old Scammon) located on Madison street near Union street was completed and occupied. In January, 1850, the old Jones School, northwest corner Clark and Harrison streets was completed and occupied. The salaries of male teachers was advanced from $400 to $500 per annum and female teachers from $200 to $250 per annum in 1845. 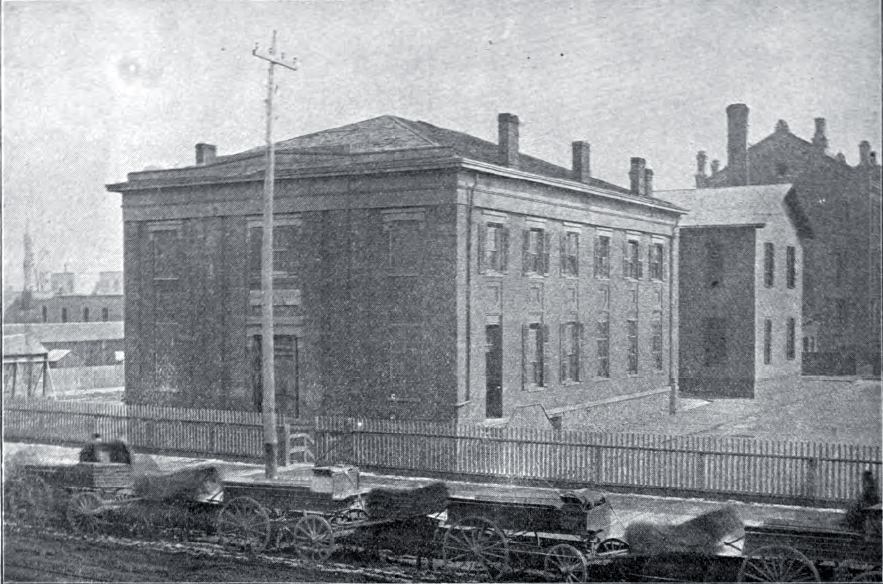 Music was taught by a special teacher as early as 1842, and lessons were given twice a week. The Board of School Inspectors voted in 1850 that the sessions of the schools be held five days in each week instead of five and a half days, and that the half day on Saturday be devoted to a Teachers’ Institute.

School No.5, the Franklin, corner Division and Sedgwick Streets, and No.6, the Washington, corner Indiana and Sangamon Streets were completed and opened in January, 1852.

The following table gives some interesting statistics showing the growth of the city and of the schools:

The statements made in this report have been obtained from n historical sketch of the Chicago schools prepared in 1879 by Mr. Shepherd Johnson. Clerk of the Board of Education.