Important Duties of Men on Busy Corners, and How These Officers Are Selected for Their Posts

IF THERE is one division of the Department which may be said to contain more of the finest than another that division would undoubtedly be “The Traffic,” for the traffic officer must not only be a good policeman, but he must dress well and look the part. He is to many citizens the only contact they have with the pol!ce. As the Chief has more than once pointed out, With only 5,000 officers to cover 200 square miles of territory, the wonder is that you ever see a policeman at all.

Thus it is that the six-footers, the Apollo Belvideres, the regular featured, the quick, alert and most engaging dispositioned men are sifted out f6r the traffic. The officers must be of a kind also who will compel instant attention by their very attitude and manner, for although they do not have so many chances to show their mettle in battling with crooks as do the men on regular posts, they do have in their care the lives of thousands each day and it is essential that the traffic policeman should be easily noticed, and his orders instantly obeyed. Out of every fifty candidates tried out for the traffic job only an average of eight qualify. 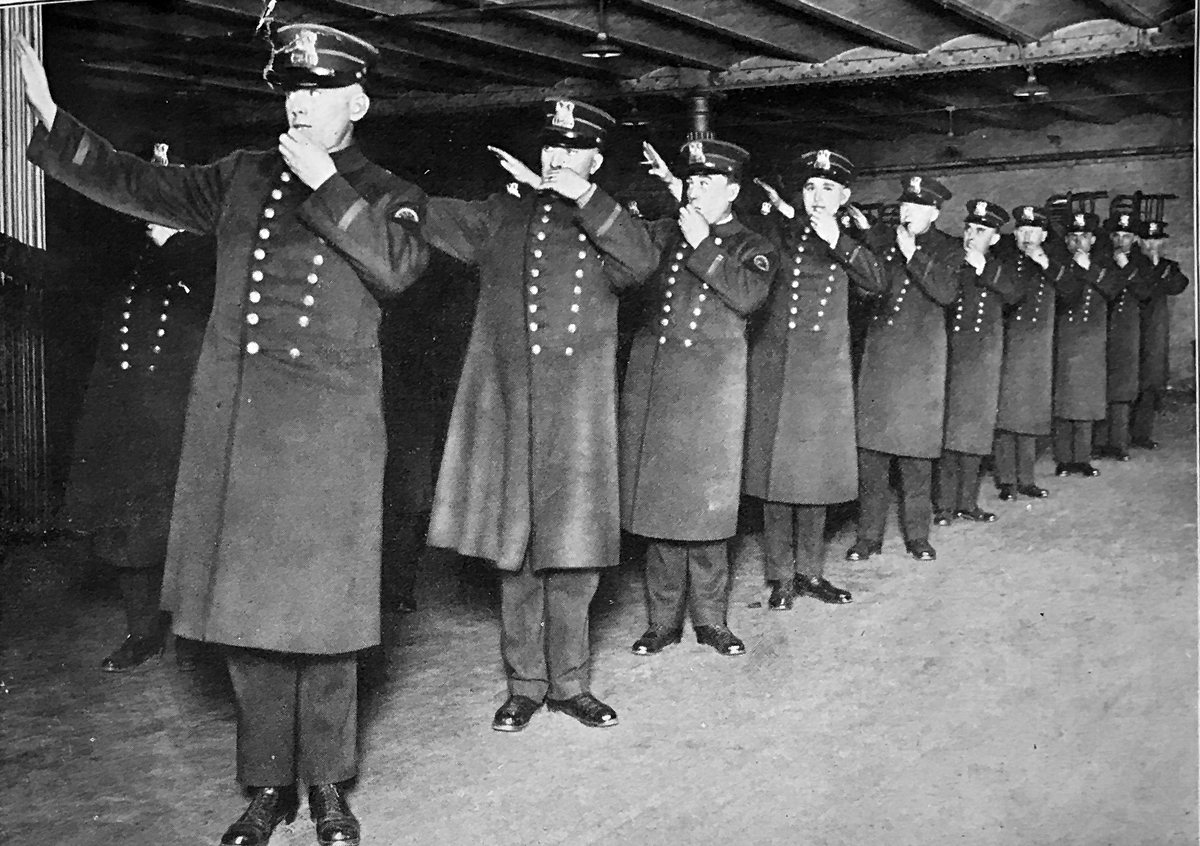 SIGNALS OF THE TRAFFIC DIVISION ARE STANDARDIZED BY FREQUENT DRILLS

Assignment to the Traffic Division is eagerly sought after by many patrolmen because of the distinction and the privileges the job carries with it. While the duties are continuous, and often nerve-racking, yet the hour are not so long as on a regular post, and ordinarily the traffic officer has his Sundays off.

There are about 450 policemen who, in Department parlance, “work out of ‘The Traffic,'” most of whom are detailed in the down-town district in and around the loop. When one considers that State and Madison St. is reputed to be the world’s busiest corner; that an average of over 282,000 vehicles, including Michigan Boulevard through traffic, pass through the Loop each day; that street cars, trucks, pleasure autos and pedestrians are equally assertive of their right to rush along pell mell-it becomes apparent that but for the traffic officers the situation would be chaos. Another glimpse at statistics shows that fit the peak of the day’s hustle there are 57 vehicles per minute using the block between Adams and Jackson on Michigan Blvd., and that, taking the main traveled of the Loop as a whole, there are 10 to 15 vehicles a minute using each important block during the busiest hour.

When some great emergency arises, as was the Eastland disaster or the race riot, and the men of the Traffic are needed for more important work elsewhere, the public is in a state of perplexity and confusion until the officers return. The philosopher who said that “nobody is indispensable” had never considered the case of the traffic officer in a big city.

While the loop handles its million or more daily, Chicago is not to be thought of as composed only of State Street. Rather it is a great city of teeming smaller cities each with their great arteries of trade and travel, each demanding the utmost care in handling its intersections of main lines of traffic, such as:

and, of course, many points on Sheridan Road. All of these would be congested in a mass almost untanglable if officers were not present to govern the stop and go. And likewise the boulevards, which are favorites for auto travel, must. be liberally manned with policemen to keep down speedmg and to make sure that other rules are observed. As an arm of the law, the Traffic Division reaches far and is a powerful instrument of order and justice.

The Traffic Division, as such, has jurisdiction in the district bounded on the north by Chicago Ave., on the south by Roosevelt Road, on the west by Halsted St., and on the east by the lake. Outlying busy corners are policed by officers from nearby stations.

Men who work out of the Traffic Division proper are periodically put through drills calculated to increase their efficiency. For example. of late pedestnans and motorists have noticed a decided betterment of the method of giving signals. Instead of beckoning with his forefinger or waving his hand waist high, the officer uses a full sweep of the arm in a motion which cannot be mistaken.

It is no easy job, this standing on a corner constantly on the alert, throughout a day. Even on a pleasant spring day the work is hard enough. But the citizen who grumbles because he has to walk a few blocks in inclement weather should remember the traffic officer. He parboils himself in summer temperatures running up over the hundred mark without being able to enjoy even the relief of a shirt sleeve costume; he all but freezes in the winter, endures dust and rain and sleet ; and all the time he merrily blows his whistle. 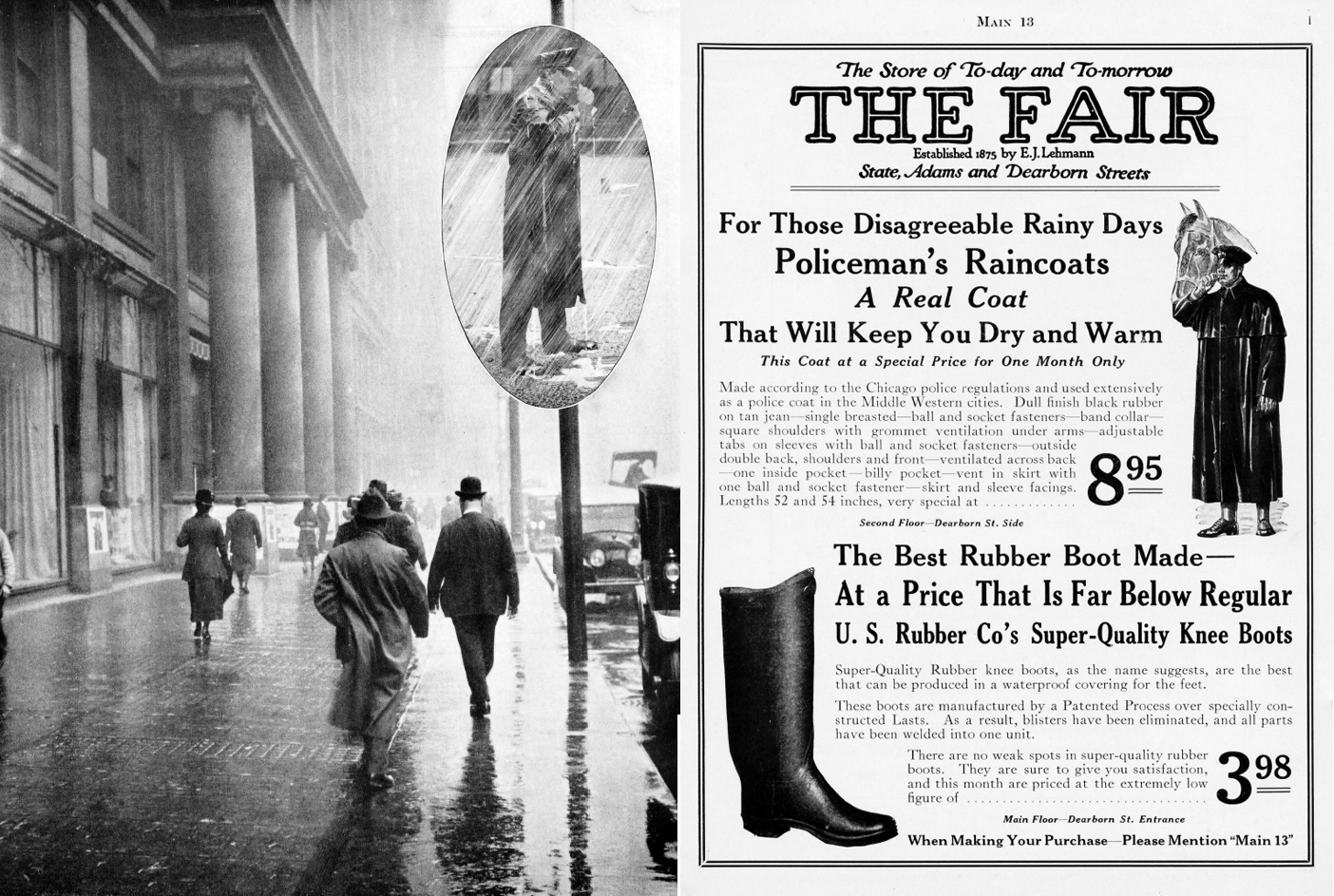 “While the public dodges drops between showers, the traffic officer stays at his post rain or shine.”
Main 13.
1922

Though it is true that a traffic officer’s day ordinarily consists of constant repetitions of similar monotonous acts, yet occasions often arise which have all the relish of the spectacular. A fire, as one of them Wittily said, makes it necessary to “dam the traffic up one side and down the other” in order to make a clear track for the speeding trucks and engines, and even the veteran policeman never fails to get a thrill as the rush of wheels and the clanging bell goes by.

Not so very long ago a bandit smashed a jewelry store window and endeavored to get away With a quantity of diamonds and watches. Two traffic officers, one on duty and one just going to his corner, gave chase along a crowded street and gave the thief the scare of his life.

Recently, too, a chauffeur who had been held up and ordered to drive to a certain facility, deliberately went against an officer’s signals and got out of his taxi to explain, at the same time whispering to the policeman that a bandit was in his car. The officer by some of the quickest thinking on record took the situation in at a glance and collared the holdup before the latter realized anything unusual was happening.

Officer Bror Johnson killed by a bandit whom he surprised in holding up a Cook’s Tourist office, was a traffic policeman (story below).

A few weeks experience at a busy corner qualifies an officer to become a referee i the squared circle. He must break up incipient fights caused by arguments over collisions, and calm the irate pedestrians who are missed by a hairbreadth as careless autos lurch around corners. He must keep his temper far beyond the point when the average citizen’s anger would boil over, and be a linguist of emphatic ability when he is confronted with cases of impudent disregard for the law. He must keep a sharp lookout for pickpockets. He must answer questions about everywhere and everything, from everybody, and during all the bustling day never miss a half minute, or at most, a minute in signaling the traffic to stop and go.

Speaking of “stop” and “go,” some other cities equipped with automatic signals to direct traffic, and the system is being tried on some of Chicago’s boulevard corners. But even if the mechanical device gives satisfaction it can never do away with the traffic officer on crowded centers; at some points two officers are reqUired during crowded hours and these are often supplemented also by members of the mounted squad who, by the way, are a part of the Traffic Division.

A good traffic officer is soon spotted by the public and a genuine spirit of cameraderie grows up between him and the thousands who repeatedly pass his way. Some of the policemen on loop corners have been at the same or a similar post for many years. One of the veterans is Patrolman Albert Pugner (the tallest man of the Traffic Division). Patrolman Peter Hall is another old timer, as is Patrolman Dennis Hayes. All three of these have recently been assigned to less strenuous duty as a reward for long and faithful service, but they are still remembered by a legIon of loop district friends. A mounted officer who has also been in active service near the heart of things for a decade or more is Patrolman Patrick J. O’Boyle.

The Traffic Division is commanded by Captain P. ). Lavin, with Lieutenant John Martin in active charge. Its history is replete with bright episodes and its efficiency within recent months, has reached its highest level. Visitors to Chicago, who have traveled much in other sections of the country and in Europe, commend our traffic officers as the world’s finest. They are a part of the city’s equipment, of which Chicagoans may well feel very proud.