Named for the phrase a caller would give a telephone operator in order to be connected to the police, Main 13 was one inexpensive means for Police Commissioner Charles C. Fitzmorris—a former newspaperman and City Hall insider—to lift the morale of a besieged department and to boost its public image.

The magazine was run out of City Hall by Jack Lait, a renowned Chicago newspaperman who later came to coauthor the City Confidential guides, and Fred Drake, the business manager of Good Housekeeping. Each issue included a “Home Beat” section for “the women of policemen’s families,” featuring recycled home economics articles on such topics as delicious vegetables and the ways that the French use leftovers. Other features—on subjects including how to best state a case in court, how to care for police horses, and how to best use tear gas—had the cheery, instructional feel of Good Housekeeping.

The magazine’s name changed to Police 1313 in 1923 and 1940 was the last year the magazine, a pre-curser to the now defunct Chicago Police Star Magazine, was published.

The Chicago Police Department publishes a monthly magazine know as Main 13, which is the telephone number of the Department. The current issue is the fourth number of the first volume. It is a credible publication, typographically pleasing, with a colored cover and many illustrations within its 36 pages. It is “devoted to news of the Police Department and articles of interest to the policeman and his family.” There are technical articles by competent writers, statistics of the department’s work, hints for the housewives, and a section devoted to the men who receive “creditable mention.” All city employees may consult “Main 13” in this Library. They will enjoy reading it. 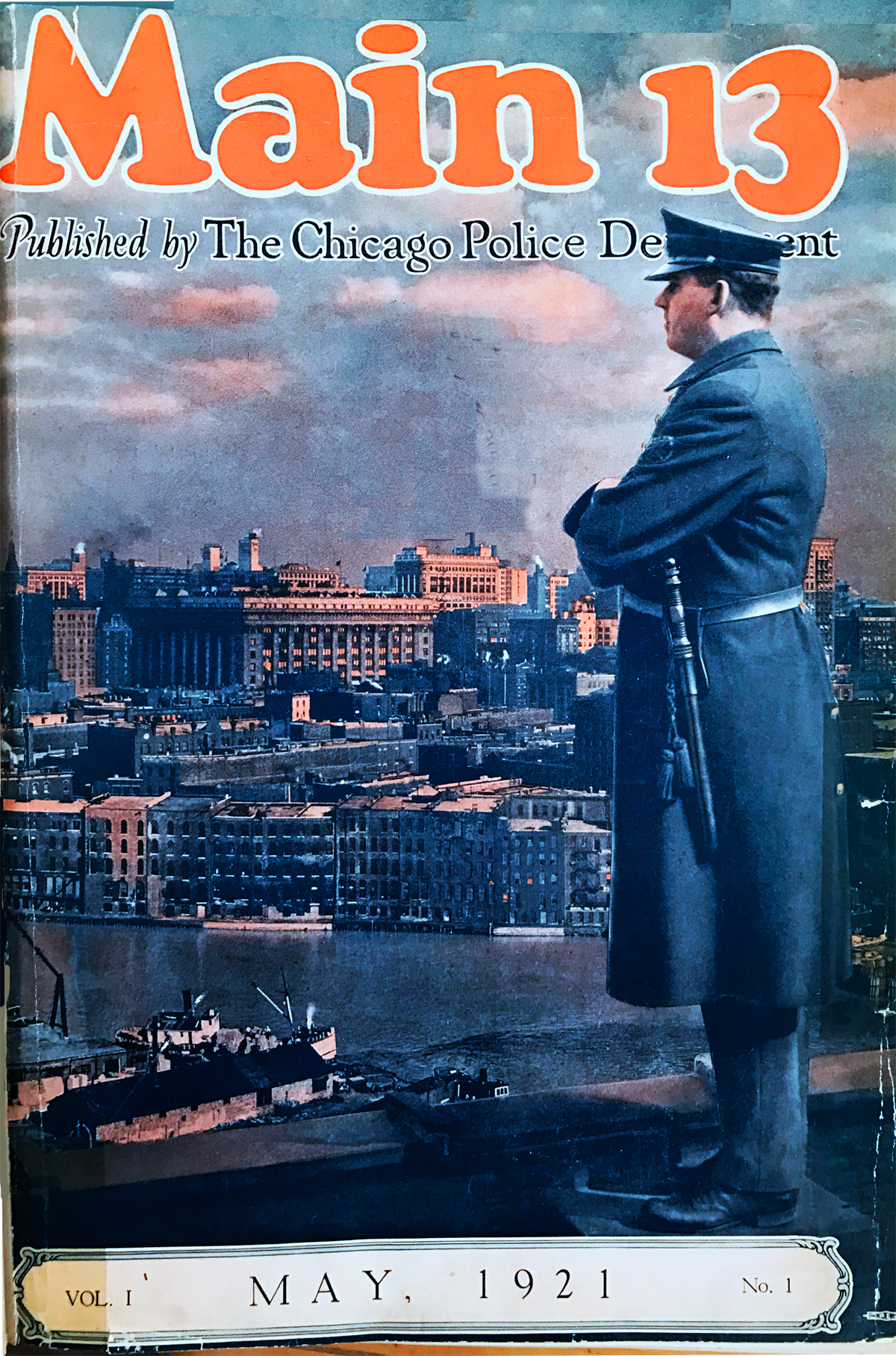 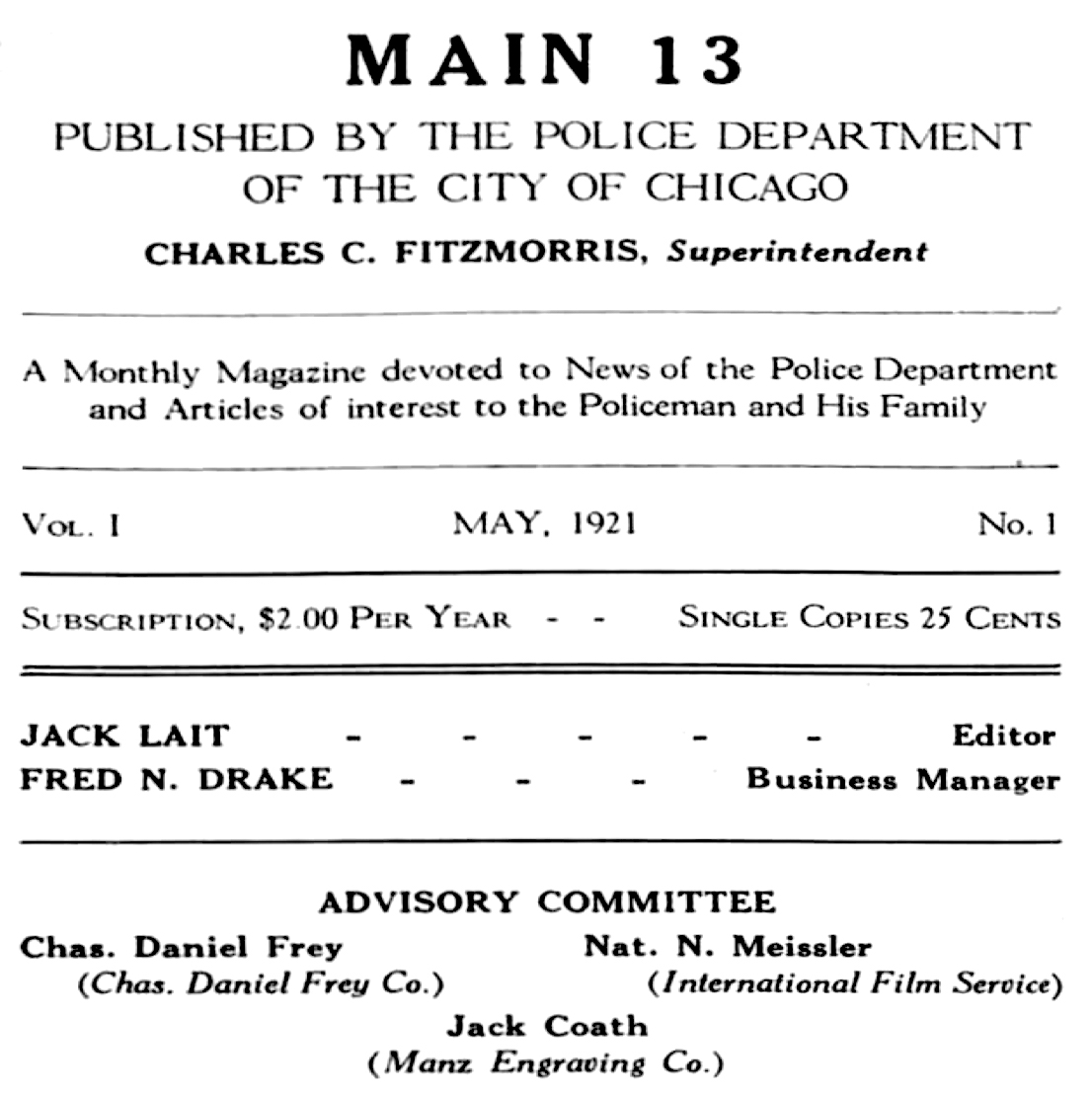 WHY MAIN 13?
THE need for some periodical to· stand as an expression of the police. department has long been recognized and it is with considerable satisfaction that it has now been found possible to create this magazine.

It is to be a publication devoted to furthering the best interests of the police of Chicago both as a whole and as individuals.

The first object to be accomplished is the promotion of an added spirit of cooperation between all branches of the department. C hicago·s police force is in reality one big family but it needs the humanizing influence of a magazine to make it acquainted with itself.

As it is, even the most widely known policeman comes in c.ontact with only a very small percentage of his fellow workers. for there are more than five thousand of us. And any one who started out even to say ‘”Hello'” to each one the job would take a long, long time before he finished.

But we can say ” Hello'” through this magazine in a great many ways. Those who have gained celebrity through heroic exploits will have their pictures in these pages; we will print full reports of police activities both in line of duty and in outside doings such as athletic contests and the concerts to be given by the police band now being formed, the extraordinary accomplishments of members of the force who have studied law, or painted pictures or have done any other praiseworthy thing. True enough, we are all a body of thief catchers and guardians of the peace, but in our off hours one half of the force ought to know how the other half lives. The magazine will help to bring us together.

It will also be useful for another purpose in serving as a clearing house for new ideas which will make us all better at our jobs. Often a policeman will run acrOSs some new stunt in police work which would benefit the entire force if the suggestion could be brought to the attention of everybody in the department. Here is where the magazine will become of real value in building up efficiency. A prize contest is being planned so that those who have constructive suggestions may send in their ideas and stand a chance of reaping o substantial reward for putting on their thinking cap. Don·t worry if you are not a literary genius. What is wanted is good ideas written in your own way. The language will be put in shape in the office if necessary, but you 11 be surprised how well you can write if you sit down and tell the facts as you would tell them to a friend.

The best part of the magazine is saved to be mentioned last. There is going to be a woman’s department. All of us know that the ladies are the inspiration for the courage and sincerity we put into our work and they deserve a lot of consideration in these pages. So besides the feature stories that both the men and women will like, we are to have articles on household matters written by experts in that line. It is expected that this will prove one of the most valued sections of this periodical. We urge the wives, mothers, sisters and sweethearts to see that the men folks do not monopolize the magazine. It’s for you, too, and don’t you let them forget it.

A great deal of hard work has been put into preparing this first number and we hope the force will like it. If you do, please say so, and if you don’t, then tell us how we can improve the magazine.

And as a word of appreciation the thanks of the departmen~ should.go to the following firms whose generous cooperation has m large measure made possible this publication.- Charles Daniel Frey Co., Good Housekeeping Publishing Co., International Film Service Manz Engraving Co., Seaman Paper Co., and Severinghaus Printing Co. 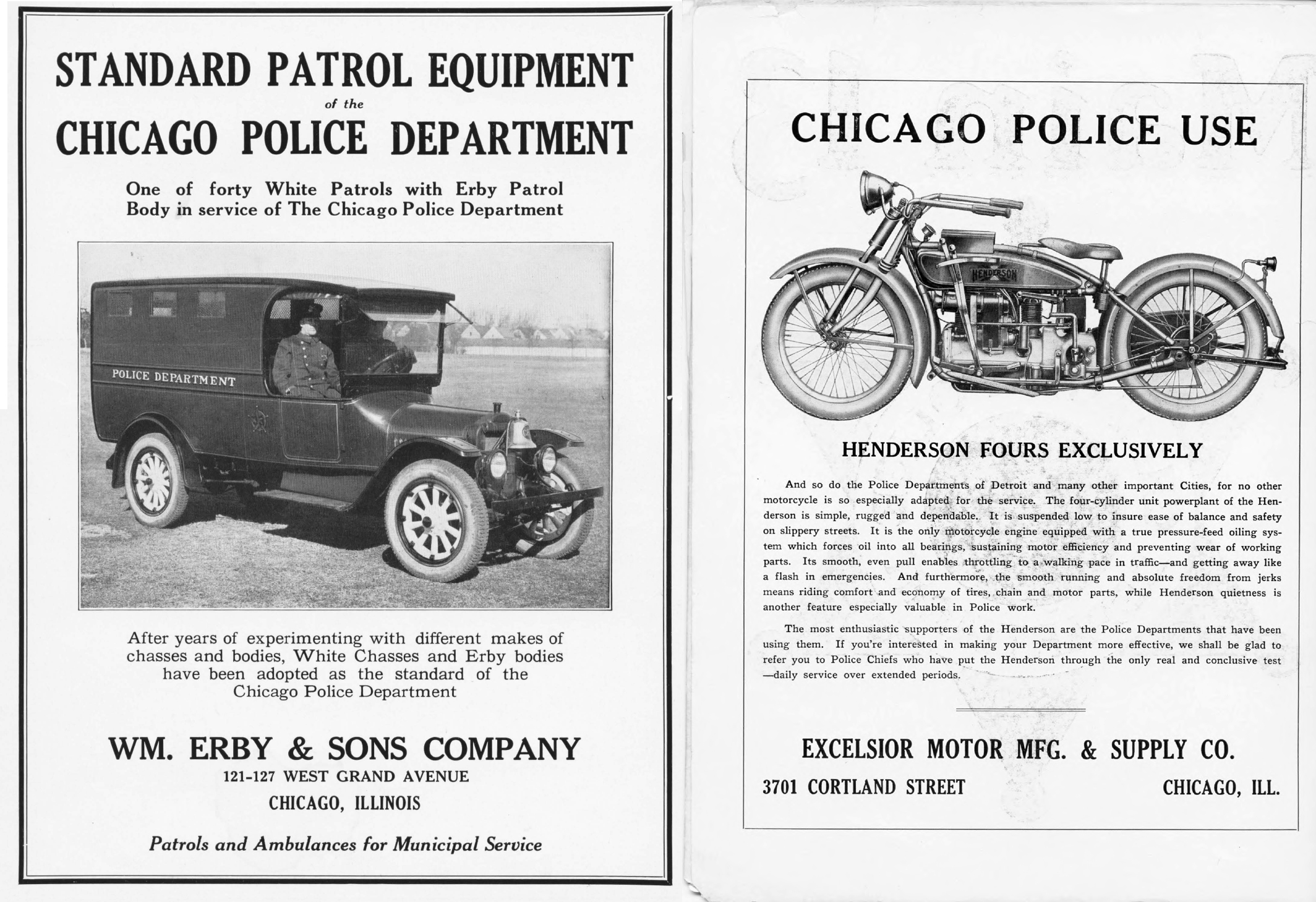 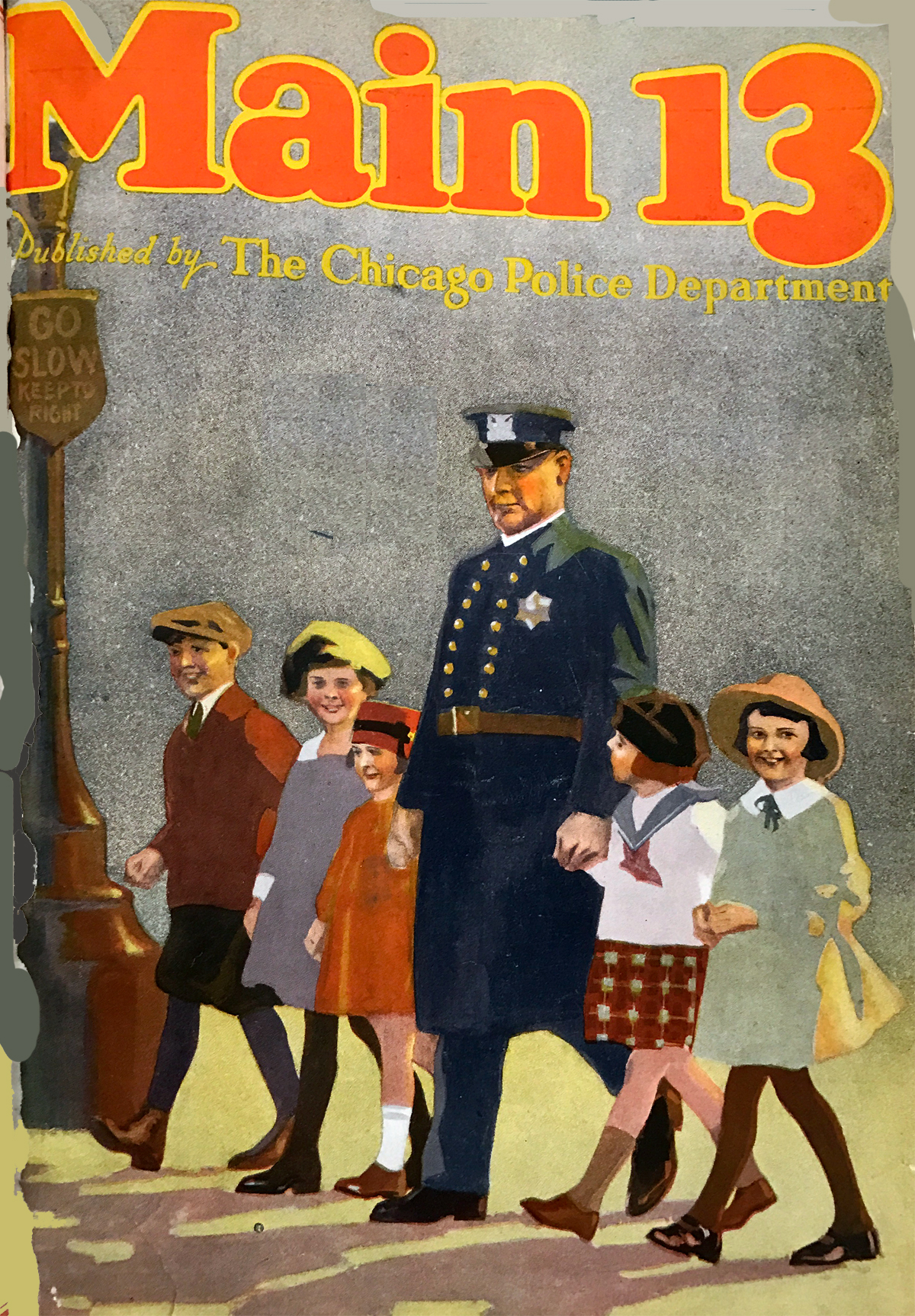 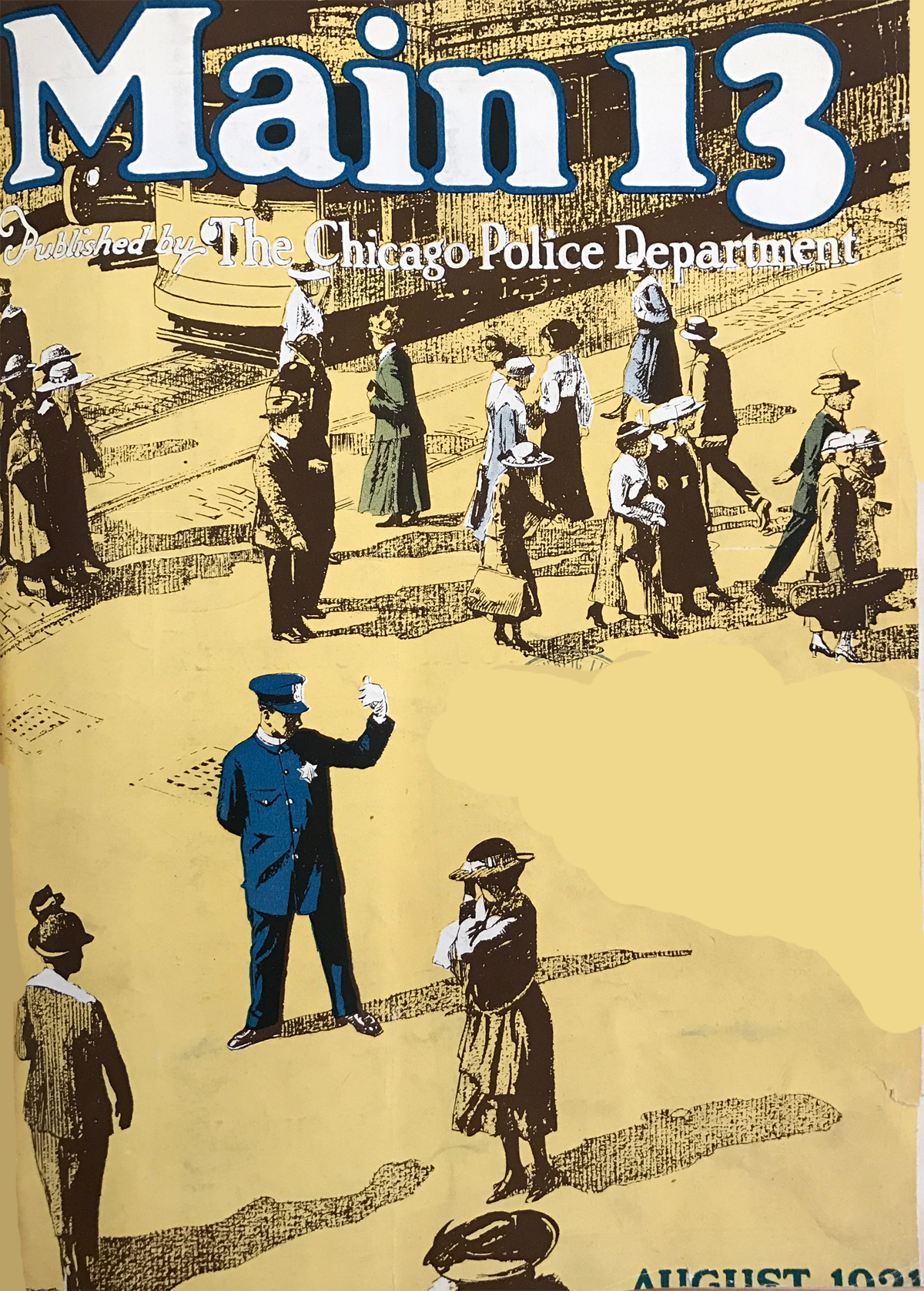 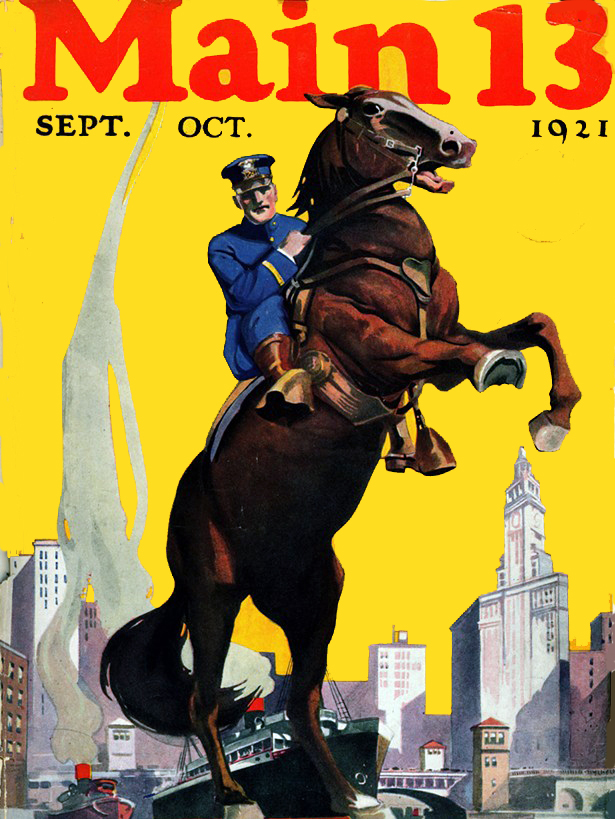 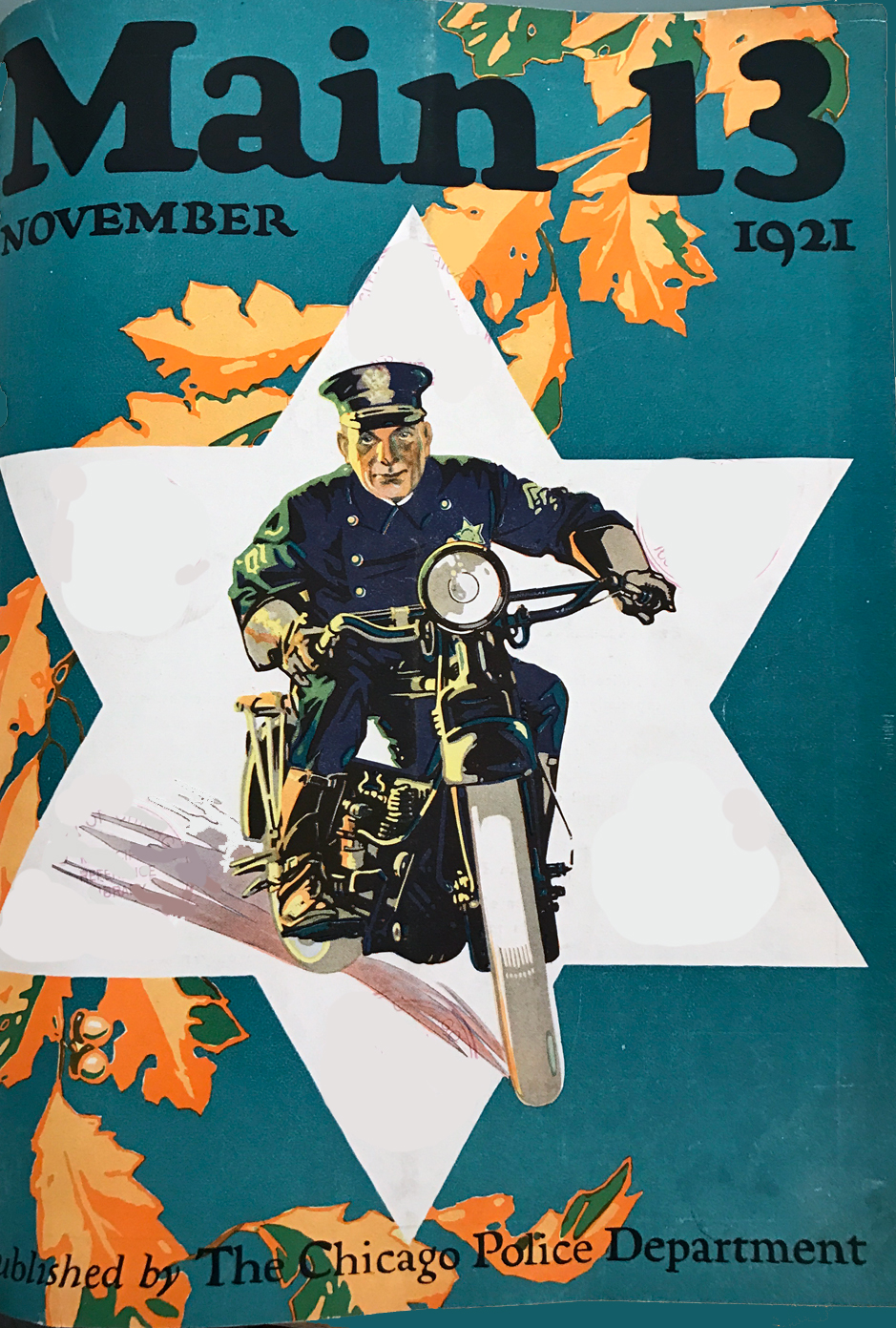 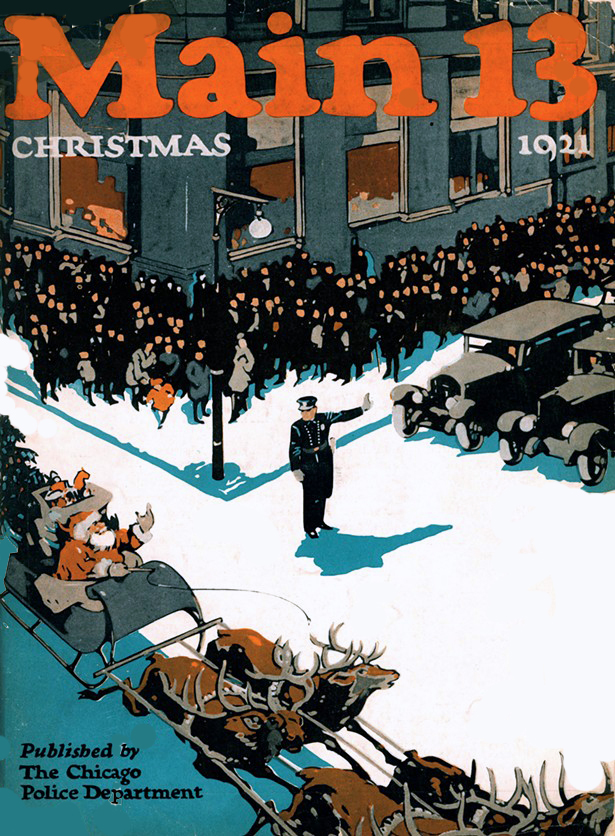 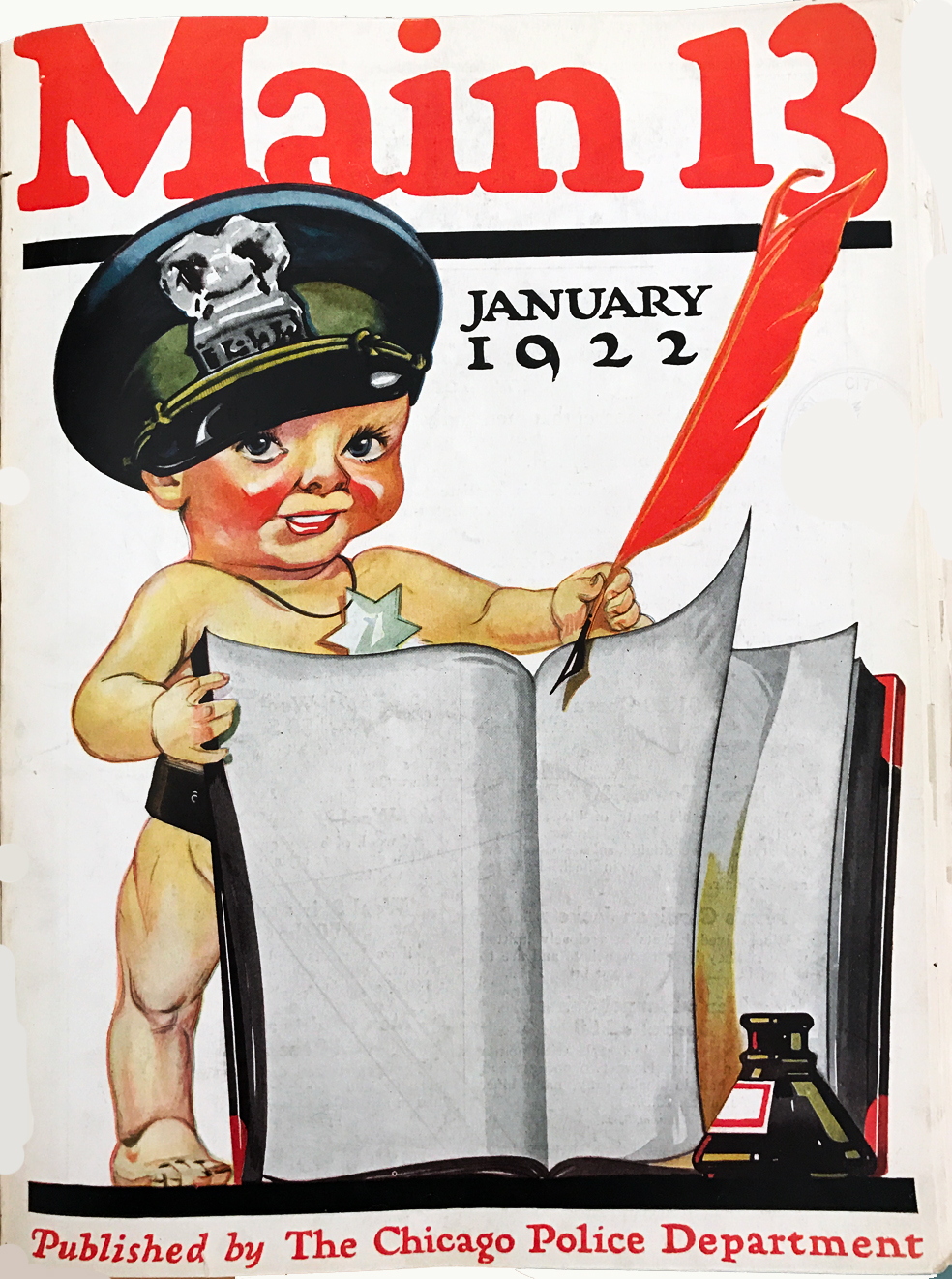 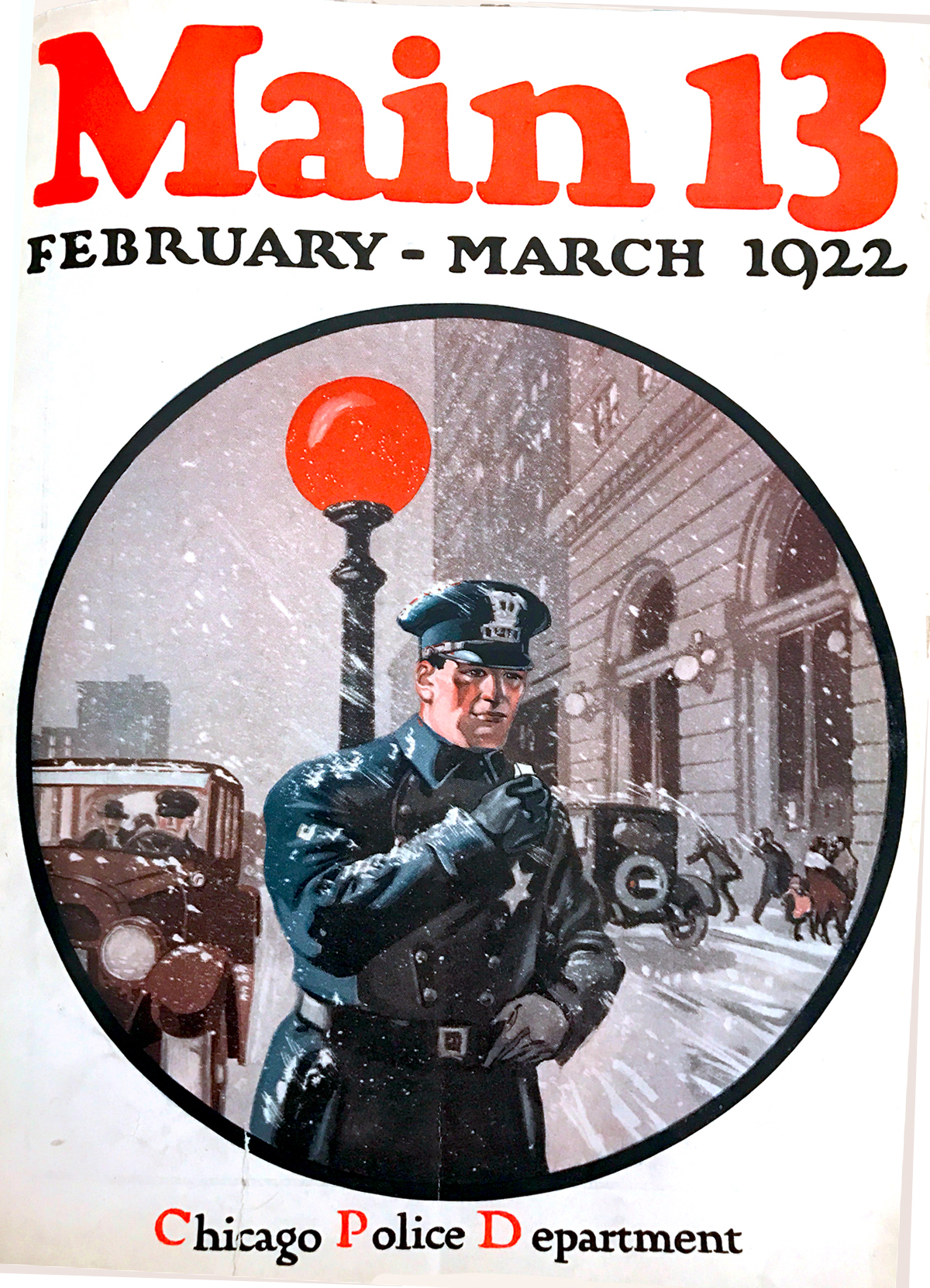 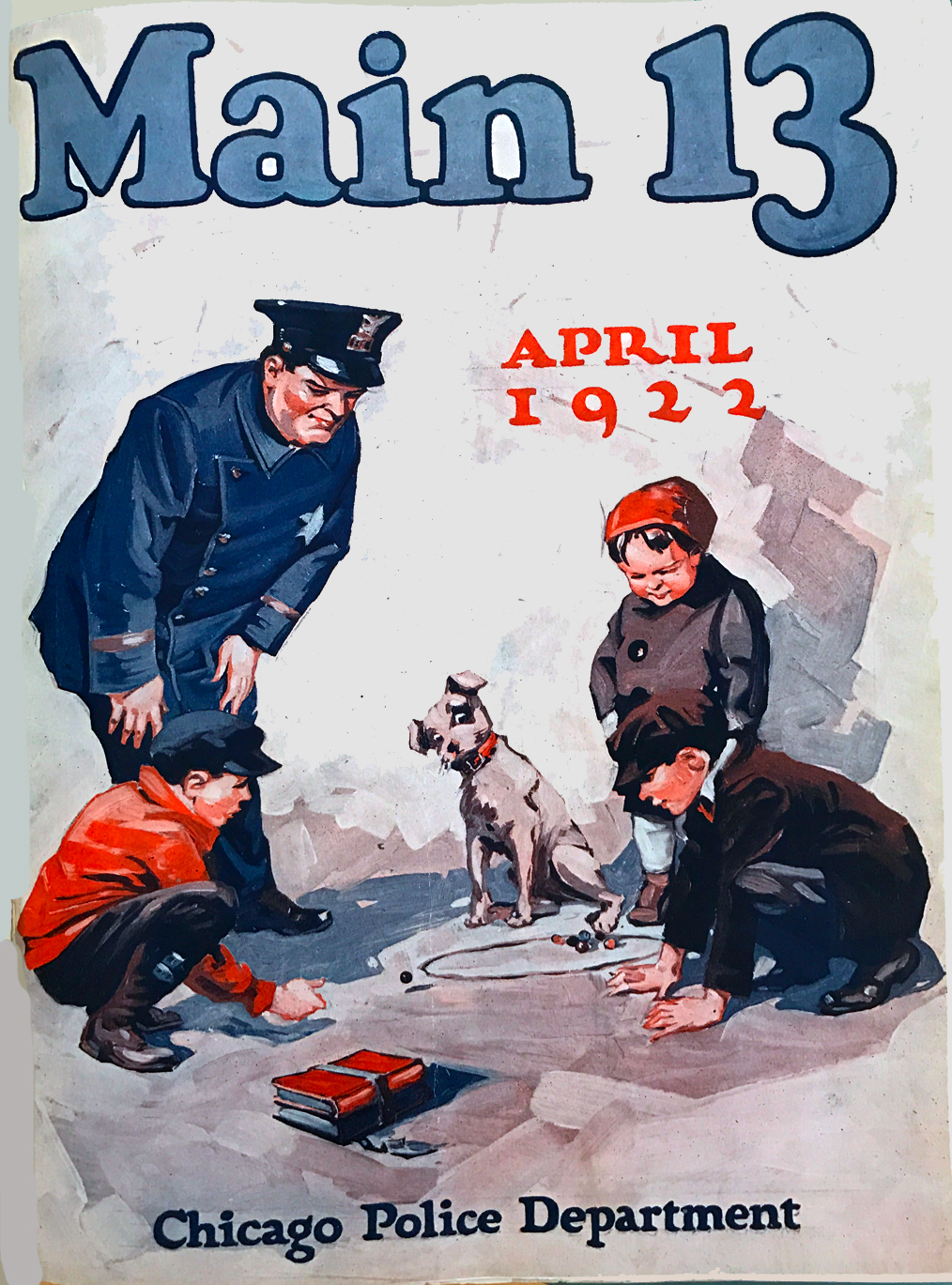 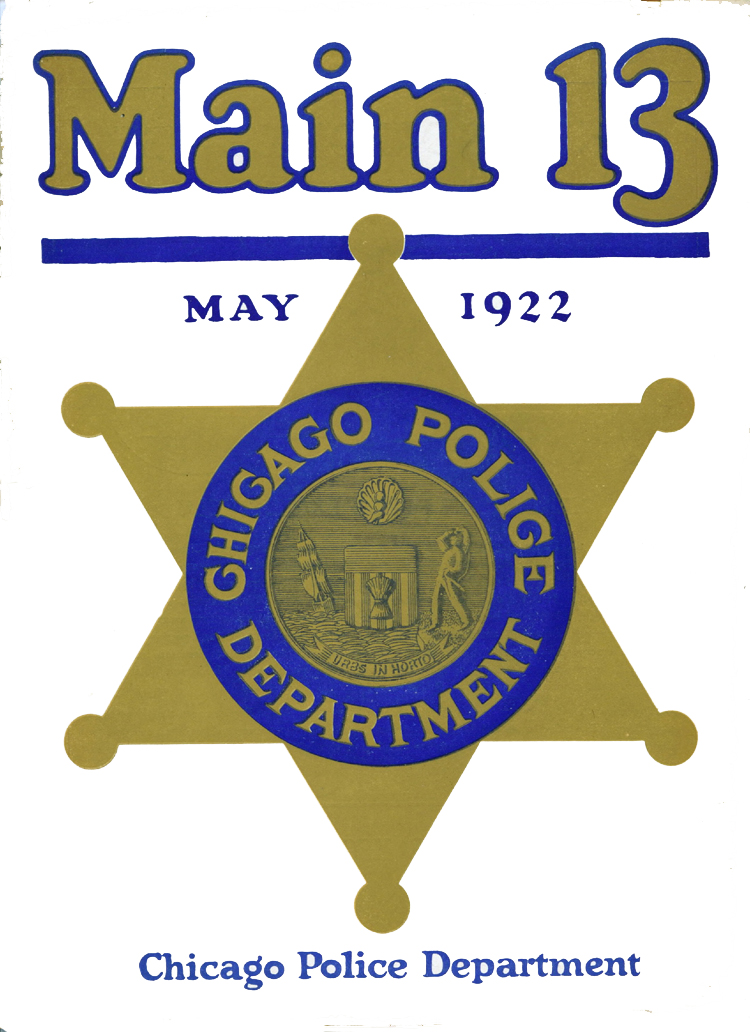 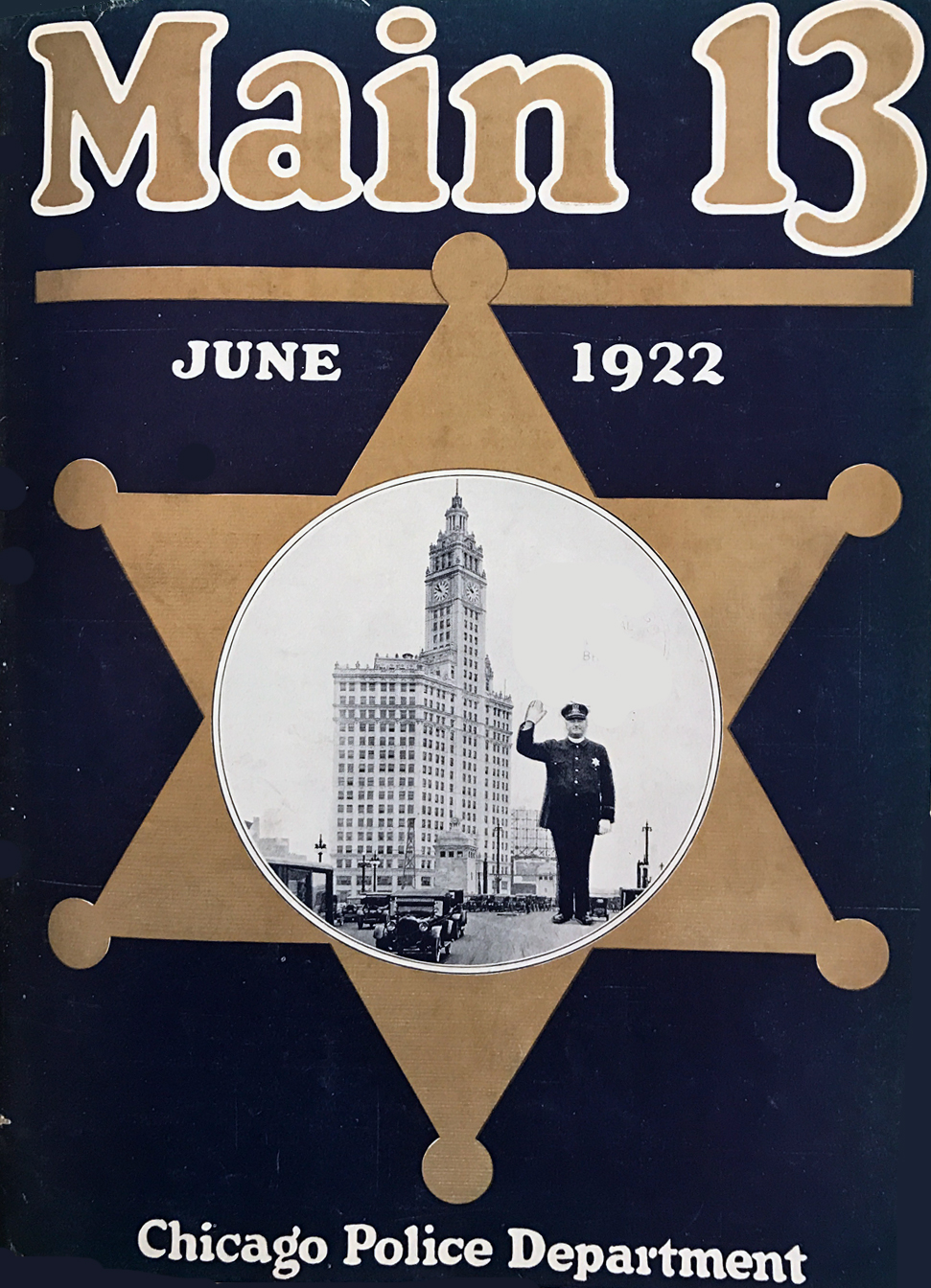 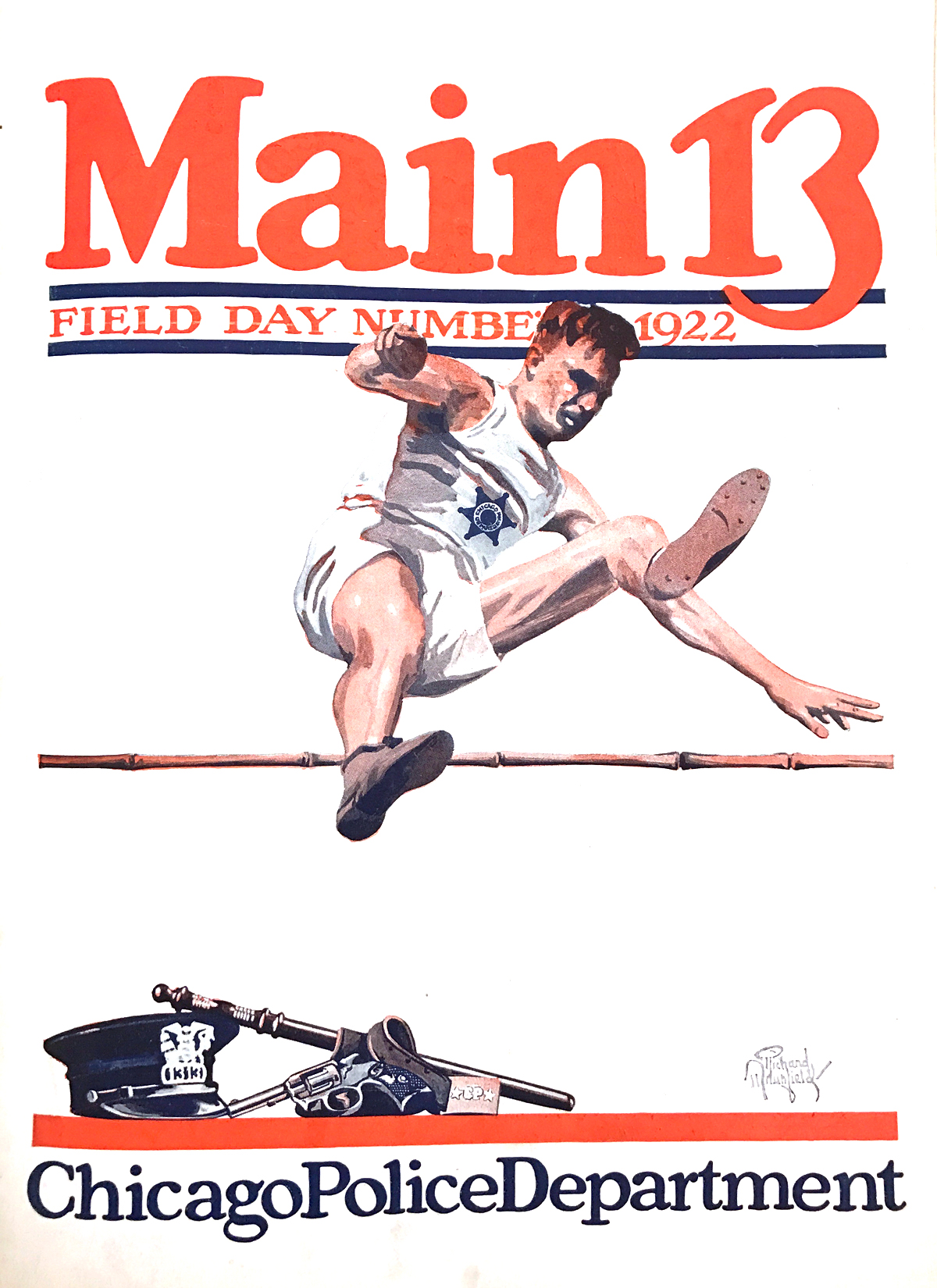 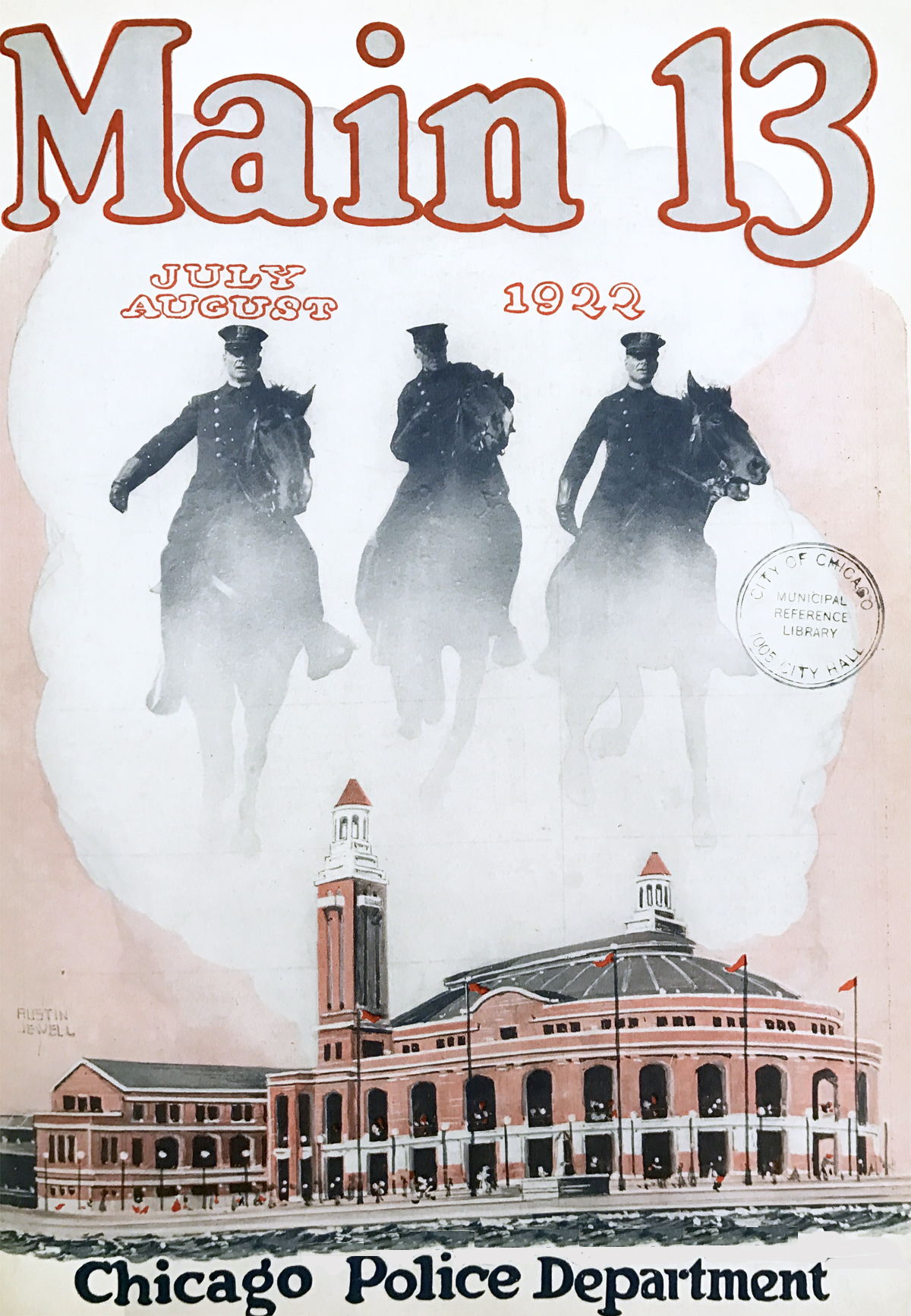 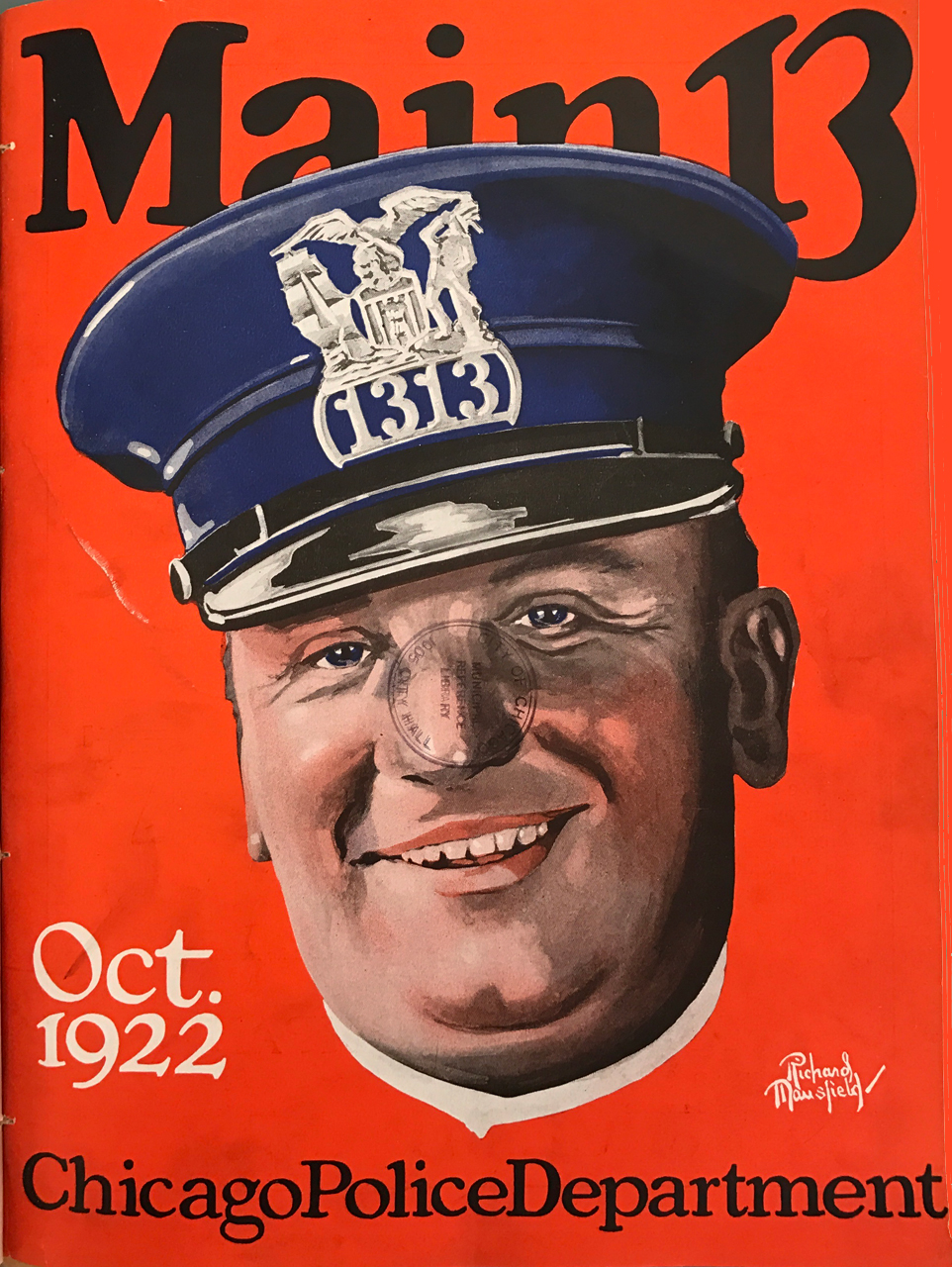 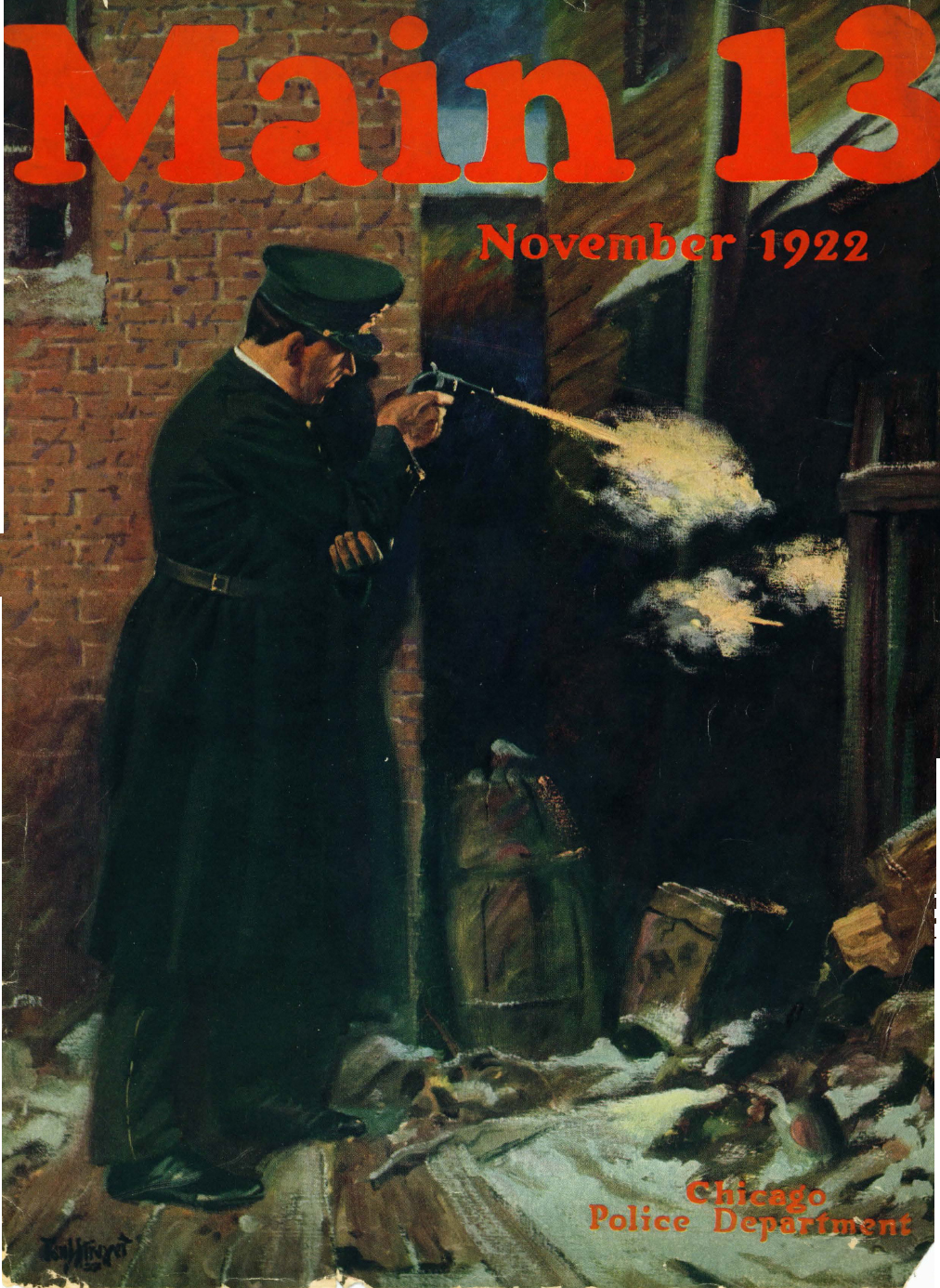 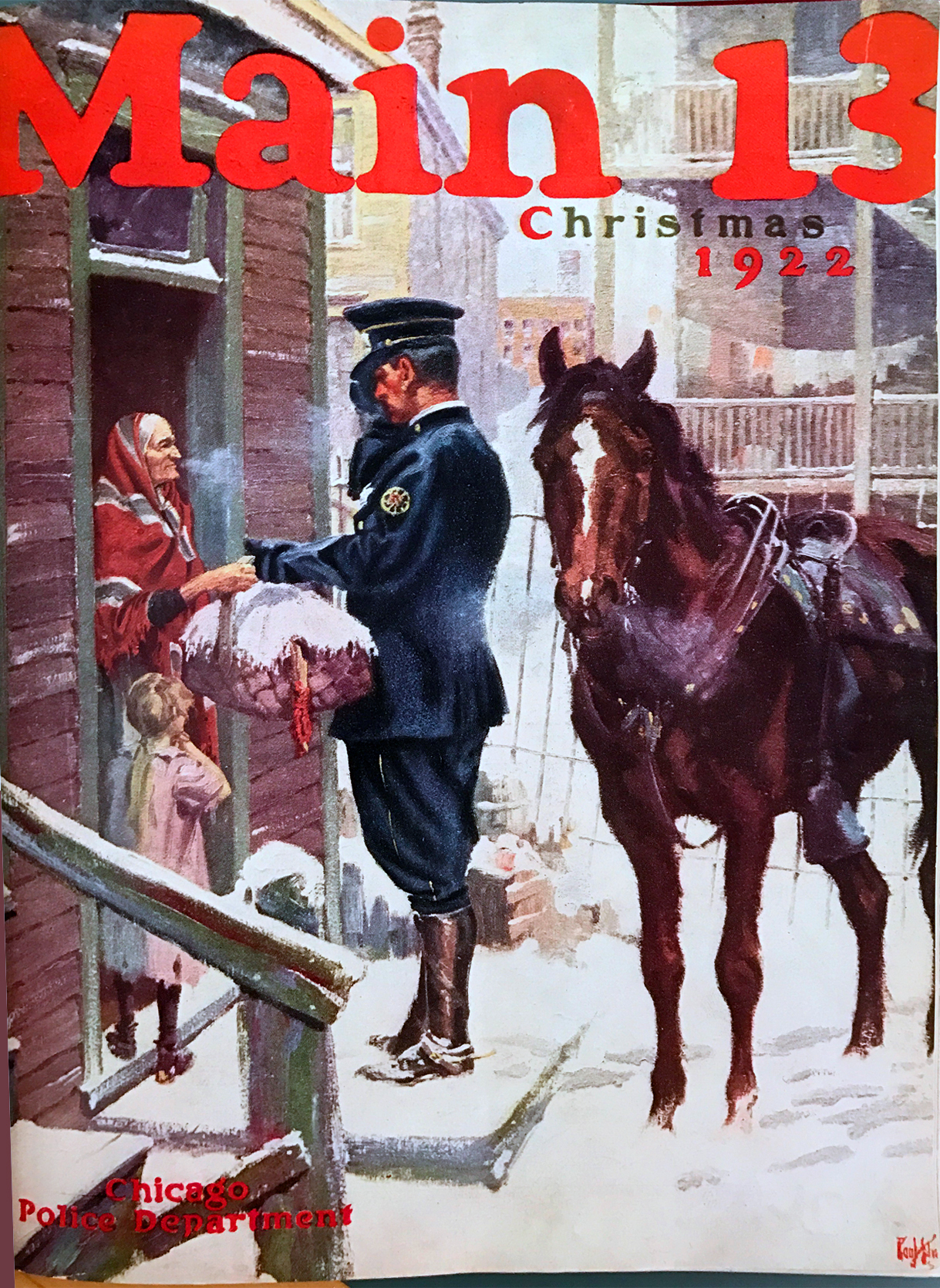 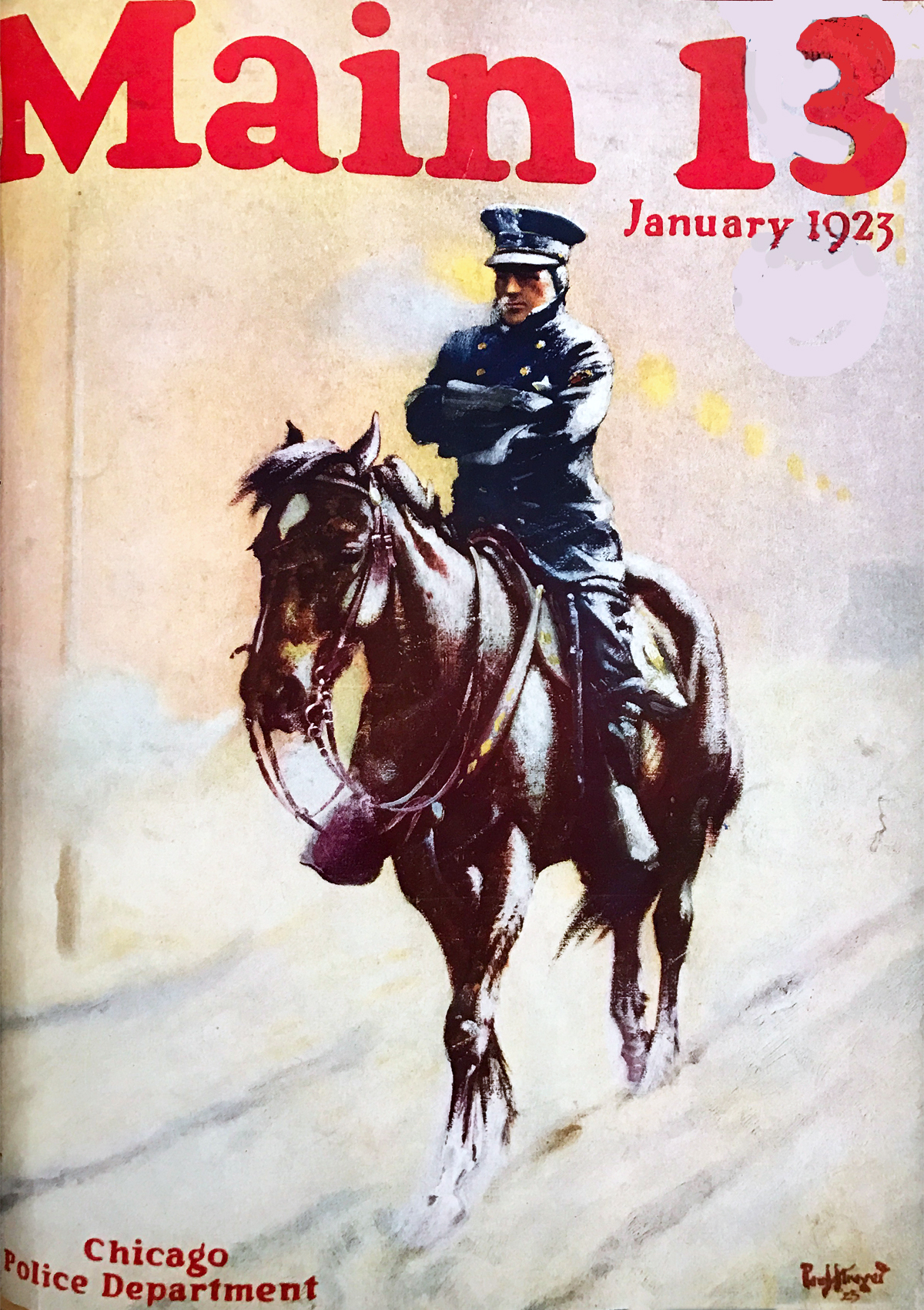 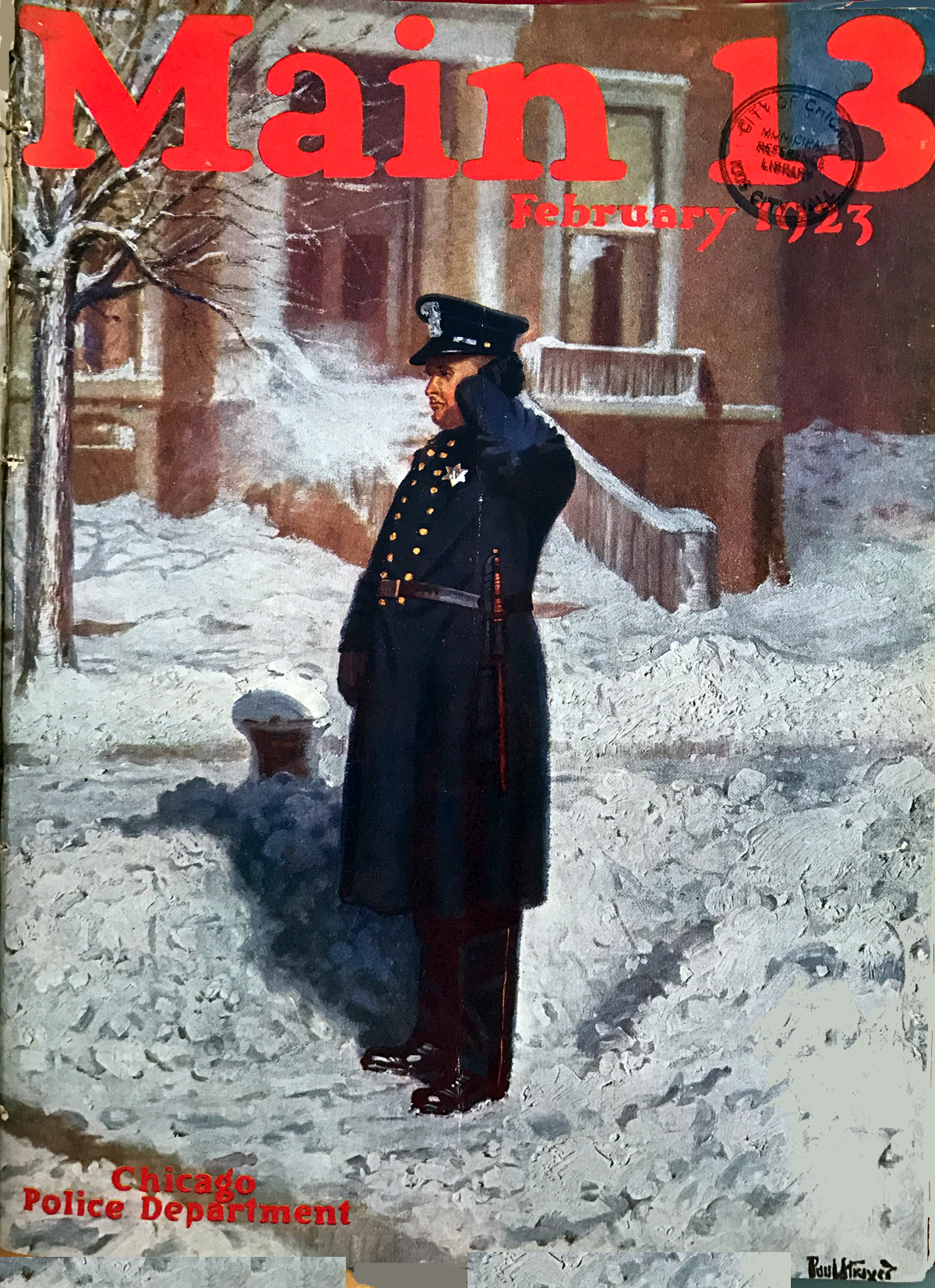 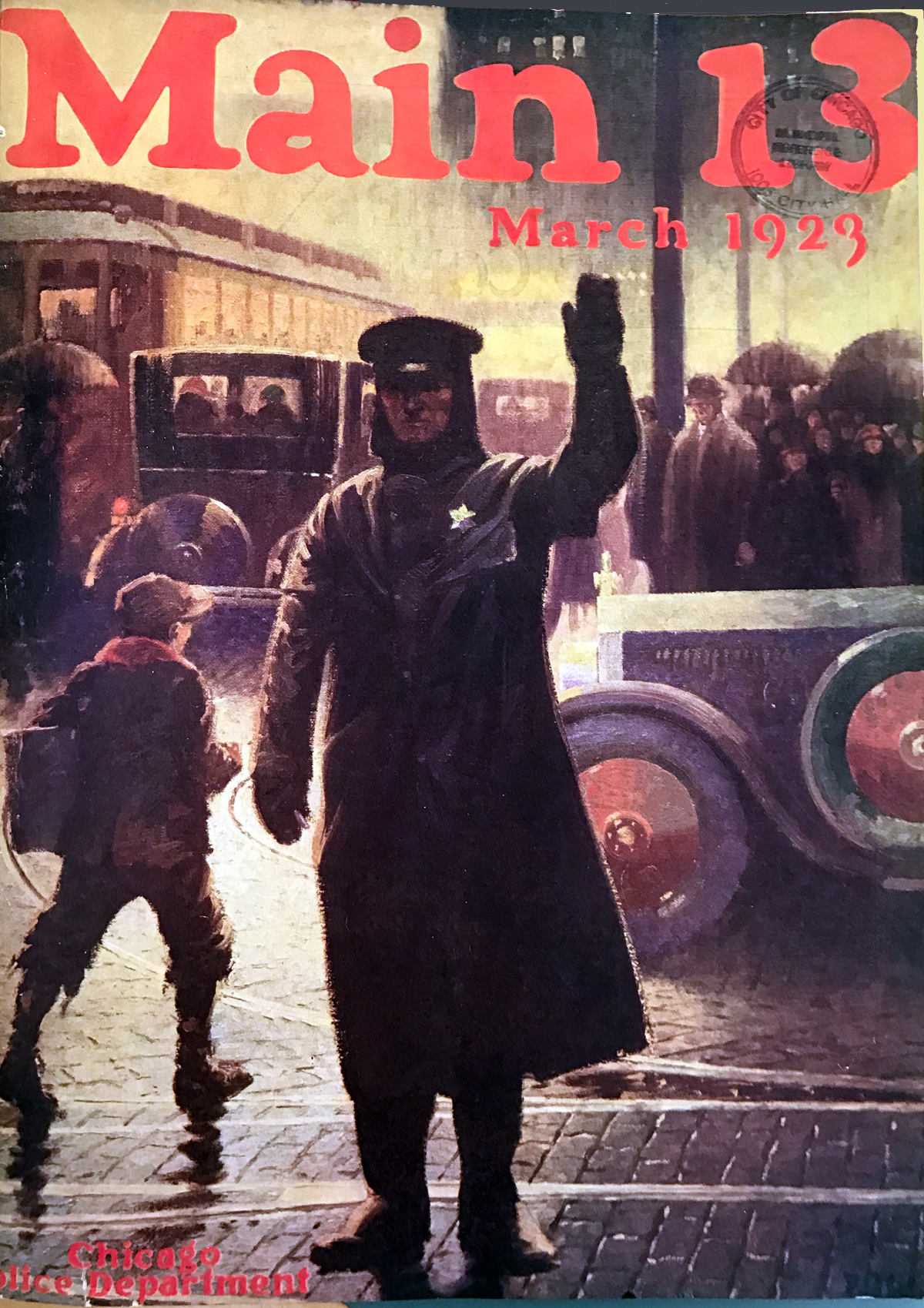 Girl Locked in Office Is First to Try Her Emergency Number—
It Worked O. K.

Police 1313, the new emergency number to summon our constabulary was given its first tryout Tuesday night, and found O. K. Muss Josephine Trialo, 364 Townsend street, was the caller. No yegg, dip, or bandit person was responsible. She had merely been locked in an office at 317 West Adams street, and wanted to go home. 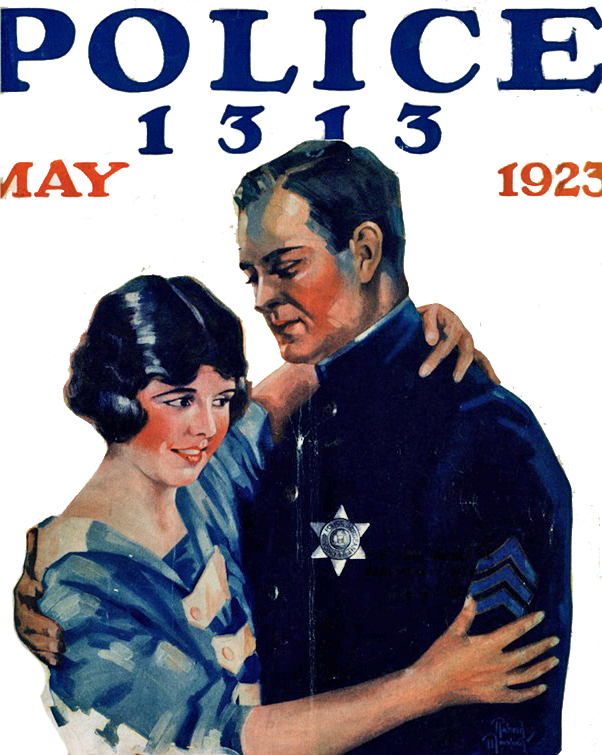 Walter Wright, editor of the police magazine. Police 1313, is to appear in the Felony court today to aid prosecution of Joseph Hirsch, 26 years old, 2302 North Long avenue, a solicitor for the publication, who is charged with obtaining money under pretenses. The arrest was made after an inquiry conducted by the Policemen’s Benevolent association. Hirsch Is accused of having posed as a policeman in getting advertisements. Wright said he would assist prosecution of Hirsch.