Back to Chicago Police 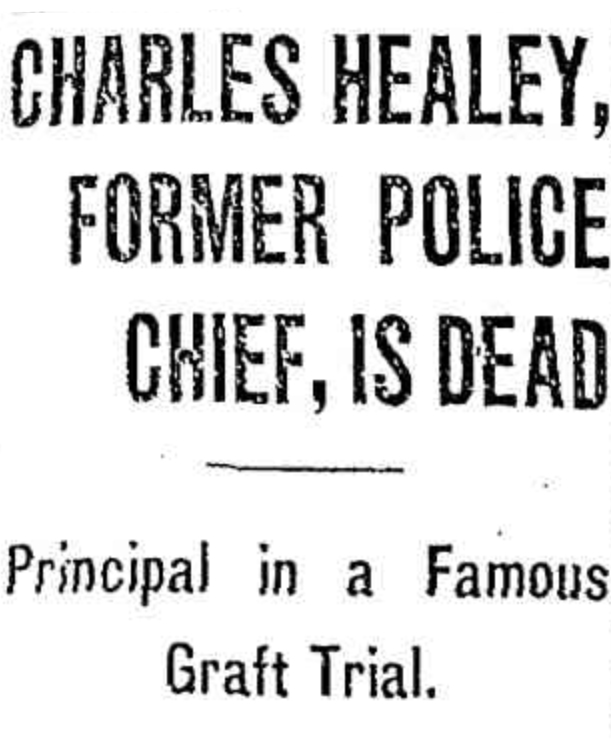 Charles C Healey, chief of police for the first two years of William Hale Thompson’s first term as mayor and and principal defendant in a celebrated graft trial six years ago, died yesterday after a lingering illness at the home of his son-in-law, Walter Hedrick, 6225 Woodlawn avenue.

The former police official was 69 years old and is survived by his widow, Mrs. Nellie Healey, and a daughter, Mrs. Hendrick.

According to attending physicians, Healey’s death was due to a complication of ailments reaching back over a period of seven years. He never permanently rallied from a stroke of paralysis in February, 1918, at the conclusion of his trial in Criminal court, it was stated.

Noted Traffic Expert.
For nearly thirty years prior to his becoming enmeshed in a maze of graft charges in connection with his administration as general superintendent of police, Healey was known as an outstanding officer of the police department. He was regarded as one of the leading traffic experts in the country, and was founder and first commander of the department’s traffic division.

On Oct. 23, 1916, Healey was indicted by a special grand jury on charges of criminal conspiracy malfeasance in office, graft, extortion, and omission of duty.

A year later Healey, along with William Skidmore, west side politician-saloonkeeper, and Detective Sergeant Stephen J. Barry, now a lieutenant, was brought to trial. After a bitter three months’ legal battle in Judge Sabath’s court, all three defendants were acquitted.

Indictments Nolle Prossed.
Immediately afterward Hoyne announced a determination to bring Healey back into court on other indictments still pending, but upon testimony of physicians employed by the state to the effect that Healey was physically unable to appear, these charges were nolle prossed.

Healey was born in 1856 and began his career in 1888 as a lieutenant in the old Town of Lake. He was made a captain of Chicago Police in 1906. Appointment as chief came with the election of Thompson in 1916.

Funeral arrangements had not been announced last night.

HETHER THE SPECTACULAR ARREST of Chicago’s Chief of Police “marks the end of the control of the Chicago Police Department by an organized band of the worst criminals operating in this country,” as State’s Attorney Maclay Hoyne declares, or is merely, as the other side contends, the outrageous culmination of a political feud, the courts must decide. “The production of the evidence will establish my innocence so firmly that there will not be a shadow of doubt of it,” confidently predicts Chief Healey, whose arrest, declares his counsel, is “a damnable outrage.” Mr. Hoyne, on the other hand, is no less emphatic in his assertion that Mr. Healey “has been nailed hard and fast as the head of the vice graft ring which levied tribute on the underworld of the West Side.” 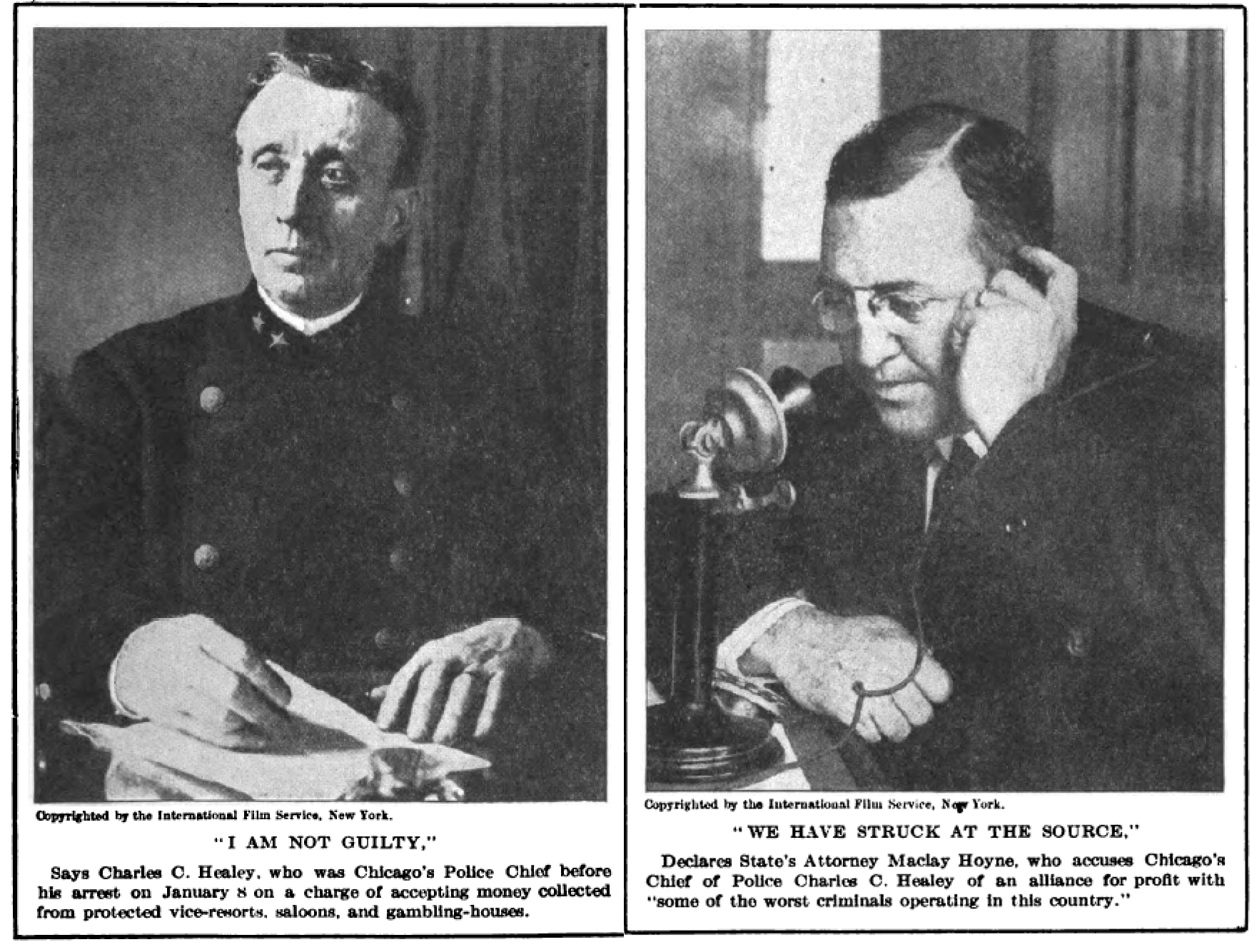 “There will be no truce,” he adds; “this cleaning-up process is going to continue straight to the end.” Meanwhile, the official allegation that the Police Chief of our second largest city was himself part of a great conspiracy to violate the law he was sworn to uphold is a fact to challenge the attention of the whole nation. For, as the secretary of the Citizens’ Association of Chicago remarks, “if criminals of the worst type can operate without fear of punishment because they are in league with the guardians of the law, the very vitals of civic government are in danger.” The story to date, as gathered from the news columns of the Chicago papers, is as follows:

After many months of investigation, in which he had the assistance of the Citizens’ Association of Chicago, State’s Attorney Hoyne, on the night of January 8, threw a bomb into what he called “the inner circle of corruption in the Police Department” by arresting Chief of Police Charles C. Healey on a charge of accepting graft collected from protected vice and saloon interests. Among others arrested at the same time on charges of extortion, conspiracy, and bribery were . Thomas Costello, described by Mr. Hoyne as “the operating head and chief agent of the combination,” and Police Lieutenant A. M. White, both of whom are reported to have confest. “I believe we have struck at the source of the system,” declares Mr. Hoyne, who goes on to say in the columns of the Chicago Herald:

It has been a filthy combination of crooks, including almost every type of criminal known, from burglars, pickpockets, safe blowers to backmailers, firebugs, and extortionists. The Chief of Police and men associated with him have been in deliberate conspiracy with the vilest elements in Chicago.

Nor does the State’s Attorney hesitate to place some of the blame on the shoulders of Mayor Thompson, who, he says, knew that there was corruption in the Police Department, yet “obstructed at all times and in every way my efforts to bring crooked police officers, including the Chief of Police, to justice.” The Mayor, on the other hand, says that if there is corruption in the Police Department “no one can blame me,” because under the statutes of the city of Chicago “the Mayor is not responsible for the Police Department or its conduct.” He further states that “since I have enforced the Sunday-closing law every means has been used by the whisky ring to obstruct me, and this looks like another move of the same interests.” “The whole thing would be ridiculous were it not for the pain it causes,” declares Mr. Healey, who from the beginning has asserted his absolute innocence. In a statement quoted in the Chicago Tribune he says:

The production of the evidence will establish my innocence so firmly that there will not be a shadow of doubt of it. If it were not for the instructions of my attorney I might tell you now what a part of that evidence is, but he forbids me to talk.