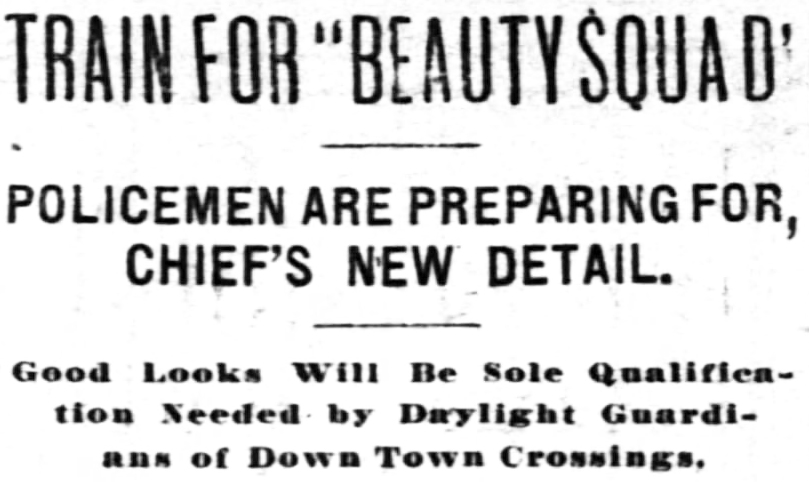 The announcement that Chief Collins will be in the near future appoint by special warrant a “beauty squad” of 100 policemen to patrol the downtown district during the daylight hours has caused a flutter of excitement to the force from Rogers Park even into Hegwisch. Every roll call is a dress parade nowadays, and the excitement will not die down until the selections finally are made.

Good looks will be the sole qualification, the term applying also to the apparel of those men taken under advisement by the chief.

Some of the Requisites.
Here are some of the details insisted upon by the front office:

Must be tall, the nearer six feet the better.
Ought to have a mustache, but no whiskers.
Should not weigh more than 220 nor less than 145.
Must brush clothing carefully before coming on duty. (Officers may leave busy crossings at intervals to clean up in near by alleys.)
Celluloid collars must be washed at least twice a week, and daily where circumstances permit.
Gloves shall be worn in order that policemen may take the hands of women while assisting them without violating laws of propriety.
Must learn to pose in easy, graceful attitudes in order that visitors to the city may return to their homes praising the Chicago “cops.”
Must refrain from interfering with truculent teamsters, as a personal combat might disarrange the clothing of the officer. 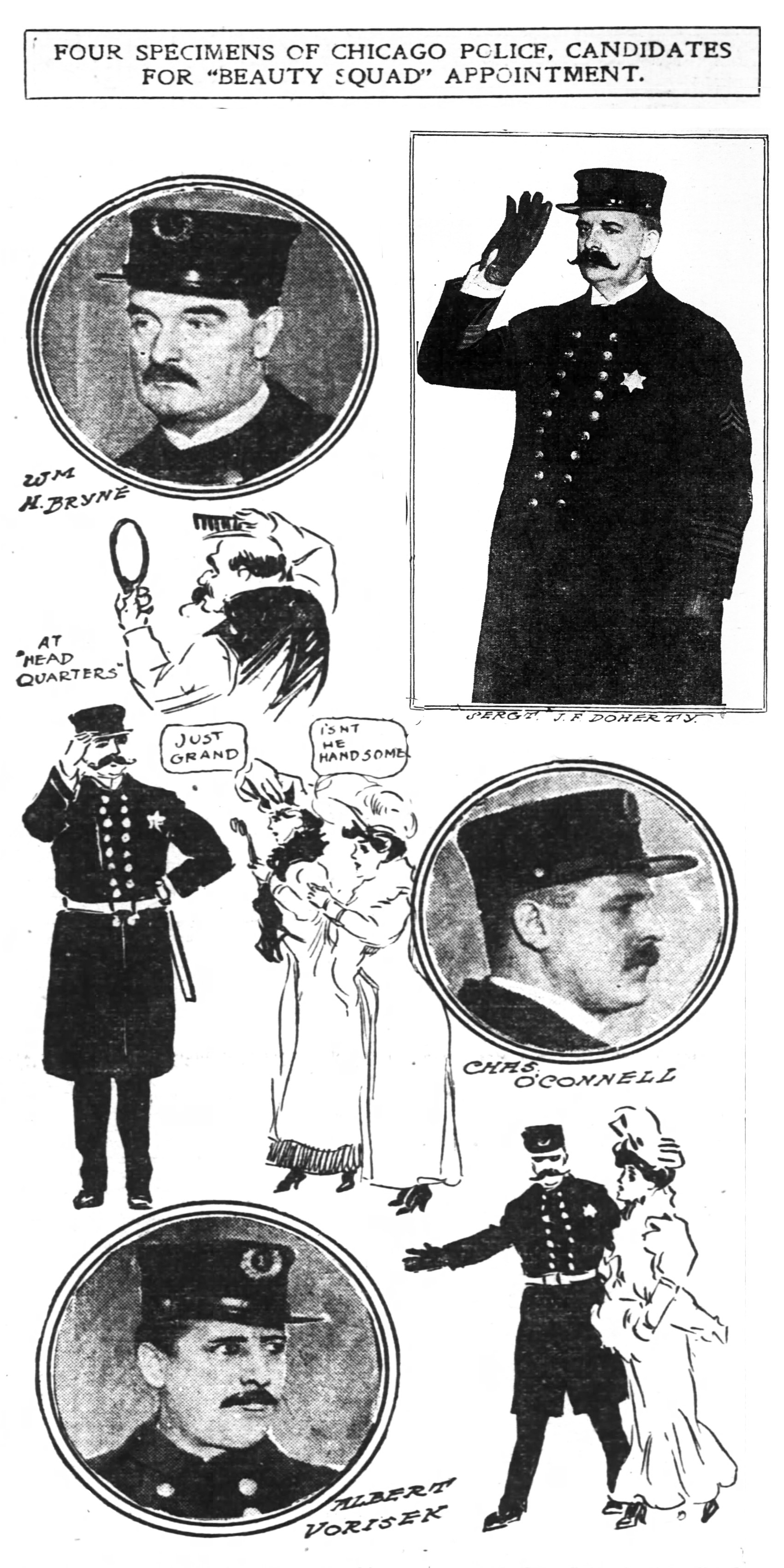 To Be Relieved in Rainy Weather.
At night and on rainy days it is said that the “beauties” will be relieved of duty and the ordinary run of rough-and-ready coppers placed on the street.

A careful poll of the down town district yesterday revealed the fact that at least four men now inside the loop may hold their places in spite of the fact that they are first class “coppers.”

Sergeant J. F. Dohertuy and Patrolmen William H. Byrne, Albert Vorisek, and Charles O’Connell are good enough to regulate the traffic on any street in America, and at the same time they are as smart in appearance as West Pointers. 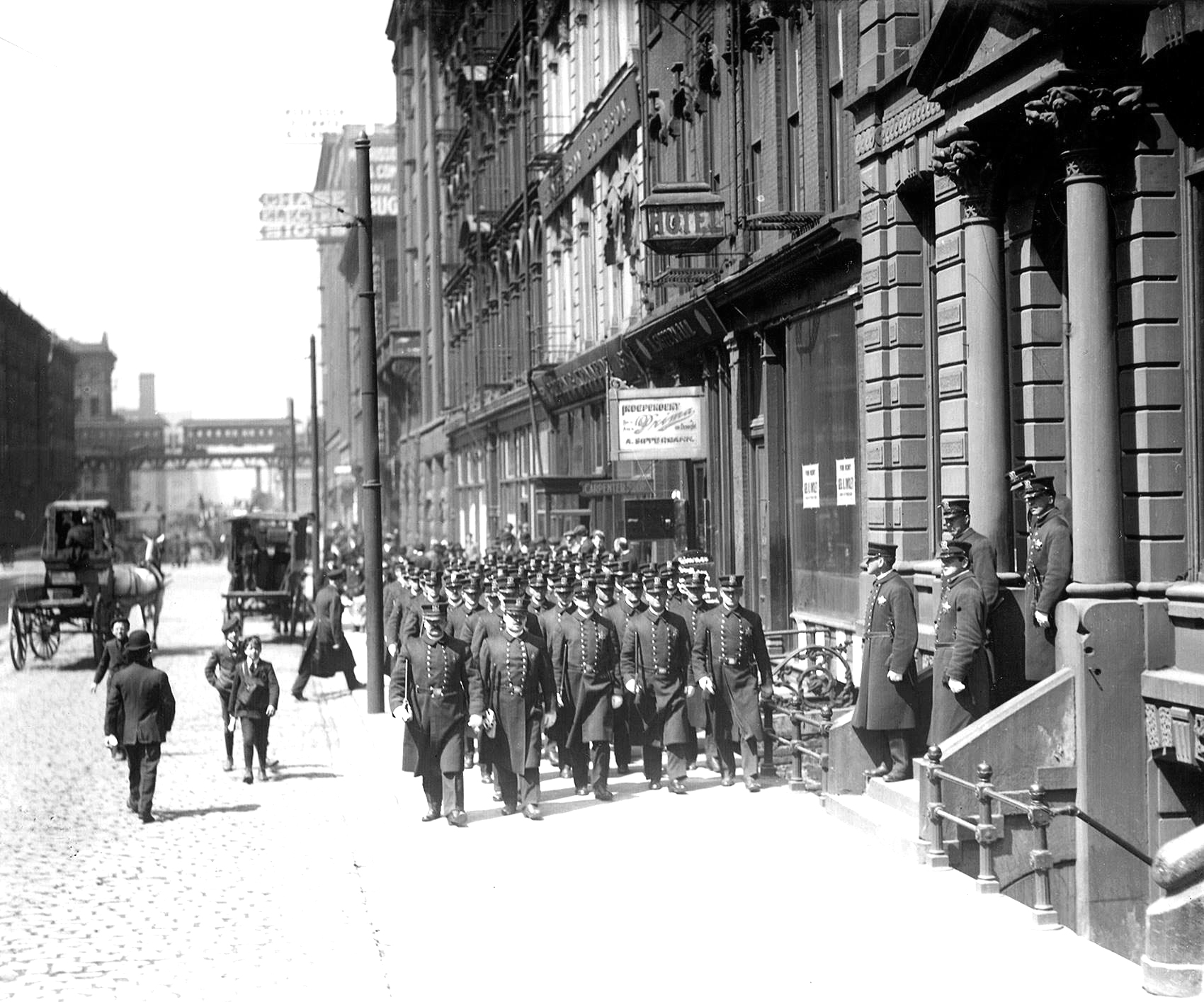 An addition has been made to Chief Shippy’s “beauty squad.”

John Farson1, millionaire banker, father of Oak Park, and acknowledged, even by himself, to be the best dresser in Chicago, is now a full fledged “copper.”

He was selected by Chief Shippy as a member of his personal staff.

A nice big star, just the same sort as the other “coppers” wear, is now pinned on the lapel of the millionaire’s coat. He is allowed to carry a real blue-steeled six-shooter and a “billy.”

It is said that Chief Shippy added Mr. Farson to his force in order to instruct the “beauty squad” further in questions of dress. For some time he has been troubled with the “beauties” reporting with smoke-specked collars and vari-colored hosiery. Worried almost to distraction, he sent for the Oak Park fashion plate.

It is said that Mr. Farson’s duties will consist solely in appearing once a day at headquarters attired in his military white suit, snow white tie, white shoes, and white hosiery.

Policeman Farson when asked concerning his appointment demurely acknowledged that he was “it.”

“I am a real policeman,” said the millionaire proudly.

And then, throwing back his coal lapel, he “flashed” his silver star.

“Just read it if you don’t believe it,” he said, and then he read “member of chief’s staff.”

“What are your duties?” was asked.

“I don’t know for sure,” said the policeman, doubtfully. “I think it must be to take care of thr Methodists in Oak Park.”

“Have you made any arrests yet?”

“No, not yet, I have been watching the career of Policeman Moor in Glencoe. I like the manner in which he uses his gun, but my, his tie is not red and is not tied right.”

“Would you work on the traffic squad if you were ordered to?” was asked.

“Well—er—well, now you see,” and then he glanced down at his snow white broadcloth suit and white shoes. He didn’t finish his answer.

And meanwhile Oak Park is joyous. The suburb has a real protector in its midst.

That no person while on the public streets or ways of the city, or any street or elevated railway car running from point to point within the city, nor any elevator operated in any building in the city to which the public is admitted, shall wear any hatpin the exposed point whereof shall protrude more than one-half inch from the crown of the hat, in upon, or through which such pin is worn.

Any person violating the provisions of this ordinance shall be subject to a fine of not less than $50.

There is nothing to prevent the woman from wearing corks over the point of longer hatpins.

Chief McWeeny announced yesterday that he expected to appoint a real “beauty squad” as an addition to his regular police force. The new “coppers” are to be women who want to see the long hatpin ordinance enforced.

1 John Farson was the president of the Chicago Automobile Club in 1904.