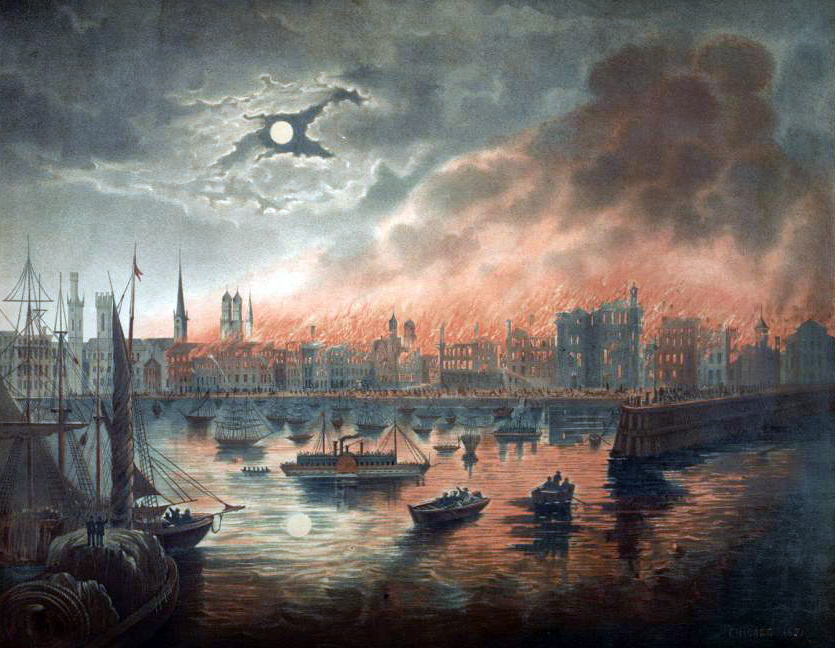 Buildings Damaged
Many of the buildings destroyed were models of their kind. Among them was the Tribune office, which was probably one of the most complete and elegant newspaper establishments in the world. It was completed in 1869 at the cost of $225,000. The machinery, including two eight-cylinder presses, and several folding machines added another $100,000 to the loss. It was located on the southwest corner of Dearborn and Madison streets.

The Crosby Opera House was just about to be re-opened on Monday following an intense $80,000 renovation during the summer and fall. It was lit up for the first time a mere one to two hours before the fire. It was a gorgeous auditorium and it’s frescoes were exquisitely beautiful. The carpet and upholstery were made expressly for it in France. It fronted State and Washington streets.

Placed in between Dearborn and State streets along Madison street was McVicker’s Theatre which was probably one of the coziest as well as handsomest dramatic establishments in the country. Similarly, it had been closed for a major renovation over the summer and had been open for just a few weeks.

North Division
1,300 acres destroyed including:
10,000 buildings including over 600 stores and 100 manufacturing establishments

In the first year after The Fire, more than eight miles of street frontage had started construction. Proof that the lesson of safe construction had been learned, the materials used tells the story – 965 were brick, 200 of stone, 20 of iron and only 65 of wooden frame. In height they ranged rather evenly from one to four stories, with 88 five-story, 10 six-story and one seven-story structures. The Green Door Tavern, located on the southwest corner of Orleans and Huron Streets, was the only one of the few balloon frame buildings built immediately after the Fire that still remains.

Buidings that survived, but are still standing today are the Water Tower and the Unity Church, built in 1869, though had extensive damage, was rebuilt. In 1911, the building was purchased by the Scottish Rite, part of the Masons fraternal order, for $125,000. The building is now part of a new 40 story condominium project.

A number of vessels in the Chicago River, at the time of the fire, escaped by being towed up the North Branch, but the following were destroyed:

The Chicago Tribune stated that the 3 vessels, the Eclipse, of Racine, the Valetta of Canada, and the Fontanelle, of Milwaukee, which were lying at the Clark St. bridge, were pumped dry, and scow Evergreen, with a steam engine on board, having been towed alongside for that purpose, large tanks are to be placed in each vessel which, when pumped out were used to raise the vessels, it took about 3 weeks.