The firm of Rand, McNally & Co., printers, engravers, electrotypers and map and book publishers, takes its origin from a printing establishment opened in 1856 at No. 148 Lake Street by William H. Rand, who was the senior member of the firm. Mr. Rand in 1860 consolidated his office with the Tribune job department at No. 51 Clark Street and assumed the superintendency. In this capacity he continued for eight years when he and Andrew McNally with others formed a partnership to establish a printing and publishing house under the firm name of Rand, McNally & Co. In 1879 the firm was incorporated as a stock company with a capital of $200,000 under the same name and it has since then assumed such proprtions that it is now one of the largest printing houses in the country. 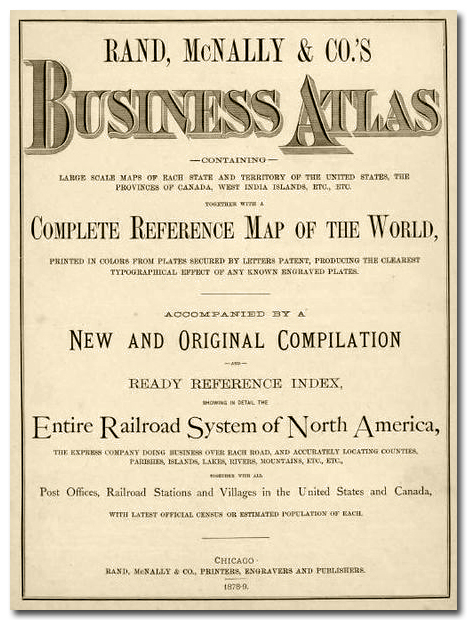 During the Great Chicago Fire in 1871, Rand McNally’s headquarters at No. 51 Clark Street was burned out, but, according to company lore, they had two of the company’s printing machines buried in a sandy beach of Lake Michigan, and the company was up and running again only a few days later at No. 108 West Randolph Street, near Desplaines. In 1873, the company moved into its own quarters at Nos. 79-81 Madison Street. This becoming too restricted the firm erected a new building on East Monroe street, and later outgrowing this they have now completed a large structure at the junction of Clark, Harrison and LaSalle streets. This is ten stories high and of the latest type of fireproof construction. Mr. Rand withdrew from the company some twenty years earlier.

The very first Rand McNally map, created using a new cost-saving wax engraving method, appeared in the December 1872 edition of its Railroad Guide. Rand McNally became an incorporated business in 1873, with Rand as its president and McNally as vice president. The Business Atlas, containing maps and data pertinent to business planning, was first published in 1876. The atlas is still updated today, now titled the Commercial Atlas & Marketing Guide. The Trade Book department was established in 1877, publishing such titles as The Locust Plague in the United States. Rand McNally began publishing educational maps in 1880 with its first line of maps, globes, and geography textbooks, soon followed by a world atlas. The company began publishing general literature in 1884 with its first title, The Secret of Success, and the Textbook department was established in 1894 with The Rand McNally Primary School Geography. Also in 1894, the company opened an office in New York City headed by Caleb S. Hammond, who later started his own map company.

Between 1882 and 1891 Rand McNally produced “elephant-size” maps at the scale of 1:506,880 or 1 inch to 8 miles, in twelve panels which formed a map more than 10 x 15 feet in size. The several editions of the map, which depicts the country from the East Coast to the 105th meridian of longitude, are entitled Rand McNally & Co’s New Railroad Junction Point and County Map of the Eastern & Middle States Prepared from Latest Government Surveys, and Verified by the Working Time Tables of the Various Railroads. Drawn, Engraved, Printed, Colored by Hand and Published by Rand, McNally & Co., Chicago. It shows county boundaries, all railroad junctions, and all railroads. This is probably the map which George H. Heafford stated was “frequently posted on the out-houses, dead-walls and fences of our large cities.”

Rand McNally was the first major map publisher to embrace a system of numbered highways. One of its cartographers, John Brink, invented a system that was first published in 1917 on a map of Peoria, Illinois. In addition to creating maps with numbered roads, Rand McNally also erected many of the actual roadside highway signs. This system was subsequently adopted by state and federal highway authorities. The oil industry quickly developed an interest in road maps, enticing Americans to explore and consume more gasoline. In 1920, Rand McNally began publishing road maps for the Gulf Oil Company, to be freely distributed at its service stations. By 1930, Rand McNally had two major road map competitors, General Drafting and Gousha, the latter of which was founded by a former Rand McNally sales representative. The Rand McNally Auto Chum, later to become the ubiquitous Rand McNally Road Atlas, was first published in 1924. The first full-color edition was published in 1960. It became fully digitized in 1993.