From mid to late 19th century, the Chicago saloon keeper was usually a man that sported superior intelligence who often directs his customers’ thoughts. He had in his possession the latest political and sporting news. He who can win and tell the best story is, not by election, but by virtue of fitness, the leader. The saloon is, in short, the clearing-house for the common intelligence—the social and intellectual center of the neighborhood. At least that’s how a sociologist from 1900 explained it.

The following table, made by a careful investigation of each of the 163 saloons of the seventeenth ward in 1900—a fairly representative ward of the working people—shows some of the attractions offered by these saloons:

Ward Map in 1900 showing the location of the 17th Ward

These saloons are actually working man’s clubs. That same instinct in man which leads those of the more resourceful classes to form such clubs as the Union League Club, or the Marquette Club; which leads the college man into the fraternity, leads the laboring men into the clubs furnished them by the saloonkeeper, not from philanthropic motives, but because of shrewd business foresight. As you step in, you find a few men standing at the bar, a few drinking, and farther back men are seated about the tables, reading, playing cards, eating, and discussing, over a glass of beer, subjects varying from the political and sociological problems of the day to the sporting news and the lighter chat of the immediate neighborhood. Untrammeled by rules and restrictions, it surpasses in spirit the organized club. That general atmosphere of freedom, that spirit of democracy, which men crave, is here realized; that men seek it and that the saloon tries to cultivate it is blazoned forth in such titles as ”The Freedom,“ “The Social,” “The Club,“ etc. Here men ”shake out their hearts together.”

Saloon Keepers Rarely Honored.
During Chicago’s massive annexation years near the turn of the century, Chicago inherited several schools. On April 26, 1904 it was revealed after a secret investigation that three Chicago Public Schools were named after saloon keepers. The Board was appalled and almost immediately voted to have new names chiseled in the buildings.

“There is a strong feeling among board members that this Is wrong,” declared a school trustee, “and steps will be taken to have the schools properly named It is not good for the morals of the children to attend a public school named after a saloon keeper. It brings the liquor selling business too close to the child’s life.”

Trustee Ole A. Thorp, chairman of ths committee on the naming of schools, said he would support the resolution.

“Any school named after a man now engaged in the business of selling liquor,” he said. “should be changed. I am most heartily In favor of such a movement, although there is such a thing as an honorable saloon keeper, and in taking this action the board should be careful not to try to place the liquor business in disrepute.”

District Supt. Albert G. Lane declared that the schools bearing the names of saloon keepers were named before they were a part of the city system. 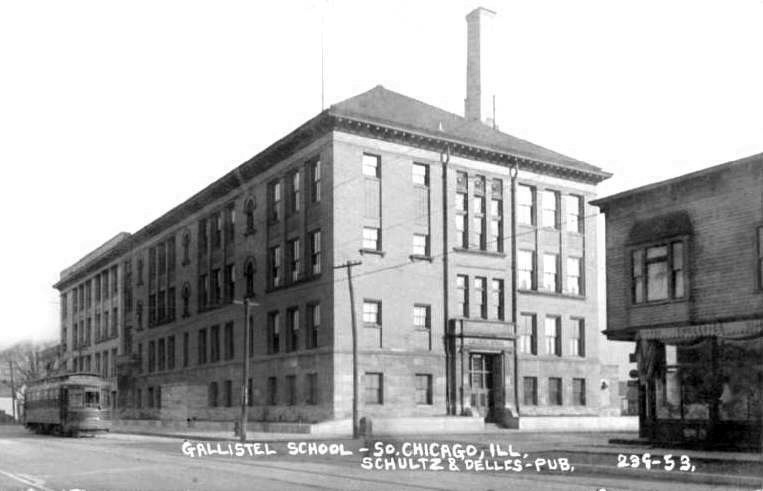 “They were named by the school trustees of the different towns prior to their annexation,” he said. “and there are three such schools. One Is the Gallistel, Ewing avenue near One Hundred and Fourth street. which was named after Matthew W. Gallstel, 180 One Hundred and Sixth street. Another is the O’Toole school. Forty-eighth and Bishop streets, named for Luke O’Toole, who resided at 4724 Halsted street. The third school named after a saloon keeper Is now a branch of the Seward school, The Buckley, at South Hermitage avenue and Forty-third street.”

By the end of 1904 these schools’ names have been changed as follows:

The new names were chosen with care. William Mavor was a building contractor who also served as the 6th ward alderman. John Henry Hamline (1856–1904) was a prominent Chicago lawyer.

There can be some questions in regards to this “research” that was performed as two of the three men that the schools were named after were in fact, very popular in their areas.

In 1854 Matthew Gallistel settled in Chicago. He was a prominent member in the Southeast Side of Chicago. He succeeded J. Bremer as Postmaster of the Postal Service in 1880. With this he carried on a real estate and fire-insurance business. In 1863 he married Miss Marie Duschek and had five children.
While president of South Chicago Board of Education a school was erected and named after him.

Luke O’Toole was listed as the assessor for the Town of Lake in the 1887 Lakeside Directory of Chicago.

The third, J. Buckley, owned a grocery store near John Buckley’s State street saloon at 4072 S. Dearborn. Not certain if these two were the same person, but what are the odds if they weren’t?.

The Wronged Have Been Righted
However, it seems that these changes were never made, or if they were, it was for a very short time.

The Seward Communication Arts Academy is still at the same location when it was built in 1896 on the corner of 46th and Hermitage. Not one mention of the name “Buckley.”