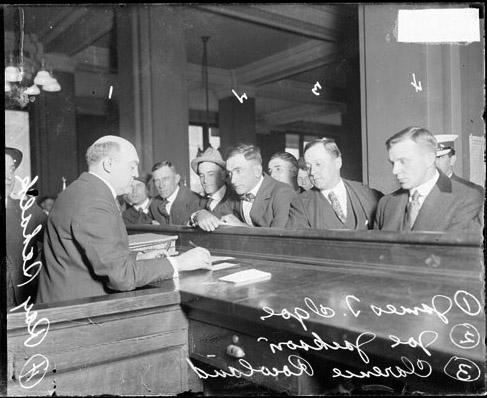 INTRODUCTION
On May 18, 1917, Congress passed the Selective Service Act of 1917, requiring men 21 to 30 years old to register for the draft. Exemptions were granted to men with dependent families, physical disabilities, or indispensable duties at home. The newspapers were supporting a case that baseball players were indispensable in that rosters should remain intact because baseball was patriotic.

A nationwide Army Registration Day, held on June 5, 1917. For baseball’s part, however, two weeks before Registration Day, National League president John Tener wrote to the NL club owners opining that he felt “no obligation, either fixed or moral, that we should depart from our daily routine of business” of playing scheduled games. Days later the National Commission–comprised of Tener, American League president Ban Johnson, and commission head August Herrmann–asked that each team “co-operate heartily” with the registration event not by postponing games but by ensuring that “bands be engaged to play patriotic music … where games are scheduled on that day.” Those obligated to register could do so from seven o’clock in the morning until nine o’clock that evening, and rather than overplay their patriotism by postponing contests, the commission felt that music would sufficiently convey “public expression of the willingness on the part of major league baseball clubs to serve the country at this vital crisis of its history. 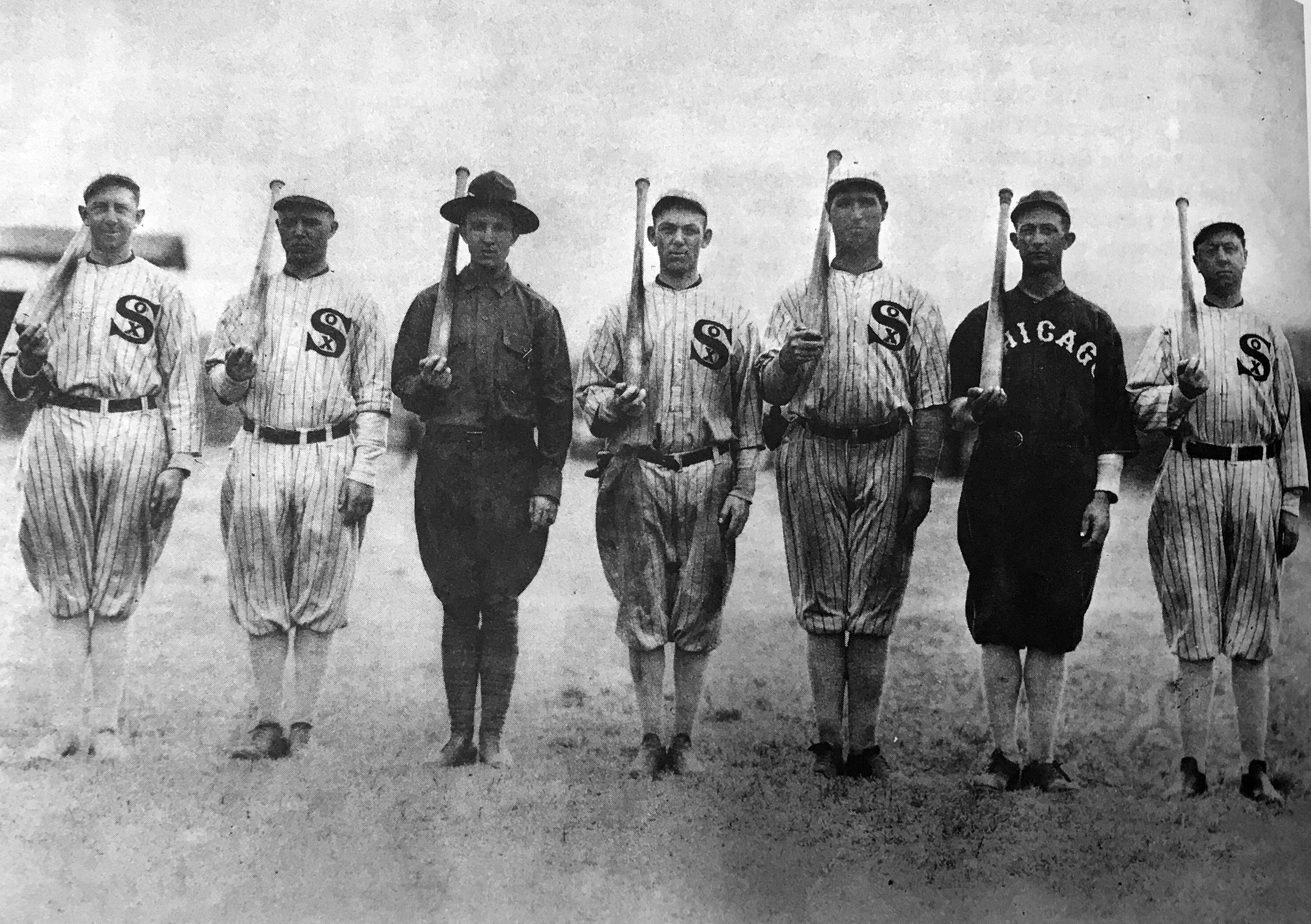 PICKED TO HELP, WITH MILITARY DRILL OF TEAM

The promotions were made just before the end of the daily drill, which was devoted largely to marching evolutions. After putting the athletes through their paces in company formation. Sergt Smiley divided them into five squads and assigned one of the corporals to each squad.

“Assemble” Order Brings Trouble
The new “noncoms” started out bravely and got by in great shape until the order to “assemble” was given, then some difficulty was experienced by the corporals in getting their squads back into original places in line. Scott came closest to it by the about face methods, but found he had the rear in front, that’s all.

Previous to their marching drill the players were taught some more of the manual of arms.

So far advanced are the players In physical condition that Manager Rowland decided to stage a full nine inning game tomorrow afternoon, although the first exhibition game of the trip is not booked until a week from today.

Sox Ready for Hard Work.
Practically all the men are ready to cut loose, however, and the boss figured it would do no harm to pit the Blues and Whites against each other end let them go the route, merely cautioning the pitchers not to attempt any curves.

Admission will be charged to the game ard the receipts turned over to the superintendent of schools here. Today was “Tag day” for the schools, which are in need of a gymnasium and are trying to raise a building fund. After purchasing tags for himself and his family, President Comiskey announced he would make the game tomorrow a benefit for the same fund.

Whites Beat Blues, 4-3.
The game wound up today’s practice was a victory for the Whites, the score being 4 to 8 at the end of seven innings. The weather was so warm Manager Rowland let the rival factions battle for almost the regulation distance. Everybody pulled up tired, but nobody limped.

Williams and Wolfgang did the pitching for the Blues, while Scott and Danforth worked for the Whites. Scott and Williams went through five innings against each other at the start, and each of them tried a bender or two in pinches. Danforth and Wolfgang worked the last two rounds

Lineup of Rival Team.
The Whites had Gandil, E. Collins, Relsberg, and Weaver on the infield anti Eldred, Felsch, and Jackson in the outfield. The Blue infield was composed of Haubrook, Terry. Hartford, and McMullin, with Fournier, Liebold. and Haas in the gardens.

A south wind kept the heat from being uncomfortable, but played havoc with the swatting. as it blew
directly into the faces of the batsmen and frequently filled eyes with sections of the Lone Star state.

White Sox drilling in Army uniforms on the field at Comiskey Park, April 19, 1917. 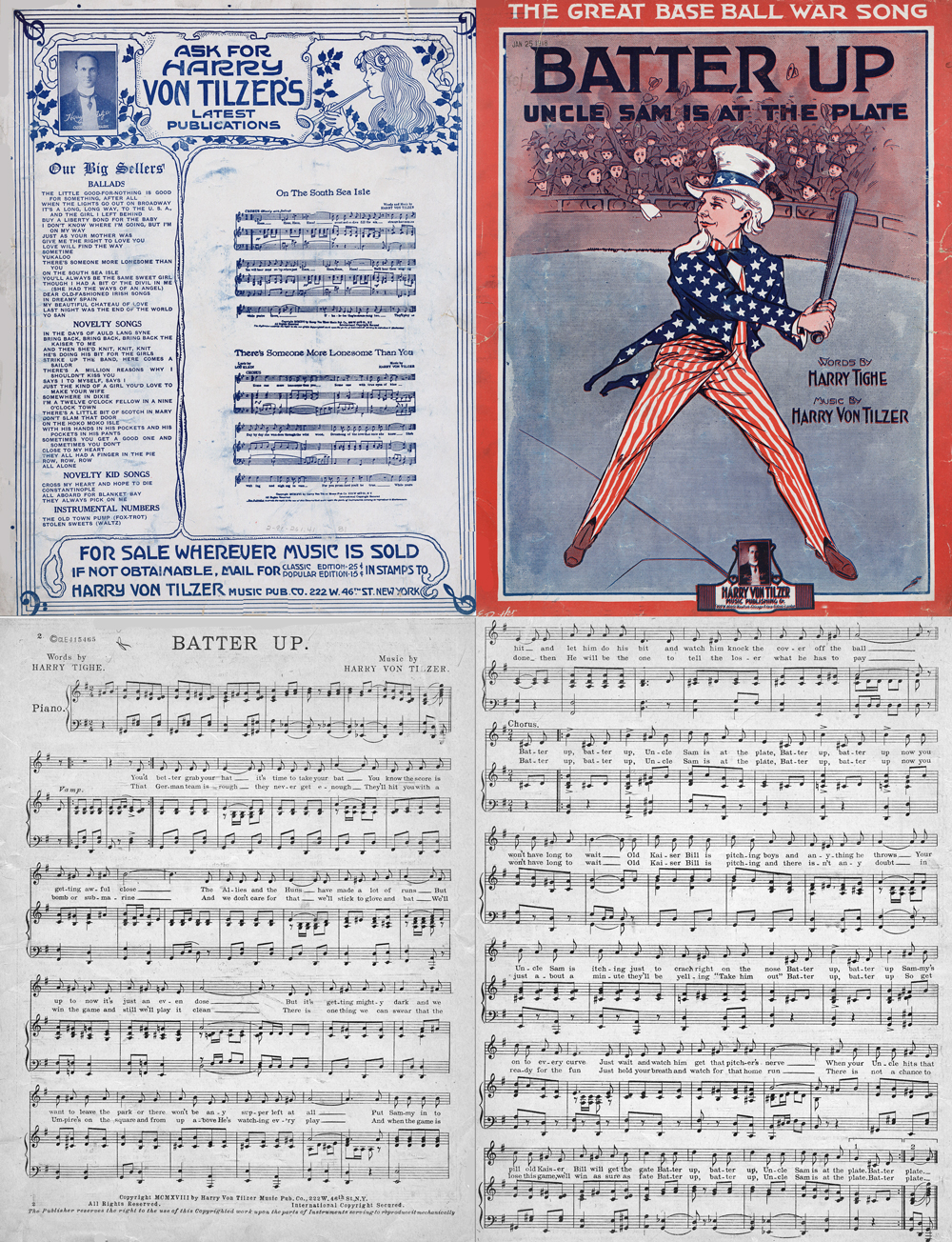 Batter Up! Uncle Sam is at the Plate
Harry Tighe and Harry Von Tilzer
1918

Next Thursday haI been set for the competitive military drill in Chicago in the contest of American league players for the $500 prize hung up last spring by President Johnson for the team that made the best showing as soldiers,

At the request of President Johnson. Maj. Gen. Barry has appointed Col. Raymond Sheldon to act as judge of the contest and decide what team is entitled to the honor and the coin. Col. Sheldon will visit four western cities on different days to see all the American league teams go through their military paces. His schedule will bring him to Chicago on Thursday, which will be “military day,” and will be featured by the drilling of the White Sox and the Washington team in competition for the prize.

President Comiskey of the Sox plans to invite many army notables to be on hand and witness the contest here, and there will be various incidental features, including a band of music and a profusely decorated ball park. The city championship pennant, won by the Sox from the Cubs last fall, aLso wil be christened on Thursday.

The winning of the $500 drill prize carries with it a bonus of $100 to the drill master who has had charge of the successful team this seson. The White Sox say they are going to reward Serg. Stalley by earning the hundred bucks for him.