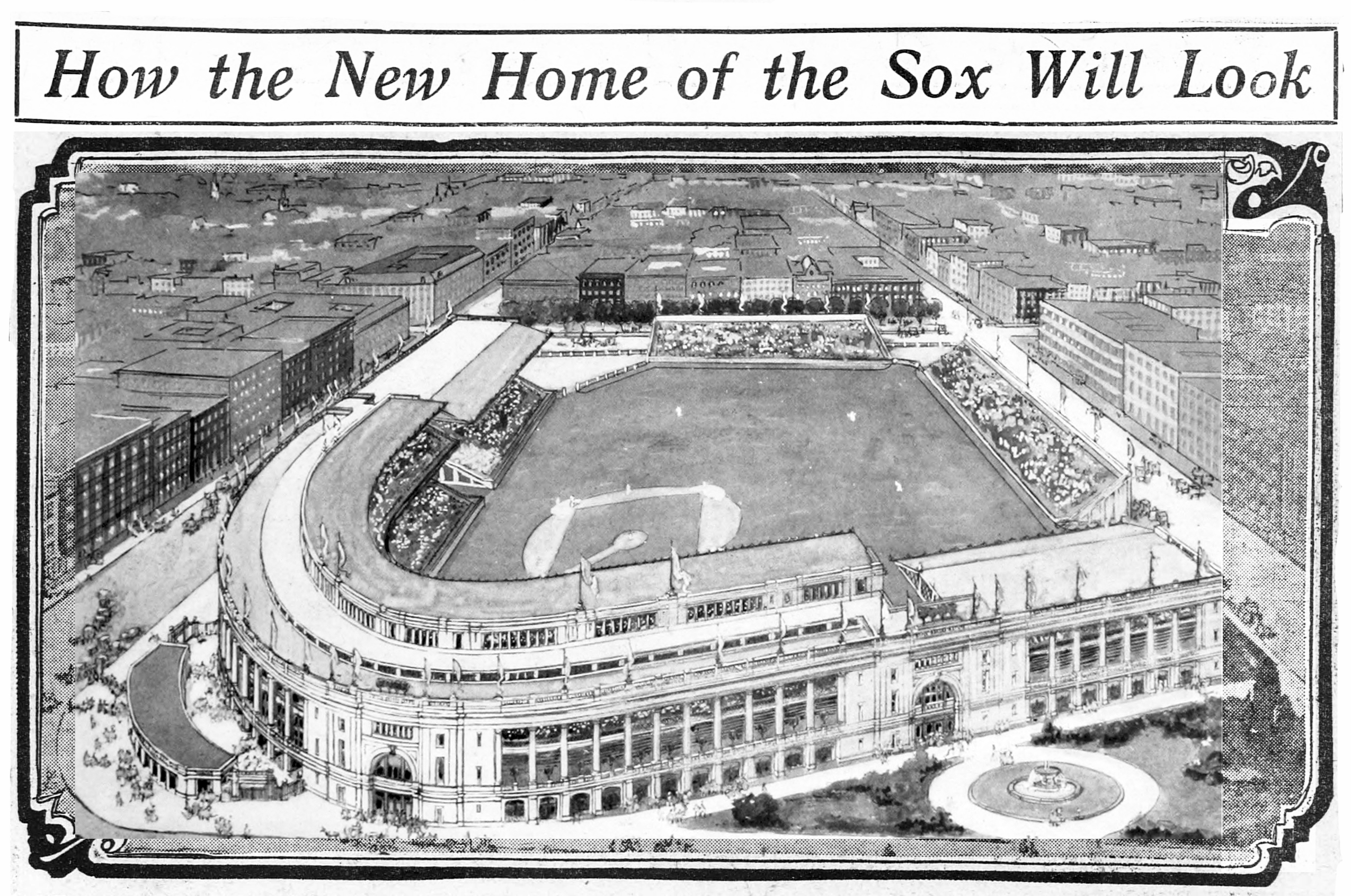 Plans were given out yesterday for the new White Sox Park, which is to be one of the finest in America. President Charles A. Comiskey announced that the new grounds will be ready for the opening of the American League season next Spring, and that work already has been started. The stands, which will have a seating capacity of 32,000, will be at Thirty-fifth street and Shields avenue,the main entrances being on that corner, with other entrances on Thirty-third street and Wentworth avenue. The stands will be placed at the southwest corner of the new grounds to allow the laying off of the playing field bo that the sun will not interfere withthe fielders.

The stands willbe entirely of steel and concrete. The grand stand, seating about 12,000, will be a double-decker, with 4,200 box seats. The pavilions, also of concrete, will be covered with only one deck, while the big concrete bleachers in left and right fields will care for the remainderof the throng.

Architect (Zachary Taylor) Davis, before designing the stands, visited the new grounds at
Pittsburg, St. Louis and Philadelphia and made his plans to escape the bad features of those plants. The grand stand pillars will be so far back that they will not obstruct any vfews. The stand will be laid off after the general plan of the St. Louis American League club’s, except that the pitch of the seats will be altered so that all may see, and the stands will be much nearer the playing field than those at Pittsburg.

The plant complete will cost nearly half a million dollars. It ls contemplated also that a fine row of buildings will be erected along the “Wentworth avenue side of the grounds for business purposes, and also a great indoor rink will be erected on the unused part of the plat purchased by Comiskey, making the plant perhaps the greatest amusement enterprisein the West.

Five thousand soldiers, accompanied by four regimental bands, all the baseball notables in the land and Comiskey himself With his smile will be at Thirty-fifth street and Wentworth avenue to-day to open the magnificent new $750,000 home of tbe White Sox, the finest baseball yard in the world.

Best of all. Billy Sullivan, the veteran catcher aud idol of the South Side fans, will make his maiden bow of the season. Working with Sully wili be Ed Walsh, for six years the Sox’ most consistent winning pitcher. With these two famous players in the game, Manager Duffy can see nothing but victory over the St. Louis Browns to start the career of the Sox’ new home.

Seating room for 35.000 persons has been provided. It is expected that, most of the seats will be filled. Twenty-eight thousand bleacher and grandstand seats will be placed on sale at 1 o’clock to-day. and a number of box seats probably can be detained, although a great number of the 6,400 reserved seats already have been sold. 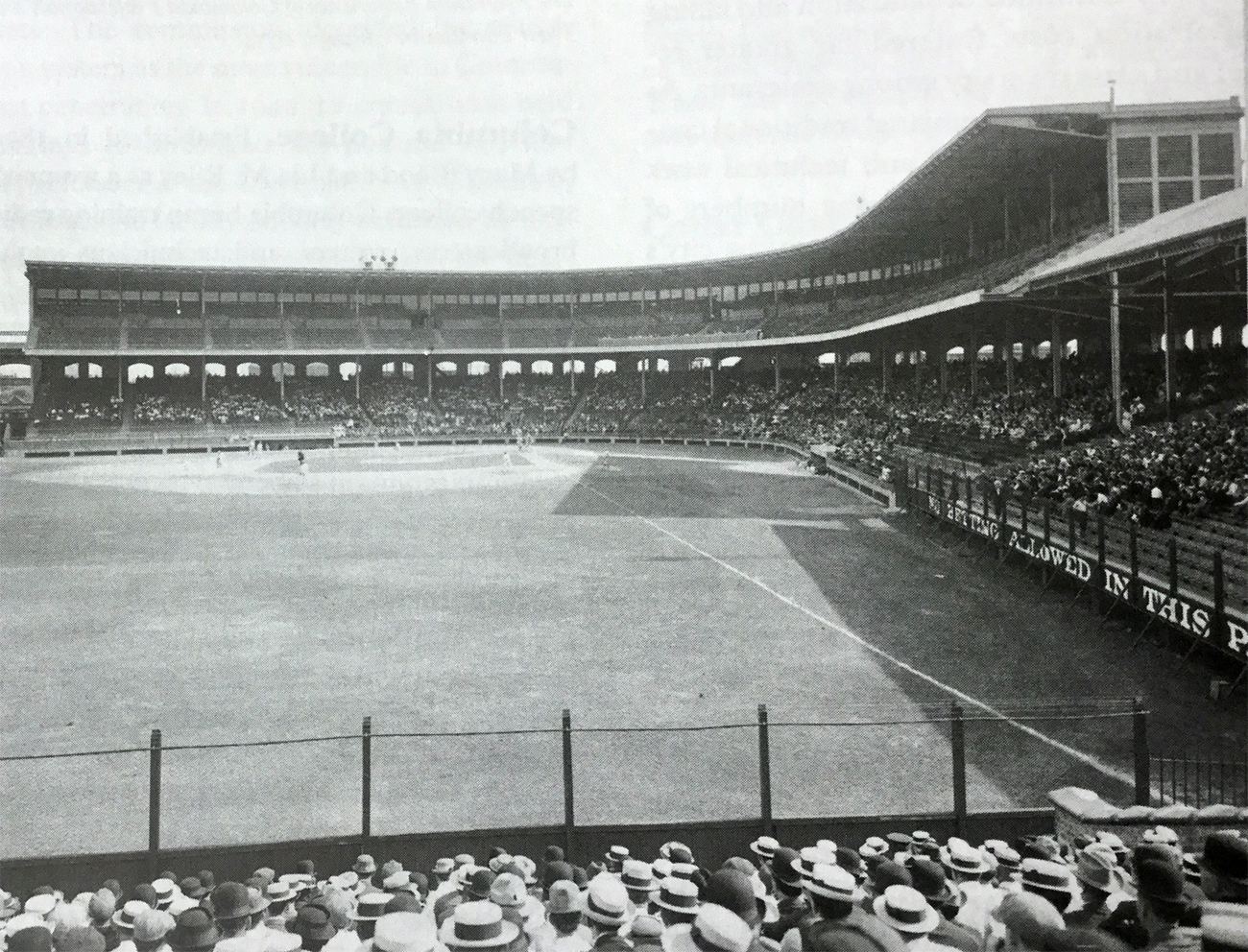 Old Browns to Attend.
Baseball magnates, old ball players and noted fans from all sections of the country have been invited to attend. Vice President Sherman and Governor Deneen are expected, while members of the famous St. Louis Browns, of whicb Comiskey was a star member, will attend in a party. Perhaps they will don uniforms and practice a bit before the ceremonies start. Mayor Busse and members of the Council, including other city officials, will attend, as will visitors of the White Sox Rooters’ Association from Dubuque. St. Louis, St. Paul and
Des Moines.

From Cincinnati Garry Herrmann will bring a party of celebrities nnd John T. Brush of the New York Giants will bring a party from tbe East. President Charles W. Murphy of the Cubs also will attend. Old-time members of the Sox, Frank Isbell and George Davis, wouldn’t miss the opening for anything. Issy. who is owner of the Wichita club, started out with Comiskey, and was a member or the first team be had on the South Side. George Davis, the veteran second baseman will come from Des Moines to attend.

Auto Parade to Precede Game.
Among the features of the spectacle will be an automobile parade that will include members of the Chicago Automobile Club, the Chicago Athletic Club, and the Chicago Motor Club. Leading the procession will be the soldiers now in camp for the Fourth of July celebration in Chicago They will march to the park aud conduct the flag raising ceremonies at the northwest corner of the arena. While the bands play national airs, thev will unfold the Stars and Stripes.

Center Field on Fire.
Three spicy mishaps were noted during the course of tbe combat. Sully kicked up a tuft of turf aud fell sprawling chasing a foul fly in the fourth. The only damage was to the sod. A little while later the grass near the Browns’ habitat took fire. When the contents of the water bucket from the bench failed to subdue the flames a brave bug piled out of the stand and beat the fire to death with his hat.

The most serious accident was the spiking of Zeider’s throwing hand in the third. Stone slid to second on a low throw and his hoof gashed the captain’s fingers. French filled in at second while the Professor performed some first aid on the new grounds. 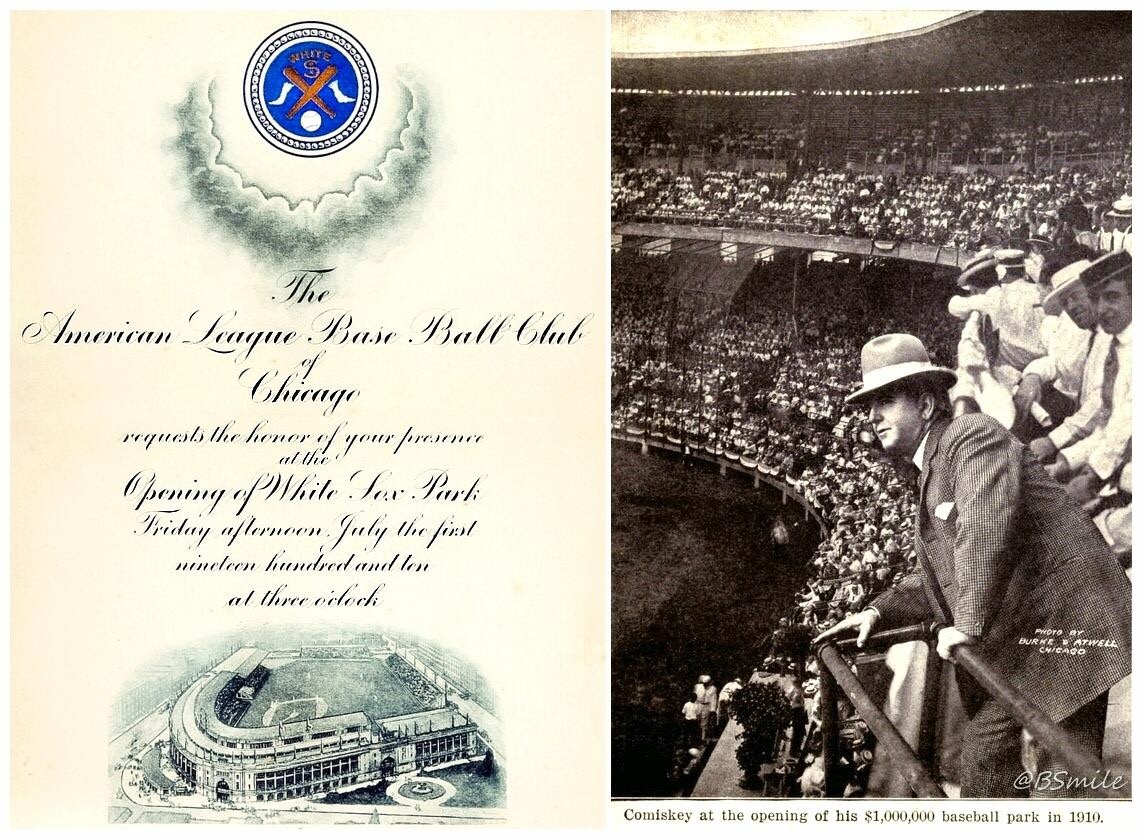 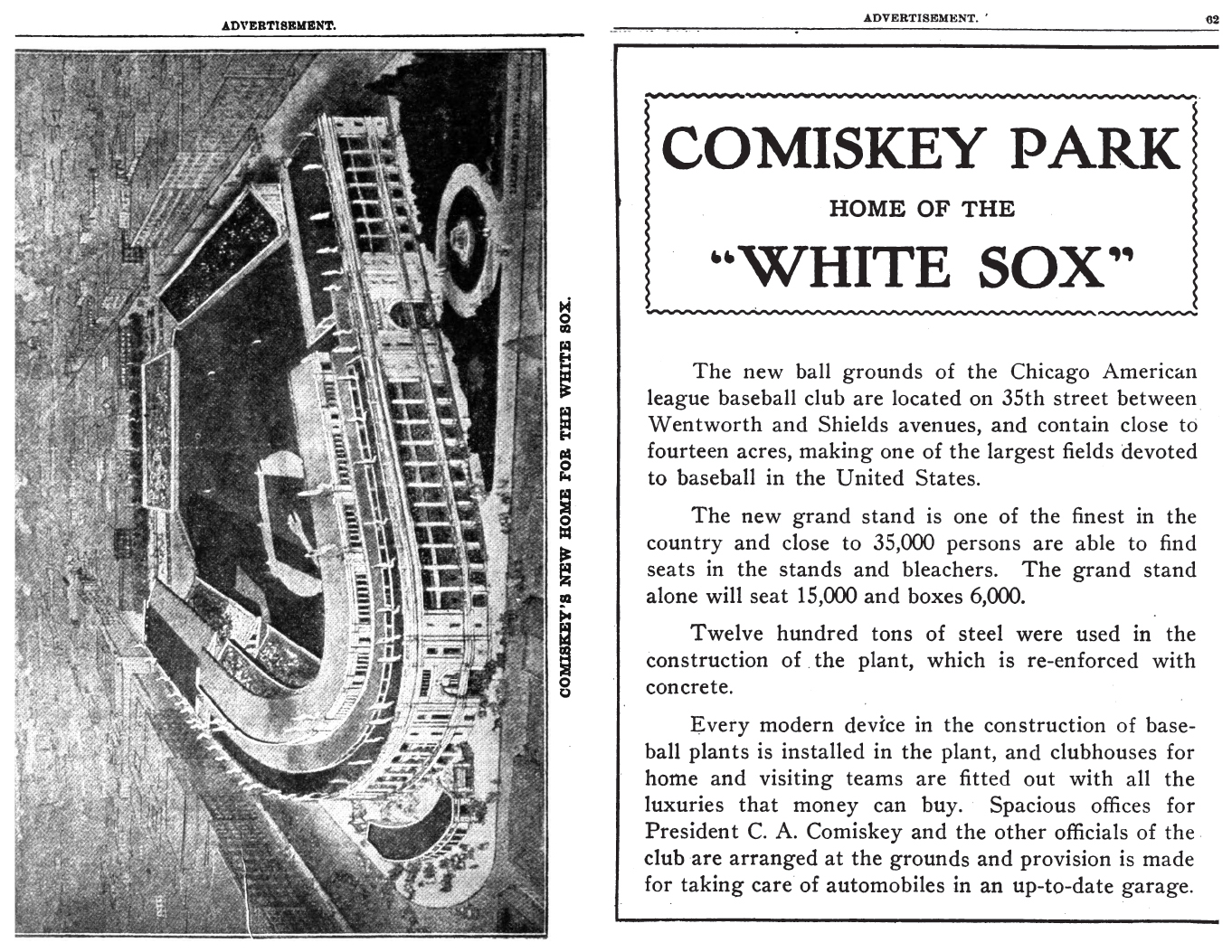 In 1991, the White Sox will say goodbye to Comiskey Park their home for 80 years Here are some memorable dates in the history of major league baseball’s oldest stadium

Jan 19, 1909: little more than 10 years after bringing his baseball team to Chicago Charles Comiskey purchases tract of land near the corner of 35th and Shields Later that year he commissions architect Zachary Taylor Davis to design spacious ballpark for the White Sox on the site

March 17, 1910: The cornerstone of Cqmiskey Park is laid on St Patrick’s Day

1917: The park hosts its first World Series which the Sox win beating the New York Giants 4 games to 2.

1918: Comiskey Park hosts its second World Series as the Cubs wanting ballpark with larger seating capacity lease the park The Cubs go down in defeat to Babe Ruth and the Boston Red Sox

1919: The park hosts its third World Series and last until 1959), which the Sox lose—on purpose it is later discovered to the Cincinnati Reds 5 games to 3. 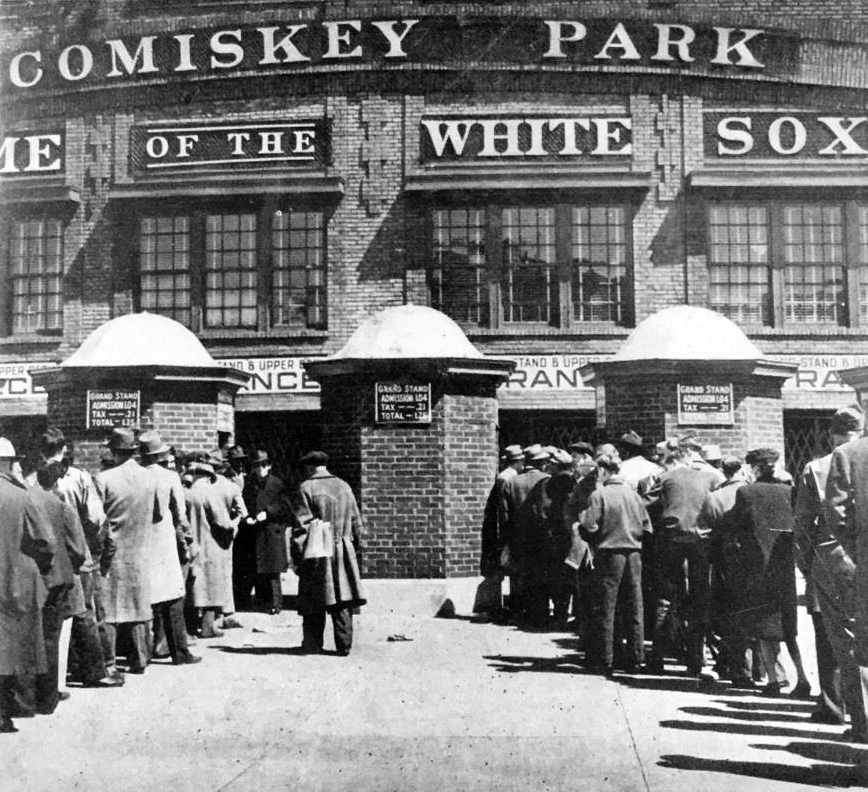 1927: In response to huge turnouts league-wide for the Yankees of Ruth and Lou Gehrig the park is double- decked raising the seating capacity to about 52,000.

July 6, 1933: Comiskey Park hosts the first All-Star Game in conjunction with the World’s Fair on Chicago’s lakefront The game is an instant success with crowd of 47,595 in attendance as the American League Ali- Stars beat the NL stars 4-2.

1934: The first of many changes in field dimensions is made The infield is moved back 14 feet closer to the wall

Aug 14, 1939: The first night game in Chicago is played at Comiskey Park John Rigney and the Sox beat St Louis 5-2. 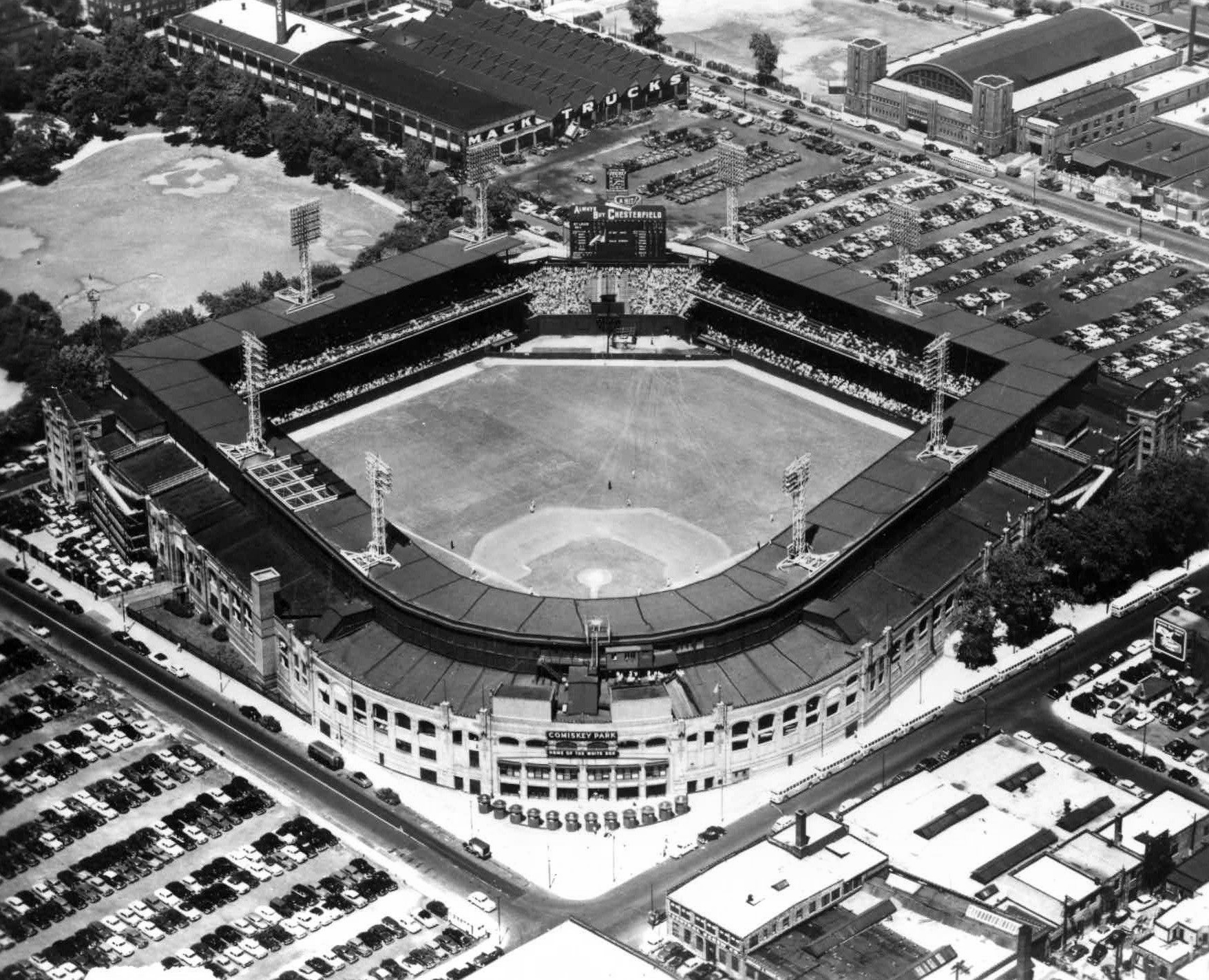 1950: The first free-standing scoreboard is constructed in center field

July 11, 1950: The Ail-Star Game returns and the NL wins in 14 innings on Red Schoendienst’s home run

1951: new scoreboard is erected atop center-field bleachers at cost of $250,000 Also the club draws more than 1 million customers for the first time

1959: After 40-year absence the World Series returns to Comiskey Park as the Sox win their first pennant since 1919. After they win the opener 11-0, the Sox lose the Series to the Los Angeles Dodgers 4 games to 2.

1969: Wire fences are installed shortening home-run distances (to 335 feet down the lines from 352 and to 400 in center from 415), and artificial turf replaces the infield grass Wire fences are removed in 1971, but the center-field distance remains 400.

1976: Veeck returns as owner and tears out the artificial turf and removes the center-field bullpen fence making distance from home plate to the center- field wall 445 feet The distance was reduced to 400 in ’81

1977: The White Sox set an attendance record as the team socks record 192 home runs and is dubbed the South Side Hitmen

1982: Diamond Vision scoreboard is installed 1983: Home plate is moved out 8 feet again changing distances to the walls—341 down the lines 374 to the power alleys and 401 to center Skybox contraction reduces seating to the present 44,432. Also the team surpasses 2 million fans establishing Chicago city attendance record

July 6, 1983: Comiskey Park is host to the 50th anniversary Ail-Star Game and the AL led by Fred Lynn’s grand slam an All-Star first snaps an 11- game losing streak by hammering the NL 13-3.

Oct 1983: Postseason baseball returns to Comiskey for the first time in 24 years but the Sox lose Game 3 of the ALCS 11-1 to Baltimore and are eliminated the next day 3-0 in 10 innings

May 10, 1984: Comiskey Park is the site of the longest game in American League history After two days and 25 innings the Sox beat Milwaukee 5-4 on Harold Baines home run

July 1, 1985: The 75th anniversary Comiskey Park the nation s oldest ballpark is celebrated 1986: Home plate is moved back 8 feet and distances to the fences are remeasured and found to be 347 down the lines 382 to the power alleys and 409 to center

Dec 5, 1986: The Illinois General Assembly passes funding legislation to build new home for the White Sox across the street from Comiskey Park

April 1991: The first game is scheduled to be played in the new stadium 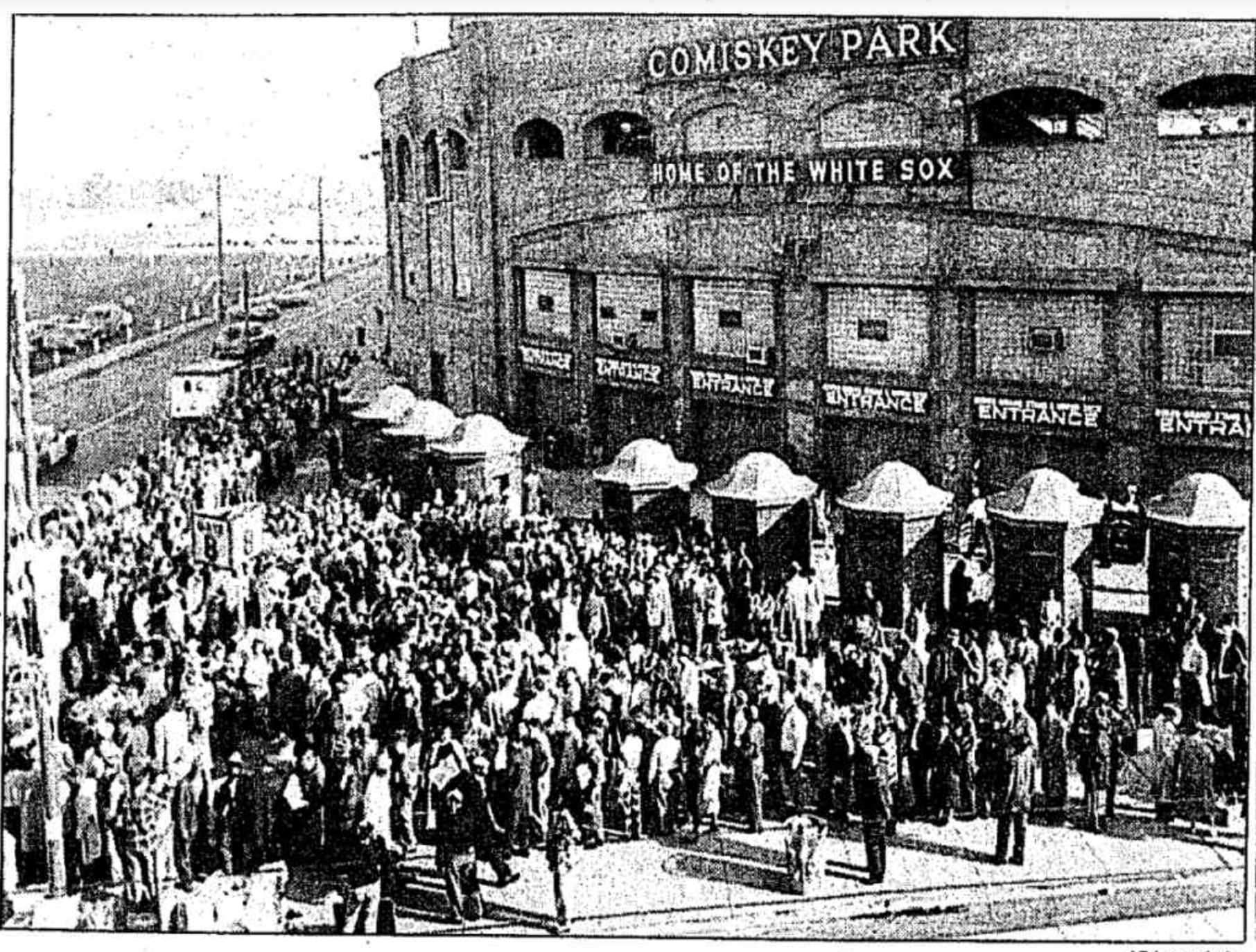 White Sox fans below gather in front of Comiskey Park in October 1959 hoping to buy tickets to see that clay s opening game of the World Series between the Sox and the Los Ange les Dodgers.

INTRODUCTION
In 1927 the only expansion at Comiskey Park was completed. The ballpark was enclosed with double deck grandstands surrounding the playing field, except in centerfield where a single tier of stands was located, increasing the seating capacity to 52,000 The original scoreboards were located on the left and right field fences. Before the start of the 1951 the first electric scoreboard was added in centerfield in the opening between the second decks. 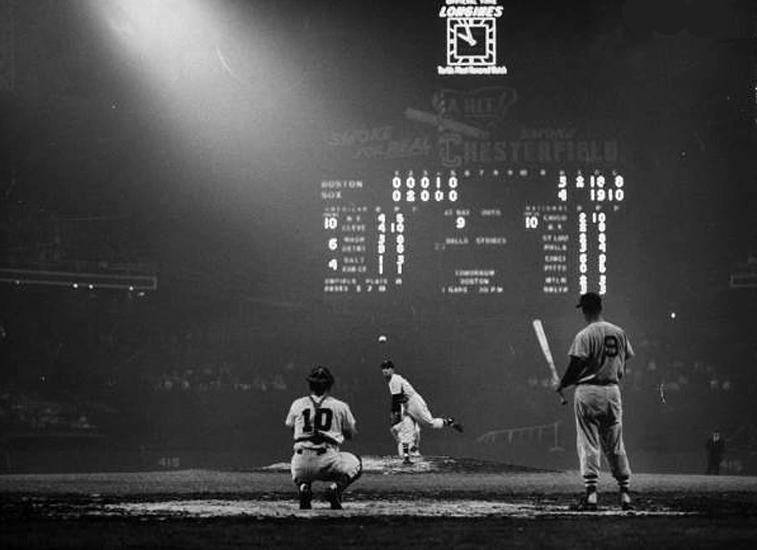 A movie he saw years ago, “The Time of Your Life,” inspired Bill Veeck, president of the White Sox, to install the “exploding” scoreboard in Comiskey park.

“This character in the film was always playing pin ball machines,” said Veeck. “Toward the finish he finally hit the jackpot and there was the racket and flashing of lights you ever heard or saw.”

A firing platform back of the scoreboard will go into action when a White Sox player hits a home run. It will be ready for the night game a week from Thursday against the Cleveland Indians.

There will be noises of varying tones and intensities. When Al Smith hits a homer, simulated hoof beats of horses will be heard. Al won a horse in Puerto Rico this spring for leading the White Sox and Phillies in homers in a three game series. Other buttons will produce varying noises, such as thunder and the collision of locomotives.

The eight small ladders atop the scoreboard will flash into electrical patterns. Strobe lights are atop the two higher ladders. Bombs and fireworks also will be exploding from the firing plat- form.

Cost of these installations, and other features, was $300,000, said Veeck. Yes—he said—there also will be the usual, or unusual, fireworks display after all night games.

Cheers of 29,586 spectators still were ringing in their ears and their eyes were half-blinded by the multicolored send-off given them by the electrical monster in center field.