Several members of the Cubs’ special family were among the 35,000 spectators at Chicago’s major league inaugural last night in Comiskey park. Among them were Charles Drake, assistant to P. K. Wrigley; Boots Weber, Miss Margaret Donahue, and Bill Veeck. Not to mention young Buddy Hartnett, son of tne Cubs’ manager.

Mr. Drake, as official spokesman for the National league club, said that Wrigley field would not be lighted until the Cubs were certain their fans wanted night baseball. He declared that under no circumstances would the Cubs join the night baseball movement next year.

Eight electric towers illuminated Comiskey Park, In the photo above, four of these towers, carrying a total of 768 floodlights, are shown as they turn night into day.

Baseball under the stars was a hit from the moment young Charles Comiskey II. pressed two switches at 8:25 o clock that brought out the green of the field in bold relief. It was as though one had suddenly walked into bright sunshine. The twin switches are located in the offices formerly occupied by J. Louis Comiskey, owner-president of the club, who died recently without realizing his ambition to see his team in action at night.

The financial soundness of the Comiskey project was proved by the tremendous turnout to see a fourth place team battle the tail end Browns. Earlier games against St. Louis on the south side this year drew from 1,000 to 3,000.

Jimmy Dykes, the White Sox man- ager, was just as glib in the nocturnal setting as when perspiring under the hot sun. “The umpires still look the same to me under the lights,” he said.

Ted Lyons hobbled into a box seat back of the White Sox dugout, aided by a cane. His right ankle, wrenched in Cleveland Sunday, pained the vet- eran pitcher so much that he was ordered to Mercy hospital this morn- ing. The ankle will be -)laced in a cast for a week.

The major complaint of players is that a ground ball makes a shadow as it skips across the turf, thus increasing the hazard of fielding.

Kenesaw Mountain Landis, commissioner of baseball, hung his chin on folded arms against a box seat railing on the first base side watching another chapter in baseball’s progress. Don Barnes, president, and Bill de Witt, business manager of the Browns, were all smiles as they surveyed the crowd. The Browns don’t often play to such assemblages.

Even though it was a hot, steamy night, the park was almost completely free from insects.

The White Sox will relax today, the custom on the day after a night game under the fixed major league schedules. The custom will not prevail regularly under the Sox’s emergency night schedule, however. 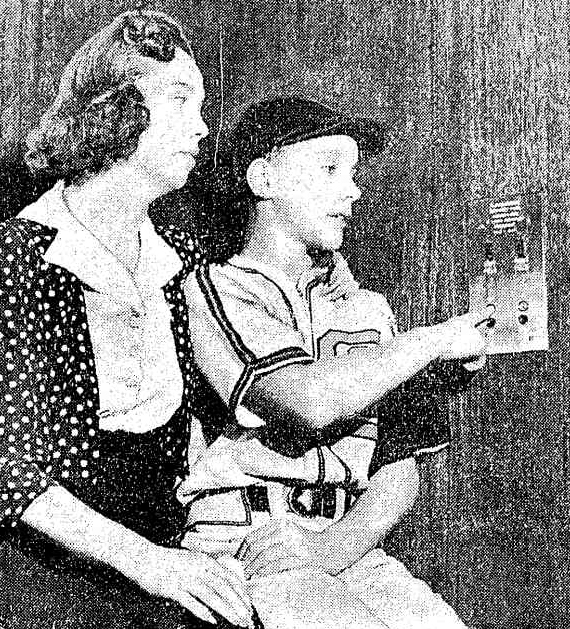 Dorothy and Charles Comiskey throw the switch that lights up Comiskey park for Chicago’s first night major league baseball game. It was quite a party for 35,000 fans, as the White Sox whipped the Browns, 5 to 2.