Committee Goes to New York Today to Take Up Details of Pact.

Un the most exciting and mysterious meeting the American League has had since the war days of fifteen years ago, peace between the Federal League and organized baseball was practically declared yesterday, but it will not be consummated until all factions can get together. With that idea before them a peace committee of five members of the American League will take the fast train at noon today for New York to meet with committees of the National, the Federal, and International leagues. Indications that all details will be settled by Saturday night.

According to the plans, Charles Weeghman and his associates in the ownership of the Whales will purchase the Cubs, although none of the parties concerned will talk for publication. 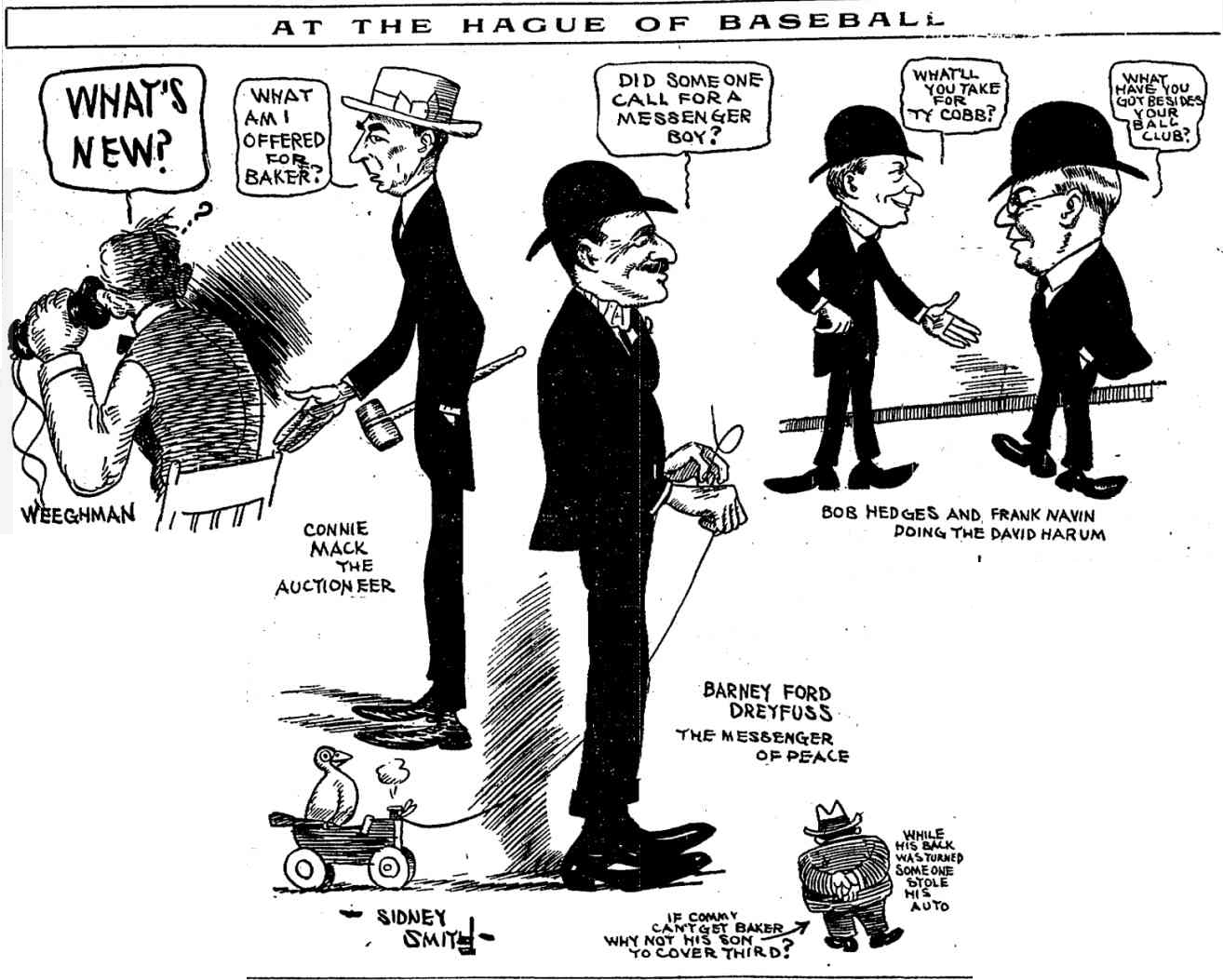 In Session Until Midnight.
To wind up their business at their annual meeting yesterday the American League magnates remained in session until nearly midnight. During the day they had received Barney “Ford” Dreyfuss, peace emissary of the National League, and after learning the proposition which is to bring the waring powers together the Ban Johnson body voted favorably on it.

That there will be no more baseball war and that only the American and National leagues will exist hereafter was assured. In order to bring such a condition about it is necessary to take care of several Federal League men. They are to be taken into the National and International leagues. Possibly one of them will get into the American League.

Weeghman to Head Cubs.
Although the details of the peace proposition were kept secret, it is practically assured that Weeghman and his associates will have the Cubs on the north side to open the 1916 season; that Harry Sinclair, the weakthy backer of the Newark Feds, will be the head of the New York Giants; and that Phil Ball will own the St. Louis Cardinals. Others are to be submitted to the ranks, some with the International League. It is possible that Ed Gwinner will be permitted to buy the Cleveland club in the American League.

Weeghman to Go East.
While the night session of the American League was in progress Charles Weeghman, boss of the Whales, sat in his home on the north side for any news. Repeated calls on the telephone failed to get the north side magnate to admit that he would be president of the Cubs within a few days, but before midnight he announced that he, too, had a reservation on the fast train to New York, the same train which would carry the American League party.

“I don’t think it is time for me to talk yet,” said “Weeghman. “There are many things to be done, and I have been sitting back quietly waiting results. Now it looks like it is time for the action to start. It came a little quicker than I had expected, but I will admit that I knew what was going on. I am glad there is to be peace. I always have been in favor of it. Perhaps within a few days I shall be able to announce some things of great interest. But tonight I really can’t say a thing. When it is all completed I think it will create an ideal condition in baseball, and the old game will be better than ever.”