The Chicago Colleens of the All-American Girls Baseball league will arrive by bus in Chicago today at 3 p.m., from their spring training camp at Opa Locka, Fla. They have drilled there more than a month for the swason’s opener Sunday against the Peaches in Rockford. Following three games in Rockford, the Colleens will return to Chicago to open their 63 game home schedule Wednesday night, in Shewbridge field, 74th and Aberdeen sts.

Quartered At Southmoor
The Colleens will be quartered in the Southmoor Hotel, 6646 S. Stony Island av.

The chartered bus from South Bend, Ind., is carrying a party of 18, including Manager Dave Bancroft and Margaret Johnson of New York City, chaperon.

AFTERMATH
The team was the worst in the league, getting roughed up as a last-place expansion club with a 47-76 record, ending twenty nine and a half games out of the first place spot in the division. The only team to do worse, the Springfield Sallies of the Western Division, ended 41-84 in last place thirty five and a half games out. Both teams lost their franchises by the end of that season.

From 1949 through 1950, the Colleens and the Sallies became rookie development teams that played exclusively exhibition games. Their tours included contests at Griffith Stadium and Yankee Stadium. The team dissolved entirely by 1951.

One From Chicagoland
Of the 16 players Chicagobound, only one is from Chicagoland. She is Charlene Barnett of Elgin, regular secind baseman, who played last year with the Grand Rapids, Mich., Chicks, 1947 A.A.G.B.L. play-off champions.

Every day was Ladies Day in All-American Girls League

DETROIT AP -They played baseball, real baseball in skirts and shorts. They were scouted, hired and managed by men and chaperoned by women on road trips to second-tier towns in the Midwest

Now more than generation after the demise of the All-American Girls Professional Baseball League, the unique organization is knocking at the door of the Baseball Hall of Fame

The league which operated from 1943 to 1954, will highlight Women in Baseball exhibit scheduled to open Nov 5 at the baseball shrine in Cooperstown The exhibit also will feature women executives and umpires curator Ted Spencer said.

The league was founded in late 1942 by then-Cubs owner Philip Wrigley who believed the govemment might suspend major league baseball during World War II Wrigley was looking for a hedge.

The league started with four teams and ended with five and played at least 100 games each season At its peak in 1948, the league fielded teams in 12 cities in Michigan, Indiana, Illinois and Wisconsin and played 125 games, Spencer said

“When we started in ’43 we started pitching underhand” with softball, said Dottie Collins of Ft Wayne Ind who played all or part of six seasons and has worked closely with Spencer in organizing the exhibit

They went from underhand to sidearm to overhand with regulation baseball by 1947, which Collins said put less emphasis pitching and produced scores and statistics consistent with those of men’s pro leagues

The teams played under standard baseball rules But off the field Wrigley made different rules said Collins, now 64.

Players wore uniforms consisting of one-piece skirts over shorts. Away from the ballpark, Wrigley demanded that players wear skirts makeup and high-heeled shoes and not wear slacks, smoke or drink in public

But double standards seldom surfaced when the women took the field. Teams of 16 to 18 women each were managed by veteran ballplayers such as Hall of Fame members Jimmy Foxx and Max Carey. Games were regularly covered by local newspapers and the league in its peak years drew more than million spectators who paid 50 to 75 cents for admission, Collins said

“The guys were back from the service the major leagues were taking hold again,” she said. “Television took people away from baseball.”

“You’re talking about bunch of 19- to 24-year-olds” who played at the time she said. “We didn’t think about what we were doing We were having ball… We didn’t know what we had.

“It wasn’t until we hit Chicago in 1982 for reunion that it hit us,” Collins said, “We were swamped with reporters and we thought maybe we can do something about this.” 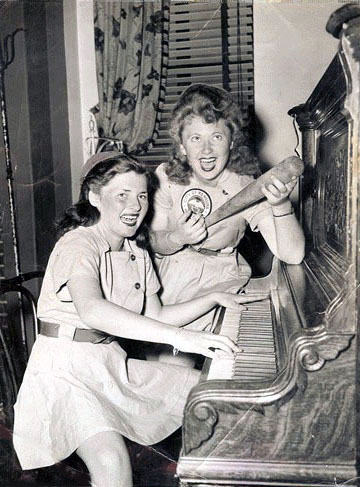 Batter up! Hear that call!
The time has come for one and all
To play ball.

We are the members of the All-American League
We come from cities near and far
We’ve got Canadians, Irishmen and Swedes,
We’re all for one, we’re one for all
We’re all Americans!!

Each girl stands, her head so proudly high,
Her motto ‘Do or Die’
She’s not the one to use or need an alibi.

Our chaperones are not too soft,
They’re not too tough,
Our managers are on the ball.
We’ve got a president who really knows his stuff,
We’re all for one, we’re one for all,
We’re All-Americans!

THE RULES OF CONDUCT

THE MANAGEMENT SETS A HIGH STANDARD FOR THE GIRLS SELECTED FOR THE DIFFERENT CLUBS AND EXPECTS THEM TO LIVE UP TO THE CODE OF CONDUCT WHICH RECOGNIZES THAT STANDARD. THERE ARE GENERAL REGULATIONS NECESSARY AS A MEANS OF MAINTAINING ORDER AND ORGANIZING CLUBS INTO A WORKING PROCEDURE. 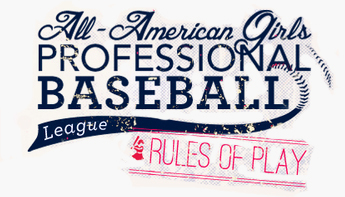 1. ALWAYS appear in feminine attire when not actively engaged in practice or playing ball. This regulation continues through the playoffs for all, even though your team is not participating. AT NO TIME MAY A PLAYER APPEAR IN THE STANDS IN HER UNIFORM, OR WEAR SLACKS OR SHORTS IN PUBLIC.

2. Boyish bobs are not permissible and in general your hair should be well groomed at all times with longer hair preferable to short hair cuts. Lipstick should always be on.

5. Jewelry must not be worn during game or practice, regardless of type.

6. All living quarters and eating places must be approved by the chaperones. No player shall change her residence without the permission of the chaperone.

7. For emergency purposes, it is necessary that you leave notice of your whereabouts and your home phone.

8. Each club will establish a satisfactory place to eat, and a time when all members must be in their individual rooms. In general, the lapse of time will be two hours after the finish of the last game, but in no case later than 12:30 a.m.

9. Players must respect hotel regulations as to other guests after this hour, maintaining conduct in accordance with high standards set by the league.

10. Always carry your employee’s pass as a means of identification for entering the various parks. This pass is NOT transferable.

11. Relatives, friends, and visitors are not allowed on the bench at any time.

12. Due to shortage of equipment, baseballs must not be given as souvenirs without permission from the Management.

13. Baseball uniform skirts shall not be shorter than six inches above the knee-cap.

14. In order to sustain the complete spirit of rivalry between clubs, the members of different clubs must not fraternize at any time during the season. After the opening day of the season, fraternizing will be subject to heavy penalties. This also means in particular, room parties, auto trips to out of the way eating places, etc. However, friendly discussions in lobbies with opposing players are permissible . Players should never approach the opposing manager or chaperone about being transferred.

15. When traveling, the members of the clubs must be at the station thirty minutes before departure time. Anyone missing her arranged transportation will have to pay her own fare.

16. Players will not be allowed to drive their cars past their city’s limits without the special permission of their manager. Each team will travel as a unit via method of travel provided for the league.

FINES OF FIVE DOLLARS FOR FIRST OFFENSE, TEN DOLLARS FOR SECOND, AND SUSPENSION FOR THIRD, WILL AUTOMATICALLY BE IMPOSED FOR BREAKING ANY OF THE ABOVE RULES.