BY IRVING VAUGHAN.
The guns of the Yankees boomed forth with some more devastating shots today and the Cubs, the sensational Lonnie Warneke among them, went staggering into the ranks of the vanquished in the second battle of the world series.

The second consecutive defeat for the champions of the National league was administered by a score of 5 to 2, and there were no heroics involved to arouse the fervor of some 50,709 spectators. It was just a ball game that seemed as good as concluded as soon as the first Inning was reeled off. 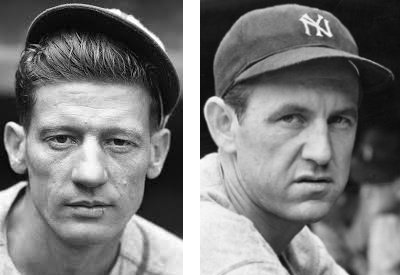 It’s Up to Charley Root.

The Yanks can hit when it means something, which everybody suspected. The Cubs hit in the pinches, which was another suspicion. It was that way today. It was that way yesterday. And it may be the same In two more playing days unless Charley Root, helped by what his mates usually do on their own home field. can come up with a performance against the veteran George Pipgras in the Chicago opener Saturday.

There was something about Warneke this afternoon that indicated there is some basis for the old argument that a world series assignment for a freshman is an invitation to disaster. Warneke stood the National on its beam end without trembling.But he was visibly fretful as he reached his big moment. He started without control, and the always eager, pressing Yankees used this as a stepping stone to a pair of runs in the opening inning. From then on Warneke was whipped. He did restrict his foes exclusively to singles, but the absence ot the usual homers, doubles and triples in no way hindered the American leaguers in their plans to annex, their tenth straight victory in world series endeavor.

Walks Are Big Help to Yanks.
The harm that passes can do when given to a hitting club was demonstrated vividly. Warneke gave four of them, one intentional. The three he gave became runs because hits followed. The one, he was ordered to give so as to, get a hand picked victim proved a boomerang, because the hand picked victim uncorked a single that drove in two teammates when the score was tied at two apiece In the third inning.

The game was gone then for sure. Warneke did well thereafter. but it was because the mauling Yanks were dumb on the bases and because the Cubs were able to display- some of the infielding skill which made them famous in their own, league.

Eight Cuibs Strike Out.
Gomez apparently was no steadier than when the American league clubs knocked him about freely. But he had a fast ball that helped him disprove the theory about freshmen in important jobs. Gomez was hit, but he kent thie hits scattered. Because he was fast he didn’t need control. The Cubs swung without waiting. That’s why only one walked and eight of them fanned. Ten fanned yesterday. Eighteen In two days provides a hint that the Chicagoans may be out to duplicate the famous blind swinging they did in the 1929 event. And with a little fielding from the erratic Frank Crosettl and from the ageing Babe Ruth the Cubs might never have scored at all.

In the Chicago attack only Riggs Stephenson stood out. He hit one ball that with Ruth’s infirmities gave the extra base needed to put him in at position to score which he did. He hit another that except for the one defensive play by the Yanks would have driven in a man who, had profited by Ruth’s old age. And in the eighth inning he delivered again in the start of a that a rally a hitting team would have forced against the pitching of the left handed Gomez.

Stephenson delivered hits in each of the two innings in which one other Cub hit safely. Manager Grimm came through with two hits that developed nothing, and in his one appearance in a pinch he flopped.out.

The game opened with Gomez booming through a fast ball which Herman almost broke his back, but the second pitch of the day was something different. Herman sent it spinning past Sewell, close to third, and it bounced off the left field wall for a double. A lazy fly leaped off English’s bat and into the hands of Combs in short center. Crosetti. the youthful Yank shortstop, then rendered valuable aid to the enemy. He fumbled Cuyle’s grounder, slapped it around like a rubber ball, and was still doing his little panicky act after Cuyler had arrived at first and Herman at third.

Stephenson drove a none too robust fly to Combs, but the Cubs didn’t neglect to take advantage of the veteran’s lack of throwing skill. The instant the ball dropped into Combs’ hands Herman tore for the plate and made it standing up. Then Demaree, playing in Moore’s place because of the presence of the left handled Comez, closed the inning with a fly that Ruth took in without trouble. 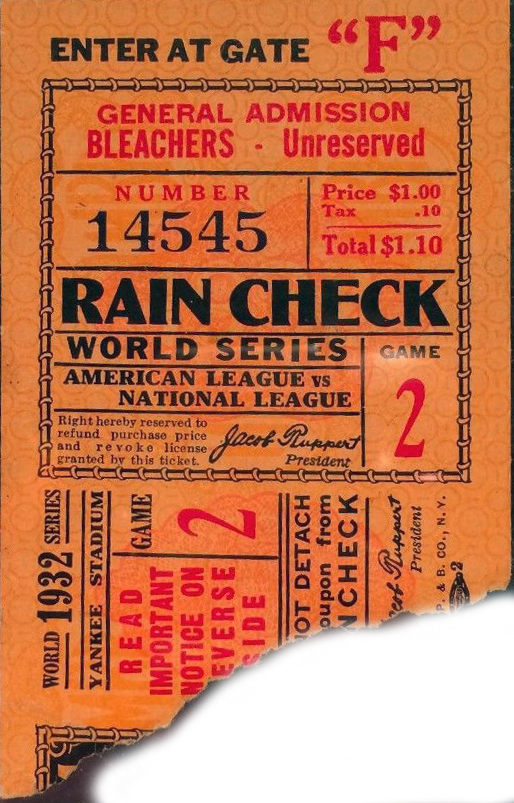 Combs Waits Him Out.
Warneke’s first inning in world series toil a flop not only because of an apparent case of fright but because he found himself unable to out guess Combs, the Yank leadoff man. The kid’s first pitch was a perfect strike. Then Combs started fouling off the good ones nnd neglecting to give any attention to those that were wide. He ran the count down to 3 and 2, fouled a few more and then walked. When Sewell walked, the Cubs around Warneke to get him back to earth and their talk must have been a success, because he fanned Ruth on four pitched balls. All the strikes were sharp breaking curves, two of which the Babe took without moving his bat.

What Ruth couldn’t do In this situation, Gehrig did. He worked the count to 3 and 2 and then crashed through Grimm’s defense for a single. Combs scoring and Sewell stopping at second. A pop foul put Lazzeri back on the bench and Dickey then pulled another drive in Grimm’s direction. The manager made another frantic dive but the ball, just as in the case of Gehrig’s hit, skipped through for a single, scoring Sewell and sending Gehrig to third. Then Warneke found his bearings again and slipped over a third strike on Chapman to close the unhappy inning.

Cubs Tie Score in Third.
For a few moments in the second it appeared as if the Cubs might come crashing through in an important way. Grimm led off with a single to center and Hartnett walked. They moved along on Jurges’ sacrifice, but the rest of the inning was made up of strikeouts for Warneke and Herman.

It wns none other than Ruth who helped boost the Cubs into a momentary tie with a run in the third. Aftet two Were out Stephenson slammed a grounder to right and Ruth meant to pick it up, but the ball slipped past him ani the kind hearted scorers decided it was a double instead of a single and an error. Then Demaree stepped into the breach with a single to right scoring Stephenson. but an instant later the young man took a big lead off base and Gomez nipped him with a throw to Gehrig. 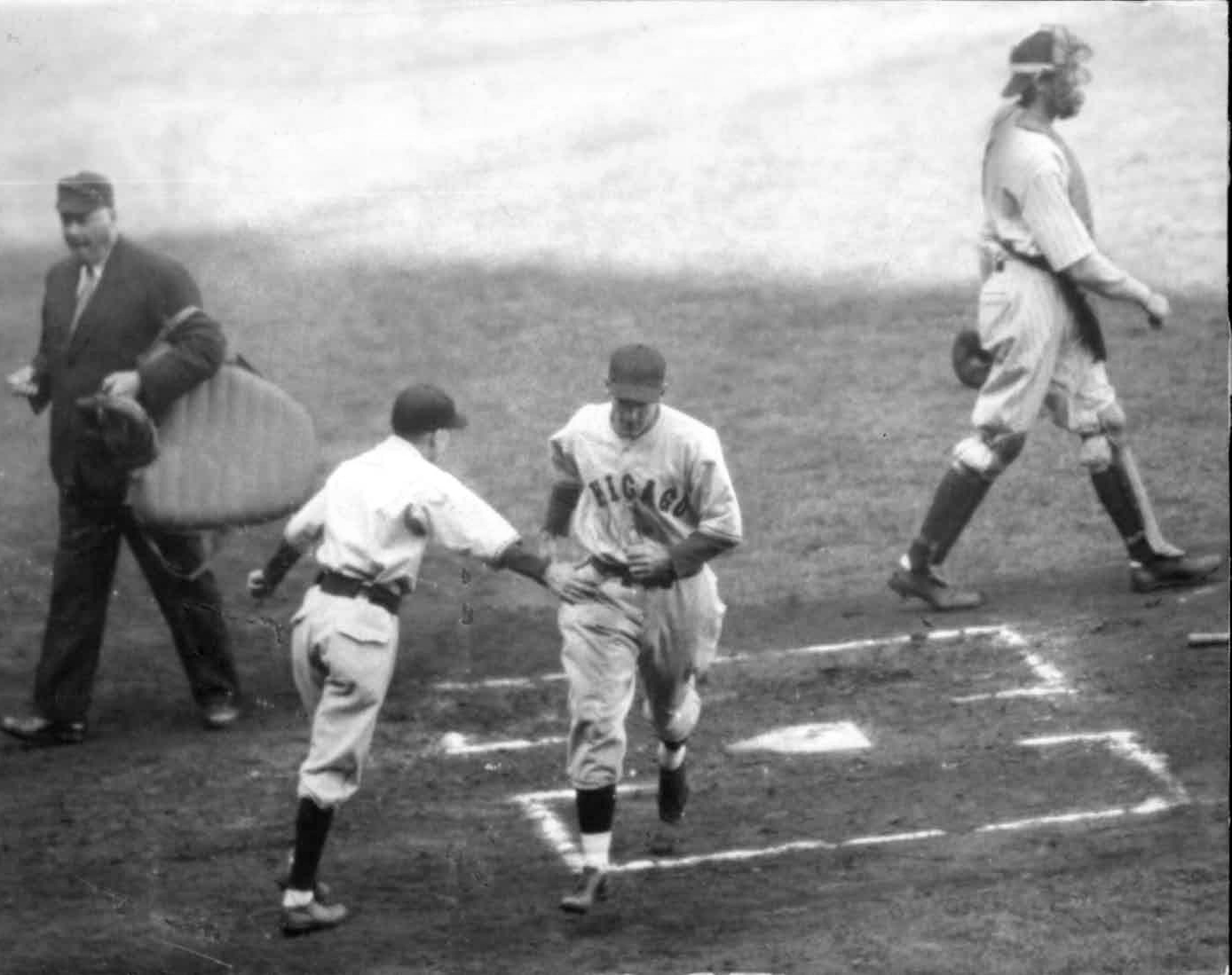 Riggs Stephenson scoring on a single by Frank Demaree in the third inning.

Walk to Ruth Brings Trouble.
The Ruth menace caused Warnerke to get into that spot that let the Yanks jump out In front again with two runs in their half of the third. With one gone Warneke, trying to keep the ball on the outside, walked the Babe. Gehrlg hit another single toward right and Herman slapped it down back on the grass, thus holding Ruth at second.

A scooping pickup by Jurges robbed Lazzeri of a hit. Then WVarnelke ordered to pass Dickey to take a chance on Chapman, but the strategy went blooey when Chapman looped a single into right, sending Ruth and Gehbrg home.

Yankees Go Dnmb.
Grimm tried to start something for his own men when he singled to start the fourth, but it meant nothing because two of the next three fanned.

The Yanks also steamed up for some important deeds in the fourth only to blow their chances by dumbness on the bases. Combs singled to left and went to third on Sewell’s single in the same direction. There was one out at the time. Ruth poked an easy grounder to Warneke, who pegged to Hartnett. Hartnett ran Combs back toward third and Sewell was charging into the same bag from the opposite direction. Combs, forgetting the bag belonged to him, stepped off and Hartnett tagged him. Then Sewell contributed to the bone play by starting back to second. A throw from Hartnett to Jurges doubled him.

Cuyler Smacks Triple.
Gomez had his strikeout ball working in the fifth, but this didn’t keep him out of trouble. He fanned Herman and English in the twinkling of an eye, making four strikeouts in five consecutive batters. Cuyler then rammed a high fly into the right field corner and Ruth made a valiant attempt to spear the ball, but it trickled down to the ground and Cuyler, playing a long shot, tore for third. He beat the throw by inches and he would have gone home a moment later with a run if Sewell hadn’t leaped high for a bounder close to third and thrown out Stephenson.

Gehrig’s third hit, a twisting low liner that Herman couldn’t gauge opened the Yank fifth and brought on another run. He moved down to second while Herman was throwing out Lazzeri. Lou scored on Dickey’s single into center and the inning closed abruptly when Dickey was doubled trying to steal as Chapman fanned. There were only two Yankee hits after this. Ruth slapped a single to right in the seventh and Gehrig grounded into a double play. Lazzeri scratched a hit past English in the eighth and another double play was pulled.

Hope Flares in Eighth.
The eighth brought to the Cubs the second and last inning in which they produced two hits, but this merely delayed the inevitable. English opened with a single to right. Cuyler flied out and Stephenson shot a single into left. What might have developed into something with another hit so faded when Demaree and Grimm rolled into force outs. 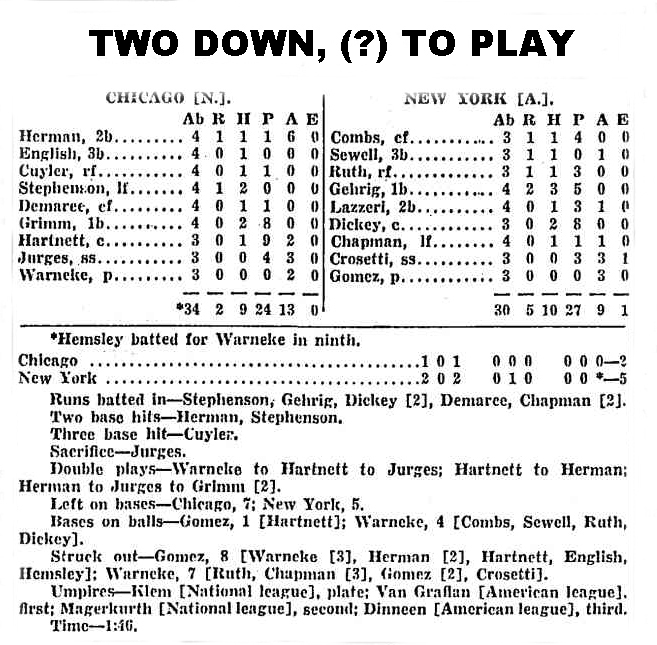