While both the Cohan and Norworth songs were advertised in the same May 2, 1908, issue of Variety, Cohan’s was registered for copyright on May 8, six days after “Take Me Out to the Ball Game.” Lantern slides for Cohan’s song followed one month after those of “Take Me Out to the Ball Game.” They were shot (also by DeWitt C. Wheeler) at the American League ballpark in upper Manhattan. The trade publications advertised both songs as sensational hits, and in the case of Cohan’s song, the “novelty summer waltz song and a home run hit.” Not only were the titles nearly identical, there was an unmistakable similarity in the opening phrases of both choruses.

SONG TITLES ALIKE.
Two new songs about the national summer game bearing precisely the same titles have been the talk of the popular music trade the past week.

Neither of the publishing firms makes the usual claims when a similarity in theme or title arises. It is admitted that this instance is simply peculiar.

Although the trade publications remarked on the peculiar similarities of the two song titles, neither publisher seemed to have made an issue over the similarity of the refrains. In his later interviews, Norworth was quick to point out that he knew he had the better song, but there is no evidence that he ever challenged the powerful “Yankee Doodle Boy.” The two songs could not have been more different in tone, message, and prosody. Cohan’s refrain is passive, like a lovely afternoon at the ballpark, whereas “Take Me Out to the Ball Game” has you on your feet with its opening octave jump. Norworth has no reservations about Katie Casey’s qualifications as a diehard and knowledgeable fan of the game, even leading the rooters in the song’s “infectious” chorus. Contrast that with Cohan’s opening verse, in which he advises the rooters around him that undignified behavior should be put aside so that an appropriate place might be made for a woman, who then could gently and lovingly be taught the rules of baseball when you “Take Your Girl to the Ball Game.” 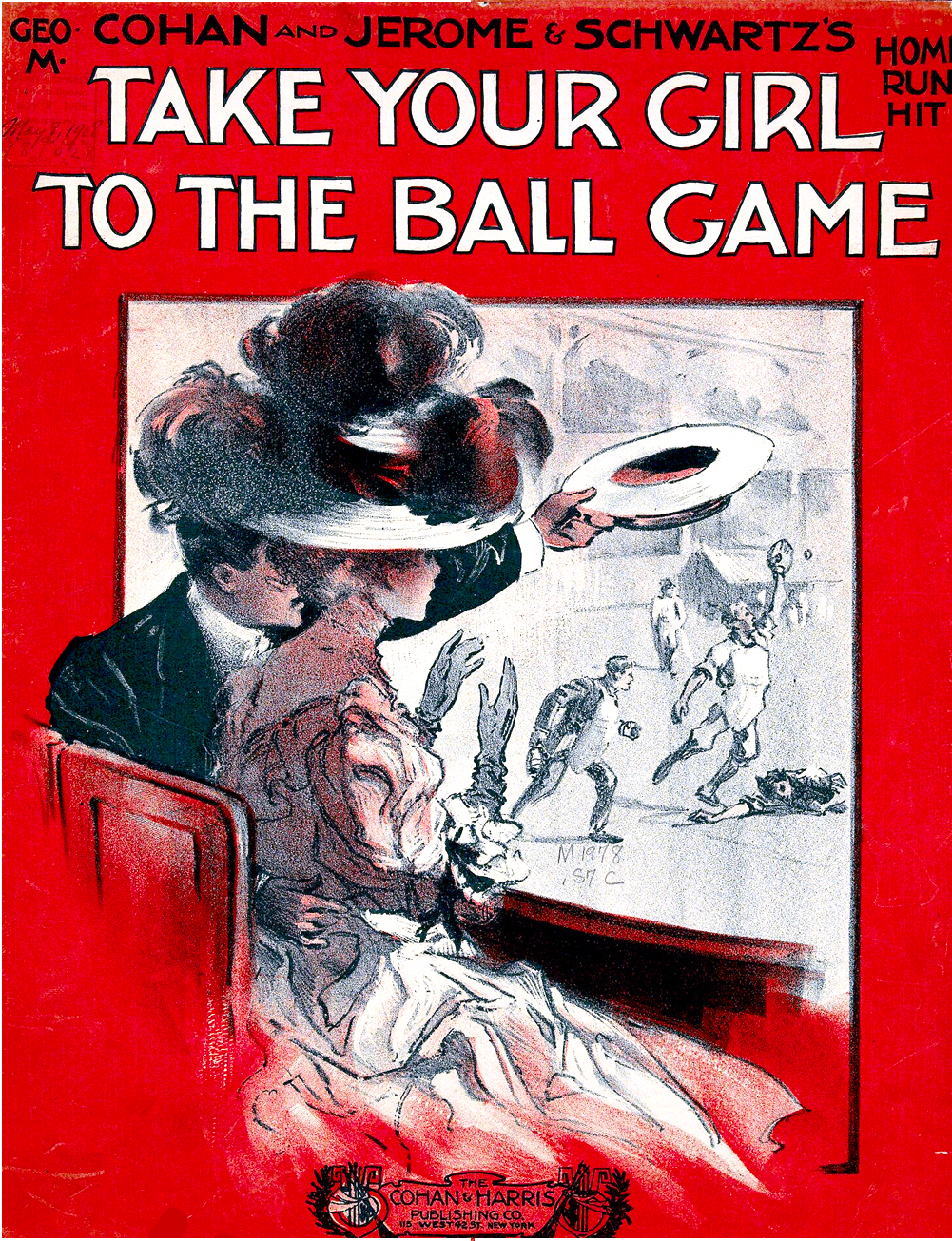 Verse 1
Coney Island’s all right,
It’s a fine place at night,
But the place that’s the money to me,
Is the park where they play,
Classy ball every day,
Talk of sport,
It’s the big Jubilee!
At the shout of “Play Ball”
I’m just daffy that’s all,
As I sit with my queen like a king,
With her score card in hand,
Mamie looks more than grand,
To the rooters around me I sing:

Chorus
Take your girl to the ball game,
Any old afternoon.
That’s the spot to propose to Mame,
The spot for a sunshiny spoon.
Make a fan of your steady girl,
If you lose her I’ll take all the blame.
In the stand, It’s just grand,
As she squeezes your hand,
At the base ball game.

TAKE ME OUT TO THE BALLGAME
Jack Norworth, Albert Von Tilzer
1908 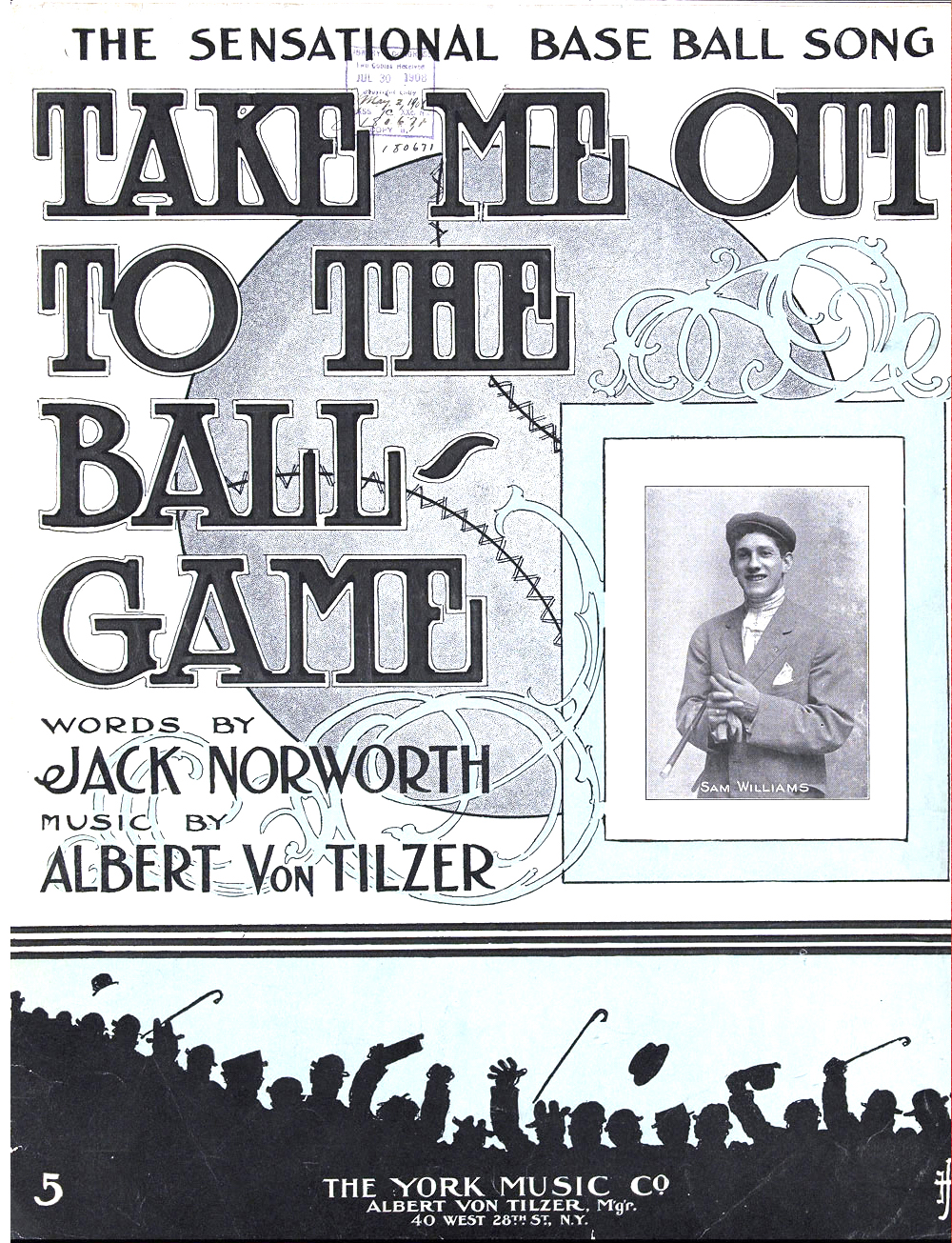 Katie Casey was baseball mad,
Had the fever and had it bad.
Just to root for the home town crew,
Every sou1
Katie blew.
On a Saturday her young beau
Called to see if she’d like to go
To see a show, but Miss Kate said “No,
I’ll tell you what you can do:”

Chorus
Take me out to the ball game,
Take me out with the crowd;
Buy me some peanuts and Cracker Jack,
I don’t care if I never get back.
Let me root, root, root for the home team,
If they don’t win, it’s a shame.
For it’s one, two, three strikes, you’re out,
At the old ball game.

Katie Casey saw all the games,
Knew the players by their first names.
Told the umpire he was wrong,
All along,
Good and strong.
When the score was just two to two,
Katie Casey knew what to do,
Just to cheer up the boys she knew,
She made the gang sing this song:

Chorus
Take me out to the ball game,
Take me out with the crowd;
Buy me some peanuts and Cracker Jack,
I don’t care if I never get back.
Let me root, root, root for the home team,
If they don’t win, it’s a shame.
For it’s one, two, three strikes, you’re out,
At the old ball game.

1 The term “sou,” a coin of French origin, was at the time common slang for a low-denomination coin. Later versions the words were changed to “Every cent, Katie spent”

Take Me Out To The Ball Game.
Haydn Quartet with Harry McDonough
Victor Records: 5570
September 9, 1908

This recording is often credited to Billy Murray and the Haydn Quartet even though Mr. Murray did not sing in it.

It was played at a ballpark for the first known time in 1934, at a high-school game in Los Angeles; it was played later that year during the fourth game of the 1934 World Series.

They gave a dinner last night to Jack Norworth, Brooklyn’s noted song composer, and he responded by singing some of his popular tunes.

The dinner at the Hotel George, attended by 400 friends of the vaudeville partner of the late Nora Hayes, climaxed the celebration of Norworth Day arranged by a committee headed by Joseph T. Sharkey, vice-chairman of the City Council. Earlier in the day Ebbets Field marked the celebration for the author of “Take Me Out to the Ball Game,” with a baseball game between the Brooklyn Dodgers and the Chicago Cubs.

Then came the entertainment. Norworth, lively for his years, strode from the dais to the stage and, with Mrs. Norworth accompanying him at the piano, regaled the guests with a few of the 2,000 songs he has composed.

He started with “Honey Boy,” his first composition, written in 1905. His voice was vibrant and clear. The audience applauded noisily as he ended song on a high note.

He sang “Smarty, Smarty, Smarty,” and this drew a round of applause. Nostalgia swept the room. The crowd wanted more of Norworth’s old tunes. He gave them “When It’s Apple Blossom Time in Normandy” and Good Evening, Caroline,” and had them join him lustily in singinging ‘Take Me Out to the Ball Game,” his hit of hits. He did the same with “Shine On, Harvest Moon.” 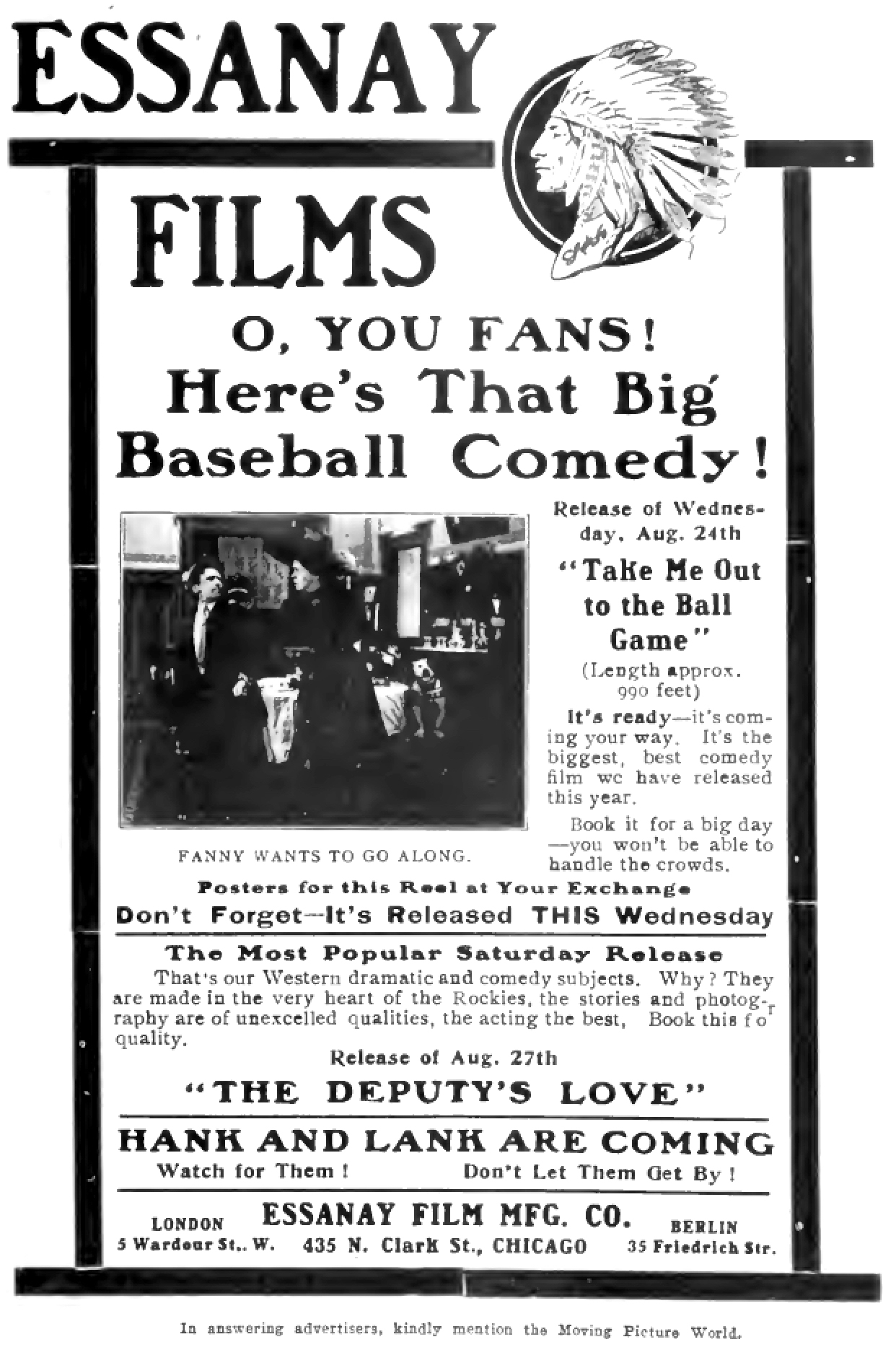 ESSANAY FILM MFG. CO.
TAKE ME OUT TO THE BALL GAME.—Our friend Blink is a baseball bug and a devotee of the sport. One day he finds he will have time in the afternoon to visit the ball park, and from that moment until noon he is in an excited fever, refusing to talk anything but baseball to the business men who call on him. When the clock strikes twelve Blink seizes his hat, slams down his desk and tells his stenographer that he is gone for the day.

Blink hurries home and gets his wife busy with the dinner. She is curious to know why he is in such a hurry and finally, between bites. he tells her he is going to the ball game. Fanny expresses her desire to go, also, and insists on her husband waiting for her to dress.

Minutes crawl by like hours to Blink as bis wife arrays herself for the game, and when she finally appears, leading Jack, the bull pup. he seizes her by the arm and drags her out of the house.

They board a car, but the conductor objects to the dog. Fanny pushes the conductor into a corner, and Jack makes short work of the seat hogs.

However, the ball park is readied at last, and Blink goes to get the tickets. When he comes back with the necessary paper he is in such a hurry and so happily excited as to grab the arm of another woman, a large, fat. colored “mammy,” and does not discover his mistake until they are inside.

Now he has to buy another ticket, and after he has located Fanny and the dog they hurry into the gate and to the bleachers.

The game is an exciting one, but not for Fanny. She sees nothing in it at all, and finally dozes off to sleep with her head resting on a fat man’s shoulder. Jack, the pup, becomes excited or angered at a rather shady decision by the umpire, and freeing himself from his chain chases the luckless referee all over the diamond.

The home team wins, of course, which makes Blink so happy that he goes off. forgetting Fanny. He follows the band of players on their triumphal procession downtown, and arrives at his home before he thinks of his missing spouse.

In the meantime. Fanny has slept peacefully at the game, and is deserted by her fat man. She is finally the only one left on the bleachers, but is soon awakened by a ball park guard.

She meets Blink half way home, and there is the usual family row, which ends peacefully, however, at the close of the film.

From “Holy Cow!” by Bob Verdi

Harry Caray, who is credited with singing it first at a ball game in 1971, once said, “I would always sing it, because I think it’s the only song I knew the words to!”

On Opening Day in 1976 Bill Veeck noticed the fans were singing along with Caray so a secret microphone was placed in the broadcast booth the following day to allow ALL the fans to hear him. Veeck explained to Caray,

Harry, anybody in the ballpark hearing you sing “Take Me Out to the Ball Game” knows that he can sing as well as you can. Probably better than you can. So he or she sings along. Hell, if you had a good singing voice you’d intimidate them, and nobody would join in!

This video is from my personal collection. I had season tickets (Weekend Plan) was able to convince the camera guy to move his camera during every seventh inning stretch—Member of the Real Jimmy Piersall Fan Club).