HE FEEDS THEM ALL

POOR ARE HIS GUESTS.

Hundreds of Hungry Men and Boys Given Food.

WAIFS OWN THE TABLES.

What They Think of Their Generous Benefactor.

It was a happy scene last night and a tearful one at I. Woolf & Co.’s clothing store, Halsted and West Madison streets, when upward of 10,000 of the city’s poor sat down to a regular old-fashioned Thanksgiving dinner, and with full hearts and fuller stomachs expressed their gratitude to providence and Mr. Woolf for the spread.

It was the thirteenth of the so-called newsboys’ dinner given by the house, but this year it was not strictly a newsboys’ affair, nor was it an event limited to the waifs. A general invitation was issued to all the poor of Chicago, irrespective of age, race, or color, and the gathering was a notable one, not merely from its size, but from the strange assemblage of unique characters. Dirty-faced little urchins of the alleys, who talked slang and ate with their fingers, sat side by side with impoverished men of culture, who said “please” and “thank you” and fed themselves with a fork. Haggard and sickly mothers were there with their mere tots of children. Gray-haired men and women came and brokenly offered a half apology for their presence. Guests who spoke English in passing pie and celery were thanked in German, and over the way some one asked “Have a banan?” and got the answer, “Bet yer life, Cully.” 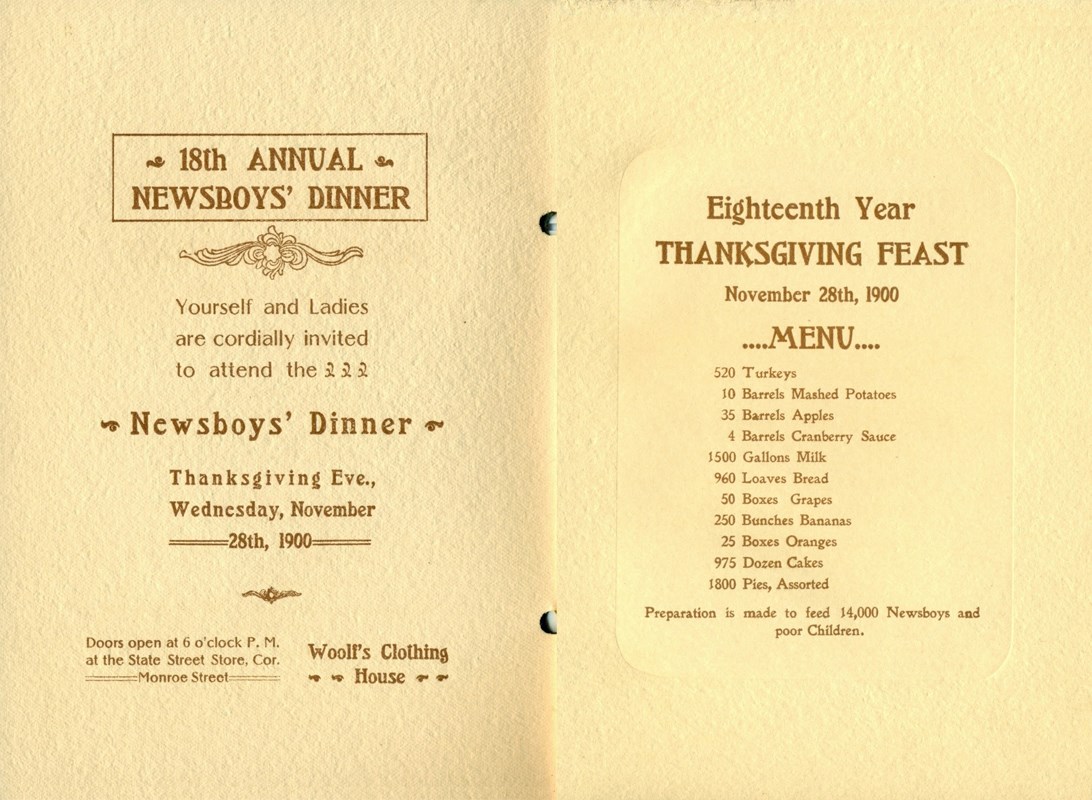 Crowds Are Thick.
By 6 o’clock—the hour set for the meal—fully 5,000 people surged about the doors of the clothing house. A dozen policemen kept order as well as they could, and wondered where all the people came from. After several “shifts” have been admitted at the side door and passed, fully satisfied—some called themselves cold-storage houses—out at the front, there seemed little diminution in the host of would-be banqueters. It was fully 11 o’clock when all were fed and sent away happy.

A tempting repast it was, too, to which they were admitted. The goods had been stored away, and the counters removed from the central part of the main floor. In their place was a triple row of specially constructed tables, neatly covered with marbled oilcloth. In each if the three front windows was a similar table. All were decorated with vases of flowers, and in addition there were pyramids of cakes and festoons of fruit. Plates were laid for 1,000, and they were laid with as much precision and with as much artistic effect as in a first-class hotel. Turkeys ready for the knife, were placed at intervals down the tables, and—this was a point specially commended by the guests—everything was within reach. One hundred and two clerks, with white aprons and jackets, did the bidding of the motley crowd.

That crowd was a crowd of epicures—for a day. It was their feast and they made it known. All Mr. Woolf had to do was to furnish the food and service and foot the bills. Of course the tables in the windows were the posts of honor and the elite of the newsboys’ circle aspired for the seats. Turkey, they thought, would taste better if they could eat it while making faces at the throng who watched with hungry eyes and watering mouths without.

Has a Monster Menu/
The menu was one of heroic size. One had to see the outlay to grasp its proportions. From the following all the et ceteras are eliminated:

In local waifdom Mr. Woolf was the most popular man in Chicago last night. An informal meeting of representative waifs and newsboys was held in the big hours of the night, and “Swipes” Brown moved a vote of thanks to Mr. Woolf. The vote was unanimous, but will not be engrossed.

“Kids,” said a local celebrity, “dat was a great blow-out,” holding his sides. “Almost a bust-out. Criticisms not in order. It won’t be ‘lowed. It was a feast fit fer de gods—who, who said anything about galleries? Niothin’s too good for us kids of de street, and”—the police sang out, “Move on.” 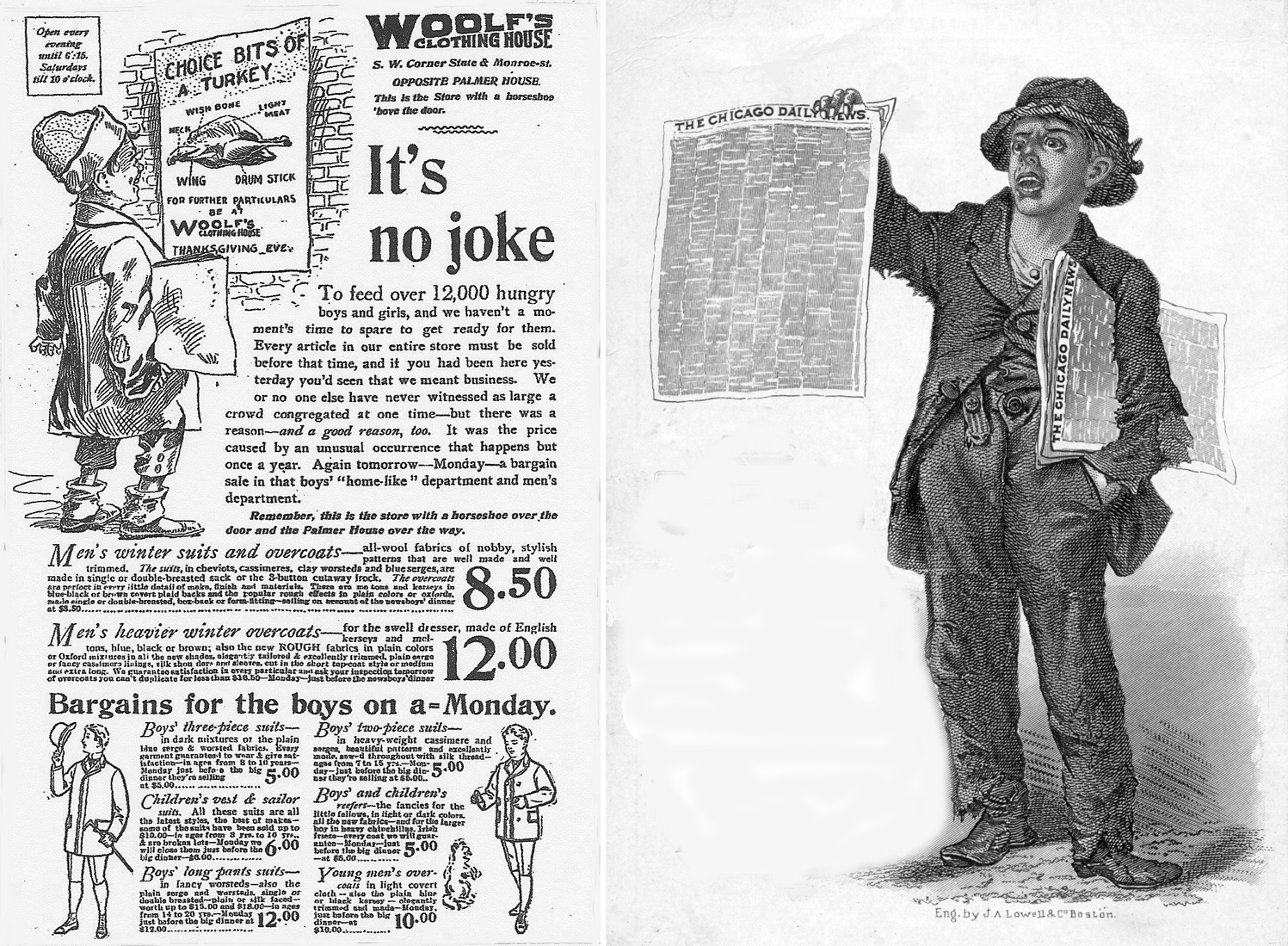 Among the many remarkable merchants of State Street, Chicago’s famous business center, there are few who can point to a greater and more successful accomplishment than Isaac Woolf, founder of the large clothing house of the same name, and who rose from newsboy to merchant prince.

Proud as he is of his achievement, Mr. Woolf is a bit too modest to talk about himself, and it was only after considerable entreaty that a reporter of the Staats-Zeitung was able to gather a few facts about his life.

Some twenty years ago Woolf started his career as a newsboy. Insignificant as this beginning may seem, Woolf’s strong will enabled him to start the Woolf Clothing Company on the corner of Halsted and Madison streets. True, it was a modest beginning, – no indication whatsoever of future development. Yet, a keen observer, had there been one around, would have noticed in that 2modest beginning the seed of a large enterprise of the future.

Woolf was a firm believer in the policy that a customer is always right, and he spared no effort to prove it. He was always present and enjoyed a bit of conversation with his customers, a habit which made him many a friend. It is doubtful whether a man can be found in Chicago today, who has more friends than Woolf among all classes of the city’s population.

For seventeen years, since he established his business, Woolf has never failed to give an annual Thanksgiving dinner to the newsboys, and this one act alone may have a great deal to do with his popularity among those who know him. This dinner, one might say, is an integral part of his business and grows with it, becoming increasingly important to the ever spreading army of homeless, hungry newsboys. Every Thanksgiving day. Mr. Woolf takes great delight in seeing to it that none leave his store without having partaken from a large brown turkey and other delicacies.

For the newsboy, Woolf’s day, as this day is called, is the most important event of the year. And rightly so, if we consider the fact that Woolf’s latest Thanksgiving dinner was a huge affair in which 12,000 people ate. Just imagine a man who shares what he has with 12,000 youngsters, and it will dawn upon you why “Ikey” Woolf, the newsboy, became the towering merchant prince.

Two years ago Woolf moved his store to State Street, and this change gave rise to considerable confusion among his old customers and friends, who mistook Sol Woolf’s place at Jackson and State for his store due to the similarity in the names. The Woolf-Clothing Company overcame this difficulty by buying Sol Woolf’s stock at a 50% reduction and offering it to the public at purchase price. This, of course, was a business transaction that made the Woolf Clothing Company very popular among State Street shoppers, a popularity which it enjoys to this day.

In November last the company disposed of its store at Madison and Halsted streets, where the business was originally started by Isaac Woolf a quarter of a century ago, to Solomon & Simons, an Iowa firm, for $42,500 cash. A two days’ sale realized $2,500, and the $45,000, it was stated, was paid to credit ors. Since the death of Isaac Woolf it was said In various quarters the business of the company has not made the progress which his personal attention brought about.

Isaac Woolf was known as the newsboys’ friend because he provided a Thanksgiving dinner for them. He provided a fund for their annual dinner after his death and the newsboys got their Thanksgiving dinner in 1907. hut there was no feast for them this year. It was said that the company had not been able to secure a suitable place to hold the dinner.

The Chicago Reoord-Herald, commenting on the failure, said in part:

The financial depression of a year ago, together with the loss of the directing hand of the company’s founder. Isaac Woolf, are blamed for the failure. It Is said the company has been financially involved for more than a year, and that efforts to bridge the difficulties, according to the creditors’ lawyers, have been in vain. 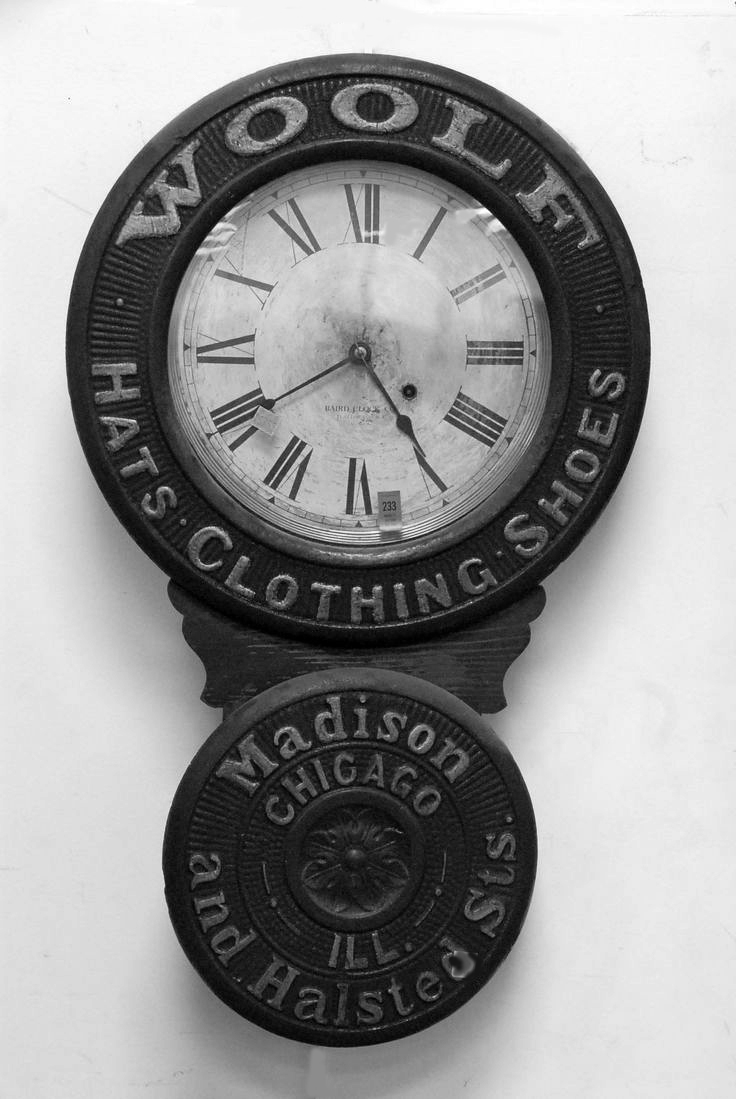 As Thanksgiving approaches, government agencies, religious groups and social service organizations make an extra effort to make sure everybody has a good meal on the holiday. Businesses pitch in too, providing much-needed services and rallying their employees to the cause.

In the early 1800s, it was a lone clothier, Isaac Woolf, who answered the call. The beneficiary of his amazing generosity was the army of street urchins who hawked newspapers and shined shoes. Woolf was born in London but immigrated to the U.S. and grew up in Lafayette, Ind., where he helped his parents by working as a newsboy.

The city streets teemed with newsboys and girls, ragpickers and bootblacks, as the shoeshiners were called. Some of these children, who could be as young as 4 or 5, were orphans but many came from poor families who needed every penny they could earn.

Woolf served 100 children at his first dinner in 1883 at his store’s original location at Madison Avenue and Halsted Street. (In 1895, he opened a downtown store at the southwest corner of State and Monroe streets, where it was famous for a huge horseshoe arching over the door.) In 1888, he fed 2,500 children. In 1892, he served 4,000. The store was cleared out to make room for tables, which could seat 400 at a time. A special police detail handled the crowd and managed shift changes. In 1895, under the headline, “He Feeds Them All,” the Tribune related how Woolf opened up the dinner to the general public, and “upward of 10,000” were served. The paper reported that 400 turkeys were eaten, along with eight barrels of mashed potatoes and 1,000 gallons of milk.

Then tragedy struck. In October 1906, Woolf died unexpectedly. He was 54. His brother, Benjamin, managed to pull off the 25th anniversary newsboys’ dinner the next month, and even the 26th annual in 1907, but that was it. Woolf’s Clothiers went bankrupt in 1908.

Each of those waifs, urchins and newsies considered Isaac Woolf their personal friend, the Tribune reported. It was common for the kids to offer up “three cheers” for him at the end of the meals, and one year, this call and response:

“What’s the matter with Woolf?”