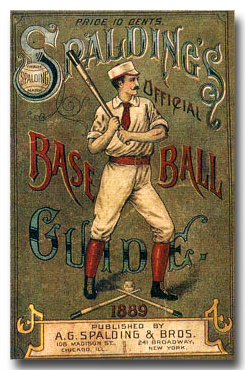 Chicagology has just added baseball to its archives. Many Chicagoans are aware of the modern day history of their Chicago ball clubs. The famous Crosstown Series of 1906 in which the powerful Cubs were over matched by the Hitless Wonders of the south side, the infamous Black Sox scandal of 1919 in which under-paid players were taunted with new homes and cash for throwing the World Series are just a couple episodes.

Well, what about the early part of the game? When baseball was just a baby and players would leave the game to start a new business, like A. G. Spalding. The rules were changing every year, and sometimes even in mid-game! Even though the game that was played in the 1800’s was not the same game played when Ruth and company joined the party, but it was a very interesting time and it is Chicagology’s job to provide a little insight as to what base-ball was like during these formulative years using sources from the actual period. They even spelled it differently!