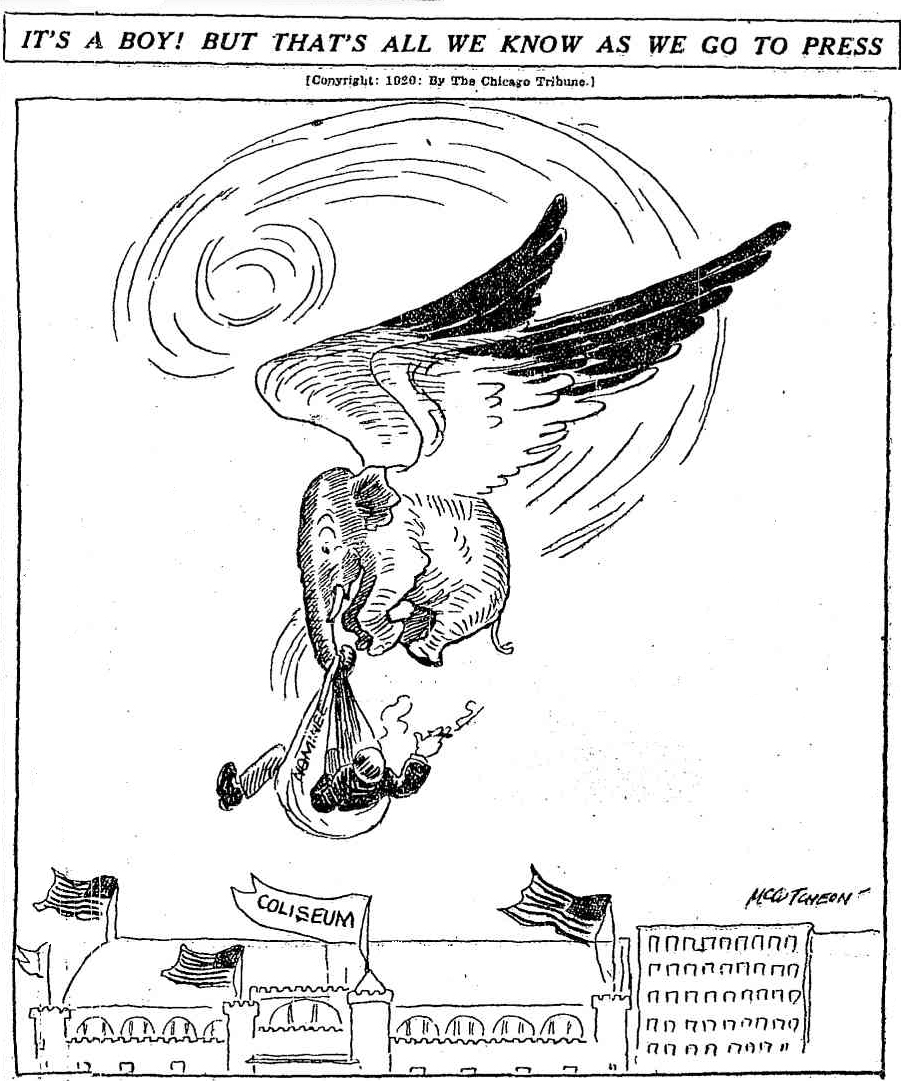 Wood Sticks to the Last.

Warren G. Harding, United States senator from Ohio, was nominated for president and Calvin Coolidge, governor of Massachusetts, was named for vice president by the Republican national convention last night.

The choice of Senator Harding was effected on the tenth ballot of the cese vention and the sixth roll call of the two sessions held yesterday. The impossibility of nominating either Gen. Wood or Gov. Lowden was demonstrated in the first of these sessions.

Gen. Wood went down fighting desperately to the last, but overwhelmed by the coalition of all his opponents under the Harding banner. Gov. Lowden, though he had forged ahead of Wood at the morning session, found his strength like that of the general, receding, and, realizing that his continuance in the contest would only prolong the deadlock, released his delegates, most of whom went to Harding and accomplished his nomination.

Michigan Makes It Sure.
The nomination of Harding was made a certainty shortly after 6 o clock, when Michigan gave him twen- ty-four votes. On.the ninth ballot he was 118% votes short of the majority of 493. On the tenth ballot his gains totaled 129 by the time Michigan had swung Into line and his nomination’ was assured even If no further gains. were made from the states yet to vote.

Harding would have been nomi- nated even without a single delegate from Pennsylvania, which had not voted, for him up to this time, but the Pennsylvanians saw the bandwagon coming and determined to clamber aboard without further delay. Penn- sylvania swung sixty votes to Hard Ing at 6:14 p. m., making the total for the candidate at that time 52?. and the ensuing pandemonium heralded his nomination as an accomplished fact.

The result of the complete roll call on the tenth and final ballot was:

Former Senator Flint of California. a Johnson delegate, moved to make the nomination of Harding unanimous, and, seconded by Congressman Frank L. Smith of Illinois, on behalf of Lowden. It was adopted over the protests of the twenty-four La Follette delegates from Wisconsin, amid a tumult of boding by the remainder of the conven tion.

The Wisconsin disaffection Was widely regarded as an indication that La Follette may refuse to support the ticket If he does not actually bolt and join a third party.

On the question of supporting the ticket Senator Borah was noncommittal last night. Senator Johnson declined to reveal his attitude until he had conferred with the members of the California delegation. He held the conference and is still noncommittal. But It was generally assumed that he would not repudiate the assurances he gave during the primary campaign that he would not bolt the ticket.

Senator Harding was In the head- quarters of the national committee In the Coliseum annex when he was – nated. He was talking with Dr. Nicho- las Murray Butler, New Yorks candi date for the nomination, when Charles B. Warren of Michigan burst Into the room and, seizing Senator Harding’s hand, exclaimed:

Senator, you are nominated!

Traditions Are Shattered.
Traditions were shattered In the -choice of Hardihg. HavinfAij st%~!& one of the leading co ..^U bsr -.._ months ago, but he partici-

Indiana-and was widely r4aCt us I having been eliminated by his Goirb tV7 capture the solid delegation of his state and by the fact that he ran fourth in Indiana.

Senator Harding came to Chicago a week ago with no better prospect of consideration than that of a “dark horse.” But fate was working secret- ly in his favor.

Opposed tb Wood.
The party elements represented by Ut majority of the national committee were opposed to Wood for a variety of reasons, among them being the belief that he would be a vulnerable candi- (late because large business interests lad, contributed $1,500,000 to his cam- paign and because of the cry of “mili- ” which the Democrats would raise against a soldier nominee.

The national committee crowd pre- ferred Lowden and the nomination Of -he governor appeared to be a. foregone conclusion when the confessions of the two Missouri delegates that they had pocketed $5.000 of Lowden money hit ids candidacy like a lightning bolt. The cry that Lowden also would make a vulnerable candidate was raised and capitalized by his opponents. 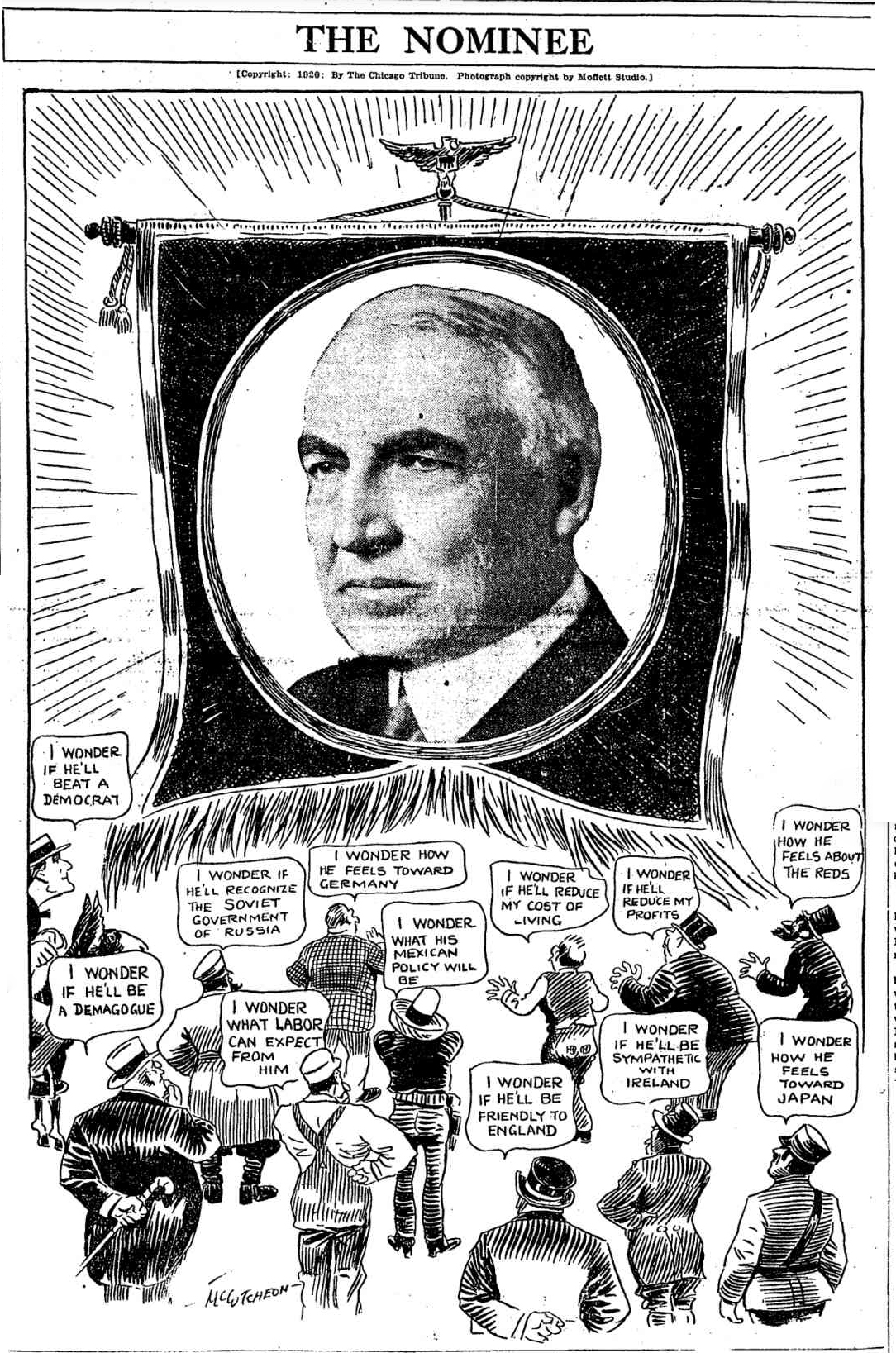 Opportunity Is Seized.
The opportunity presented was seized by the friends of Harding, headed by the “senate crowd.” Harding. had come through the vicissitudes of the primary campaign with reputation . He had made few enemies. Though affiliated with the conservative was not unacceptable to the progressives.

He had made an admirable record in the senate. He had voted for woman suffrage and for the treaty with the Lodge reservations. and his vote for prohibition was regarded an instead of a liability. I

He was put forward as the best can- didate the party could nominate, and the elements opposing Wood and Low-

den got Into line for Harding as the; result of the conferences hold Friday night and during the recess between the morning and afternoon sessions of the convention yesterday.

The four ballots of the morning ses- sion showed that both Wood and Low- den had been halted and were weaken- Ing. The Johnson strength was – ing also, while Harding was gaining on every call of the roll. Still there was a possibility that the deadlock could not be broken unless either Wood or Lowden should retire from the contest. So the convention took a recess from 1:30 to 4 p. m. to afford an opportunity for negotiations- It was then that Gov. Lowden resolved to break the deadlock and announced release of his delegates.

The leaders were then convinced that Harding could be nominated at the afternoon session, and the selection of

he vice presidential candidate was un- -r consideration. Harding himself had lied on Senator Johnson during the and was reported to have him to take second place on the and In any event to assure him ;is good will. Johnson declined to take he nomination for vice president..

When the convention reconvened the roll was called for the ninth time, and the Harding boomers lost no time in getting into action. Connecticult start ed the ball rolling by switching thir- teen Lowden votes to Harding. Illi- nois stood pat on Lowden and John. son, but when Kansas vas 1 the entire Sunflower state delegation; Instructed for Wood, was plumped for Harding.

The-Kansans seized their delegation standard and started on a parade of the hall, escorting a banner bearing a picture of Harding. – The sensational leap for the band wagon performed by the delegation which placed Gen. Wood in nomination attracted universal at- tention, and the move was generally thought to be a prearranged signal for the inauguration of a Harding stam- pede.

The next sensation was produced when Kentucky was reached on the roll call and A. T. Hert, floor manager for Lowden. announced:

The action of Hert signalized the elimination of Lowden: New York threw sixty-six votes to Harding, but Pennsylvania stood pat for Sproul. The Ohioan had left both Wood and Lowden far In the rear, but he was 118% votes short of a majority when the ninth roll call was finished.

It was realized on all sides that

Harding would go over the top on the | next roll call, and the utmost contusion reigned on the floor as the delegates made their preparations to jump on the band wagon.

On the tenth and final roll call Illi- nois split up and twenty-two and one- Iifth votes were delivered to Harding with Gov. Lowden’s consent. He had known for several hours that his nom- ination was impossible and he had turned in to Warren Harding. There were seventeen Illinois men, however, who stilt Voted for Lowden, and eighteen and four-fifths votes were cast for Johnson.

Indiana split up and delivered twen- ty-two of its thirty to Harding, and immediately thereafter Iowa went bodily from Lowden to the Ohio sen- ator. Michigan split, giving twenty- five to Harding.

Then New York cast sixty-eight for Harding and his victory was almost within his grasp.

There was a big demonstration of enthusiasm for the candidate in the making when his own state, Ohio, voted for him solidly for the first time. Of -_.t-eight Ohio delegates, nine had been voting their instructions -or C;en. Wood. Four others had deserted Harding on an earlier ballot, but they came back and were joined by the nine instructed Wood men.

It had been noised about after the ballot that Gov. SprouJ had re- leased the Pennsylvania delegation from obligation to vote for him; and whren the Keuvstone state was reached *:~e s-. knew Harding was about to reach the goal. Pennsylvania delivered sixty votes to Harding, and an outburst of cheers shook the raft- ers, signalizing the fact that this ac- cession had given the candidate more than a majority and consummated the nomination.

When the jubilation was over the outcome was stilled by Chairman Lodge’s gavel, the callIng of the roll was quickly completed, and the nomi- nation of Harding officially announced.

Then followed the nomination of the candidate for vice president and the adjournment of the convention sine die at 7:32 p. m.

The drift to Harding developed as soon as the convention met In the morning and resumed balloting. There were four ballots in the first session of the day and Harding gained steadily.