MEDINAH ATHLETIC CLUB building, at 505 N. Michigan avenue, on the northeast corner of E. Illinois street, was later the Chicago Towers building, and then the Continental Hotel. It is now the Sheraton Hotel. It was finished in 1929. Walter W. Ahlschlager was the architect and Frank A. Randall the structural engineer. The building is 45 stories high, with two basements, on rock caissons. The building cost $7,000,000. 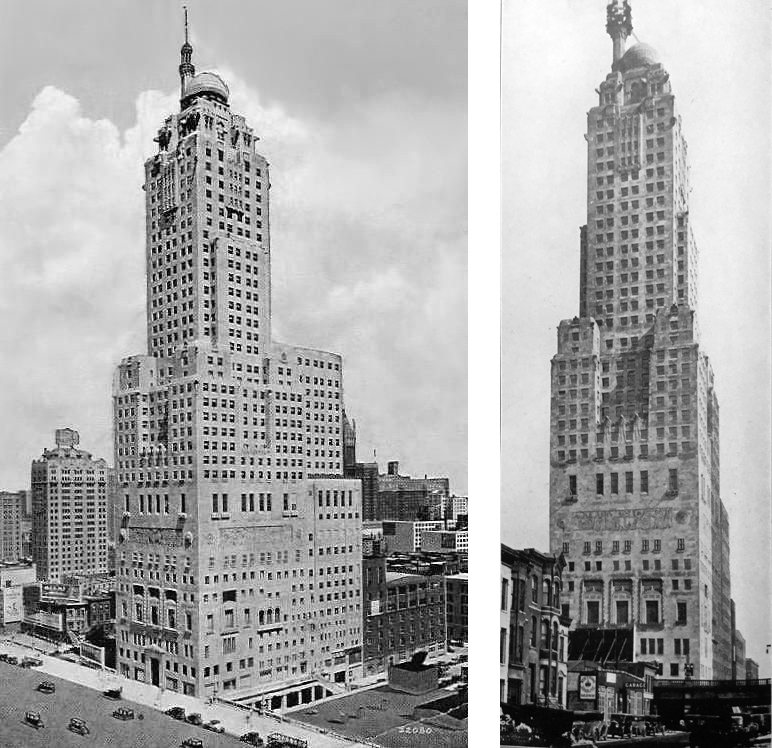 On December 10, 1927, an excited young man, seeing Mayor Bill Thompson at Michigan Boulevard and Illinois street with a shovel in his hand and about to start digging, ran across the street shouting: “Look! It’;s Big Bill starting the subway.”

“Starting the subway?” asked someone nearer the mayor. “Not yet. That’s coming later.”

Mr. Thompson was breaking ground for the new Medinah Athletic Club of which he was a member, to be erected at the Michigan and Illinois corner.Membership was restricted to Shriners, which at the time, was at 3,000.

The cornerstone of the Medinah Athletic Club was laid on November 5, 1928. In a ceremony held that day, a copper box was placed within the cornerstone to commemorate the occasion. Filled with records of their organization, photographs of its members, a copy of the November 22, 1925 Chicago Tribune announcing the proposal of the building, coins, and other historic data, this time capsule remains sealed within the hotel’s limestone exterior. 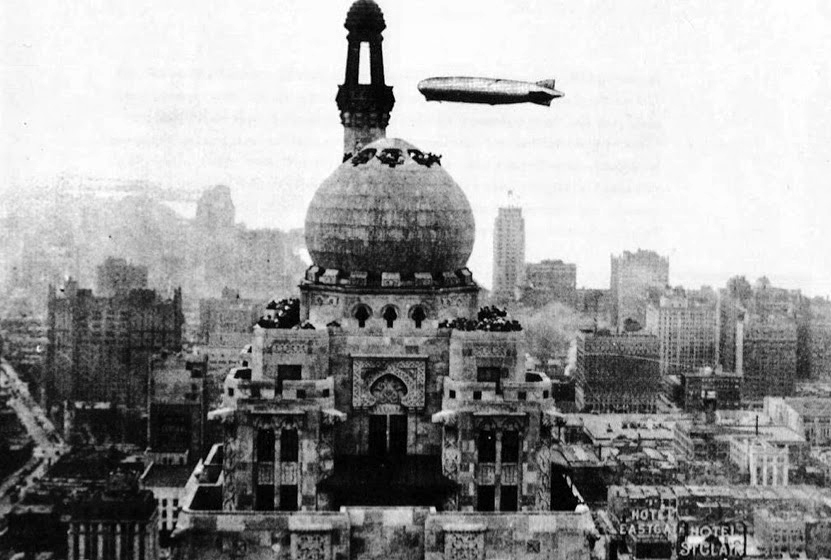 The exotic gold dome, which is Moorish in influence, originated as part of a decorative docking port for dirigibles before the Hindenburg disaster changed the country’s mind about the future of travel by blimp.
1930

Just about one year ago yesterday Chicago Shriners were gazing down into a deep and capacious hole at the northeast corner of Michigan avenue and Illinois. Now they’re looking up at Chicago’s ultimate in clubhouses, the new Medinah Athletic—approximately $8,000,000 worth of it—on the same site. And tomorrow they will be invited to enter in and take possession.

Scattered groups of workmen were hustling and bustling yesterday throughout the fourteen floors of club rooms, sawing and hammering and planing, painting and repainting walls and ceilings and exquisite oil pieces. But the motto for Monday is “Service in every department,” and service, according to John S. Fee, manager, there will be.

Lavish Art Work.
With fourteen floors of the magnificent structure to investigate, however, each with its own multitude of attractions, probably few if any of the 3,500 members will halt long enough for service of any kind. The remaining floors are given over to luxurious living quarters, many of which are already occupied.

Art work throughout the clubhouse is so lavish, and of such richness as to surpass anything of a like nature in the city. Each of the fourteen floors is designed by the architect, Walter W. Ahlschlager, who has emphasized spaciousness everywhere. Murals on paneled walls in lounges and hallways, and ceiling designs are done in oil, by hand, in colors often resembling the tones and patterns of luxurious rugs. Each design is different.

Huge steel beams supporting the ceilings of the grills are noteworthy for the materials used—steel worked over with plaster and stained to simulate wood so perfectly that they appear ponderous and ancient timbers. One member on a trip of inspection complained that the beams looked “too rotten to be safe.”

Leather Soundproof Doors.
Private dining rooms are divided by folding doors made of two layers of heavy leather that fold up with a caterpillar motion when it is desired to open the entire suite for a dinner. These doors are soundproof when closed.

E. A. Halverson, formerly a national diving champion, is in charge of the pool on the thirteenth floor, one of the largest and finest in the city, and S. P. Coombs is the director of athletics in the adjacent gymnasium.

H. O. Crippen of the membership committee cites an indoor rifle range as one of the popular attractions, together with a bowling alley constructed with soundproof walls. 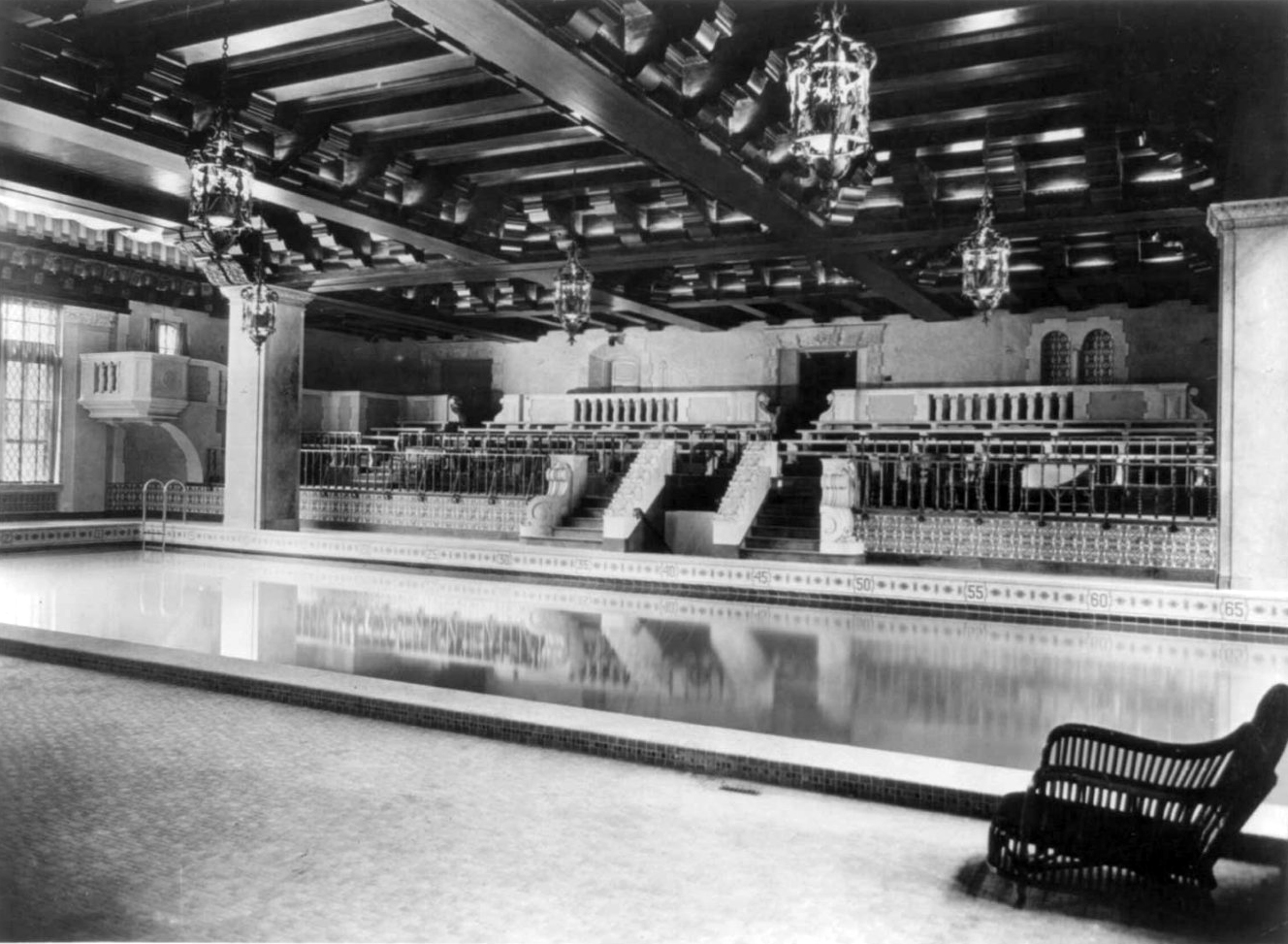 Swimming Pool
Known as the Johnny Weismuller pool, a testament to the famous Olympic athlete and actor who trained in its waters.
1929 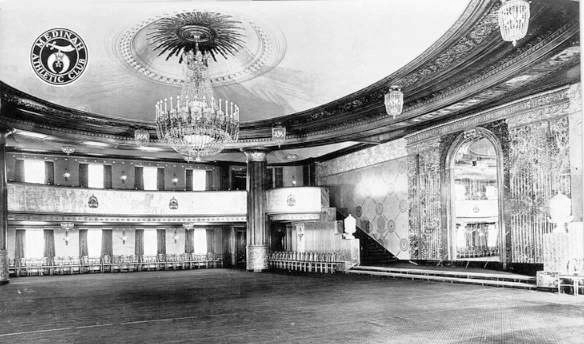 Grand Ballroom
The elegant Grand Ballroom, a two-story, 100-foot elliptical space, was decorated with ornaments in Egyptian, Assyrian, and Greek styles and was surrounded by a horseshoe-shaped mezzanine. In its center hung a 12,000-pound Baccarat crystal chandelier, the largest in North America.
1929

When the club finally opened, it was criticized by many for its “wasteful extravagance,” although in time it’s eclectic mix of multicultural styles would become widely recognized as a genuine historical treasure. With only 32 percent occupancy upon its opening, many saw this elaborate fortress of excess as overly decadent, but it never failed to keep the architectural community talking.

Although October 29th of that year would become known as the “Blackest Day in Stock Market History,” it would be another four years before the effects of this financial disaster would force the Shriners to file for bankruptcy. In 1934 they lost their beloved clubhouse, and in the decade that followed the building went through various incarnations, including a brief stint as residential apartments. In 1944 it began its life as a hotel, debuting as the Continental Hotel and Town Club, where Esther Williams would swim in the now famous pool. Subsequently it would operate under both the Sheraton and Radisson hotel chains. In 1961 the Sheraton expanded, adding a second tower just north of the existing building and bringing the northern boundary of the hotel all the way to Grand Avenue. During this era, the hotel featured an outlet of the popular Polynesian themed Kon Tiki Ports restaurant chain. A facade of lava rock adorned the northern wall along Grand Avenue, where today only a small section remains visible, tucked at the end of the balcony of Zest’s outdoor café. When the Radisson’s contract ended in 1983, the hotel’s name was changed back once again to the Continental. It would remain open for only three more years before finally closing its doors in anticipation of major remodeling and restoration.

In 1989, Intercontinental Hotels and Resorts purchased the property outright and completed the first phase of extensive renovations prior to it’s grand re-opening in 1990.